A resident in a beachside Melbourne suburb is so fed up with the derelict and abandoned shopfronts lining a main road, they have pasted a sign on one demanding that landlords be forced to pay a new tax.

The sign taped on a St Kilda shop window called out the owners, calling for a ‘vacant premises tax’ for those who neglect their buildings.

Pictures of the former takeaway shop posted to Reddit reveal debris and rubbish strewn about inside.

There are tipped over chairs, tables stacked on one another, rubble and a sagging ceiling making the place look dangerous to enter. 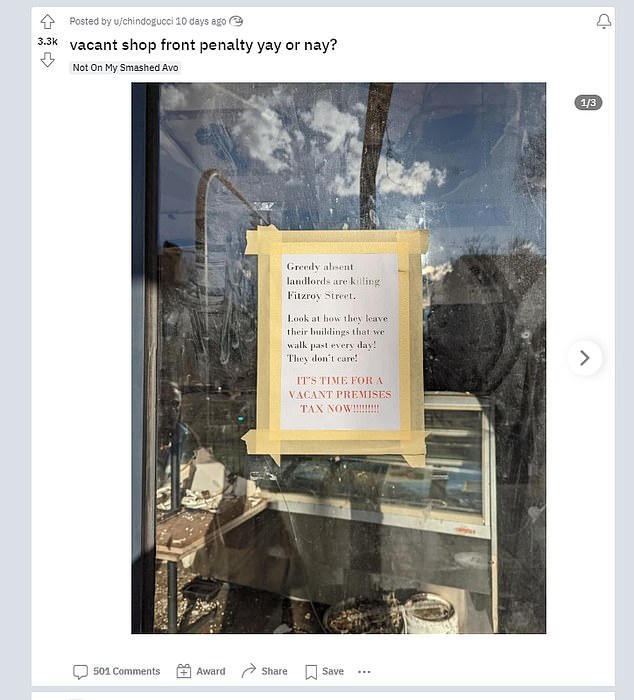 Last week’s post on Reddit demanding landlords to be taxed (pictured) sparked debate on commercial property owners and tenants in the area, with some saying the owners are greedy, while others arguing they have enough tax to pay 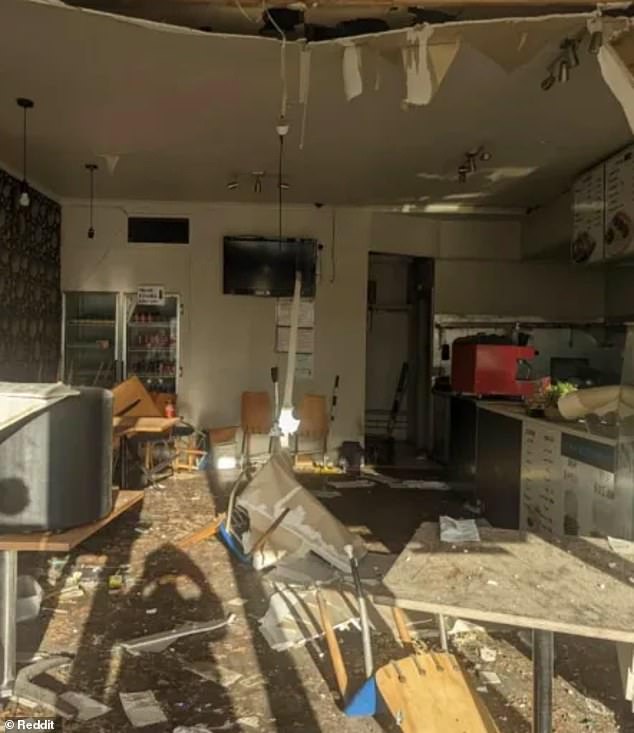 The tipped over chairs, tables stacked on one another, rubble and a sagging ceiling makes the place (pictured) look dangerous to enter 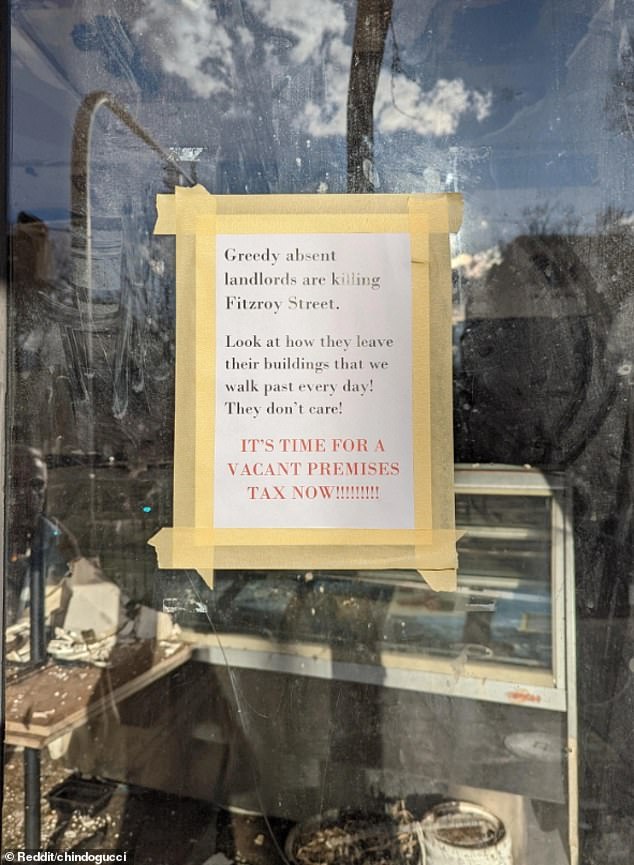 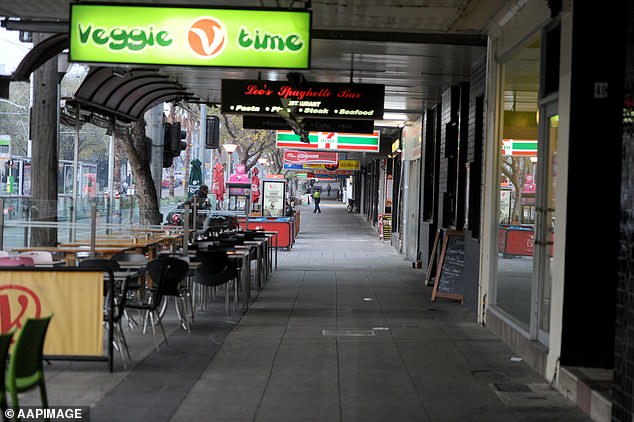 ‘Greedy, absent landlords are killing Fitzroy Street,’ the sign on the shopfront read.

‘Look at how they leave their buildings that we walk past every day! They don’t care!

The social media post sparked a debate on the state of the suburb and street, with one saying, ‘St Kilda has lost its vibe’.

‘This is how slums are born,’ another commenter wrote about the state of the shop, with a St Kilda resident keen on the tax, calling owners ‘mad greedy’.

A former South Yarra café owner wrote about their experience with landlords, saying they were ‘the greediest’.

‘It got to a point where our rent was 75 per cent of our fixed costs. At the end of a five year term, enough was enough,’ they said.

‘The rent was being raised to the point we really didn’t believe it was market rate as there were so many empty shops around us being leased out for much less along Toorak Rd and Chapel St.’

The commenter said they fought against the rent increases and won, which led to their rent being decreased.

Yet others took the side of the shop owners struggling to get tenants signed up, with another saying the tax was a ‘dumb idea’. 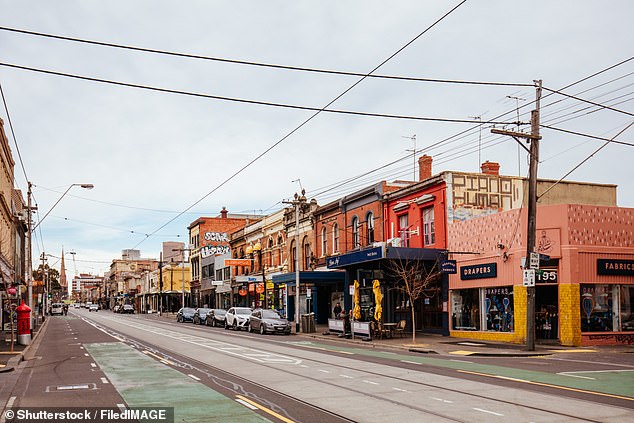 Real Estate Institute of Victoria President Richard Simpson said tenants are cautious about starting up a business due to the rising interest rates and said the vacant tax was ‘way over the top’ (pictured, Brunswick Street in Melbourne in June 2020)

Another said not having tenants was punishment enough for the embattled owners.

Real Estate Institute of Victoria denied landlords were scalping and had enough on their plate.

Mr Simpson said tenants are cautious about starting up a business due to rising interest rates and said the vacant tax was ‘way over the top’.

‘But I think landlords do owe the community a duty to keep their empty shops presentable,’ Mr Simpson said.

Meanwhile, social media buzz kept rolling with one commenter writing Fitzroy street below Canterbury road ‘has been a mess for years, well before covid.’

A comment from a year ago showed Melburnians lamenting St Kilda as a shell of the once ‘vibrant, quirky and fun’ community it was.

‘Fitzroy street has been trashed and the businesses look so down trodden and derelict. Homeless are everywhere etc. it feels unsafe,’ they wrote. 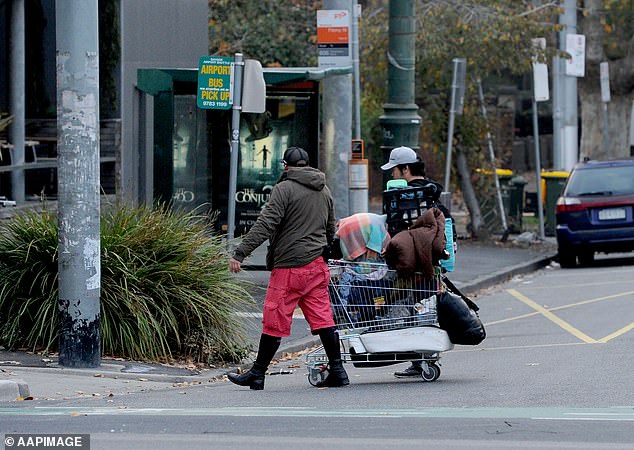 Social media buzz from a year ago showed Melburnians lamenting St Kilda as a shell of the once ‘vibrant, quirky and fun’ community it was

German health minister is ‘fighting for his career’