Donald Trump on Tuesday night accused the January 6 Congressional committee of persecuting ‘patriots’, and said they were not looking into the problem posed by Antifa.

‘Our country focuses on so many of these fake investigations. And we don’t focus on greatness any longer,’ he told Hannity.

‘Everything is an investigation.

‘This unselect committee – they are treating people horribly.

‘They go after many, many people who are patriots.’

He said many involved in the January 6 riots were Antifa.

‘But they don’t want to cover that.’

He said: ‘You take a look at the crime in these Democrat-run cities, it’s incredible.’ 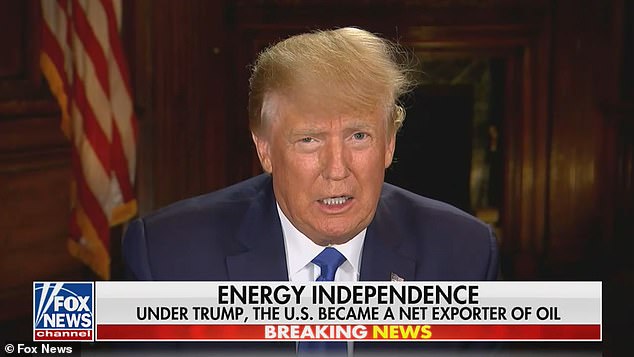 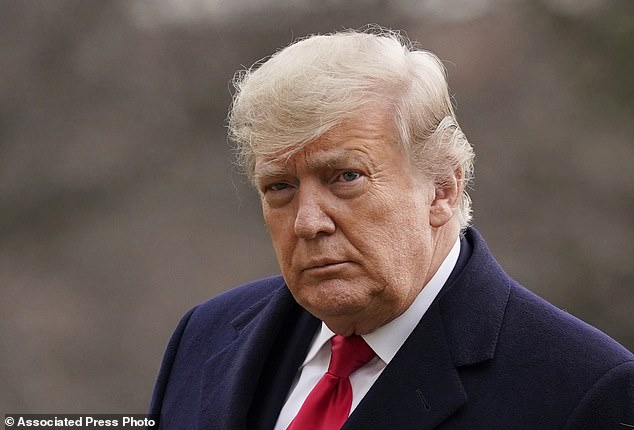 Trump, pictured on December 31, 2020, is weighing up a new run at the White House

Asked what he would do if he were re-elected, Trump told Hannity he would finish what he started.

‘There are many things I would complete,’ he said, mentioning the border wall and trade deals with Europe.

‘I had to waste a lot of time with fake investigations.’

He said ‘almost all’ media were trying to retract their news stories about the Russia interference in the election, and called on the Pulitzer committee once again to revoke the awards given to the New York Times for their coverage of the meddling in 2016.

The poll conducted by Trump’s pollster Tony Fabrizio, and obtained by Politico, sees the margins of Trump’s lead range from three points in Georgia to 12 in Michigan.

Fabrizio told Politico: ‘Poll after poll clearly demonstrates that Trump is still the 800lb gorilla in the [Republican party] and would be its 2024 nominee should he run.

‘This new data clearly shows that today the voters in these five key states would be happy to return Trump to the White House and send Biden packing.’

Nationwide, Biden is currently polling at 42 per cent thinking favorably of his leadership, and 52 per cent unfavorably, according to Real Clear Politics’ poll of polls.

Trump is around the same, with 41 per cent favorable and 52 per cent unfavorable.

And, while he mulls attempting to retake the White House, he is keeping himself in the public conscience through his emailed statements – weighing in almost daily on issues ranging from Kyle Rittenhouse’s acquittal to oil reserves.

He is also publishing a hardcover collection of hundreds of photographs from his administration, featuring his own captions, some handwritten.

The book – Our Journey Together – is scheduled for December 7, but not through a traditional New York publisher.

It will instead be released by a new company formed by son Donald Trump Jr. and campaign aide Sergio Gor, Winning Team Publishing.

While Barack Obama, George W. Bush and other recent predecessors of Trump wrote memoirs and announced multi-million dollar deals with Penguin Random House and other publishing houses soon after leaving office, New York publishers have resisted working with Trump – especially after the Jan. 6 siege of the U.S. Capitol by some of his supporters.

Simon & Schuster dropped a book by one Trump backer, Sen. Josh Hawley of Missouri, and faced widespread anger within the company for reaching a deal for a memoir by Trump’s vice president, Mike Pence.

Trump has referred at times to publishing a memoir, ‘the book of all books,’ but has otherwise granted interviews to Michael Wolff, Jonathan Karl of ABC News and others writing about him.

Should he release a memoir through Winning Team, it would be a test for how a new publisher could manage sales and distribution for a book which could well sell millions of copies.

The web site for Winning Team Publishing offers few details – no masthead or listings for books besides Trump’s. (‘Official Merch’ is ‘coming soon’).

Gor declined to discuss Winning Team’s plans, but says that additional authors have been signed.

Winning Team Publishing continues a wave of conservative imprints, among them the Daily Wire’s DW Books and All Seasons Press, formed this year by those who allege they are being ‘silenced’ by mainstream publishers.

Trump’s statement included a link to the company site, where the book can be preordered for $74.99 in standard format (new photo books have been known to sell for anywhere from $40 to more than $150) and $229.99 for a signed copy.

‘Our Journey Together’ is also listed on Amazon.com, whose founder Jeff Bezos Trump has often attacked, though as of midday Friday it was not available for purchase.

According to Amazon, the book is 320 pages, with a suggested reading audience of 12 years and up.