Driver is forced to charge his £50,000 electric BMW through first-floor apartment window after letting agent insists he remove his self-installed charging point

A driver who installed an electric charging point on his rented home without the landlord’s permission says they are being ‘heavy-handed’ after being told to remove it.

Joe Keating installed the device on the wall next to his parking space at his rented home in Rochdale, Greater Manchester, in an effort to reduce his carbon emissions and save on fuel costs.

But soon after, he was sent a letter from letting agency Stevenson Whyte asking him to remove the power point – a move which he claims shows a reluctance to support the ‘green agenda’.

The agency say they have a responsibility to everyone living at the development and not just one tenant and renters cannot all just install their own equipment whenever they wanted.

Mr Keating admitted he did not ask Stevenson Whyte for permission before installing the charging point for his vehicle, which is worth almost £50,000.

However, he said he ‘welcomed’ a constructive conversation about the issue. He also said he had been denied any opportunity to appeal the decision. 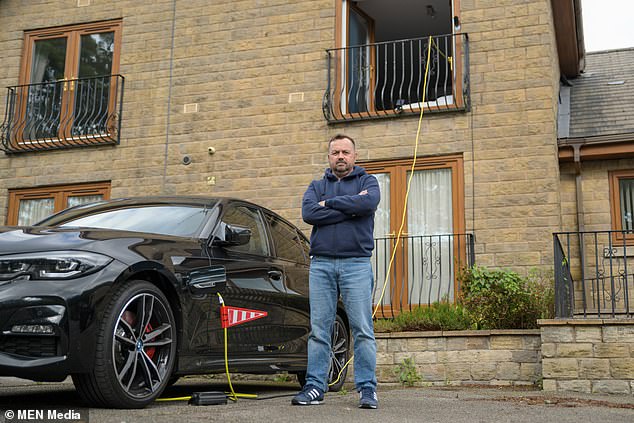 Joe Keating installed the device on the wall next to his parking space at his rented home in Rochdale, Greater Manchester 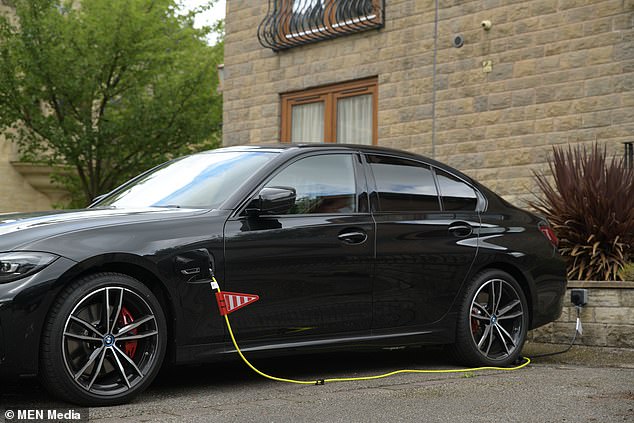 Now he has been forced to charge his £50,000 electric car through a first-floor apartment window after being told to remove his self-installed charging point (pictured)

Mr Keating said: ‘I can’t be the only person that lives in that type of accommodation and will be now starting to think about trying to move towards a low carbon economy, and we’re all going to have to have these kinds of vehicles eventually.

‘There’s no immediate plans from the developing agent to put any charge points in, so what am I supposed to do?’

He also pointed out that the UK suffered its hottest day on record in the last month, saying that people will ‘have to get on board a bit more’ with electric vehicles given the climate emergency.

Mr Keating said: ‘It just feels a bit heavy-handed in the backdrop of the highest temperatures the UK has ever had. We’ve got impending charges around Greater Manchester with all the Clean Air Zone plans. As a society, we need to change these barriers that are in the way needlessly.’ 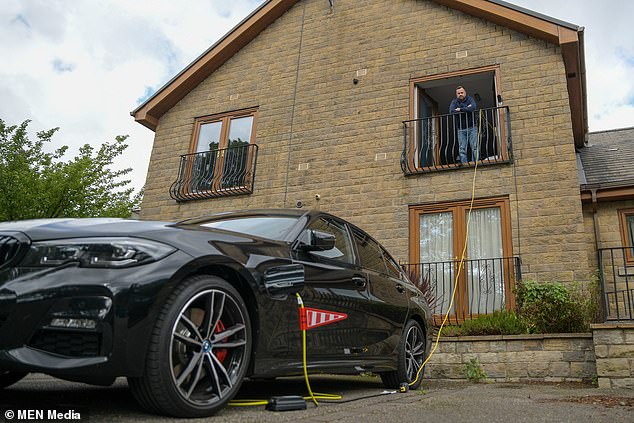 Mr Keating said: ‘It just feels a bit heavy-handed in the backdrop of the highest temperatures the UK has ever had.’ 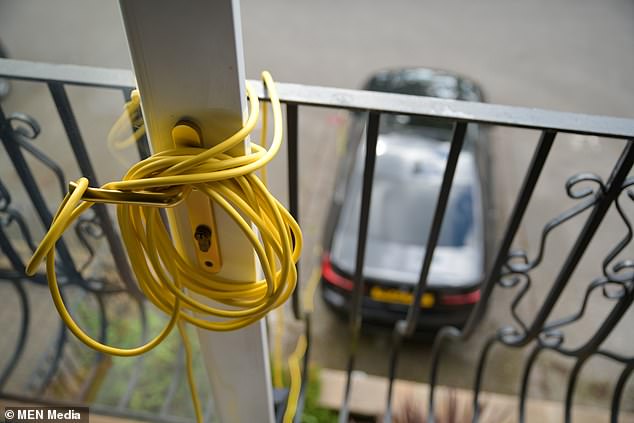 His ordeal comes among worries that inner city residents will be excluded from the electric car revolution due to a lack of charging stations.

The government is also funding an EV home-charge scheme, where it pays 75 per cent of the cost of installing an off-street charging station.

But for those renting or living in communal buildings, they are subject to landlord permissions and limitations, and installing a power point can be challenging.

A spokesperson for Stevenson Whyte, which manages the building in Falinge, said: ‘We have a duty of care to ensure the safety of all individuals at the development and a responsibility to ensure the lease terms are complied with.

‘If all leaseholders were to install their own equipment on the development without permission or control there would be significant issues with long-term management, aesthetics and safety.

‘The installation of electrical charging points in apartment blocks is an issue that all leaseholders/freeholders across the country will continue to face in the coming years and hopefully with time, more safe and compliant methods will be achievable for all leaseholders.’

Girl, 17, is killed after Mustang convertible being driven by ‘distracted’ boy, 17, flips