The sex ring mainly centres around two young girls and a boy between 2010 and 2020 in Glasgow, a court heard.

One of the girls was said to have been shut in a microwave during an attempt to kill her, while also allegedly being trapped in an oven and a fridge freezer too, prosecutors allege.

It is also claimed the children were forced to take part in satanic ‘seances’ and made to kill animals as part of the ring that is thought to have spanned across a decade.

The seven men and four women faced a 14-page indictment listing 43 different charges during a hearing at the High Court in the Townhead, Maryhill and Craigend areas of Glasgow.

The accusations claim that the three young children were raped at different times while some of the group did ‘clap, cheer and verbally encourage’ and film a ten-year-old girl being sexually assaulted.

It is then said ten of the group – apart from Forbes – assaulted the elder girl to the danger of her life from the age of six where she was made to eat cat food and take drugs and alcohol.

They are also believed to have crashed a wheelchair into her legs and put a black plastic bag over her head affecting her breathing. 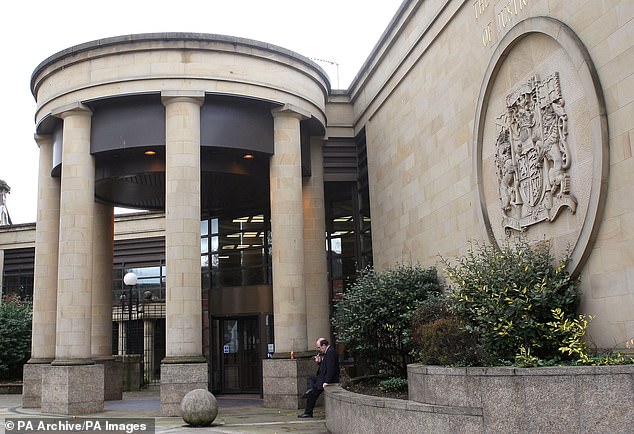 Prosecutors state all 11 are said to have got the boy and the older girl to take part in ‘seances (and) use a Ouija board…to call on spirits and demons’.

They also allegedly got the children involved in ‘witchcraft’ leading them to believe that they themselves had ‘metamorphosed into animals’.

The 11 are also believed to have worn cloaks and devil horns as well as making the young boy stab a budgie to death.

They are accused of killing a number of dogs themselves while also getting the children to attack the animals.

Owens and Lannery first face a charge of neglecting the three youngsters along with another child while apparently caring for them.

The accusation claims they got the young boy to ‘courier controlled drugs’ on their behalf.

Owens, Lannery, Williams, Brannan and Gallagher allegedly assaulted the young boy, including when he was put in a bath which he claims he was told was filled with blood.

Owens, Lannery, Williams, Brannan and Clark are also accused of the attempted murder of the younger of the two girls starting when she was just weeks old, between December 2015 and June 2019.

The young girl, who was allegedly hung by her jumper from a nail on the wall, is also thought to have been made to ‘act like a dog’ and eat pet food – and was chased while wearing a devil mask.

One of the young girls was also allegedly threatened to go to Turkey with a male stranger by Owens and Lannery.

Owens alone faces more charges that he raped the older girl including with Watson, Brannan, Clark, and Forbes – who alone faces an indecent images accusation.

Owens and Lannery were further accused of a sex abuse involving the boy and the younger girl.

A separate allegation states all of the group were allegedly involved in the rape on various occasions of the older girl. The charge states that while the girl was being sexually assaulted, Lannery, Williams, Laing and Gallagher did ‘clap, cheer and verbally encourage’ the alleged crime.

Prosecutors further state Gachagan, Laing, Carr, Forbes and Watson allegedly paid for ‘sexual services’ for three of the children, with Owens and Lannery claimed to ‘facilitate’ this.

There are then a string of accusations detailing further alleged crimes against all three children, with Owens and Lannery alleged to have taken part in raping the boy.

All 11 also allegedly abused the boy with the men this time were said to have ‘cheered’ while it was going on. Owens and Lannery are also claimed to have had sex in front of children.

Owens and Brannan go on to face an accusation of raping the boy, who along with Lannery and Williams are said to have made him watch a video of one of the girls being attacked.

Lannery is charged with molesting the younger girl before it is claimed she, Owens, Williams and Brannan raped her, with the girl allegedly held down in a cot at one point by all 11.

As this was said to be happening, the women are accused of clapping and cheering while the boy and older girl – who was made to ‘operate a camera and create video footage’- were shut in a room.

Owens and Lannery then face charges of attempting to defeat the ends of justice and attempting to pervert the course of justice, with the older girl threatened and her call to the police disconnected, while they also disposed of items to avoid prosecution.

There are thought to be other members involved, namely Maureen Goudie, Steven McHendrie, Robert Brown, James McLean and Douglas Gachagan but the indictment states they are now ‘deceased’.

Judge Lord Beckett set an eight week trial at the High Court in Glasgow for September next year. A further hearing was also fixed for October.

Not your usual MUGSHOTS: How hardened criminals can smile and pose up in photobooths in prisons