Elon Musk says Donald Trump should skip the 2024 election even as he vows to restore the former president’s Twitter account.

The Tesla CEO shared his views on US politics in a series of tweets Thursday evening.

He said Trump shouldn’t run for office because a ‘less divisive candidate would be better in 2024,’ before going on to criticize Joe Biden for thinking ‘he was elected to transform the country, but actually everyone just wanted less drama.’

On Tuesday, the South African mogul revealed he would reverse Trump’s ban from the platform.

Trump was banned last January after public outcry surrounding the storming of the Capitol and his insistence that the 2020 election was ‘stolen’ from him.

Musk, 50, is in the process of completing his $44 billion acquisition of Twitter, once the ex-president’s social media network of choice.

Elon Musk believes Trump shouldn’t run for a second term in 2024, even as he promises to restore the former president’s Twitter account

Speaking virtually at a Financial Times conference in London on Tuesday, the SpaceX founder said that Twitter’s move to ban the former US president ‘was a morally bad decision and foolish in the extreme.’

‘It alienated a large part of the country, and did not ultimately result in Donald Trump not having a voice. He is now going to be on Truth Social,’ said Musk. ‘So I think this may end up being frankly worse than having a single forum where everyone can debate. I guess the answer is that I would reverse the permanent ban.’

But that doesn’t mean Musk wants to see the former Celebrity Apprentice host return to the Oval Office.

‘Even though I think a less divisive candidate would be better in 2024, I still think Trump should be restored to Twitter,’ Musk tweeted on Thursday.

Trump was permanently banned from Twitter on January 8, days after his supporters stormed the Capitol and forced senators into secure rooms as they certified the election results in favor of Biden.

In a statement at the time, the company cited one tweet in which Trump promised that his supporters would have a ‘GIANT VOICE long into the future.’ In another tweet, he clarified that he would not attend Biden’s inauguration.

Musk has since made it clear that he would return Trump to Twitter when his purchase is finalized.

Musk said Dorsey, who was CEO until November 2021, agreed with him.

‘I do agree,’ Dorsey tweeted, pointing out that he supported bans for sharing content such as child sexual exploitation (CSE), but not generally.

‘There are exceptions (CSE, illegal behaviour, spam or network manipulation, etc), but generally permanent bans are a failure of ours and don’t work, which I wrote about here after the event (and called for a resilient social media protocol).’

Musk says Biden was not elected to be a transformational president but chosen because people wanted ‘less drama.’ Above, Biden (center) with Sultan Haji Hassanal Bolkiah of Brunei (left) and President of Indonesia Joko Widodo (right) on March 12

The latest consumer price data show that year-on-year inflation is running at 8.5 percent

The Biden administration announced it was ditching plans for a massive sale of energy drilling rights just as gas prices hit a high for the third day running – this time reaching $4.42 on Thursday according to motoring organization AAA

The former president has declined the offer in favor of his own fledgling network Truth Social, which has struggled to gain users.

In a poll conducted by CNN and released in February, half of Republican and Republican-leaning independents said they would re-nominate Trump in 2024.

Among those who preferred a different candidate, 21 percent went with Florida Gov. Ron DeSantis, whose highly publicized row with Disney over the so-called ‘Don’t Say Gay’ law has mobilized conservatives in his favor.

On Thursday, Musk also tweeted: ‘Biden’s mistake is that he thinks he was elected to transform the country, but actually everyone just wanted less drama.’

Biden’s poll numbers have struggled as inflation, caused in part by the pandemic’s effect on the supply chain, continues to raise prices.

A recent Morning Consult poll shows that he has a net favorability in only 10 US states.

But even there, his net approval has dramatically shrunk since this time last year.

Musk’s tweet was likely in reference to Biden’s progressive agenda as he tries to push for liberal priorities like a multi-million dollar harm reduction program for drug users.

His administration adamantly denied that the program would help dole out crack pipes to addicts, but smoking kits distributed all over the East Coast include such paraphernalia. 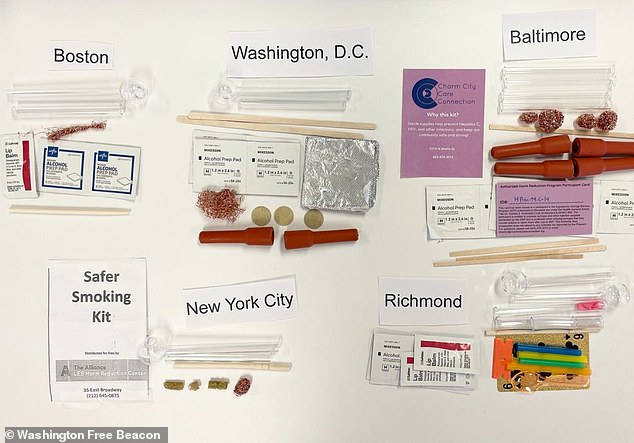 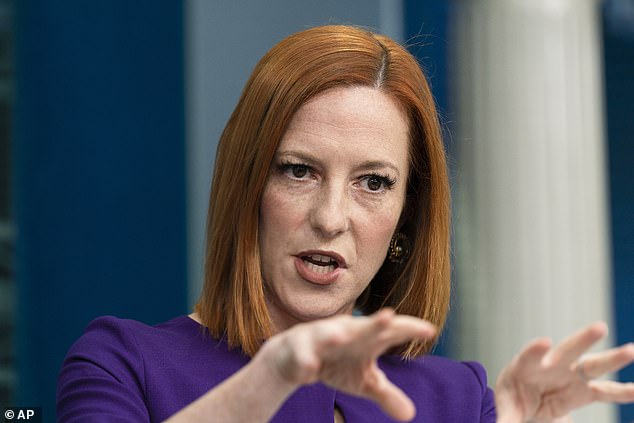 ‘They were never a part of the kit,’ said press secretary Jen Psaki of crack pipes. ‘It was inaccurate reporting’

All of the centers were non-profit health organizations and governmental agencies, exactly the types of groups eligible to apply for funding under the Biden administration’s $30 million grant program.

Asked if there were steps in place to prevent organizations from using these dollars for crack pipes on Thursday, White House press secretary Jen Psaki said: ‘This is a conspiracy theory being spread out there.’

Contents of safe smoking kits vary from one organization to another, and not all may contain crack pipes.

All of the five organizations the Free Beacon visited included not only crack pipes in their kits but also utensils to use heroin, cocaine and crystal methamphetamine, without requiring any sort of rehabilitation along with the free drug kits.

None of these five specific groups responded to requests for comment about whether they applied for the federal grant. The Biden administration is set to announce grant recipients on May 15.

Meanwhile at Twitter, staff shake-ups continue as Musk is set to take over the platform.

On Thursday, head of consumer product Kayvon Beykpour (left) announced he would be leaving the company. Beykpour will be followed out the door by Bruce Falck (right), Twitter’s general manager for revenue

Beykpour, who founded Periscope, admitted on his account he had not wanted to go but was brutally ousted by CEO Parag Agrawal while he was on paternity leave so they could ‘take the team in a new direction’.

A leaked memo from the under fire Twitter chief to staff noted how the tech giant needed the ‘right leaders at the right time’.

He announced interim GM of consumer product Jay Sullivan will take over both their jobs in a new merged role.

It comes as the social media firm launches a tsunami of cuts by stamping down on contractor spending, travel and events, marketing and real estate.