Canadian environmentalist David Suzuki is facing widespread criticism after he said that ‘there are gonna be pipelines blown up’ if leaders don’t address climate change during a protest on Saturday.

The event, dubbed a ‘Funeral for the Future,’ was held in downtown Victoria, British Columbia just days after the COP26 conference in Scotland, which protesters say failed to meaningfully address rising temperatures and other climate issues.

It happened as British Columbia battles extreme weather events like rainstorms and mudslides that continue to drive up property losses, with the Insurance Bureau of Canada calling it ‘a real wake-up call that climate change isn’t some future threat.’

‘We’re in deep, deep doo-doo,’ Suzuki, 85, told a CHEK reporter. ‘And they’ve been telling us, the leading experts for over 40 years.

‘This is what we’re come to. The next stage after this, there are gonna be pipelines blown up if our leaders don’t pay attention to what’s going on.’ 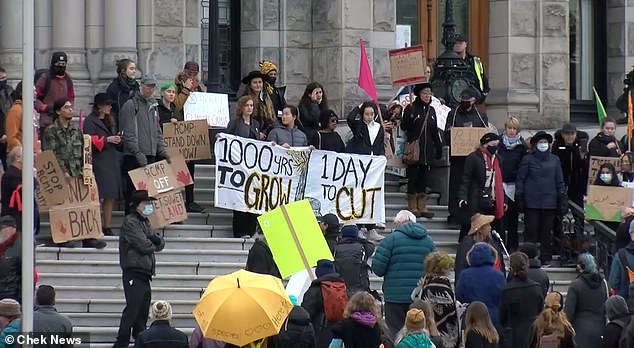 Suzuki made the comments during a ‘Funeral for the Future’ protest in Victoria, British Columbia on Saturday, days after the COP26 conference wrapped up in Scotland 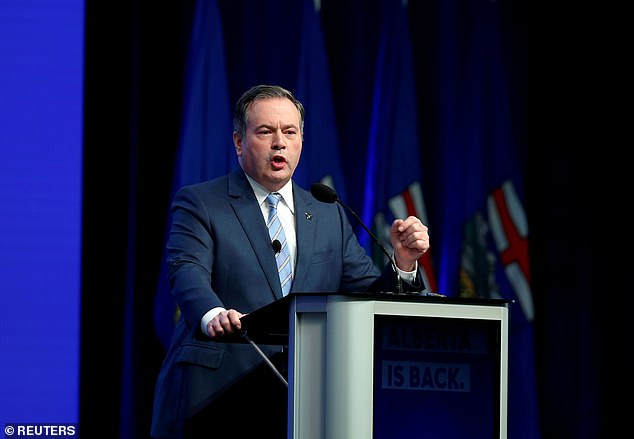 Alberta Premier Jason Kenney criticized Suzuki on Monday: ‘In Canada we resolve our differences peacefully and democratically, not with threats of terrorism or acts of violence’

Suzuki, who was a professor at the genetics department of the University of British Columbia for nearly 40 years, later clarified that he was not condemning violence.

‘Of course not,’ Suzuki said, according to Canadian newspaper National Post.

Who is David Suzuki? 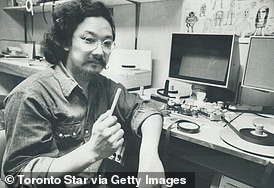 David Suzuki, 85, is a retired professor and environmentalist who has been speaking out about climate change since at least the 1970s.

He was born in Vancouver and went to college at Amherst in Boston, eventually earning a PhD in zoology from the University of Chicago.

He hosted a children’s TV show, Suzuki on Science, on the Canadian Broadcasting Company in the early 1970s.

He has hosted various television series and specials throughout his career, including the CBC series The Nature of Things, which last aired in 2017.

He taught genetics at the University of British Columbia for nearly 40 years until his retirement in 2001.

He’s been a forceful and outspoken advocate for climate change mitigation for decades.

In 2015, he mocked a Canadian politician who said the economy must be considered when tackling climate change legislation.

‘It sounds very much to me like southern states argued in the 19th century, that to eliminate slavery would destroy their economy,’ Suzuki said.

‘The violence is coming from the authorities, from government, from the [Royal Canadian Mounted Police],’ he said. ‘They’re declaring war against those that are protesting.’

‘I think it’s going to be threatened by groups that feel government isn’t going anything,’ Suzuki said.

On Monday, two journalists who were arrested while covering Indigenous protests against British Columbia pipelines on Friday were freed on bail.

They were arrested along with with 13 protesters who were demonstrating against a pipeline being built in the remote region of British Columbia to a ship terminal that is being developed by major companies including Shell, Petronas and PetroChina, according to the New York Times.

The pipeline is more than halfway finished, the Associated Press reports.

Suzuki has been a climate activist for decades, urging leaders and the public to take action to mitigate its effects on sea level rise and the future of human civilization.

‘Multiple studies published in peer-reviewed scientific journals show that 97 percent or more of actively publishing climate scientists agree : Climate-warming trends over the past century are extremely likely due to human activities,’ according to NASA.

‘This type of rhetoric is dangerous and undemocratic,’ tweeted Erin O’Toole, the head of the  Conservative Party of Canada.

‘It implies that energy workers and infrastructure should be targets for acts of terrorism. All political leaders should unreservedly condemn this statement. ‘

The premier of Alberta, the province next to British Columbia, also hit out at Suzuki. 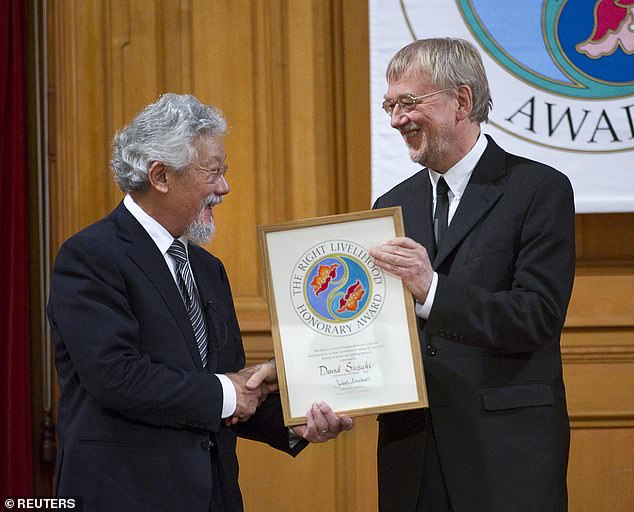 Suzuki, a noted academic and activist, has hosted numerous science shows in Canada. Above, he receives the Honorary Right Livelihood Award, or the ‘Alternative Nobel Prize,’ in 2009 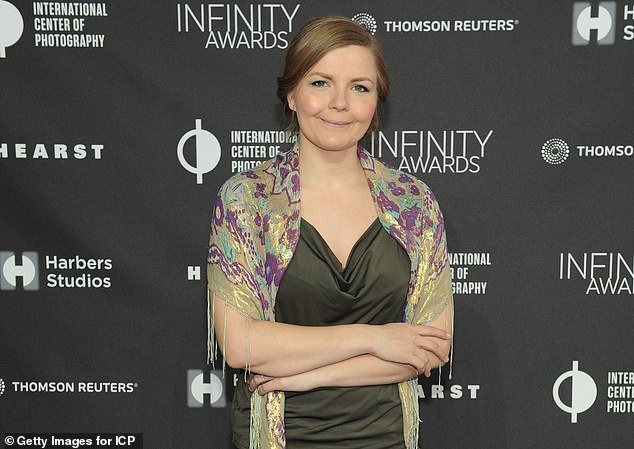 Suzuki said Canadian police are the ones responsible for violence. On Friday, photographer Amber Bracken was arrested along with 13 demonstrators near a pipeline in British Columbia

‘This incitement to violence by David Suzuki is dangerous, and should be condemned universally,’ Jason Kenney tweeted Monday.

‘In Canada we resolve our differences peacefully and democratically, not with threats of terrorism or acts of violence.’

Violence like the kind suggested by Suzuki is not uncommon.

In 2000, eco-warrior Weibo Ludwig was convicted of bombing a Suncor well in 1998 in Alberta.

‘If the oil companies run roughshod over your lives, you have to take defensive action against them, whatever is necessary,’ Ludwig said after two wells near his home were blown up in 1997, the National Post reports. 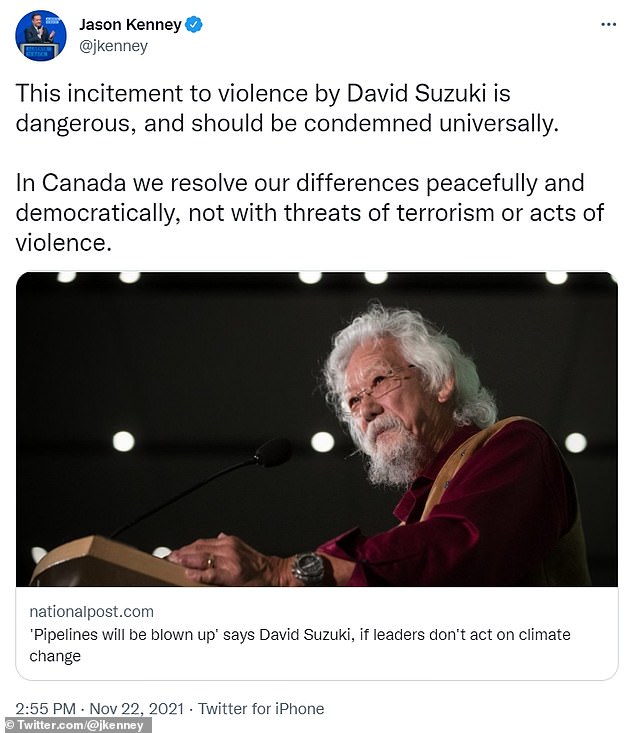 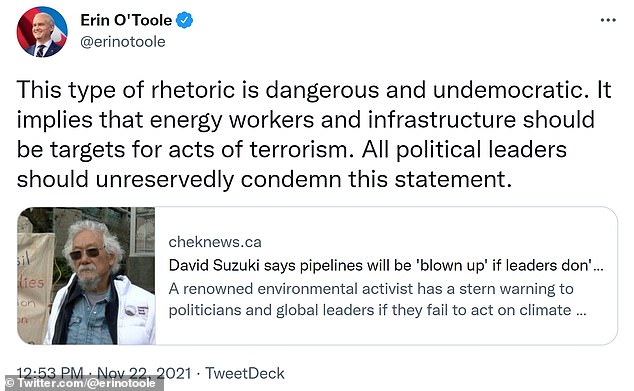 ‘You can’t just let them kill your children.’

Even Suzuki’s own foundation has distanced itself from his founder, tweeting that its founder ‘speaks on his own behalf – not for the David Suzuki Foundation.

‘David Suzuki has been predicting environmental consequences for decades. Similarly, this comment was a predictive reflection on the escalating stakes and potential for conflict due to the effects of human-caused climate change.’ 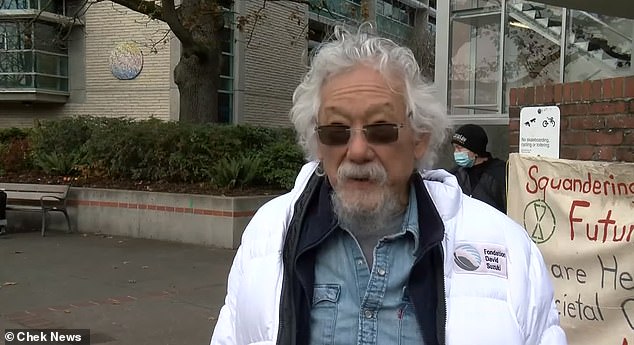 ‘I think it’s going to be threatened by groups that feel government isn’t going anything,’ Suzuki has since clarified regarding his comments that ‘pipelines will be blown up’

British Columbia has been experiencing extreme weather events, with some blaming the storms on climate change.

‘We opened the year with some severe storms, had the heat dome, really devastating wildfires, and now we’ve had this,’ said Aaron Sutherland, vice-president of the Insurance Bureau of Canada’s Pacific region, referring to the previous week’s rainstorms, flooding and mudslides.

‘It should be a real wake-up call that climate change isn’t some future threat. It is a clear and present danger that’s increasingly impacting all of us today.’

Passenger hangs out of moving car holding up flat-packed carton