NYC Mayor Eric Adams DEMOTES his brother from deputy NYPD commissioner post to deputy director of mayoral security with $210,000 salary – a $30,000 pay cut – after being faced with backlash over hiring him

New York City Mayor Eric Adams has demoted his younger brother from deputy NYPD commissioner – a post that comes with a $240,000 salary – to a slightly less lucrative position of director of his security detail after facing accusations of nepotism.

Bernard Adams, 56, a retired NYPD sergeant who had spent the past decade overseeing parking at a Virginia university, will now serve as executive director of mayoral security, overseeing the unit that protects his brother’s safety. He will earn $210,000 a year.

In an interview with Jake Tapper on CNN’s State of the Union on Sunday, the mayor vehemently defended his brother’s appointment. 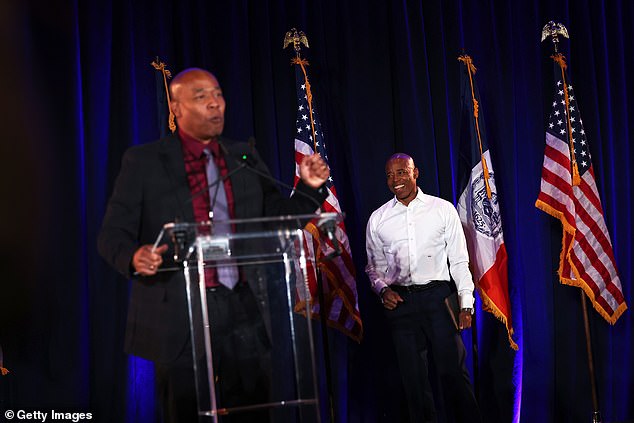 ‘My brother is qualified for the position,’ Adams declared. ‘Number one, he will be in charge of my security, which is extremely important to me at a time when we see an increase in white supremacy and hate crimes.’

Adams argued that his brother understands that as the mayor of New York City, he must strike the right balance between being protected from possible threats and being approachable to his constituents.

‘He understands law enforcement,’ Adams said. ‘He’s a 20-year retired veteran from the police department, and I need someone that I trust around me during these times for my security, and I trust my brother deeply.’

When asked about nepotism concerns, Adams told Tapper that the New York City’s Conflicts of Interest Board is currently reviewing his brother’s appointment.

Empty roads… but roads to the FINAL: Rush-hour traffic falls 20% the morning after England win