New York City mayor Eric Adams has boldly claimed that residents in the Big Apple need to ‘do better’ in preserving historically black neighborhoods in the city in his first Juneteenth speech.

The 61-year-old Democrat said that forcing out black residents from historically black neighborhoods in not only New York City, but also throughout other cities in the U.S. is similar to slavery.

‘When I was in Ghana last year, I saw how families were displaced, torn apart and brought over to America through slavery in the hulls of the ships, living in dungeons, spending months and months living in their human waste, having their babies taken from them, and saw them dispersed and displaced,’ he said in his address on Sunday from Central Park.

‘That’s no different here,’ the mayor added in front of a packed crowd celebrating the new federal holiday.

‘We cannot look in the rear view mirror and say we should have done better when we are here right now,’ Adams further said. ‘Let’s do better right now. Let’s acknowledge the presence of people to be part of the community that they built.’ 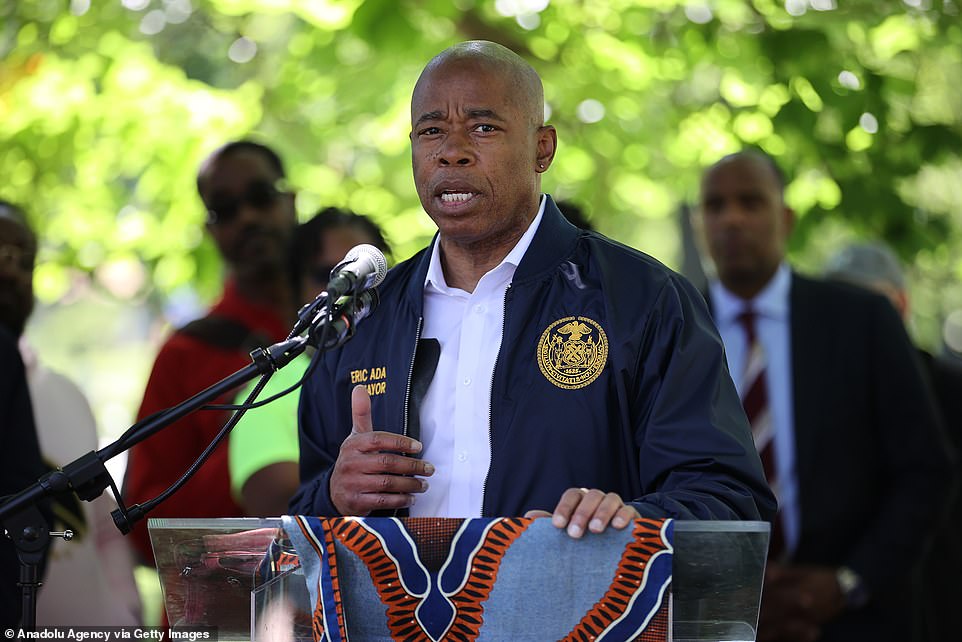 Mayor Eric Adams, 61, speaks during Juneteenth Celebration in Seneca Village at Central Park of New York City, where a black population of 200 people lived a little less than 100 years ago before being ousted by construction and city officials 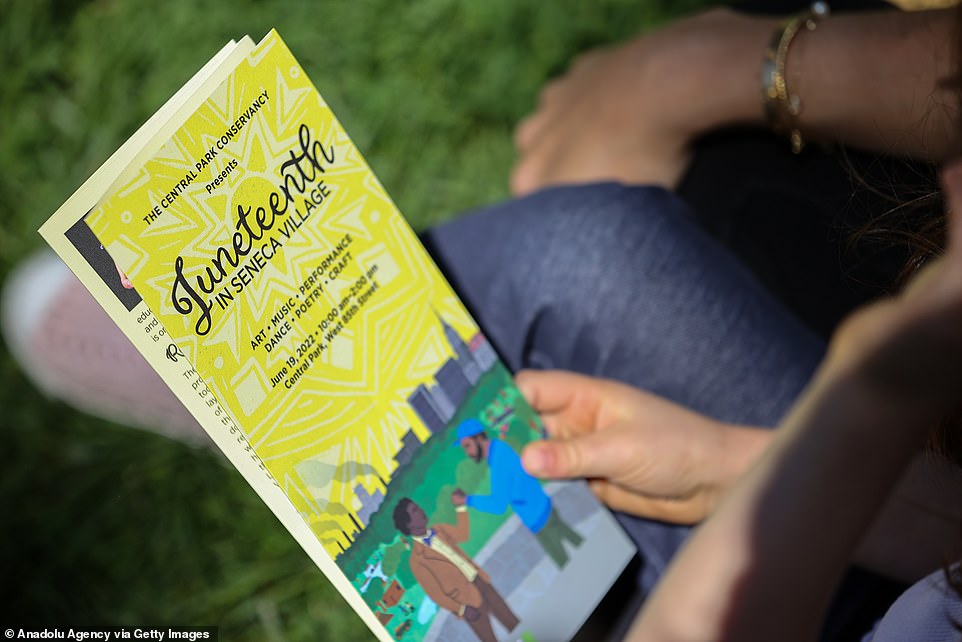 Not too far away from the mayor’s location is Seneca Village, founded in 1825 in Central Park and previously home to more than 200 free black residents at the time. They were later evicted from the area in the 1950s as construction in New York City was on the rise.

‘We should think about that as we jog through here as we watch this beautiful space that [Frederick] Olmsted built, as we look at how great this Central Park is in the center of Manhattan, we displaced some families here. We destroyed lives,’ the mayor went on to say. ‘There were families here long before Starbucks. They were here, and they provided a foundation.’

Many areas in the city that have a highly populated demographic of black residents are mostly in Harlem, Brooklyn, Queens. Adams said: ‘And now what’s happening now? We’re displacing them again,’ referring to skyrocketing rents in New York City since the end of the pandemic.

‘No one wanted this land. This land was not attractive. No one wanted Manhattan,’ Adams further said, claiming the Big Apple’s rise within the last century forced minorities to settle elsewhere. ‘These churches left here to have to go and build in other locations like Harlem, downtown Brooklyn.’ 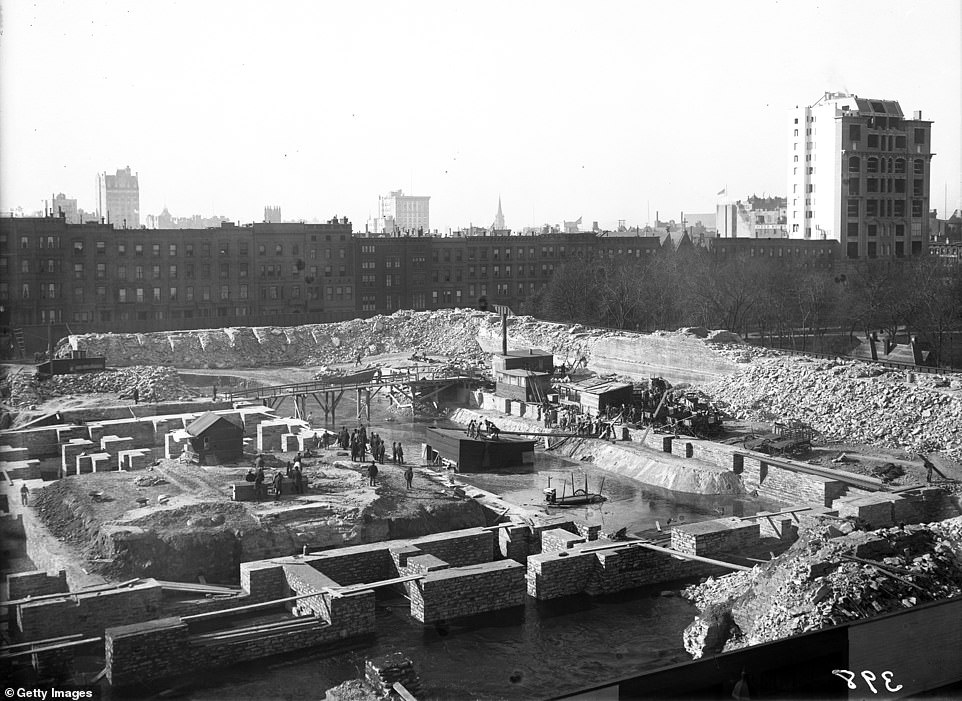 In the 19th century, New York City wrapped up construction of one of its most significant project through public service, the Croton Aqueduct system (pictured). The water system featured a large receiving reservoir built right across the community of Seneca Village in 1842 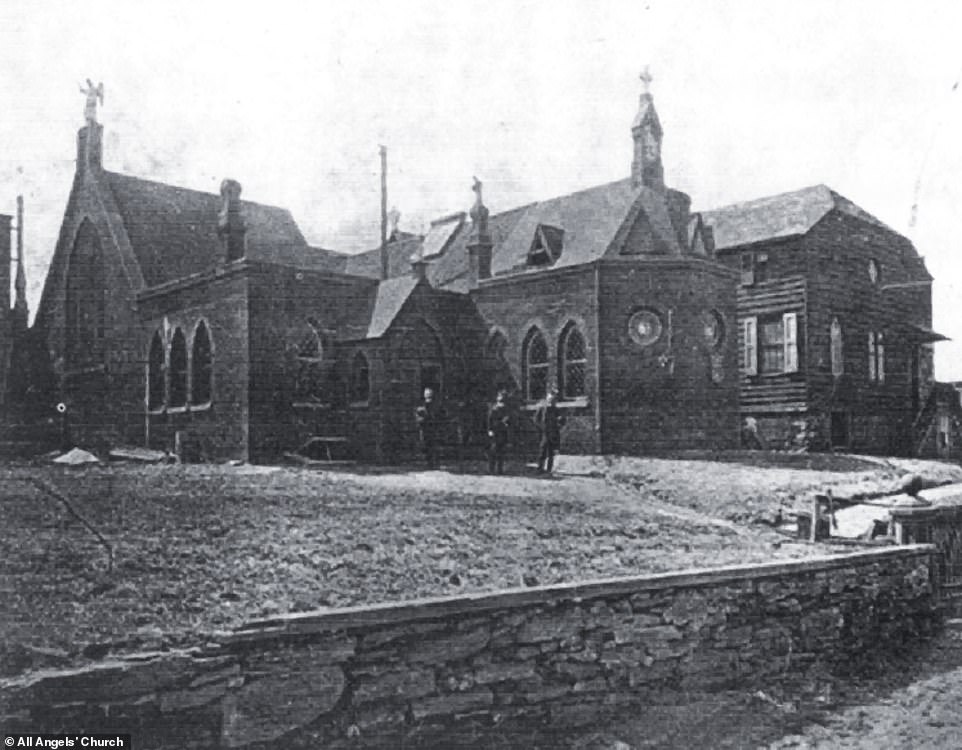 All Angels’ Church on West End Avenue, between 80th and 81st streets, considered as one of the most symbolic structures in Seneca Village before it was demolished and built elsewhere 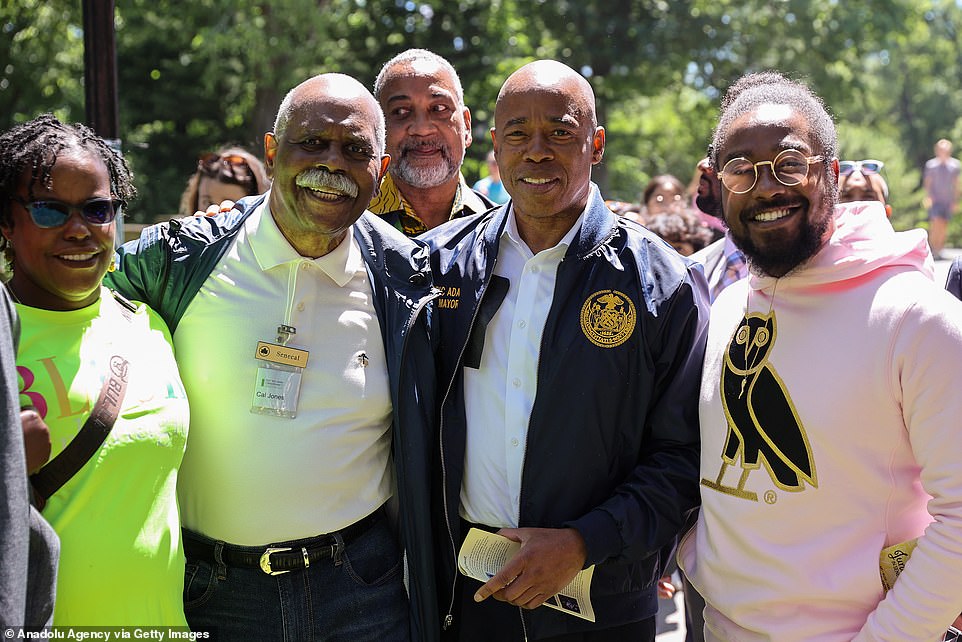 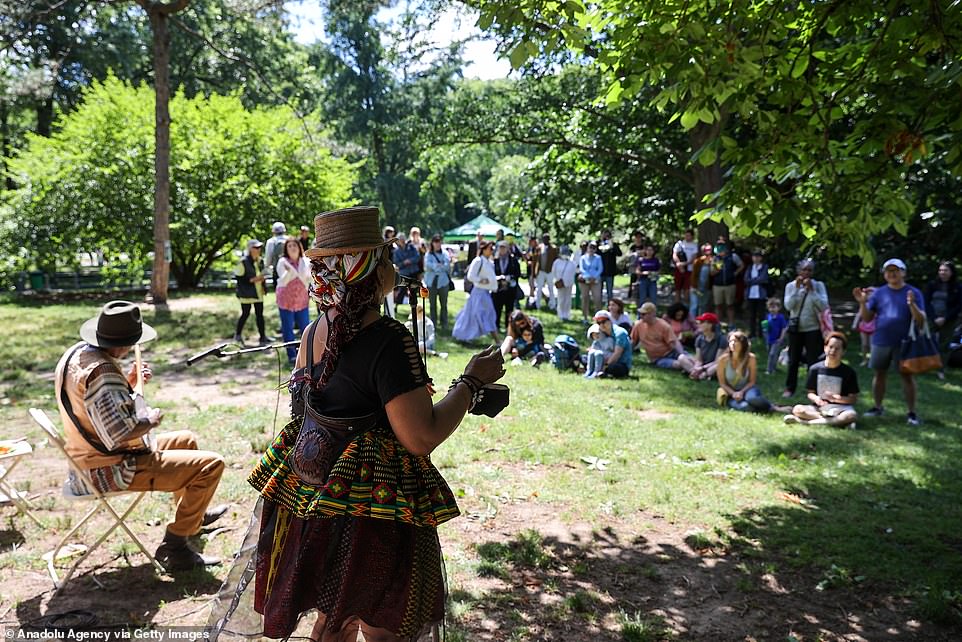 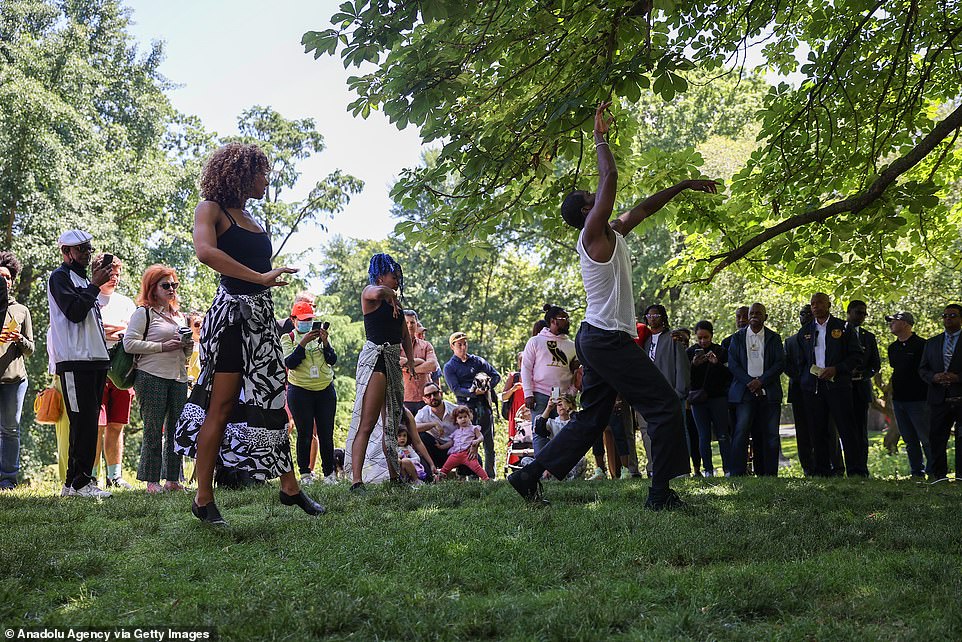 The mayor claimed black residents in New York City aren’t the only ones in the country feeling the realms of possibly being driven out from their neighborhoods. Cities such as Tulsa, Oklahoma; Chicago, Los Angeles, Austin and Atlanta have also undergone massive transformation of gentrification, where minority communities are being met with ‘destruction.’

‘Starting anew over and over again, and we wonder why we see some of the crises that we’re facing in black in brown communities,’ Adams said. ‘Every time they were able to have a foothold, they were displaced again. As soon as you started to build something, it was torn apart.’

In April, Adams declared Juneteenth as a federal holiday in New York City and now wants to forever remember those who built the city’s foundation.

‘Let’s educate our children so that they know that there were folks who were here that built this city that we call New York,’ he said, signing off. 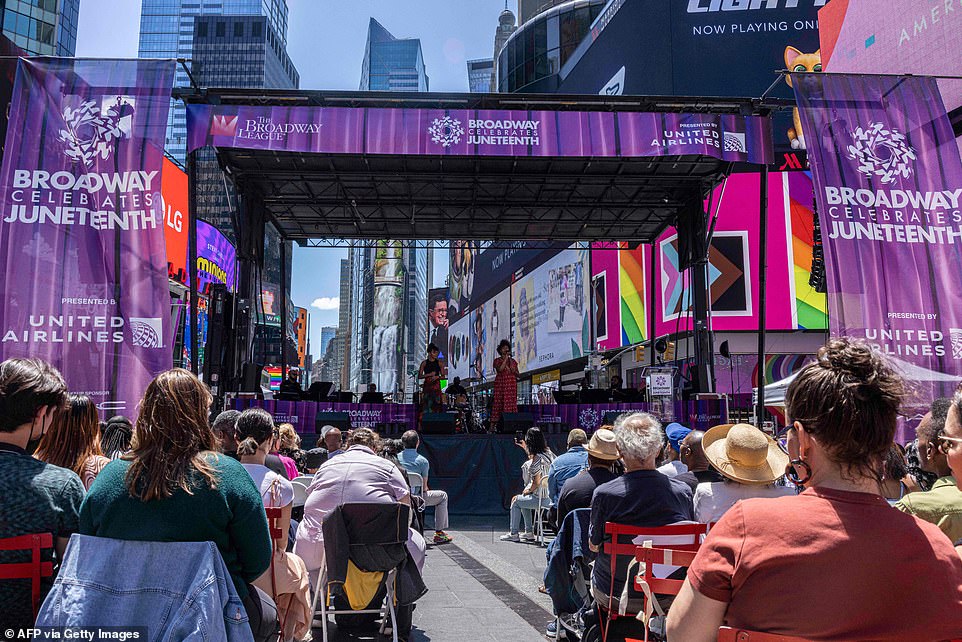 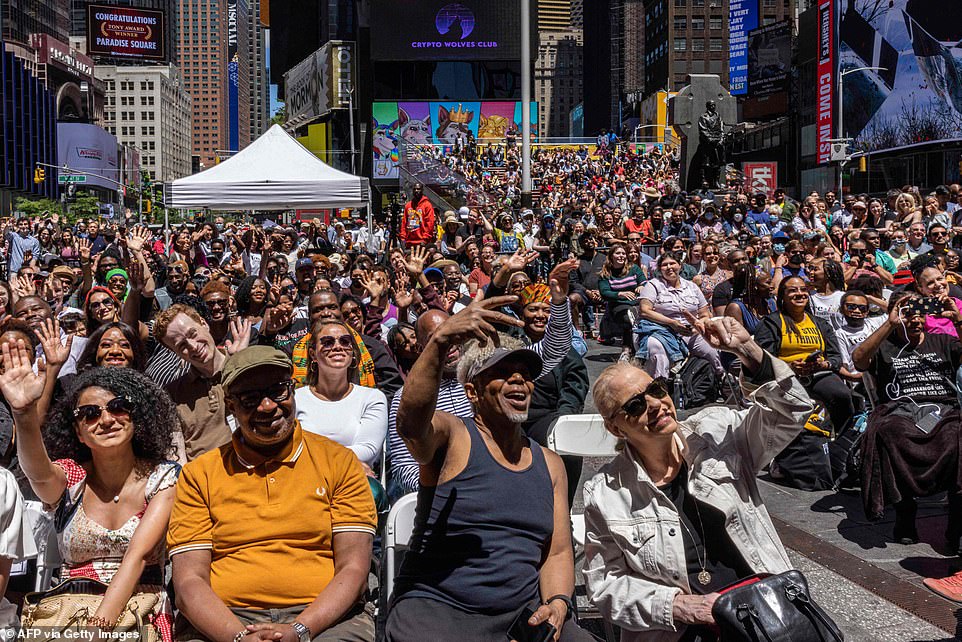 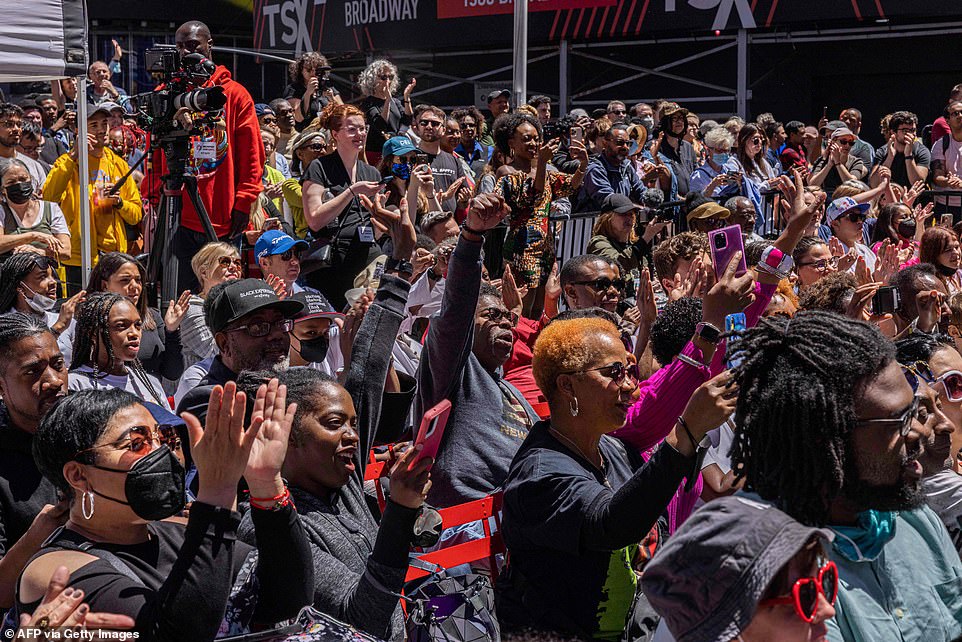 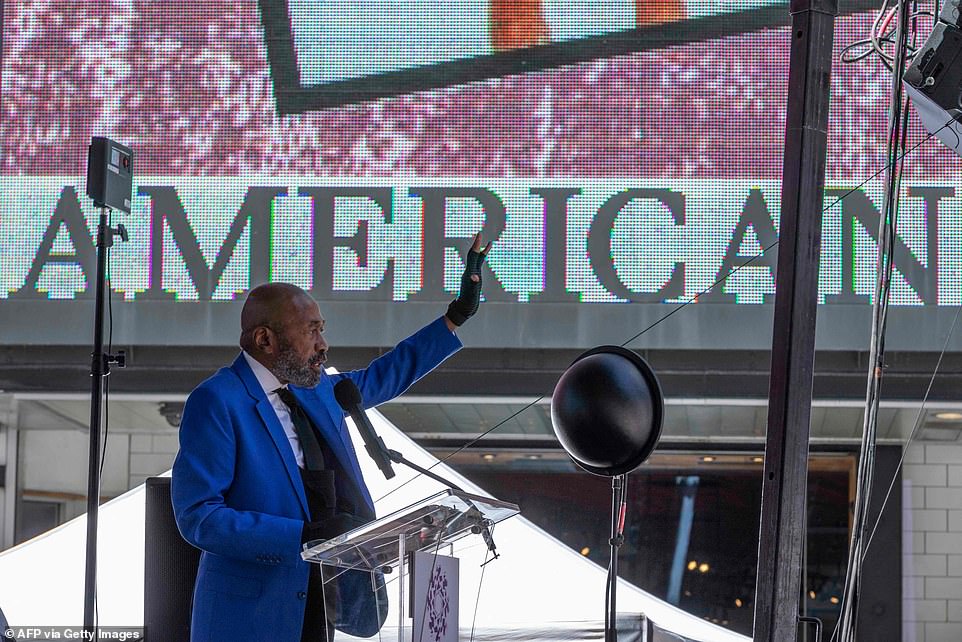 The event had cast members from Broadway shows including: The Book of Mormon Company, Dear Evan Hansen, Funny Girl, The Minutes, Moulin Rouge! The Musical, Mr. Saturday Night, Paradise Square, The Phantom of the Opera; and Tina – The Tina Turner Musical.

New York City Hall will also feature the Pan-African flag’s colors (red, black and green) in the evening on Sunday in honor of the new holiday.

Celebrations also included an emphasis on learning about history and addressing racial disparities. Many people celebrated the day just as they did before any formal recognition.

Juneteenth, also known as Freedom Day, commemorates the day in 1865 when Union soldiers arrived in Galveston, Texas, to order freedom for the enslaved people of the state — two months after the Confederacy had surrendered in the Civil War.

‘Great nations don’t ignore their most painful moments,’ Biden said in a statement Sunday. ‘They confront them to grow stronger. And that is what this great nation must continue to do.’ 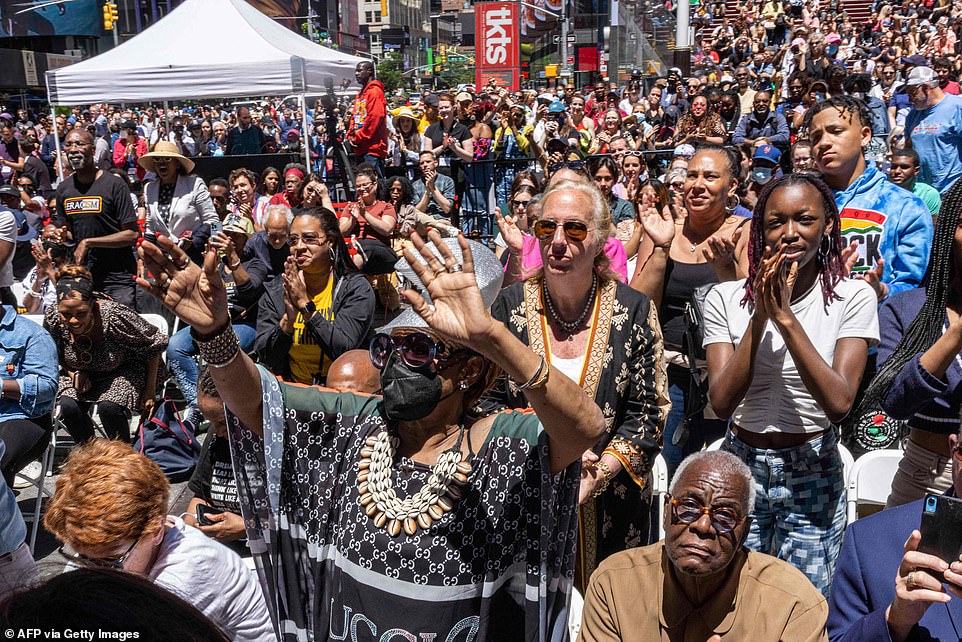 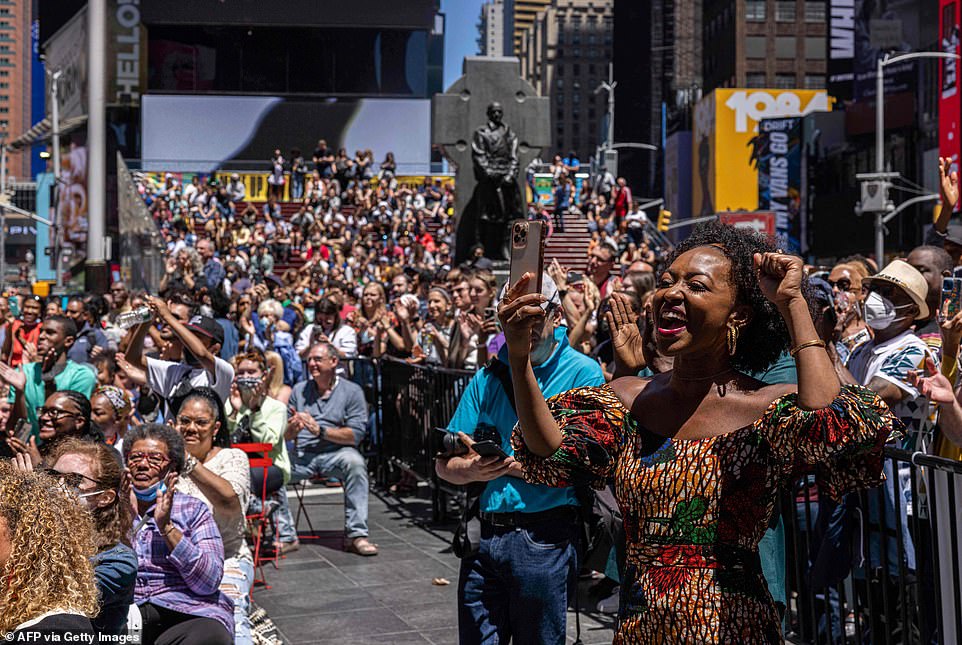 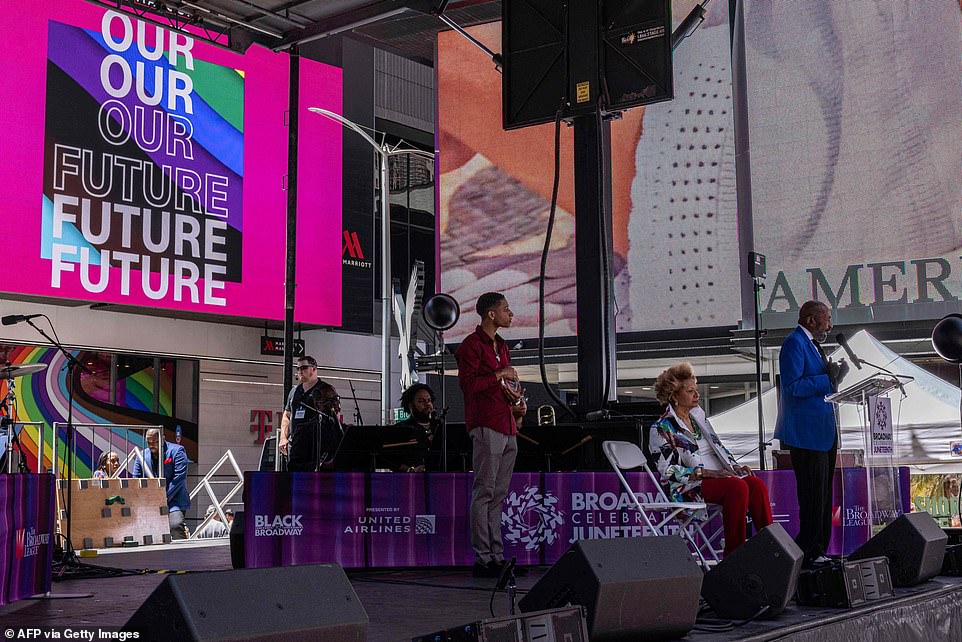 A Gallup Poll found that Americans are more familiar with Juneteenth than they were last year, with 59% saying they knew ‘a lot’ or ‘some’ about the holiday compared with 37% a year ago in May. The poll also found that support for making Juneteenth part of school history lessons increased from 49% to 63%.

Yet many states have been slow to designate it as an official holiday. Lawmakers in Mississippi, South Carolina, Tennessee and elsewhere failed to advance proposals this year that would have closed state offices and given most of their public employees paid time off.

Celebrations in Texas included one at a Houston park created 150 years ago by a group of formerly enslaved men who bought the land. At times, it was the only public park available in the area to Blacks, according to the conservancy’s website.

‘They wanted a place that they could not only have their celebration, but they could do things other things during the year as a community,’ said Jacqueline Bostic, vice chairwoman of the board for the Emancipation Park Conservancy and the great-granddaughter of one of the park’s founders, the Rev. Jack Yates.

Participants included Robert Stanton, the first African American to serve as director of the National Park Service, and Philonise Floyd, the brother of George Floyd, who grew up in the historically Black neighborhood where the park is located and whose killing by a Minneapolis police officer two years ago sparked protests worldwide.