A dad has unveiled his incredible transformation after being prompted to change his unhealthy lifestyle when his young son asked: ‘When are you going to die?’

Matthew Riggs, 35, from Essex, used to drink a bottle of rum everyday, buy takeaways three times a day and ‘never exercise,’ but he radically overhauled his lifestyle to lose more than half his body weight, going from 27stone 2lbs in 2019 to 13st 2lbs today.

Now he works out daily, has not drunk alcohol in 449 days and has eaten the same lunch of turkey meatballs for three years. 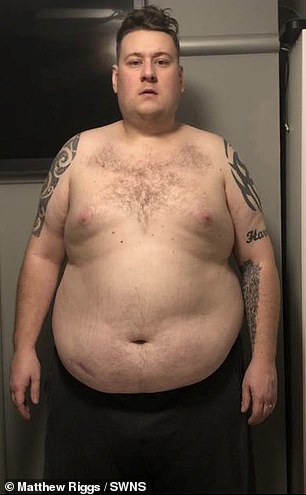 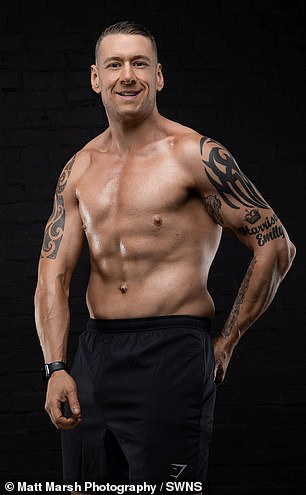 Matthew Riggs, 35, from Essex transformed his lifestyle, diet and mindset to lose more than half hi bodyweight to go from 27stone 2lbs in 2019, left, to 13 stone 2lbs today, right

The changing moment occurred after a ‘heart-breaking’ conversation he had with his older son Harrison, who asked when his father was going to die because of his weight.

Matthew recalled: ‘Back in March 2019 my son, who was only seven at the time, came home from school one day and said he’d been learning about the body.

‘He just came straight up to me and asked “Daddy, when are you going to die?”.

‘Completely shocked, I asked him “Harrison, why is Daddy is going to die?”. 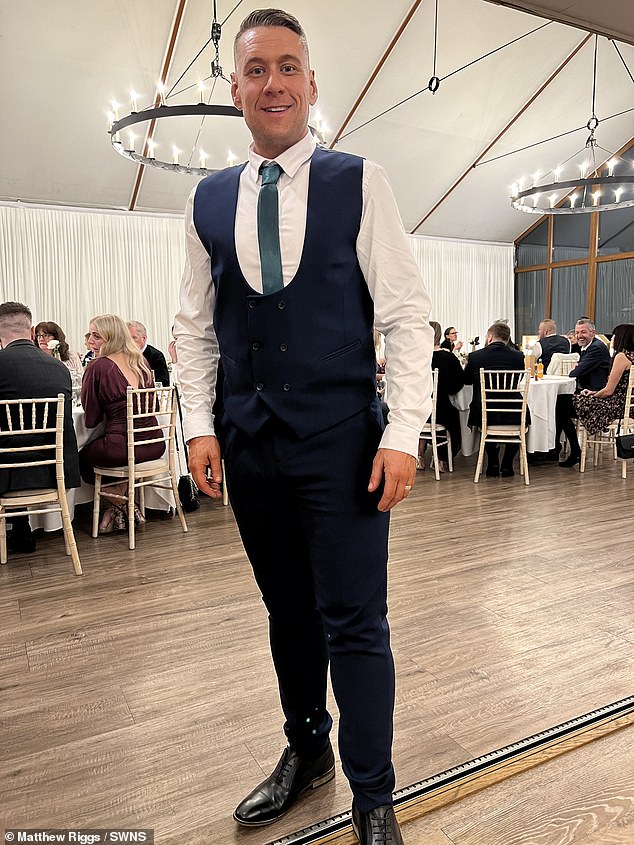 Looking dapper! The father-of-two admitted he lived an ‘unsustainable lifestyle’ and has found a new lease of life since shedding the weight, pictured

‘He responded saying, “We’ve been learning about the body at school, and your heart is going to blow up because you’re fat”.

‘It shattered me. Completely broke me to pieces.

‘I felt myself welling up so I went into my room, looked at myself in the mirror and just broke down.

‘That was the light bulb moment for me.

‘I went back to my son, and I promised to join a gym and change my life for good to show him that anything is possible.’ 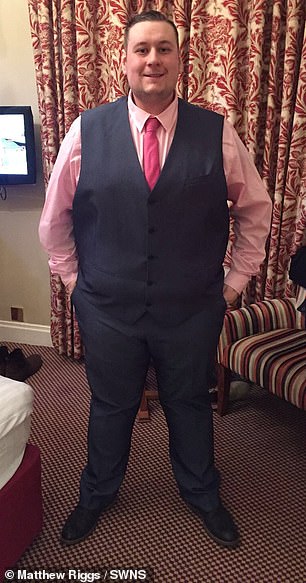 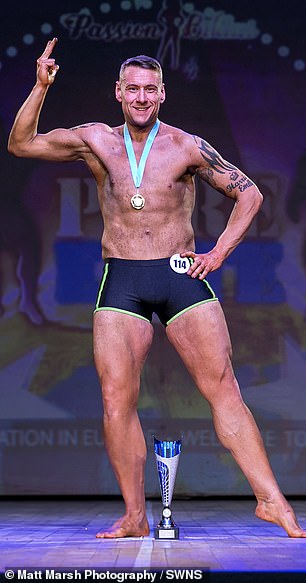 Matthew showed off his staggering six-pack as he won the title of Pure Elite Transformation champion succeeding his three year fitness journey. 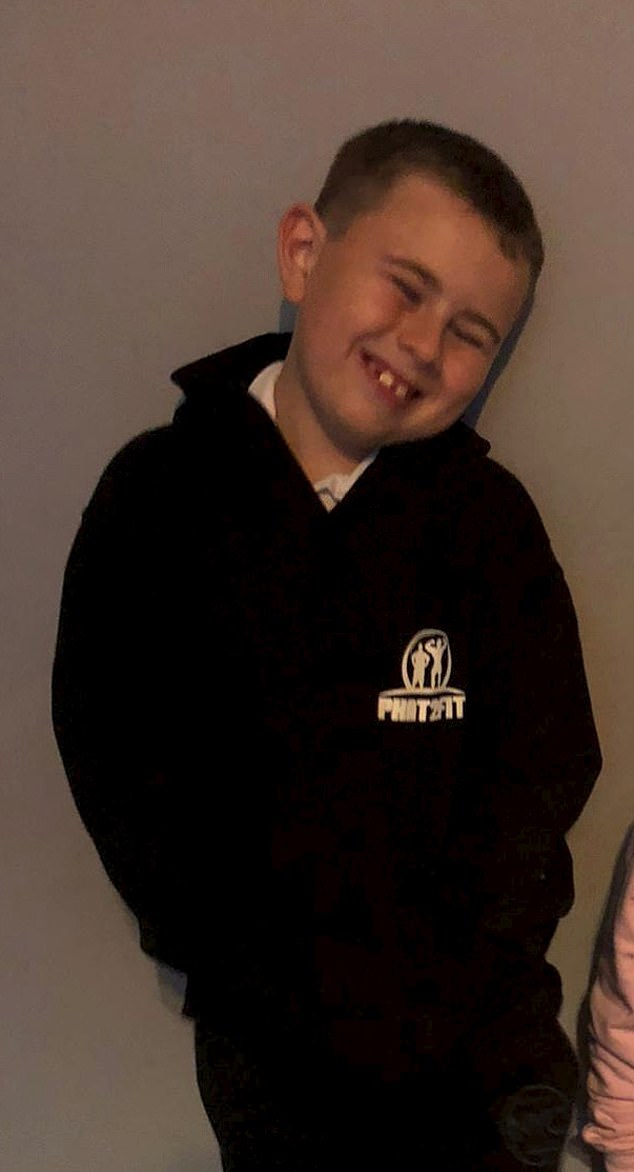 A heart-to-heart with his son Harrison, seven, pictured, where the child told his dad he was doing to die because he was fat, was a wake up call for Matthew

From that moment, Matthew transformed his life in more ways than one.

The next day, he joined a gym and conducted an in-depth fitness research session, ‘determined to do it all on [his] on back. 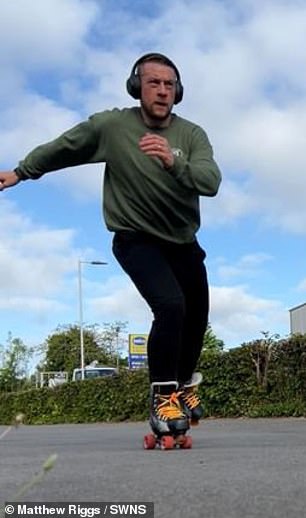 Matthew said he needed to do some cardio but hated running, so he took up roller skating to shed the pounds

‘I realised I was living an unsustainable lifestyle,’ admitted Matthew, ‘I was drinking a lot of alcohol, had a ridiculous diet and was stupid with my food choices.’

‘I would have at least three takeaways from McDonald’s, drink a whole bottle of rum every evening and would be constantly having meals and eating in the office too.’

Having worked in IT for over 20 years, Matthew admits his industry was one of the ‘biggest problems’ for his health.

He said: ‘I have been working in IT since I was 15-years-old – sitting all day, not moving much and constantly eating.

‘So, I decided to start prepping my own meals, cut out alcohol completely and started gymming every single day – because I didn’t realise you were supposed to have rest days.

‘I was losing a stone a month and was feeling amazing.’

Matthew has also been without a drink for 449 days now. 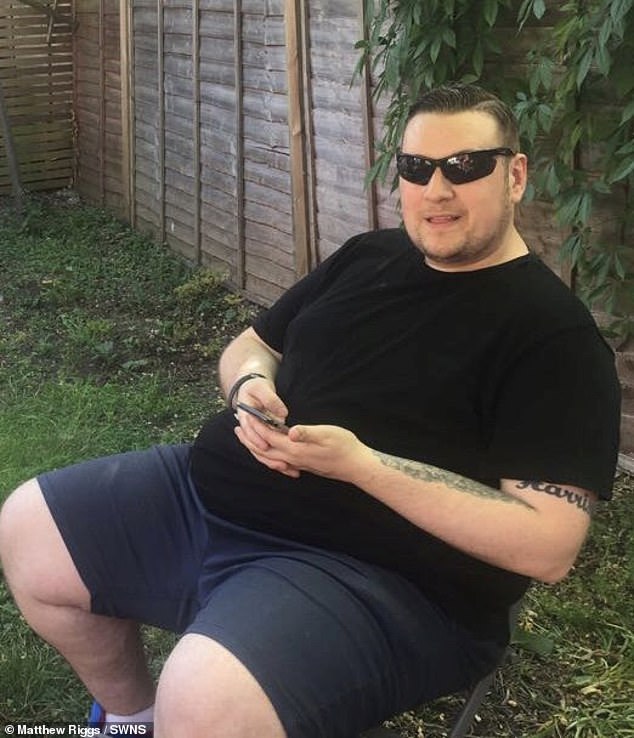 Before his weight loss, pictured, the father-of-two lived a sedentary lifestyle and did not exercise

Matthew decided to lose the weight after Harrison told him his heart was going to ‘explode’ because of his weight . Winning the Elite competition was a ‘surreal’ moment for the dad-of-two. He said he felt it was proving to himself, his son and the world that you can achieve anything if you put your mind to it

His progress at the gym was then met with the announcement of the first Covid-19 lockdown – which resulted in the closure of gyms.

However, more determined than ever, Matthew refused to let what he deemed a ‘minor setback’ halt his progress.

‘I didn’t want to lose determination or rhythm so I carried on training at home and remember finding things in the house I could use to train.

‘I had no weights and everything was either out of stock or so expensive – I was even using the gas ball on the BBQ for squats!’

In the face of diversion, the father to nine- year-old Harrison and six-year-old Emily, embraced creativity and decided to pick up an old hobby from the past. 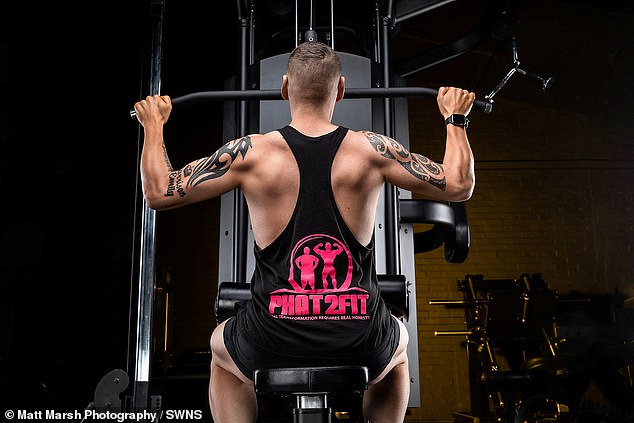 The dad of two started to carve his new body at the gym, pictured, and watched what he ate to get to a healthier weight

‘I thought I needed to do some cardio’, confessed Matthew, ‘hating running, I decided to get my old school roller skates out of the loft from when I was a kid.

‘Within six to eight weeks, I was doing 12.2mile circuits around Essex – burning 1,000 calories per skating session!’

‘It’s all about eating the right foods: a healthy balance of protein, carbs and fat and being consistent in your workouts.’

A year ago, Matthew was inspired to take his fitness to the next level and begun prepping for a stage show.

He said: ‘I used to go to Ripped Gym in Basildon which is known as the training centre for body builders and posers. 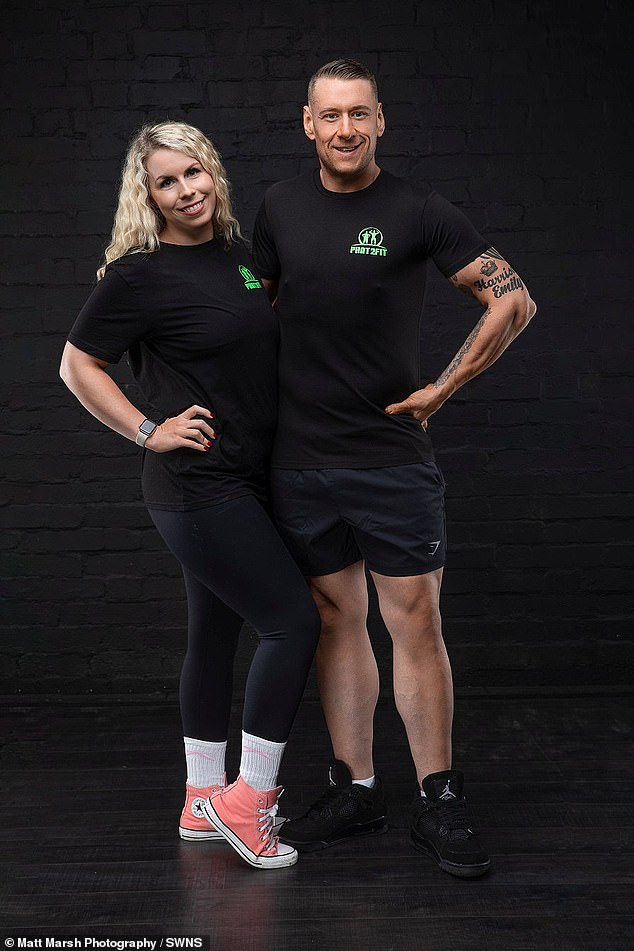 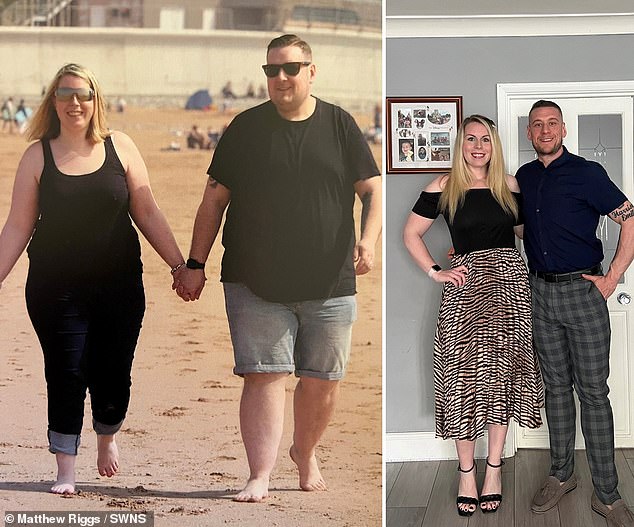 Pictured: Jennifer and Matthew before, left, and now, right. After Matthew lose his 14st, Jennifer went from 16st to 11st 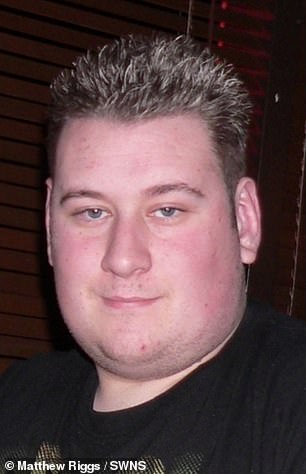 Matthew before the weight loss. He admitted he used to be a regular at his local McDonald’s and gorged on fastfood daily

‘Everyone said I should do it. I had a great chance and wanted to prove to my son that anything was possible/’

One factor of preparation Matthew did not account for was the spray tan, however, as he recalls the experience as ‘extremely awkward.’

Matthew explained: ‘I turned up for my spray tan and the woman gave me a sock.

‘I remember saying “What’s that for?”, but she told me to put it on and come back in the room – I was bright red and mortified.

‘I had the tan done, then was told to sit in another room to dry off – but there must have been about 60 guys in there with socks on!

‘They were just talking to me normally, it was a totally surreal moment and I really thought what the hell am I doing.’

Matthew competed in the Pure Elite Transformation category at Margate Winter Gardens, Kent, on April 2 and came home victorious – proving to himself, his son and the world that you can achieve anything if you put your mind to it.

‘As soon as I put my foot on stage, all my nerves disappeared and I just came to life’, confessed Matthew, ‘all the hard work had come to light and the crowd went crazy.’

The proud dad said he was ‘so shocked he couldn’t move’ when they announced him as the winner.

‘I think the transformation was surreal, considering I’m all natural and have never taken anything,’ said Matthew.

‘Even the judges stood up. It was crazy. 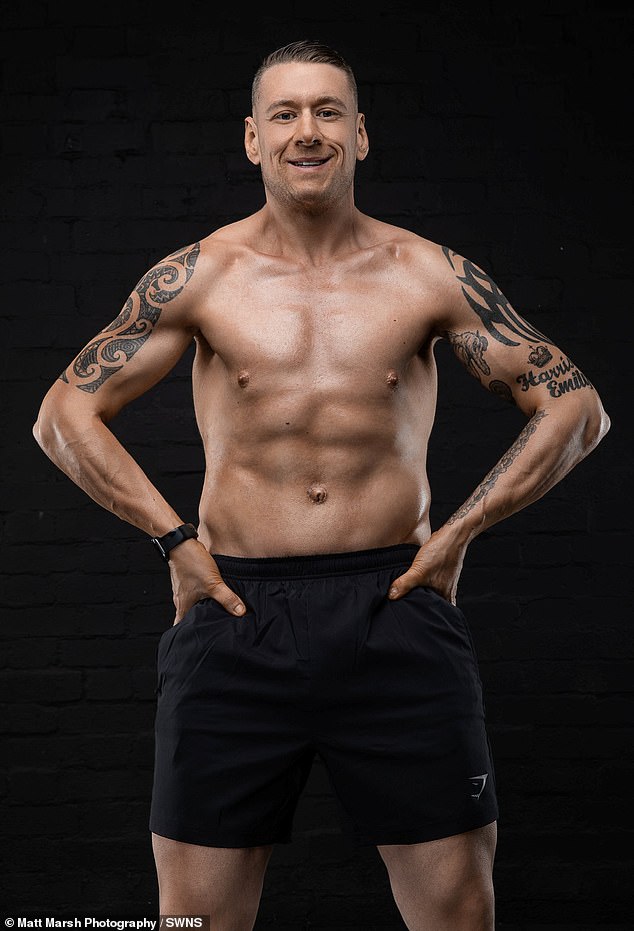 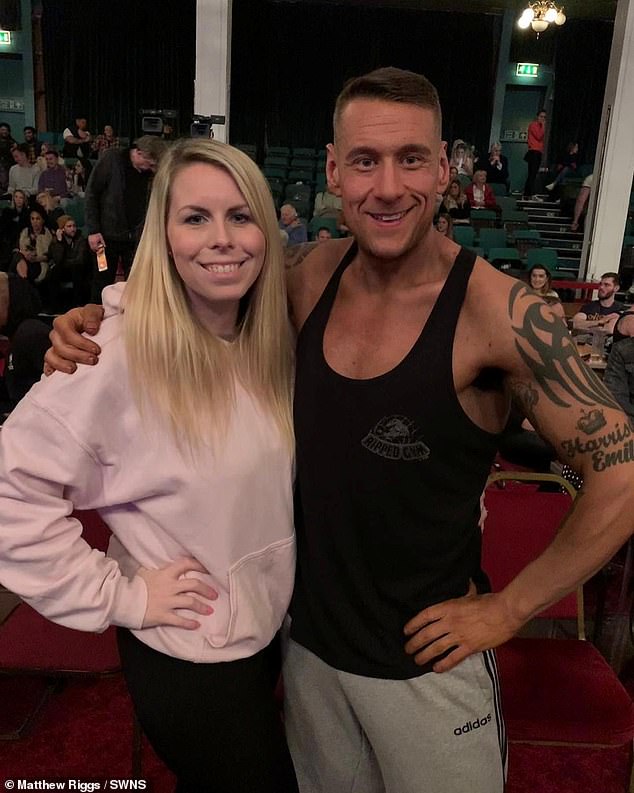 Jennifer and Matthew after he won the competition, Cheeky Harrison told his dad he won because of the conversation they had

‘I saw my daughter at the front of the crowd with a “Go Daddy” sign, and at the end I went up to my son, began trying to do a powerful dad speech saying “well Harrison, what did I tell you.”

‘He then cut me off and said, “Dad, the only reason you’re up there is because of me”!’

Matthew admits since embarking on his fitness journey, his energy is now ‘through the roof’ and he is able to spend more quality time with his family.

‘I have been able to play football with my son, teach my daughter how to roller-skate, tidy the house, help my wife.

‘Before getting healthy I couldn’t be bothered to do anything but now you can’t shut me up! I’m full of beans!’

Matthew’s influence has also transferred to his wife, Jennifer, who has been inspired by her husband to undergo her own lifestyle changes. 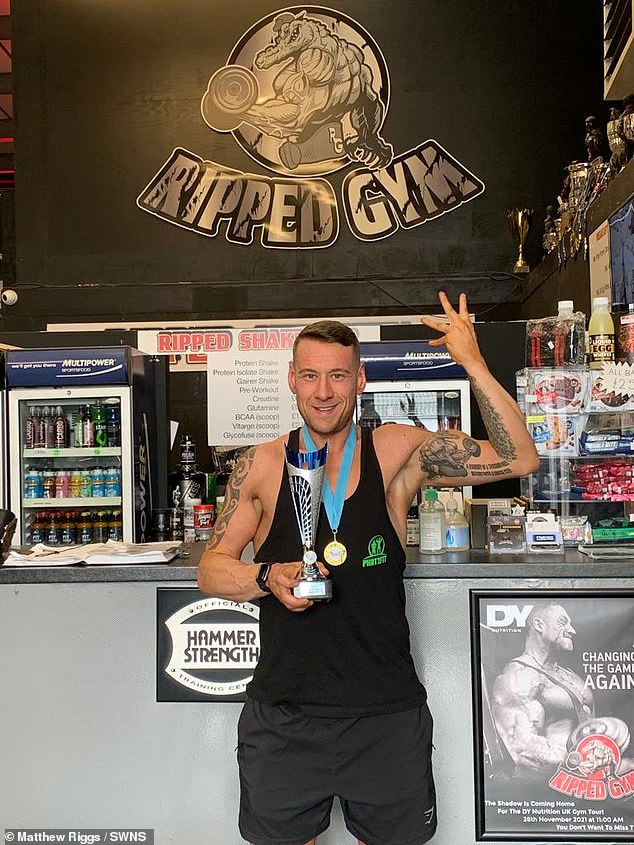 Matthew celebrating at his local gym. He said he advises people who want to lose weight to first change their mindset before anything else

Matthew’s advice for anyone trying to live a healthier life is to first change your mindset before anything else.

‘My aim is to try and motivate people to do what I’ve done but you must begin to educate your mind,

‘If you don’t change your mindset, you’re still going to want to put food in.

‘You can still have evenings where you eat the food but making that effort to motivate yourself and truly transform your life for the better is the best way to start.’

Matthew is planning to push himself into more competitions in the future and is ‘excited’ to see how the rest of his journey will ‘motivate himself and others’.

After dinner:  70cl or a litre of rum

8am – breakfast of porridge, bananas,  protein powder and peanut butter.

12am – lunch (usually consists of turkey meatballs, pasta/rice and veg).

Dinner – pasta, some source of lean protein and veg

The full, inside story of how footy star Kieran Foran turned his life around