The founder of cult gym chain F45 looks set to challenge local real estate records with the sale of his stunning beachside mansion.

Adam Gilchrist, who stepped down from F45 last week amid a share price bloodbath, has put his sleek three-storey beachfront home at Freshwater, on Sydney’s Northern Beaches, up for sale .

When he and wife Eli Gilchrist paid a jaw-dropping $14million to buy it in 2019, they set a record price for the laid-back suburb.

The ultra-stylish designer home became a local legend in 2019 when, after disputes with neighbours over plans for their bungalow at 50 Ocean View Road, the couple settled the matter by simply buying it. 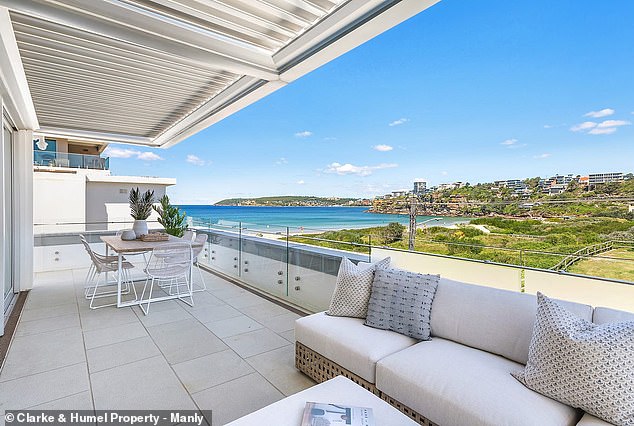 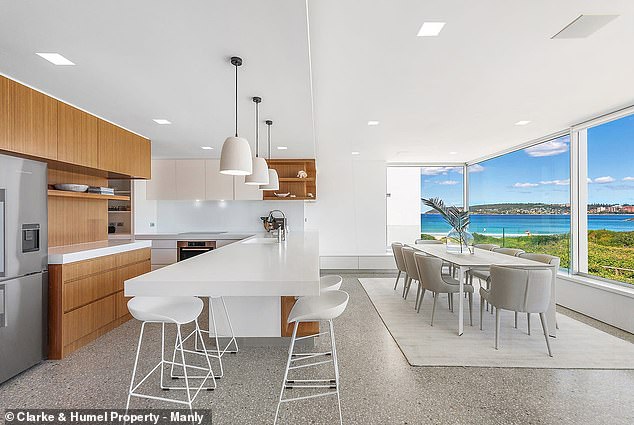 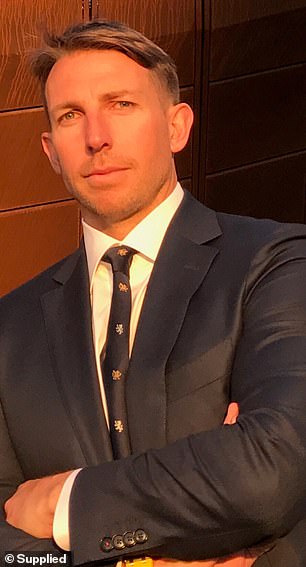 In 2017 the Gilchrists bought 50 Ocean View Road, a California Bungalow, for $5.4million.

While the eventual sale price was considered to be ‘an outlier’ in terms of Freshwater prices, the local market has grown strongly since 2019.

In 2022 the home is listed as a ‘cutting-edge architectural design’, with living space opening via glass stackers to a beachfront balcony.

The ‘state of the art’ luxury residence is set on a 386 square metre block and at the end of a cul de sac just metres from the sand.

According to realestate.com.au, Freshwater house prices jumped 21 per cent in the last 12 months.

While many sellers are bracing for lower offers as the real estate market tumbles, high quality beachfront and harbourfront properties are often insulated from such fluctuations because scarcity tends to dictate. 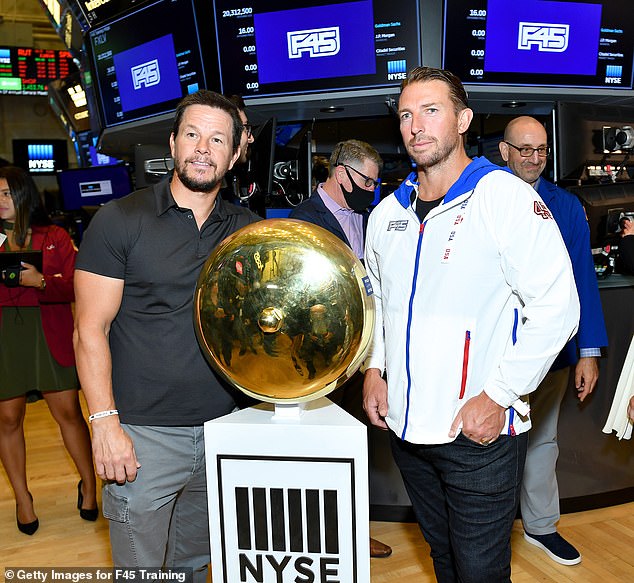 Mr Gilchrist was handed a $10million golden handshake on Friday after stepping down from his role as F45 CEO.

Both are wealthy recipients of golden handshakes, own extraordinary property portfolios and appear to live lavish lives in photos posted Instagram.

Mr Gilchrist stepped side as the company’s share price plunged more than 60 per cent on Wednesday. 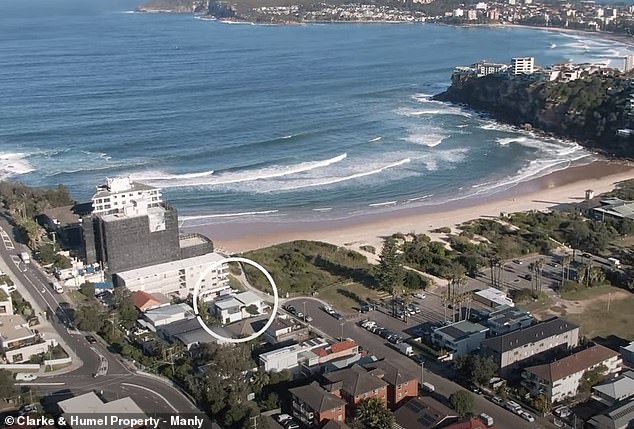 Meanwhile, Mr Deutsch, who ‘transitioned out’ of the company in 2020 with a $US2.5million ‘transaction bonus’, chimed in to note that there was ‘enormous issues’ plaguing the cult gym franchise.

The pair both still appear to live in the lap of luxury with enviable property portfolios. (Another co-founder, Luke Istomin, is famous for being Hugh Jackman’s personal trainer – and his personal life is less well documented).

Mr Gilchrist made headlines in 2021 when he made $500million alone overnight when F45 was listed on the New York Stock Exchange. 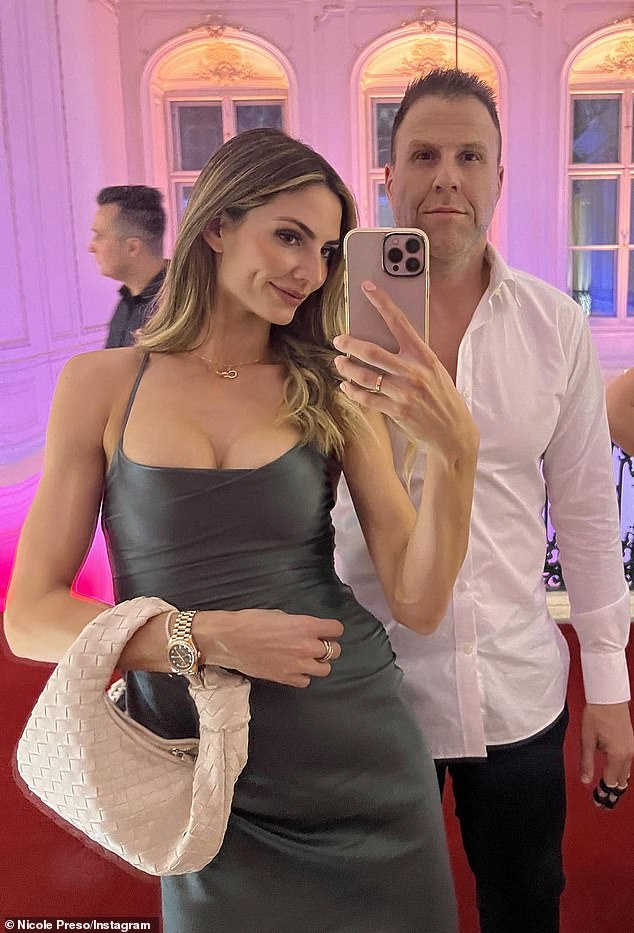 Rob Deutsch (pictured with partner Nicole Perso) flaunts his glamorous lifestyle on social media after receiving a $US2.5million ‘transaction bonus’ for leaving the gym in 2020

The gym founder reportedly owns a number of properties including two homes in the Sydney Northern Beaches suburb of Freshwater, an apartment block in Lennox Head and a beach pad in Byron Bay.

He and his wife purchased their three-bedroom Freshwater cottage in 2017 for $5.4million. He then tried to develop the property for $2.5million, but plans fell through when neighbours complained.

Mr Gilchrist then offered to buy his next door neighbour’s home for $14million in 2018 to settle a dispute. The offer was accepted, with the gym founder owning two homes side-by-side.

Mr Gilchrist also bought an apartment block on Lennox Head in the Northern Rivers region for a total of $6.2million.

He snatched up the four apartments at the complex over a period of three years, buying the first in November 2018, the next two in February 2019 and the last in November 2020. 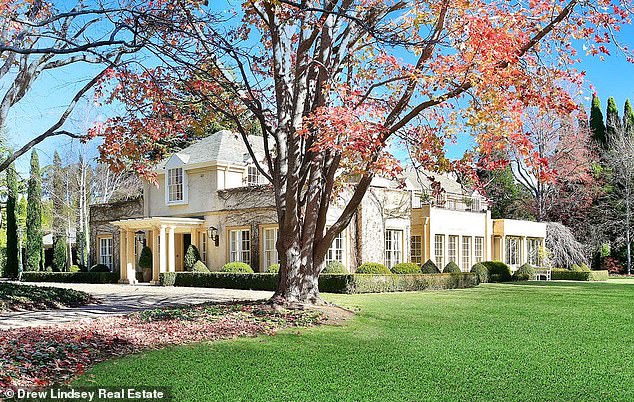 Mr Deutsch also deals in multi-million-dollar real estate, including a luxurious five bedroom home worth over $4million in Burradoo, NSW 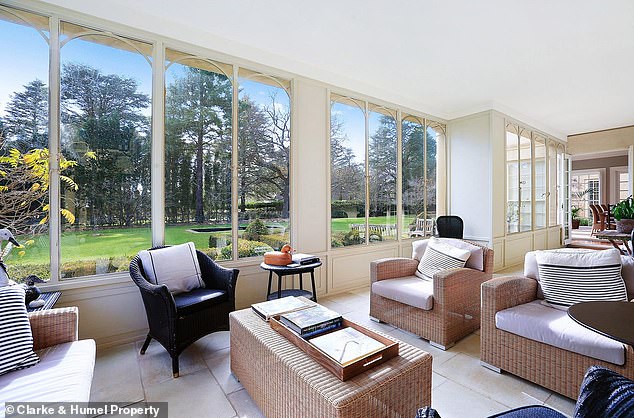 Mr Deutsch owns a formidable property empire that, while not as extensive as his business partner’s, still totals more than $20million

Mr Gilchrist splashed $18.8million on the pad and uses it as a family holiday home.

Likewise, Rob Deutsch has owned a formidable property empire that, while not as extensive as his business partner’s, still totals more than $20million. He sold his beachfront family home in Bronte for $17.7million last April at an auction.

He and wife, model Nicole Person, purchased the four-bedroom, double garage pad in 2018 for $11.2million. 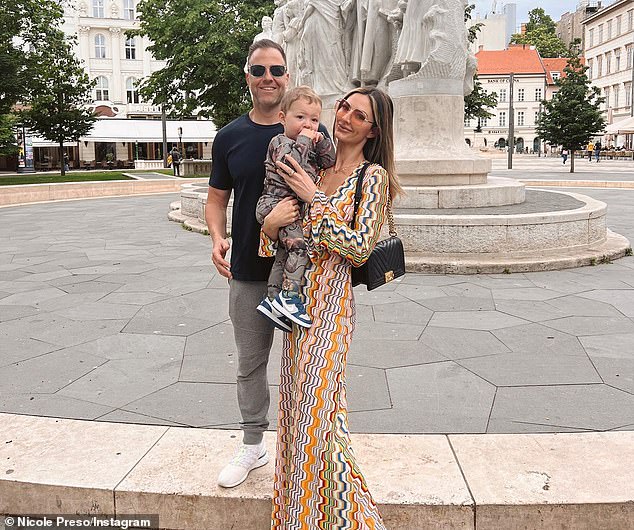 Mr Deutsch and Ms Perso share their lavish lifestyle on their Instagrams (pictured, a family trip to Budapest)

Mr Deutsch owns five luxury apartments a block away from Bondi Beach, four of which he bought after he founded the company.

The four apartments cost him more than $7.2million, while the first one he snatched up when he was younger for $600,000.

There are also two luxury apartments in Coogee that Mr Deutsch splashed $2.1 and $2.125million on in late 2017.

The gym founder provides a glimpse into his life of luxury via his Instagram profile, where he is seen in snaps of his holiday getaways, pics with his model wife and photos with F45 backer and Hollywood movie star Mark Wahlberg. 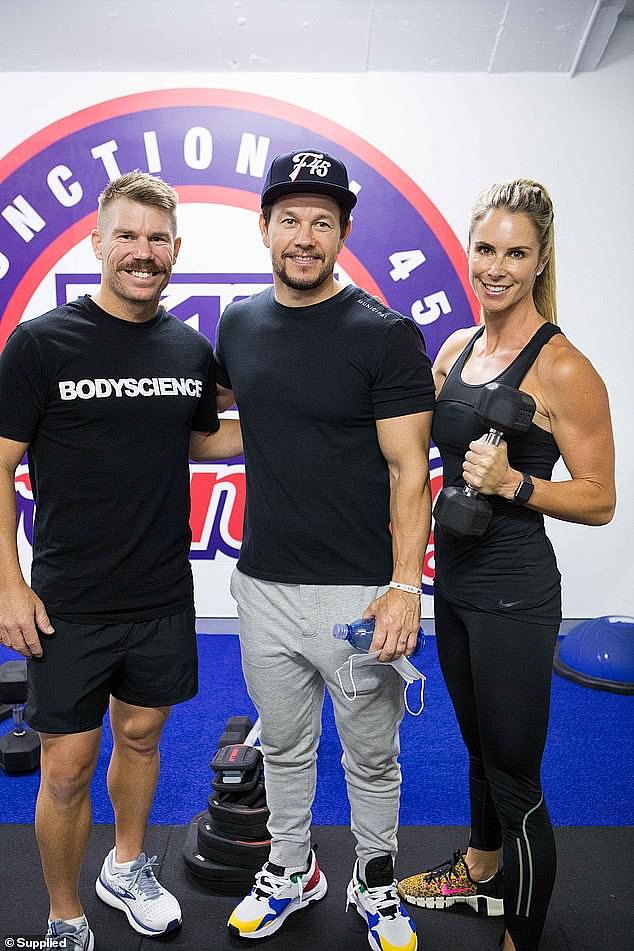 Mark Wahlberg (pictured, centre, with David and Candace Warner) was the second-largest shareholder in the company but managed to sell 1.1 million of his F45 shares in March and April which earned him $17.46 million ($US12.2 million) 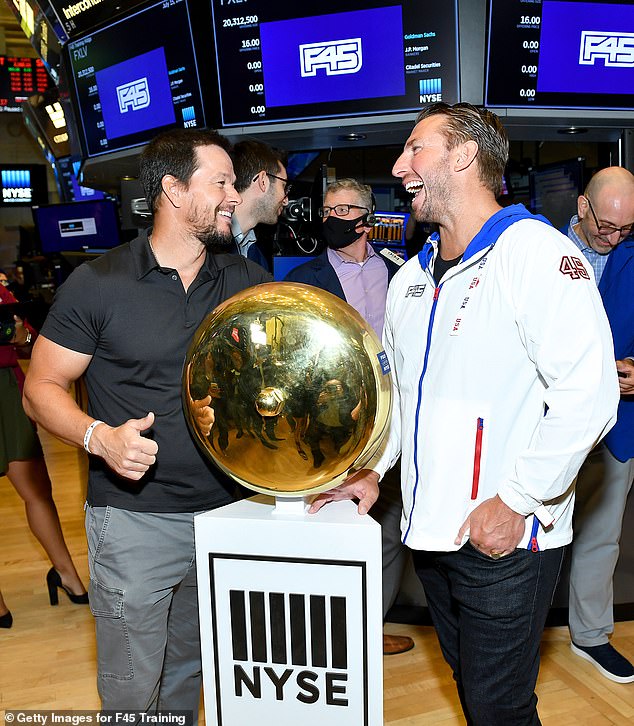 F45 has suffered a stock market meltdown with the company announcing its founder and CEO Adam Gilchrist would be stepping away as chairman (pictured, Mark Wahlberg (L) and Adam Gilchrist (R) on the New York Stock Exchange trading floor on July 15, 2021)

‘I can’t speculate but there are some I’m [sic] enormous issues need fixing first’, he wrote.

In his Instagram post, Mr Deutsch, who stepped down as CEO and sold his shares in 2020, said he could never have anticipated what would happen to his beloved gym.

‘Never in my wildest dreams could I have imagined this,’ he wrote.

‘When I exited, and sold out of F45, I left a healthy, phenomenal, beast of a business.

‘All the way from the company culture to the heart beat of the business… The workouts. F45 was special.’

Mr Deutsch shared his sympathies with the staff who would be let go following the stock plunge.

‘Firstly – thank you to the legends who have reached out!’ he wrote.

‘Secondly – I genuinely hope all of the 110 laid-off staff, find happiness and opportunities elsewhere.

‘For those OG’s, I want to personally thank you for your blood, sweat and tears. You are the reason F45 was special. Time has proven that’.

F45 announced on Wednesday that Mr Gilchrist had stepped down as chairman and CEO with immediate effect, after the company’s share price plummeted by 61.5 per cent. 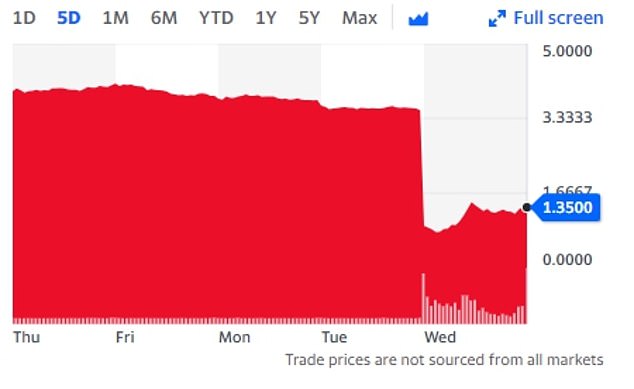 F45 amassed a cult following for its functional, 45-minute group training workouts that combined resistance, metabolic and cardio movements in a fun and accessible environment.

When action star Mark Wahlberg attributed his impressive physique to F45 training, gym-goers across the world were intrigued.

The Daddy’s Home actor frequently promoted the franchise on social media and hosted a number of Instagram Live workouts for his fans and 19.2 million followers.

The outgoing chairman Mr Gilchrest said he was ‘forever grateful’ to the franchise and thanked staff, investors and members for their support. 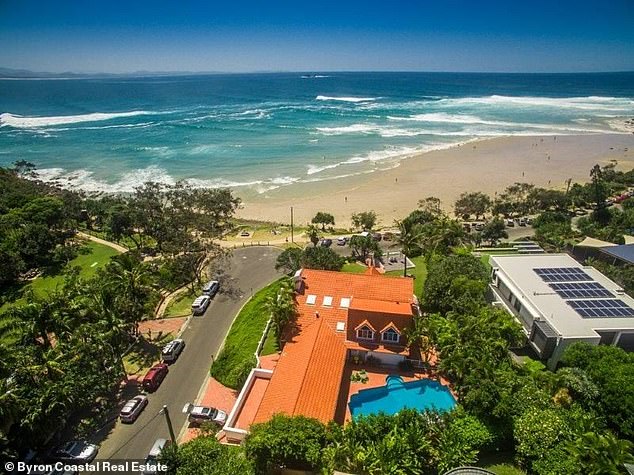 Mr Gilchrist has an extensive property portfolio, including a $18.9 million beach pad in Byron Bay, next to Wategos Beach, which boasts six-bedrooms, four bathrooms and a swimming pool 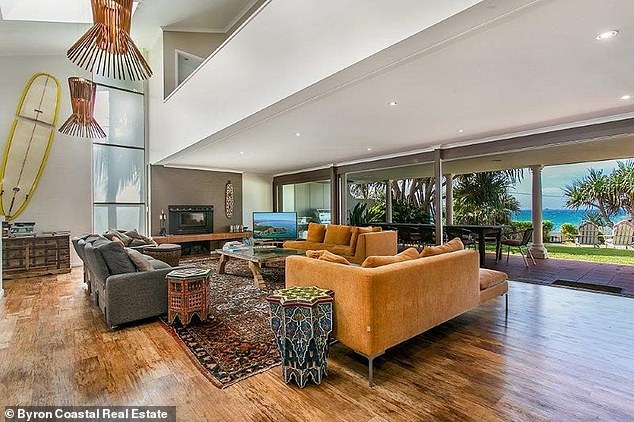 Mr Gilchrist’s colonial-style home broke Byron Bay’s property sale record, which was previously held by the same home when it was sold in 2006 for $15.7 million

‘To the staff that have worked tirelessly since our inception, you have been incredible in your efforts, and I thank you for all of your support,’ Mr Gilchrist said in a statement.

‘To the investors that have joined us along our journey, I thank you for your commitment to F45.

‘Lastly, I am forever grateful to our franchisees who deliver the world’s best workout each day to F45 members around the world.’

Mr Gilchrist will receive more than $10.1 million, which includes 12 months rent on his Florida mansion and 18 months of health insurance for his family, despite the company’s share price crash.

He also boasts a $14 million home in Sydney’s Freshwater, on the northern beaches, as well as an $18.8 million Byron Bay mansion a stone’s throw from Wategos Beach.

Even before Wednesday’s plunge, F45 stock had fallen sharply since it went public on July 15 last year with an initial offer of $22.89 per share.

The company said the change in ‘macroeconomics – national output, unemployment rates and inflation – has forced a restructuring of the company.

F45 confirmed it would lay-off almost 45 per cent of the company’s corporate staff (110 employees) to reduce its selling, general and administrative expenses.