The TikTok star brother of Kansas Chiefs’ quarterback Patrick Mahomes was hit by anti-gay chants of ‘Ma-homo’ while filming a dancing clip at the sidelines of a recent game.

Jackson Mahomes, 21, was subjected to homophobic chants during Kansas City’s 28-24 victory over the Broncos in Denver, Colorado, on January 8.

In a video shared on Twitter, an unseen fan can be heard yelling twice, ‘Hey, Ma-homo, Ma-homo,’ while zooming the camera onto Jackson, who was standing on the sideline in a red Chiefs jacket in what appears to be a brief timeout.

He can be observed ignoring the slurs, while taking pictures of his brother’s fiancée, Brittany Matthews, who heard the anti-gay slurs and snapped, saying: ‘How rude.’

Afterwards, Jackson shared a clip of himself dancing on the sidelines of the game with his 990,000 TikTok followers, but the anti-gay slurs weren’t audible, and he made no comment on them. 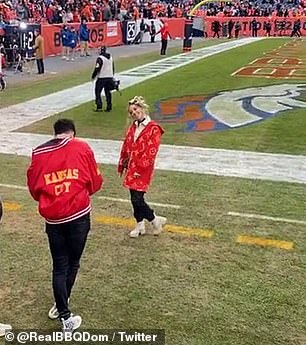 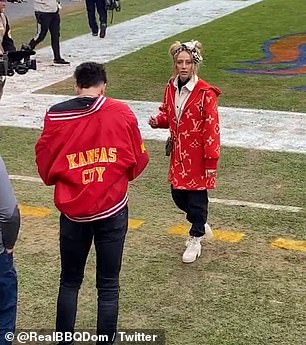 In a Twitter video capturing a snip of the game, a NFL fan can be heard yelling, ‘Hey, Ma-homo, Ma-homo’ twice while the camera zooms in on Jackson Mahomes standing on the sideline in a red Chiefs jacket and his brother’s girlfriend, Brittany Matthews 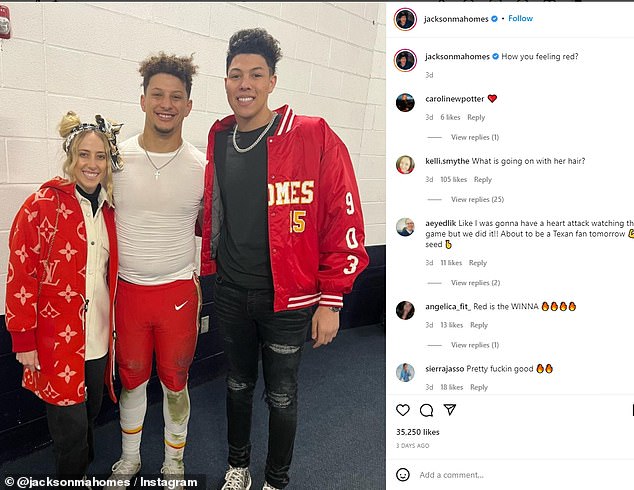 It remains unclear if stadium security got involved and whether the fan was able to watch the rest of the game from the stands.

After the incident, neither Patrick Mahomes not his fiancee commented on the incident on social media. But, they did share field side pictures of the game in Denver on Instagram and Jackson, who is a Tiktok influencer, filmed a seven-second video of him dancing on the sideline.

The moment occurred just a few weeks after a local Kansas City bar blasted Jackson in a Facebook post, claiming he was rude and tried to shut down the establishment because they didn’t have space to sit his very large group.

‘We are sorry that we set boundaries that you tried to ignore. Often times people with un-earned status and a sense of entitlement think they are above the rules and will lash out at the employee enforcing them,’ SOT Social wrote.

‘We are sorry we could not seat your very large group. As you probably saw, our bar is very small.

‘We are sorry that you have the reach that you do, or at least that you think you do and that instead of using it for something positive you decided to use it to try and crush a small business.

‘We survived a global pandemic, we’ll survive your ego.’

SOT Social also hit at Jackson for pouring water on Baltimore Ravens fans after their win over the Chiefs as well as dancing over the Sean Taylor memorial while he was supporting the Chiefs before their game against the Washington Football Team. Both incidents took place earlier in the year, with Jackson taking to social media to furiously complain about what he claims happened. 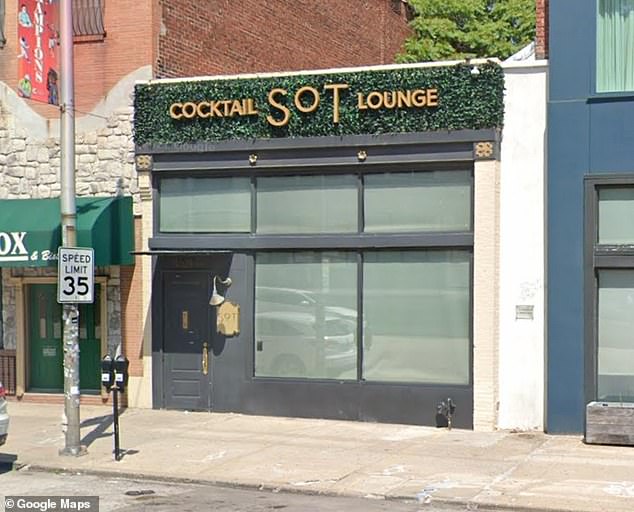 SOT Social bar in Kansas City hit out at Jackson’s entitled attitude for service after arriving to the restaurant with a large party. The bar hit out at the Tiktok star on social media, before apologizing and deleting the Facebook post

‘We are sorry you didn’t reach out to us first before taking to social media, but then again that is an expectation we would have from a mature and rational person, not someone who pours water on fans and dances on the memorials of tragically lost people for TikTok clout,’ the bar added.

‘We have not been fortunate enough to be born into a much more talented and much more famous family but we would like to think that if we did have that much luck- we would use our influence in more responsible ways.’

SOT Social has since released a new apology, apologizing for not using social media correctly, and took down its original post blasting Jackson.

On Tuesday, Matthews arrived in New York City on her private jet, to try on her wedding dress for the first time. She’s set to tie the knot with the Chiefs quarterback sometime this year.