Desperate women are being bombarded with Facebook adverts for costly and contentious menopause treatments during the HRT shortage crisis, the Daily Mail can reveal.

GPs say patients have been asking about vegan products promoted on their news feeds that are sold as ‘a new way to tackle the menopause’.

But experts warn women to be wary of ‘exaggerated’ claims about items ‘not as effective’ as HRT and sold at almost triple the price of an NHS prescription.

One advert seen by the Mail featured a product that is not approved by the UK medicines regulator and not recommended by the British Menopause Society owing to safety concerns.

The Mail is campaigning to end the HRT crisis and our manifesto calls for pharmacists to be allowed to dispense substitutes if prescribed HRT is out of stock.

An advert for MenoFriend, an £18.99 supplement made by ‘plant-based’ firm Dr Vegan, features testimonies claiming it alleviated symptoms within a week.

A Facebook advert for a month’s supply of Feel Menopause at £26.35 describes the supplement as ‘a new way to tackle the menopause’. Both products contain plant-based compounds which ‘show little value’ in combating symptoms, according to the British Menopause Society (BMS), the authority for menopause health in the UK. 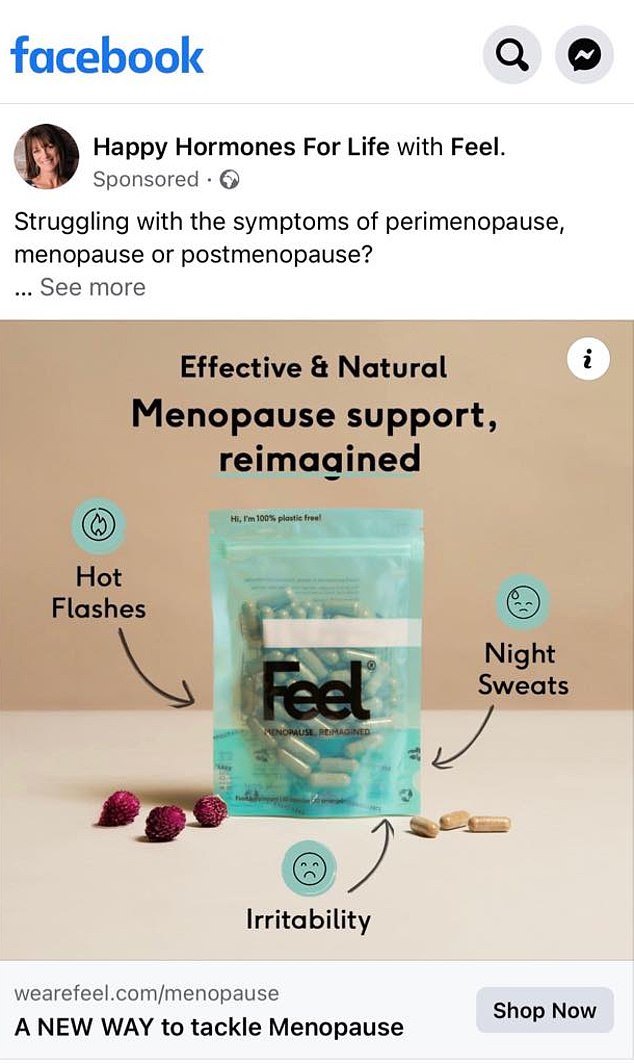 Another ad features a cream made by Guernsey-based firm Wellsprings and sold for £24.99 that claims to relieve menopause symptoms ‘without the side effects often experienced by common HRT treatments’. It is a type of ‘compounded bioidentical hormone replacement therapy’ not regulated by the Medicines and Healthcare products Regulatory Agency in the UK.

The BMS does not recommend it due to doubts over efficacy and safety. BMS chairman Haitham Hamoda said: ‘I would not go anywhere near this product.’

A spokesman for Meta, Facebook’s parent company, said it had removed ‘the violating ads’.

Wellsprings managing director Trevor Taylor denied that the firm was ‘profiteering’ from the HRT shortage and said the firm had been active on social media ‘for many years’.

A Dr Vegan spokesman said that advertising of MenoFriend on social media has not increased since HRT shortages kicked in.

A spokesman for Feel said the company does not claim its product can ‘cure’ menopausal symptoms or that it advises customers to forgo HRT. Both Feel and Dr Vegan said their adverts had not been removed from Facebook.

US Open: Sportsmail brings you the highs and lows of this year at Brookline in Massachusetts

‘A path I’m choosing not to take’: Matthew McConaughey announces he WON’T run for governor of Texas