Six people including an infant, a pregnant woman and her unborn child have been killed in Los Angeles after a car ran a red light and smashed into oncoming traffic.

The vehicles crashed into a gas station at the intersection at around 1:40pm on Thursday, injuring a further seven.

Three of the vehicles burst into flames following the crash.

The accident happened at the corner of South La Brea Avenue and Slauson Avenue. 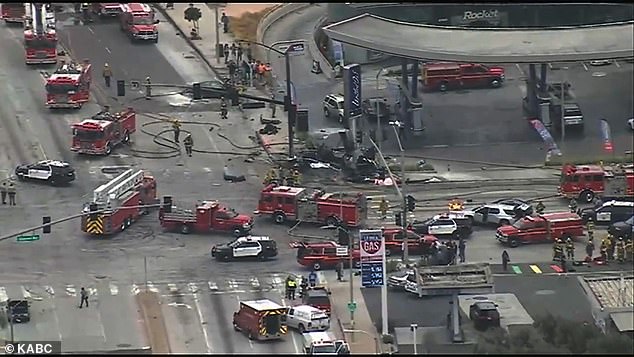 Police were called at 1:40pm on Thursday to a car crash in the Windsor Hills area of Los Angeles

Photos showed the burnt-out hulls of the vehicles.

Two of the burned cars came to a stop under a fuel station sign.

Another appeared to have rolled onto its roof near the gas station entrance.