Police body cam footage captured the dramatic moment firefighters broke through a window to rescue a three-year-old from a family’s burning trailer home.

Noelle Guy was woken up by a ‘popping’ sound to find her mobile home on fire on Sunday at around 12:45 a.m. She said she’d rushed to save her stepmother Kim Guy, suffering serious second and third degree burns in the process, but hadn’t been able to reach her toddler, M.J. Sancinati-Struck.

She called 911 and fire crews and police quick arrived on scene. Body camera footage shows several police officers rushing to one of the home’s windows as they attempted to locate M.J., 3.

Suddenly one spots the boy and calls over the other emergency responders.

The cops then instruct the three-year-old to come to the shattered window but it appears the terrified little boy was unable to.

Firefighters then entered the room, braving the smoke and flames, and carried M.J. out to safety. He was rushed to a nearby hospital for treatment.

The West Allis Fire Department later determined that the fire started due to an electrical issue on the home’s front porch, according to Fox6 News Milwaukee. 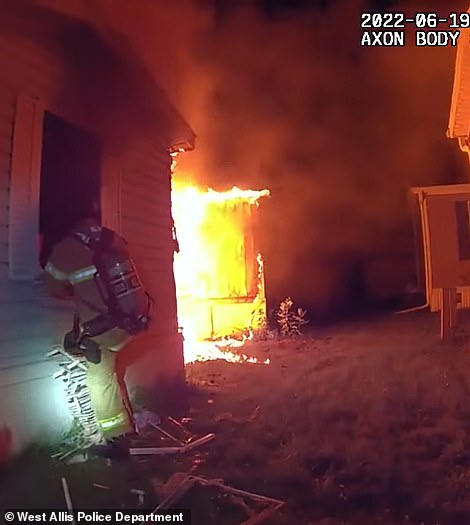 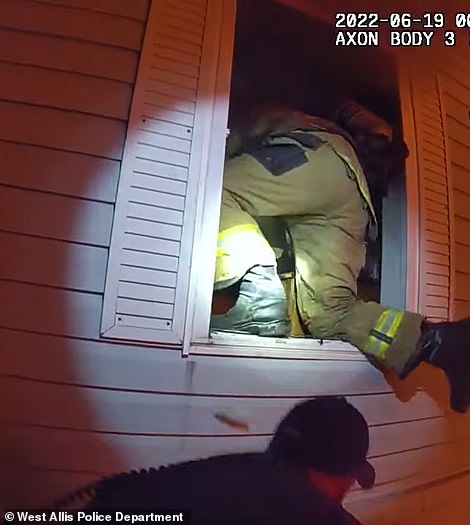 M.J. Sancinati-Struck, three, was rescued by firefighters and police officers in West Allis, Wisconsin, in the middle of the night on Sunday after his family’s trailer home caught fire 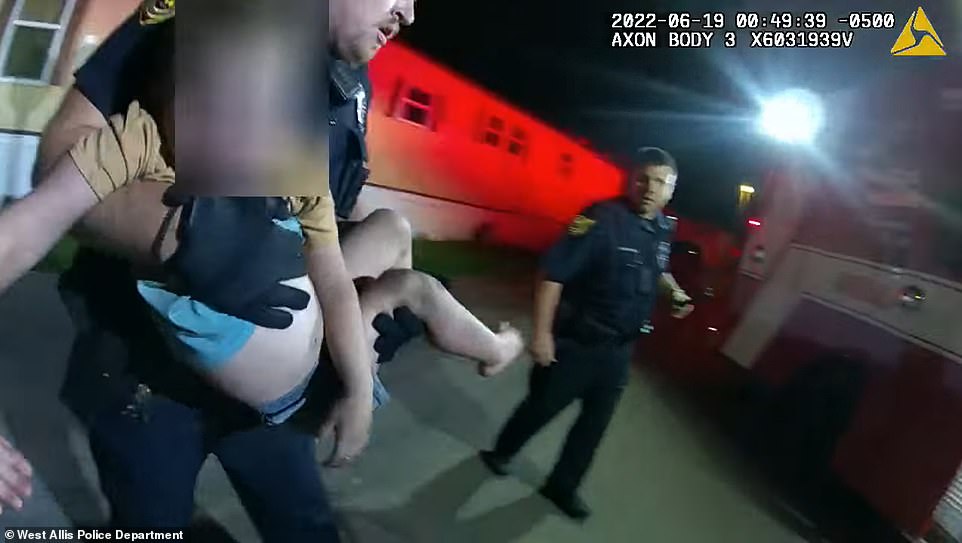 After finally getting MJ out of the burning home, MJ was carried and rushed to an ambulance (pictured). The boy suffered from carbonado poising in the aftermath of the blaze 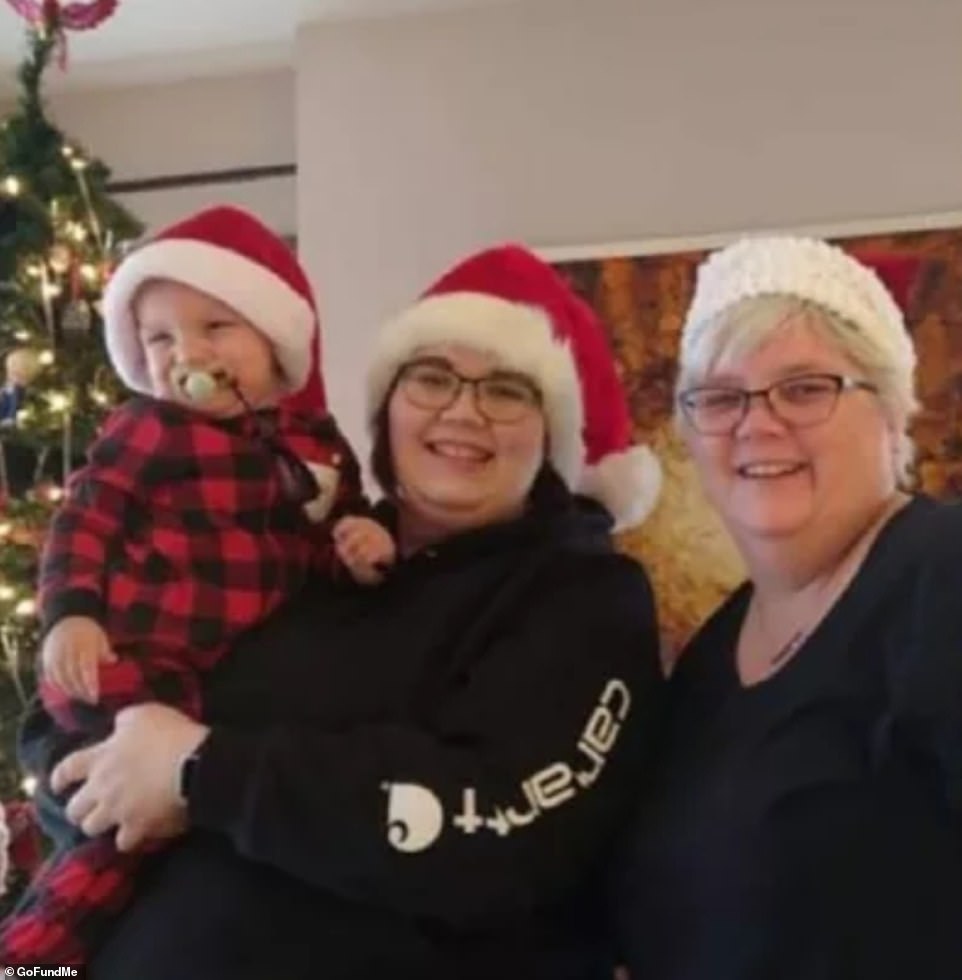 MJ, his mother Noelle Guy, and her step-mother Kim came out of the fire alive after waking up to it in the middle of the night on Sunday. Noelle is currently suffering from second-and-third degree burns while Kim is in a medically-induced coma. She also has pneumonia and is COVID postitive

He is believed to be in stable condition after suffering from carbon monoxide poisoning, according to the family’s GoFundMe Page. He is hooked to a ventilator for the time being.

The GoFundMe has already raised almost $6,000 to replace the family’s home and all their possessions as well as medical costs.

‘I just want to thank them for getting my kid out safe,’ Guy told CBS58, referring to the police officers and firefighters who managed to rescue her son. She added that her son did not suffer any burns and was in a closed room at the time of the fire.

‘That’s pretty much the only room that didn’t get any fire to it. My dad pretty much said, ‘Not on my watch,” said Andrew Kreblin — M.J.’s uncle — who helped set up the family’s Go Fund Me page. The room was once occupied by Kreblin’s father before he passed away.

Noelle was also taken to hospital before being released and is suffering from second-and-third degree burns.

Kim, the boy’s grandmother and Noelle’s step-mom, is in a medically induced coma, according to the family’s Go Fund Me page.

‘My mom’s in worse condition than my son,’ Noelle told WTMJ-TV. ‘If I did not wake up, we would probably not be here today.’ 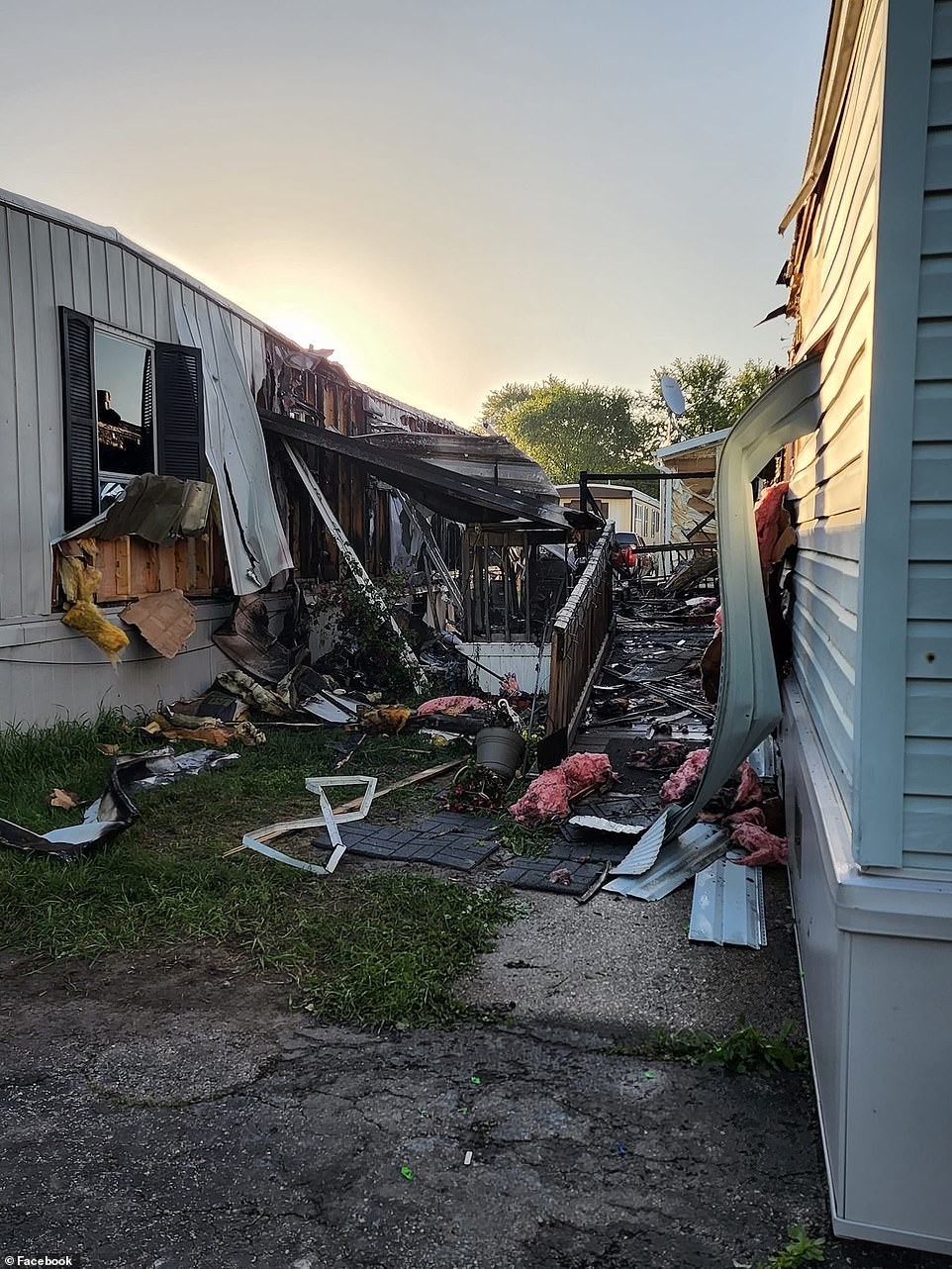 The family of three lost everything in the fire, which local authorities believe was caused by an electric malfunction in the home’s front porch

She further revealed that her step-mother tested positive to COVID-19 and has pneumonia.

‘I literally bawled my eyes out,’ the single mother said after watching footage of her son’s rescue.

West Allis police said the rescue took six minutes. The family lost the entirety of their home as a result of the blaze. It remains unclear if the family were owners or renters of the home.

‘My sister and step-mom work very hard for everything they had,’ Kreblin wrote on the fundraiser page. ‘My sister is a single mother with the biggest heart I know. Anything would be greatly appreciated.’

DailyMail.com has contacted Kreblin for further details regarding the incident.

Tottenham 'ready to demand over £20m for Steven Bergwijn from Ajax'

Italian husband, 81, is acquitted of murdering his wife after blaming it on a fit of jealousy

NoLA grandmother, 73, killed after she was dragged and her arm was SEVERED by seatbelt in carjacking