Bring back the burbot! Fish not seen in the UK since 1969 is set to be reintroduced in ‘rewilding’ project

A fish not seen in British rivers since 1969 is set to be reintroduced.

The burbot is the world’s only freshwater cod species and once thrived in eastern England. It is thought to have died out due to farm pollution.

The Norfolk Rivers Trust hopes to reintroduce the bottom-dwelling fish – which can be eaten – to the River Wissey and Great Ouse catchment in two to three years using European stocks.

It will be the latest vanished species to be ‘rewilded’ to the UK, following in the wake of the release of beavers and white tailed eagles.

It was once so common that a records show it was used to feed pigs, burbots eat smaller fish such as minnows and bullheads.

The fish became extinct in the UK as rivers became straightened, depriving them of their habitat in the shallows and bends, as well as chemical pollution.

A possible bonus of reintroduction is that they also eat crayfish – so may help control the invasive signal crayfish which is taking hold in parts of the UK. 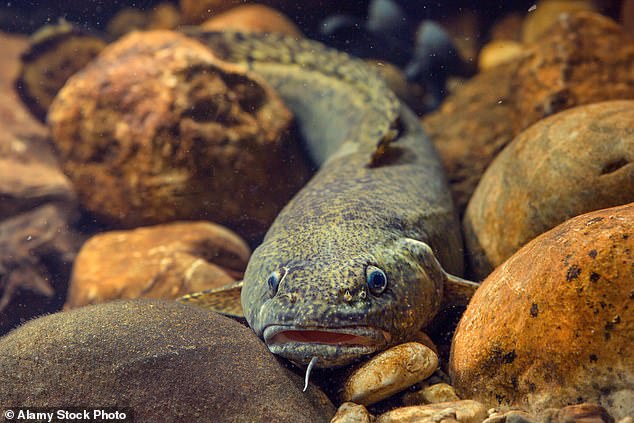 The Burbot, pictured, has not been seen in British rivers since 1969 and could be reintroduced by the Norfolk Rivers Trust

The Norfolk Rivers Trust said they are planning to go ahead with reintroducing the fish in the county.

The trust’s technical director Dr Jonah Tosney said that the project had been ten years in the planning.

‘It’s a British species that has been here since the Ice Age, and it’s been lost within living memory. For me that’s a perfectly good reason to bring it back.

‘They are a big part of the ecosystem, everything will feed off the burbot: herons, otters, eels, trout, kingfishers, pike.’

He added that burbot probably survived into the 70s, even though the last know catch was in the 60s, and is now in a museum.

Unlike other species reintroductions, there is very little objection against their return, in contrast with other species such as white tailed eagles.

‘We are hopeful of getting them in rivers in two to three years.

‘We will do two years of habitat improvement work, and there’s a lot of getting consent and permission to release them from Natural England and CEFAS (Centre for Environment, Fisheries and Aquaculture).

Dr Tosney said he was looking at sites such as River Wissey and Great Ouse catchment.

This is the culmination of more than a decade of work, with University College London and Southampton University Burbot range in weight from a few ounces to 2lb.

The biggest-ever European burbot was landed in Sweden, and weighed 18lb 12oz.

It is not the only fish that conservationists hope to reintroduce: the sturgeon, which has not been seen in British waters since the 1930s is also a candidate for rewilding.