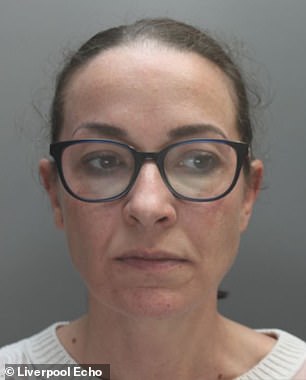 Callous carer Clare Roughley, 39, stole more than £325,000 from her elderly relatives and a vulnerable woman she was supposed to be looking after to fund her habits

A shameless fraudster delivered the eulogy at her own grandmother’s funeral despite secretly draining her £58,000 estate to fund her gambling addiction, a court was told.

Callous carer Clare Roughley, 39, stole more than £325,000 from her elderly relatives and a vulnerable woman she was supposed to be looking after to fund her habits.

She even stood in front of friends and family and delivered her eulogy to her gran Theresa Leyland while loved ones listened unaware of her deceit, Liverpool Crown Court heard.

Liverpool Crown Court was told she took £58,221 from her dementia-suffering gran’s estate and even took money that was supposed to fund her funeral.

Although Theresa, who died aged 95 in 2019, bequeathed Roughley £6,000 in her will, she used up all the funds in her estate while her funeral was unpaid for 10 months.

The court heard she used her experience as a bank manager to con her parents and grandparents out of their life-savings.

She also fraudulently set up a credit card in the name of quadriplegic woman for whom she had cared for seven years.

Roughley, who previously pleaded guilty to four counts of theft and one count of fraud, was yesterday (Mon) jailed for seven years by Liverpool Crown court.

The court was told she targeted her victims over a six year period to fund her ‘all-consuming gambling addiction’.

Peter Hussey, prosecuting, said she took control of her father Raymond Roughley’s bank account without his knowledge in 2014.

She preyed on his vulnerability and lack of financial awareness to consistently deposit his money, he said.

The former council worker, 64, believed his £50,000 life savings and pension schemes meant he could live out his days comfortably and without financial worry.

But his ‘whole world was turned upside down’ as he learned his daughter – whom he trusted completely – had reduced his life savings down to zero, he said in a statement.

Roughley carried on her deceit until her arrest in March 2020 and deposited a total of £91,437.83 out of her father’s bank account, the court was told.

Mr Hussey told the court that during the same period, she also stole £158,738 from her mother Delwyn Roughley’s bank account.

He said: ‘Roughley manipulated her parents’ bank accounts, took advantage of their financial naivety and used her knowledge of the banking system to steal from them.

‘Her parents have found it incredible and devastating that their daughter could do such a thing and their worlds fell apart since the discoveries.’

Both her parents are now on anti-depressants and anxiety tablets as they come to terms with their daughter’s crimes, the court heard.

Roughley, of St Helens, Merseyside, also stole from Jean Almond, 70, who is quadriplegic and suffers from multiple sclerosis.

Unable to use her arms, Roughley was entrusted as the only member of the care team to have access to Mrs Almond’s accounts.

She syphoned £17,200 from Mrs Almond and created a fake account to deposit a further £8,698 of funds into her own bank.

The court heard Mrs Almond and her husband Geoffrey have been ’emotionally affected very deeply’ and have not found another carer due to a complete lack of trust.

The court heard Roughley duped two friends and used their PayPal as an additional means to transfer funds from her victim’s accounts to her own.

Jeremy Lasker, defending, said while there was ‘no excuse’ for what Roughley did, the purpose of her actions was ‘not to live a life of luxury but to fund a gambling addiction’.

He told the court: ‘What began as a flutter grew and grew into an all-consuming addiction that took over her life.

‘When she was arrested, Roughley was actually relieved as she couldn’t see any way out.’

Judge Imran Shafi sentenced Roughley to four years for each count of theft running concurrently and two years for her charge of fraud to run consecutively.

He told her: ‘This is an exceptional case where each victim in their own way is vulnerable and deserving of being treated with respect.

‘Through your charm and deceit you have systematically stolen every penny from their accounts and left them penniless and in debt.

‘In respect to your father, he is traumatised that this has happened by his own daughter.

‘You have wreaked utter carnage on your victims who continue to have psychological harm impacted on them.

‘While online gambling companies need to be aware of the destruction they can cause this can only be a custodial sentence.’

Boy, 3, is killed in drive-by-shooting in Charlotte