Goldman Sachs has settled a lawsuit filed by a former intern who claimed that he was hazed by his boss so severely he was left with lasting brain damage.

Patrick Blumenthal interned for Goldman Sachs in San Francisco from September 2017 through February 2018.

The settlement, first reported by Bloomberg on Friday, came a week before a hearing on the investment bank’s request to dismiss the lawsuit.

Terms of the settlement were not disclosed in a filing in San Francisco Superior Court.

‘Goldman Sachs has no comment on this matter,’ said Maeve DuVally, a spokeswoman for the bank. 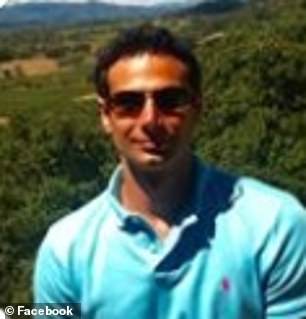 Patrick Blumenthal has settled a lawsuit filed in February 2020 against Goldman Sachs and his boss at the bank, claiming he was viciously and violently hazed in 2018

While working with the company, Blumenthal was assigned to ‘Team 007’ under the leadership Julius Erukhimov, a private financial wealth advisor for Goldman Sachs nicknamed ‘Fast Julie’.

On February 9, 2018, Blumenthal went for a drink after work with around a dozen of his co-workers.

Erukhimov, according to Blumenthal’s suit, told the Drexel University student he would ‘teach him how to drink,’ and then he started pounding on the bar until the bartender told him to stop.

Erukhimov then allegedly punched Blumenthal in the stomach and asked him to punch him back.

Blumenthal declined, then Erukhimov punched him again, wrestled with him then dragged him outside in a chokehold.

Erukhimov allegedly held him ‘so long’ in the choke hold that he ‘thought he was going to die.’

Blumenthal said that none of his colleagues stepped in to help him, and senior managing directors ‘simply sat and watched the brutal attack unfold.’ 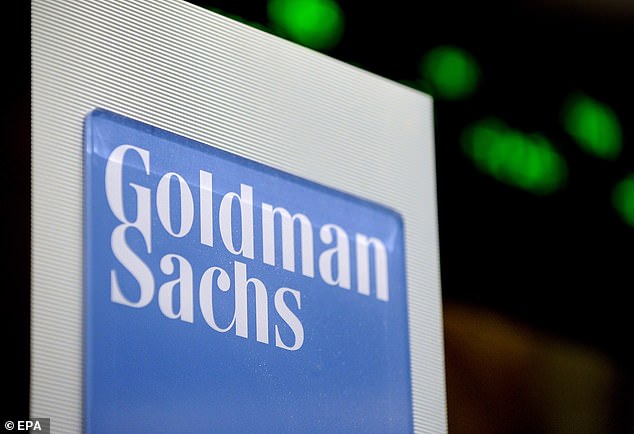 Blumenthal interned for Goldman Sachs in San Francisco from September 2017 through February 2018, according to a suit he has filed against the company 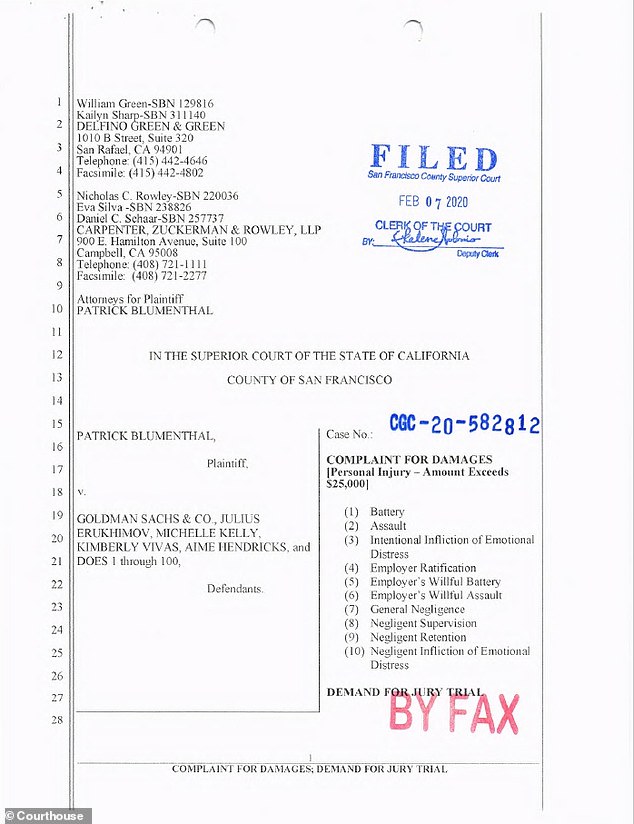 Erukhimov and Goldman Sachs are listed as defendants in the case, which has been settled

Blumenthal passed out and urinated on himself in what his lawyers said was ‘a bodily response to prolonged oxygen deprivation.’

When he came round Erukhimov took him home to his apartment, gave him painkillers and warned him not to tell anyone, according to the suit – claiming his uncle and cousin were ‘contract killers’ for Russian oligarchs.

In his complaint, Blumenthal said he feared for his life because Erukhimov had also previously told Blumenthal about his ‘extensive gun collection,’ including assault rifles, and about how his cousin had left a bouncer at a nightclub in ‘a vegetative state’.

Two days later, Blumenthal went to the hospital, where he claimed he was diagnosed with a ‘hemorrhagic stroke.’

In his suit, filed in San Francisco County Superior Court in February 2020, Blumenthal said that he continues to suffer from some of the side effects of the incident such as PTSD, mental anguish, a brain injury, and physical pain which may be permanent. 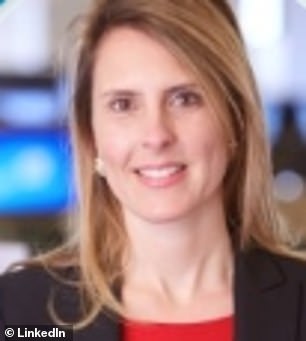 The intern was ‘terrified to speak’ about what transpired, eventually emailing Kimberly Vivas – a business-unit manager at the bank – about the incident on March 26, 2018. She told him to email an HR rep in New York

Erukhimov and Goldman Sachs are listed as defendants in the case, which Bloomberg reported on Friday has now been settled.

The court documents claim that the hazing began months before.

‘On multiple occasions, Julius was very physically aggressive with the Plaintiff,’ the filing states.

‘On one occasion, Julius threatened to punch Plaintiff if Plaintiff didn’t tell him something that someone had said about him. It was well known at Goldman Sachs that Julius had a habit of getting drunk and punching people.’

Even prior to Blumenthal starting the internship, there were allegedly complaints about ‘Julius’ hazing and ‘frat’ behavior that were reported to managing agents at the company.

Blumenthal claimed that he was treated as a fraternity ‘pledge’ and that his nickname, ‘Bloomy,’ was pronounced ‘Blew Me.’

He alleged that he went to a kickball party in Fort Mason in San Francisco and was pressured to drink, despite being underage.

He wrote he ‘was teased and made fun of’ and told to expect to take ‘an infinite amount of s*** from people.’

Blumenthal said that Erukhimov gave him Adderall and Tums, telling him it would help him drink more.

After a few months, Blumenthal asked Michelle Kelly, who had hired him, to allow him to switch to another team.

He claimed Kelly acknowledged he was being treated ‘poorly,’ but she did not reassign him.

A frightened Blumenthal reported the incident to Kimberly Vivas, an HR executive, after a month, on March 28, 2018.

The HR executive replied on April 22, 2018, saying that they had ‘taken actions we have deemed appropriate.’

He said he was never interviewed by anyone about the incident, and claimed Goldman ‘swept this brutal attack under the rug and never spoke of it again.’

The bank said that he did not reply to an offer of an interview regarding the incident, but Blumenthal’s attorney said he had no recollection or evidence of any communications.

‘No disciplinary measures were ever taken by Goldman Sachs, thereby approving and ratifying Julius’ conduct,’ the filing adds.

Blumenthal did not return to work at the company.

Blumenthal claims that the hazing occurred at various Goldman Sachs across the world, including having four first-year associates having to dress as Teletubbies.

Others were forced to attend meetings where they had to regurgitate the company’s history in order to get a decent performance evaluation.

Blumenthal was seeking more than $25,000 in damages.

In a statement to Business Insider when the case was filed, the company claimed that it had ‘tried unsuccessfully to obtain more information’ from Blumenthal.

They added that they were ‘committed to maintaining a safe and welcoming workplace, asserting that ‘the alleged behavior does not reflect our values.’

Lawyers for Goldman Sachs argued in court filings that the company wasn’t liable for the intern’s injuries.

‘That evening, Mr. Blumenthal went out drinking with some of his co-workers from Goldman Sachs after attending an in-office happy hour,’ they wrote.

‘While out, he was ‘playing around’ and ‘wrestling’ — his words, immediately after — with one of his colleagues when he fell and hit his head.’

They added that Erukhimov was no longer employed at Goldman Sachs.

According to his LinkedIn, he now works at J.P. Morgan in San Francisco, as a vice president.