The track records of movie sequels and television reboots of 90’s sitcoms are littered with flat-out failures.

Generally retreads are more indicative of lazy Hollywood dimwits trying to recapture past glory than of any compelling reason to regurgitate old ideas.

Did you ever see The Hangover Part II? How about Part III?

But now, two prominent Democrats are giving the reboot treatment to Hillary Clinton for president!

In a recent Wall Street Journal opinion piece they made the argument – even going as far as claiming that she could run as a ‘change candidate.’

Right… because the plot to Rocky V really evolved from the original.

The only possible compelling part of this desperate idea is that it renewed speculation over another Trump/Clinton showdown.

But just like tired old Tinseltown remakes, this potential political rematch begs the question – Is anyone asking for this?

Though if I had to handicap it, I’d say Hillary in 2024 would be a box-office flop of epic proportions.

It is understandable that the Democratic party is doing some soul searching right now.

After all, Joe Biden is 79 years old and spends most of his time talking to a teleprompter inside his fake White House set.

A recent Quinnipiac poll has his approval rating at 33%. His Build Back Better agenda appears to be going nowhere. 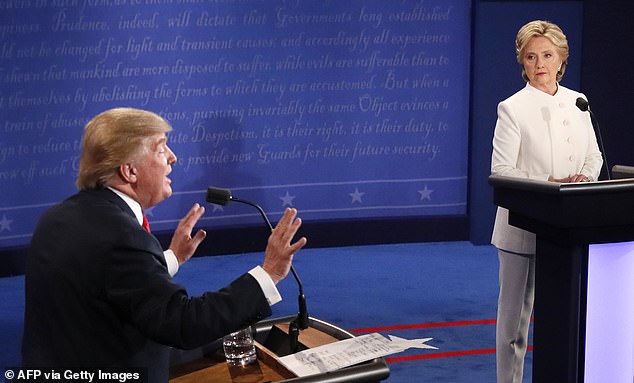 The only possible compelling part of this desperate idea is that it renewed speculation over another Trump/Clinton showdown. (Above) Trump and Clinton face off in final presidential debate on the campus of the University of Las Vegas on October 19, 2016

The President has not held a full press conference in more than 70 days, and despite talking a big game, he is far from shutting down the virus.

As for his heir apparent?

Vice President Kamala Harris isn’t faring much better than her boss. She has been tasked with leading the effort on voting rights and stemming the migration crisis on the southern border.

Neither of her missions have been accomplished, to put it mildly.

Even with those grim prospects, are we really to believe that the woman who lost to Barack Obama in the 2008 Democratic primary and Donald Trump in the 2016 presidential election – is the next great hope?

There is a reason Hillary Clinton lost not once, but twice on the big stage. In fact, there are several reasons.

The first one being that Bill Clinton’s wife comes with a lot of baggage. And I’m not even talking about her scandal-ridden husband.

The progressives on the left, who now have free rein of the party, don’t have the fondest feelings towards former President Obama’s Secretary of State. And can you blame them?

Brazile claimed she couldn’t write a press release without getting the Clinton campaign’s approval. 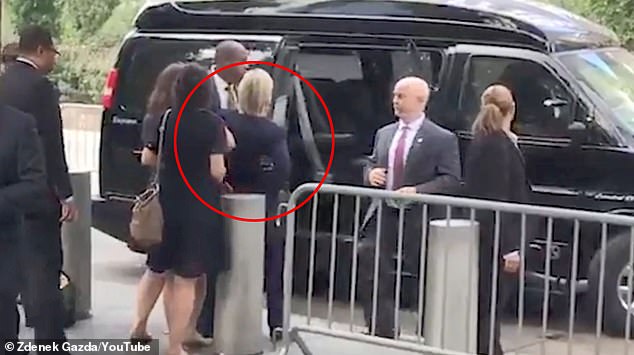 Hillary couldn’t prove she was the strongest candidate in 2016, because of serious questions regarding her health. (Above) In 2016, after a 9/11 ceremony in New York City, Clinton was captured on video collapsing into the arms of her Secret Service agents

‘If the fight had been fair, one campaign would not have control of the party before the voters had decided which one they wanted to lead,’ Brazile wrote. ‘This was not a criminal act, but as I saw it, it compromised the party’s integrity.’

The results left a lot of voters, especially the Bernie bros, infuriated.

Considering how the far-left movement has only grown stronger since Clinton screwed over the grumpy socialist from Vermont, what makes anyone think that she could win over the socialist faction of her party now?

Another reason — Hillary couldn’t prove she was the strongest candidate in 2016, because of serious questions regarding her health.

In 2016, after a 9/11 ceremony, Clinton collapsed and was carried into her car. She was later diagnosed with pneumonia.

At campaign stops, she would often have trouble finishing speeches without having to take long pauses due to constant coughing fits.

Many people were left wondering if she was healthy enough to handle the job. It is hard to imagine these concerns wouldn’t pose a problem 8 years later, especially as an increasing percentage of voters say aging-Biden is not up to the job.

Clinton would be 77-years-old if she entered the Oval Office.

Then there is Hillary’s likability problem.

In 2016, a majority of the country had an unfavorable opinion of Hillary Clinton. It didn’t matter that she had Jay-Z and Beyonce endorsing her or that Barack Obama said she was the most qualified presidential candidate ever.

It didn’t even help that she visited a Chipotle on the campaign trail and ordered a burrito bowl like real people do.

America’s unfavorable opinion of Hillary only got worse after the election. Nearly 2 years after she lost, her approval sank even further to 36%.

Sure, Trump had stunning unfavorables as well. However, Trump proved he could win on the national stage despite his unpopularity.

America has a love-hate relationship with Trump. Hillary only could manage half of the love-hate equation.

While some people think Orange Man can be blamed for all the world’s ills, other people would stand in line for hours to attend his rallies while wearing MAGA shirts and hats. 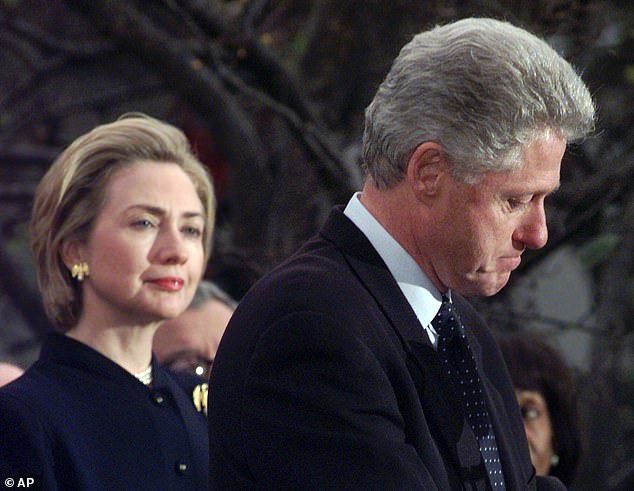 There are several reasons Hillary Clinton lost not once, but twice on the big stage. The first one being that Bill Clinton’s wife comes with a lot of baggage. (Above) Then-first lady Hillary Rodham Clinton watches then-President Clinton thank Democratic congressman who voted against impeachment during remarks at the White House on Dec. 19, 1998.

People either hated Hillary or they considered holding their nose for her. The enthusiasm wasn’t there.

Clinton also famously lost Rust Belt voters who previously went for Obama in 2008. She didn’t even campaign in Wisconsin during the general election.

Biden won many of those voters back, in Michigan, Pennsylvania and Wisconsin, and carried the presidency.

Do we have any reason to think Hillary would win those voters over in 2024? She has only become more progressive and tone deaf.

Not to mention – Hillary’s laundry-list of scandals: Whitewater, the private server, the Clinton Foundation, Benghazi, the Steele Dossier.

If Hillary runs, the GOP should ask Peter Schweizer of ‘Clinton Cash’ if he wants to be the creative director of their attack ads. The Clinton family’s corruption and influence peddling is as infamous as it is infuriating.

Even the Russia hoax fanatics over at CNN had to acknowledge Clinton’s involvement with the dirty dossier.

Nearly a year passed before the full truth came out about the financing out the Steele dossier.

The money had flowed from Hillary Clinton’s presidential campaign to law firm Perkins Coie, to the research company Fusion GPS, and then ultimately to Christopher Steele.

The full accounting of the Russia hoax is still pending which means there could be even more to this dirty tricks operation.

Lastly, when considering election outcomes, it is also important to factor in the mood of the country. 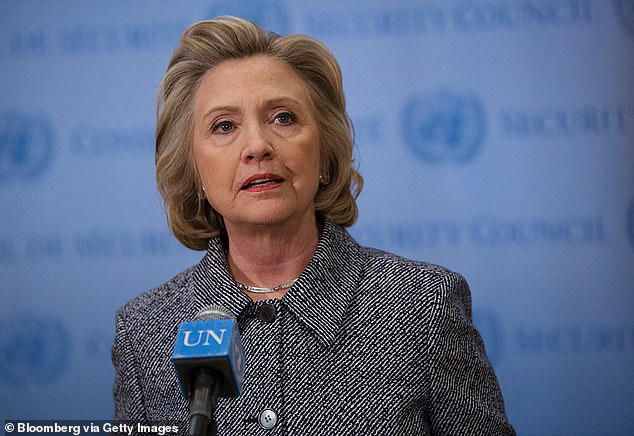 The Clinton family’s corruption and influence peddling is as infamous as it is infuriating. (Above) Clinton speaks during a news conference at the United Nations in New York, U.S., on Tuesday, March 10, 2015, and defended the legality of her use of a private e-mail account and server

In 2020, Americans were assured that Joe Biden was going to unite the country after the divisive years of Donald Trump. How is that working out for us?

After warning the unvaccinated that they have a winter of death and sickness to look forward to, the President recently compared people who are against federalizing elections to segregationists George Wallace and Bull Connor.

The Kumbaya moments we were promised are few and far between.

After buying Biden’s unity BS, are Americans now going to believe that the woman who called half of Donald Trump’s supporters ‘deplorable’ is going to bring the nation together?

Hillary has been on a cringeworthy journey to figure out why things didn’t go her way in 2016.

Her pursuit for answers has led to memoirs, documentaries, and even an embarrassing interview with Willie Geist in which Hillary, while choking back tears, read her 2016 would be victory speech.

All of these self-aggrandizing publicity stunts have only highlighted exactly why voters never liked her in the first place.

Hillary Clinton runs for the White House Part III? I wouldn’t even pay to stream that.

Listen to Grace’s show every weekday from 12-3 at GraceCurleyShow.com.

More than 50,000 protesters will march in Glasgow and other UK cities for climate change action