Thousands of British holidaymakers again faced chaos again at UK airports today as Heathrow ordered to cancel 10 per cent of their flights to cope with the baggage backlog – leaving 15,000 passengers stranded.

Passengers travel plans have been thrown into disarray at the eleventh hour following a week of flight cancellations as the ongoing staffing crisis continues to cause mayhem at Britain’s travel hubs.

90 flights are expected to be affected after airlines flying from Terminals 2 and 3 at Heathrow were asked to scale back flights.

Virgin Atlantic has cancelled at least three long-haul flights to destinations including New York and Los Angeles, while British Airways has been forced to make ‘a small number of cancellations’, the Independent reports.

Three flights BA had planned to Toulouse in France have been grounded alongside two of the four Marseille departures.

Meanwhile, EasyJet said it is ‘proactively consolidating a number of flights’ at airports affected by ‘operational issues’, such as London Gatwick and Amsterdam’s Schiphol.

The airline expects its capacity between April and June to be 87 per cent of 2019 levels – rising to 90 per cent during the following three months.

It stated there will be a ‘cost impact’ from disruption and the amount of money it spends to operate each seat per kilometre excluding fuel will ‘exceed’ previous guidance. 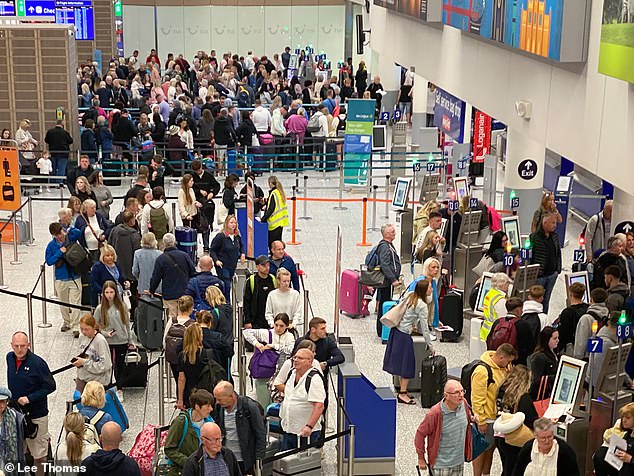 BRISTOL AIRPORT: Thousands of British holidaymakers again faced chaos again at UK airports today as Heathrow ordered to cancel 10 per cent of their flights to cope with the baggage backlog – leaving 15,000 passengers stranded 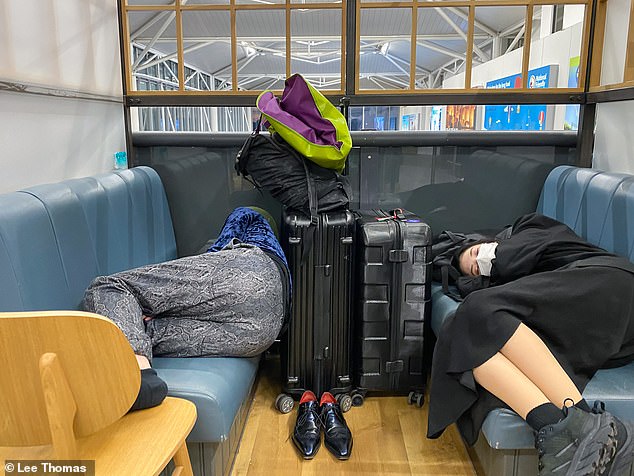 BRISTOL AIRPORT: EasyJet said it is ‘proactively consolidating a number of flights’ at airports affected by ‘operational issues’, such as London Gatwick and Amsterdam’s Schiphol 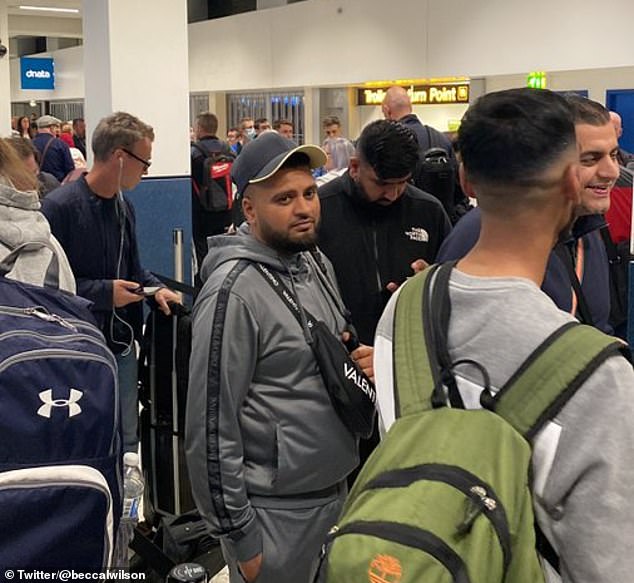 MANCHESTER AIRPORT:  Today holidaymakers are facing even more travel chaos – with exceptionally lengthy queues at Bristol, Manchester and Heathrow Airport at 4am this morning

It added: ‘We believe that these capacity/cost impacts are a one-off this summer as we would expect all parties to build greater resilience in time for 2023 peak periods.’

The reason for the ongoing chaos has been due to a aviation staffing crisis – recruiting for roles such as security staff, ground handlers and check-in staff which is seeing passengers advised to arrive much earlier than normal for their flights because they are facing long queues.

While many businesses in the aviation sector are struggling to rehire staff after many were let go during the pandemic due to a collapse in demand thanks to successive lockdowns, high levels of staff sickness for those who are still employed is also having an impact.

A Heathrow spokesperson told MailOnline: ‘We apologise unreservedly for the disruption passengers have faced over the course of this weekend.

‘The technical issues affecting baggage systems have led to us making the decision to request airlines operating in Terminals 2 and 3 to consolidate their schedules on Monday 20th June. This will enable us to minimise ongoing impact and we ask that all passengers check with their airlines for the latest information.’

Today holidaymakers are facing even more travel chaos – with exceptionally lengthy queues at Bristol, Manchester and Heathrow Airport at 4am this morning.

One ‘stressed out’ passenger who was queuing at Manchester took to Twitter and said: ‘I’ve been queuing for an hour and I’m not even at security… stress levels are through the roof!’

The aviation industry is suffering from staff shortages after letting thousands of people go during the coronavirus pandemic.

The chaotic scenes came after one pilot was spotted loading luggage on to a plane, helping ground crew to load up to the plane with baggage ahead of an Edelweiss flight from Edinburgh airport. 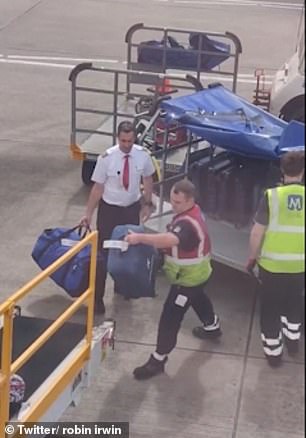 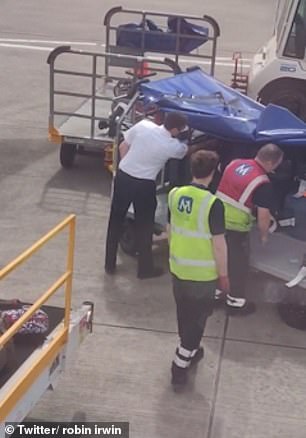 A diligent airline pilot has been spotted loading luggage on to a plane, as baggage chaos continues to hit airports across the UK. Video shows the conscientious captain down on the tarmac helping ground crew to load up to the cargo hold ahead of an Eldeweiss flight at Edinburgh airport 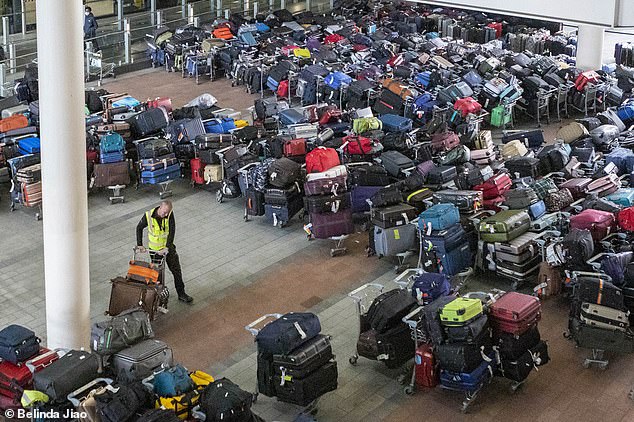 It comes as passengers continue to face chaos at UK airports, including at Heathrow, where hundreds of bags are mounting up outside Terminal 2

The issue started on Friday with Heathrow chiefs blaming a ‘technical glitch’ in the luggage system. But it has sparked a huge baggage backlog which has been described a ‘carpet of luggage’.

Meanwhile, hundreds of passengers have reportedly been waiting up to three hours to retrieve their baggage today after flying into Heathrow.

A spokesperson for the west London airport said that there is ‘ongoing disruption’ from Friday’s glitch. But they said no additional baggage was being delayed.

They also said the airport was doing its best to ensure all passengers flying today can take their luggage with them – and reiterated that baggage is the responsibility of airlines and not the airport itself.

Yesterday huge queues built up at Stansted airport and some passengers described the scenes of people sleeping in the airport overnight as looking ‘like a shootout’.

Labour shadow minister David Lammy was also caught up in the chaos yesterday morning – tweeting to his more than 780,000 followers to highlight the issue.

Taking a swipe at the Government, he wrote: ‘Another morning, another horrid queue at airport security! This time at Stanstead. Well done Boris Johnson. Top marks Priti Patel. Welcome to #BacklogBritain’.