Amid the hoo-haa of recent weeks we expected terse silence, a froideur chilly enough to make Parliament’s pipes freeze and its chandeliers tinkle.

Instead, the atmosphere between Boris Johnson and Sir Keir Starmer as they headed to the Lords to join the assorted claret gurglers, toffs, quangocrats and downright wrong ‘uns that make up the red benches was surprisingly convivial.

Dare I say it, matey even. For six months, the pair have been at each other’s gullets.

Beergate, Partygate, who ate and drank what, where, when and who with. And recently it’s threatened to get quite personal.

As the Prime Minister and the Leader of Her Majesty’s Opposition prepared to follow Black Rod across the main lobby for the State Opening of Parliament, some wondered if the Beefeaters might need to be summoned.

Yet they not only managed to exchange polite chit-chat, they even managed a smile. Not the full game show host flash of gnashers mind you.

No, Sir Keir’s was something altogether more forced, as though the sides of his face had been winched upwards. But a smile all the same. Couples’ therapists would call this ‘progress’. 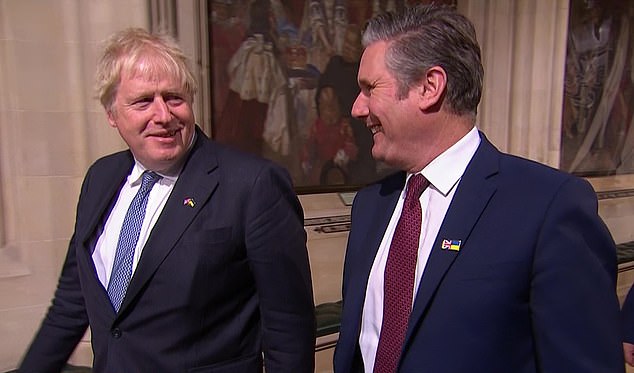 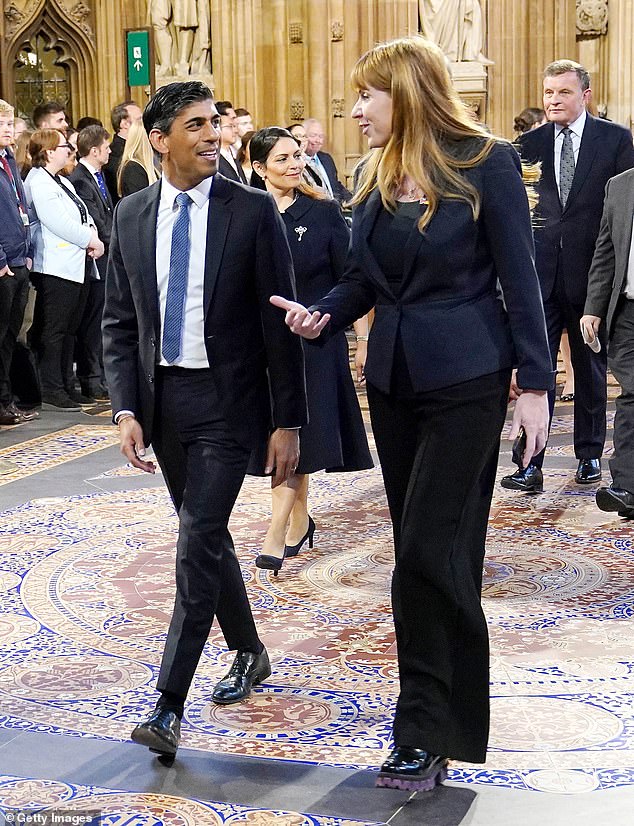 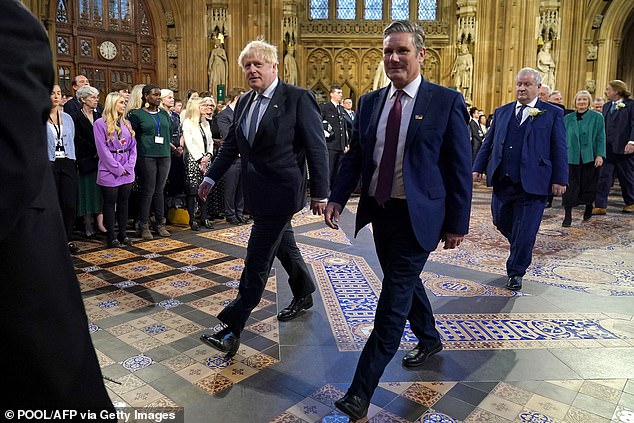 Naturally, Boris had attempted to defuse the tension with a gag. One Conservative MP claimed to have heard him ask Starmer: ‘How was your weekend?’

Judging by the wry, Quasimodo-like smirk that had spread across the PM’s chops, he might just as well have inquired: ‘Any career plans after you resign?’

After all the mud flinging of late, this was a much-needed break in hostilities. As the two of them chuckled quietly at each other, I half expected state trumpeters in the Royal Gallery to let out a light triumphal parp.

It didn’t last, of course. Three hours later, they were back in the Commons biting chunks out of one another again. The House was rammed. Standing room only.

Angela Rayner, meanwhile, had found time for a costume change. Labour’s deputy leader arrived at the Lords for the Queen’s speech all buttoned up in black.

For the bear pit in the lower chamber, she was sporting a bright red dress. Tres, tres glam.

The traditional humble address which followed provided much mockery for Sir Keir’s travails with Durham Constabulary.

Graham Stuart (Con, Beverley) observed pithily that ‘never in the history of human conflict has so much karma come from a korma’. 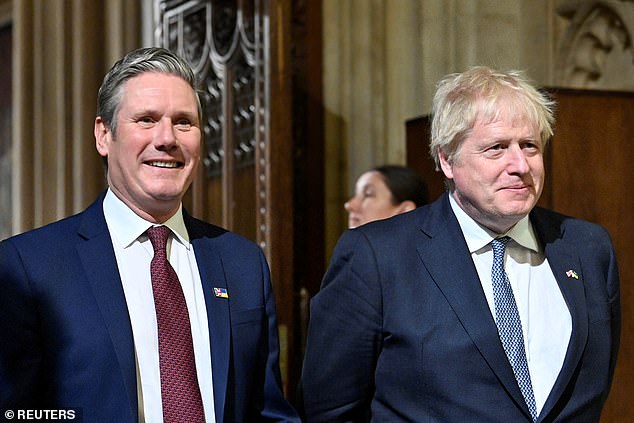 The Prime Minister and Labour leader not only managed to exchange polite chit-chat, they even managed a smile

He derided Starmer’s failure to make headway on the Red Wall in last week’s local elections, remarking that ‘the only thing opening up for him in the North, is a police investigation’.

Loud ‘ooohs’ reverberated around the chamber.

Next up was Fay Jones (Con, Brecon) who expressed delight that Sir Keir hadn’t cancelled his appearance.

Unlike his yellow-bellied no-show at the Institute for Government on Monday, she might have added but didn’t.

Starmer took the jibes graciously which was probably just as well. There was certainly little else about his performance to commend it.

Just the same old accusations we hear week in, week out flying across the dispatch box. The Government’s ‘time had passed’, he said. It was ‘bereft of purpose’ and ‘not up to the challenges’.

His delivery was devoid of any fire. Not that he ever exactly fizzes but he seemed particularly flat. Perhaps his recent tumble from the moral high ground had knocked the stuffing out of him.

Sir Keir soon lost his audience. Even Labour MPs began to talk amongst themselves, their laughter and chatter obscuring their leader’s drone. Partygate, incidentally, wasn’t even mentioned. Wonder why?

The longer Starmer spoke, the more the House fidgeted. It didn’t help that it was stiflingly hot in the chamber.

Eventually, Conservative MPs began making whirring gestures with their hands, urging him to wind things up. 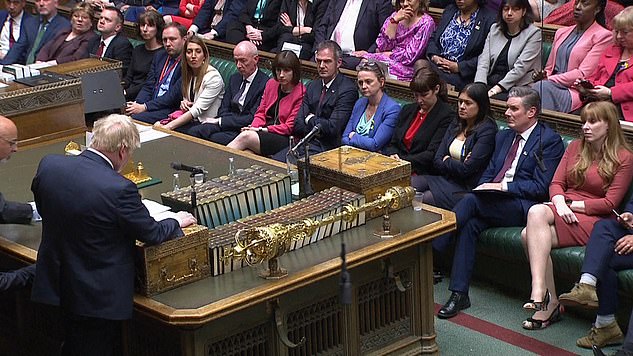 And when Sir Keir yelled ‘Enough is enough!’, MPs roared in agreement.

Boris was far from his best either, but at least he put some oomph into his delivery as he sprang to his feet.

The merest cheer from behind seemed to spur him on. Soon he was whipping his MPs into a mousseline of excitement.

He took a swipe at Labour over its energy policy, accusing them of being ‘great quivering jellies of indecision’ over its support for nuclear power. Loud cheers.

On three occasions he referred to Starmer as ‘the Leader of the Opposition of the moment’.

Each time he did so, Sir Keir pinched the bridge of his nose in affected agony.

He’s not as good as Boris is when his head is in the wringer. But then the PM has had considerably more experience.

Whyalla schoolgirl is bashed by another student in shocking video

Death of DHS official Philip Haney, a whistleblower on terrorism, is ruled a suicide