A Hermes driver has been sacked after being caught taking parcels out of his car and apparently dumping them in a Scottish woodland.

Amy Taylor, 34, photographed the driver removing parcels from his car boot and leaving them in a woodland area in Carnwath, South Lanarkshire, on Tuesday.

The mother claimed she asked the driver was he was doing, only to be told that he was ‘sorting parcels’.

But on her way home from walking her dog, Ms Taylor alleged she found the heap of parcels discarded on the ground – including a Hermes package addressed to her.

The nurse claimed she even received a notification saying her parcel had been delivered while she was still out walking her dog. 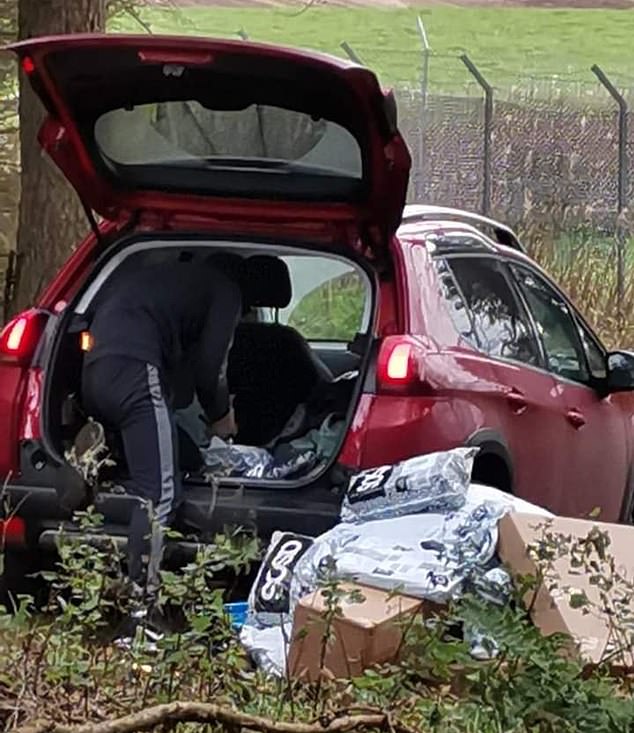 Amy Taylor, 34, photographed a Hermes driver (pictured) removing parcels from his car boot and leaving them in a woodland area in Carnwath, South Lanarkshire, on Tuesday 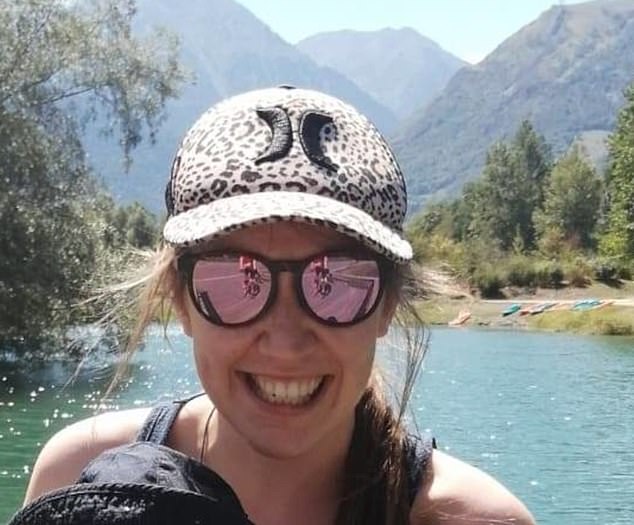 The mother (pictured) claimed she asked the driver was he was doing, only to be told that he was ‘sorting parcels’

A spokesperson for Hermes apologised to customers who had been affected by the driver’s actions and confirmed they had ‘terminated’ his contract.

Speaking about the incident, Ms Taylor claimed she contacted the police after finding the parcels, but said the packages had been removed by the time officers arrived.

She continued: ‘I was out on a walk with the dog when I spotted him dumping the parcels.

‘He was quite far into the woods but when I asked him he insisted he was “sorting the parcels”.

‘I carried on my way giving him the benefit of the doubt but I ended up turning and going back after thinking it over, but when I returned he was gone.

‘I was expecting a parcel from H&M anyway so decided to have a look.

‘Sure enough, there was my parcel – which I had already had an email for, saying that it had been delivered, along with a close-up photo of the parcel so you couldn’t see where it was.

‘I contacted the police but by the time we got up there with them, the parcels had all gone.

‘They did their best, but with no evidence, there wasn’t much the police could investigate unfortunately.’ 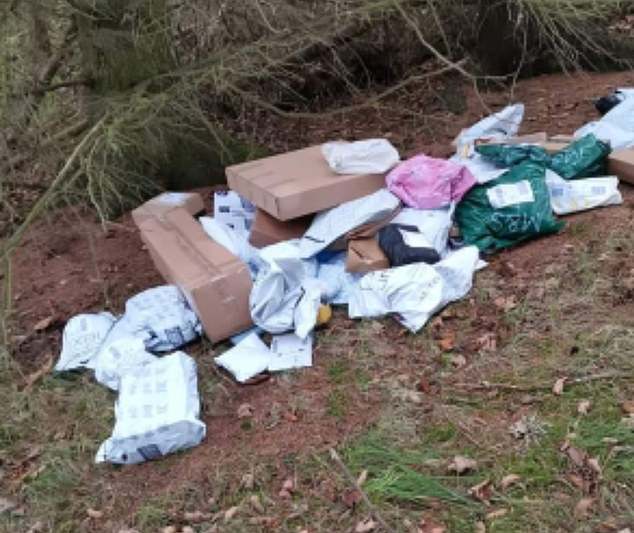 But on her way home from walking her dog, Ms Taylor alleged she found the heap of parcels discarded on the ground (pictured) – including a Hermes package addressed to her

Amy’s images were shared to Facebook by Ann Anderson on Tuesday with the caption: ‘These are the photos posted by Amy Taylor today of the Hermes delivery guy apparently marking parcels as delivered, then dumping them up at Kiamend.

‘He came back and picked them up because Amy spooked him. Has been reported to the police.’

One shocking photograph shows the driver leaning into the boot of his red car on a forest track, whilst a large pile of cardboard boxes and parcels lie beside him.

According to the picture, there are at least two large cardboard boxes on the ground along with two Asos packages lying atop a large white parcel.

A second photograph appears to show the pile of parcels strewn across the ground of the woodland beside a tree.

A spokeswoman for Hermes said: ‘We can confirm that this courier has had his contract with us terminated with immediate effect as a result of this incident.

‘We are continuing to investigate and apologise to anyone who has been inconvenienced by his actions.’

A Police Scotland spokesperson said: ‘On Tuesday, 23 November, 2021 officers received a report of parcels having been left in the woods near to Carnwath.

‘Officers attended and the items were no longer in the area.’

Unvaxxed sheriff's deputy, 31, who nearly died of COVID gets the shot the day he leaves hospital

Smart doorbells are ‘affluence cues’ that could INCREASE the chances of a break-in, experts warn