Hillary Clinton took a thinly veiled dig at Sens. Kyrsten Sinema and Joe Manchin on Friday, tweeting out a Martin Luther King quote that railed against ‘the white moderate’ who ends up blocking ‘the flow of social progress.’

As if there were any doubt at what she meant, she cheekily added: ‘This is a subtweet.’

After combining to first weaken and then stop Biden’s huge Build Back Better spending plans last year, the two centrist senators on Thursday restated their opposition to reforming the Senate’s filibuster rule.

That meant Biden and his party lieutenants would need 60 votes to steer through his package of voter protection measures – an impossible task given Republican opposition.

Clinton, a former Democratic presidential candidate, offered the words of King in response.

‘MLK Jr. said: “I had hoped that the white moderate would understand that law and order exist for the purpose of establishing justice, and that when they fail in this purpose they become the dangerously structured dams that block the flow of social progress,”‘ she tweeted.

‘This is a subtweet.’

Former presidential candidate Hillary Clinton took a pop at Sens. Kyrsten Sinema and Joe Manchin by sharing a Martin Luther King quote in which he railed against ‘white moderates’

‘This is a subtweet,’ she added, in case anyone missed the significance a day after two Democrats from the party’s more conservative wing derailed Biden’s voting rights push 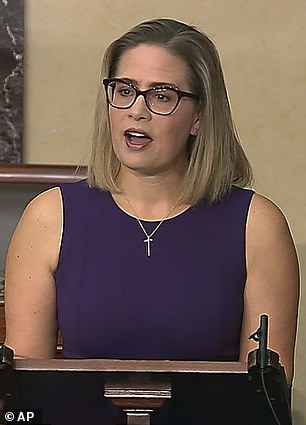 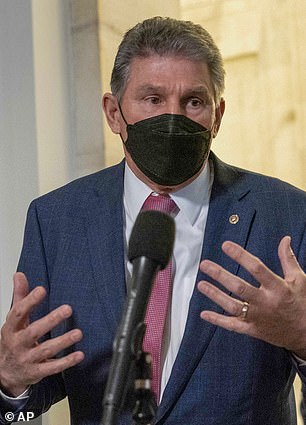 It followed one of the darkest days of the Biden presidency so far.

Having shelved his $1.8 trillion social spending plan, the president announced at the end of last year he was turning his attention to a voting rights push.

He summoned the legacy of King last week in a visit to his hometown of Atlanta, Georgia, as he announced he was backing the idea of changing Senate rules to push through legislation.

And he spent more of his political capital by visiting Capitol Hill on Thursday to press Democrats to join the push.

But even before he had a chance to make his case, Sinema dramatically announced she would not go along with the plans.

In a speech on the Senate floor, she said described changing the rules as ‘short sighted.’

‘We must address the disease itself, the disease of division, to protect our democracy,’ she said.

Sinema has made a virtue of promoting bipartisanship as the former progressive tries to ensure her popularity with the conservative Democrats and Republicans who make up her home state of Arizona.

Manchin, who faces a similar calculus in West Virginia, said later: ‘Ending the filibuster would be the easy way out. I cannot support such a perilous course for this nation.’

Both senators went to the White House Thursday evening for an extra hour of talks , which the White House later characterized as ‘a candid and respectful exchange of views.’

Biden sees implementing voter protections as essential to countering a wave of restrictions proposed by Republicans, spurred on by Donald Trump’s claims of fraud in the 2020 election.

So while Republicans praised the two senators, Democrats lined up to question their pursuit of bipartisanship.

‘It can’t be the only important thing,’ said Democratic Sen. Raphael Warnock, who is Georgia’s first Black senator.

‘The denial of women’s suffrage was bipartisan.’

Two new cases in Queensland as part of school cluster