Home owner leaves VERY aggressive sign on their wheelie bin warning dog owners to stay away – so is it fair enough?

A homeowner has put an aggressive sign on their bin to remind dog walkers to use public bins for waste and not their private wheelie bin.

A Reddit user spotted the crude sign while walking through Sydney’s inner-west and shared a picture of it online.

The blunt sign reads: ‘Will find out who you are throwing your dog sh*t in my rubbish.’ 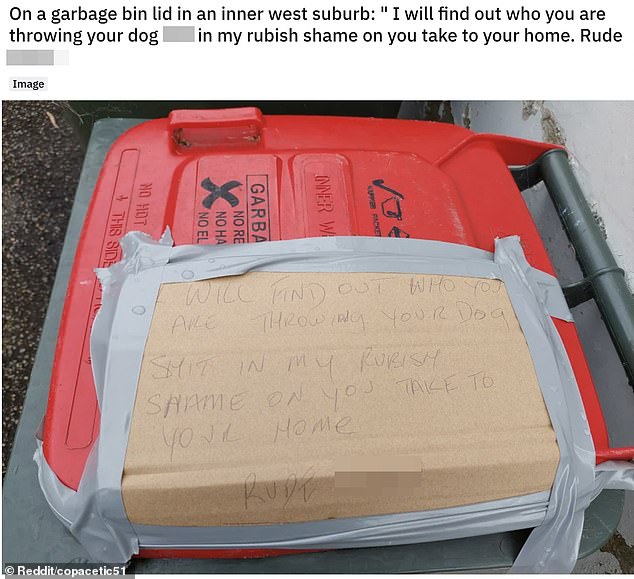 The note has sparked a debate online with some people believing putting waste in a private bin was better than leaving it on the footpath others said it wasn’t fair that the owner was left with a smelly bin.

‘I’d rather it in the bin than left on the footpath but I can understand some people get annoyed by this,’ one commenter wrote.

‘True, but it sucks to have to smell someone else’s dogsh*t when I am putting things in my bin. First world problems,’ another user replied.

‘Serious? It’s definitely rude. I have a dog and make sure to carry it to a public lined bin,’ another said.

One user pointed out that the recent heat would make the owner’s bin even more smelly and summer was an unfair time to bin share.

‘It’s Summer, and that shit festers in the heat. If you’re not a dog owner yourself, each time the lid is opened, the smell slaps you pretty hard across the face,’ they said.

NHS warning over drug ‘to give you Kardashian curves’

This is how it’s done, dad! Barron Trump, 15, joins Donald on the golf course in Palm Beach