The terrifying moment a house in Flint, Michigan exploded killing two people including a four-year-old girl was captured on home security footage.

Footage from a neighbor’s doorbell camera captured the moment of the explosion around 9:30 pm Monday night, showing a blinding fireball light up the night sky, accompanied by a deafening bang.

The blast sent a column of flames, smoke and electrical sparks shooting into the air. It was followed by people’s screams and the sound of car alarms going off.

Firefighters arrived at 3900 Hogarth Avenue to find three houses engulfed in flames with no word on injuries or what caused the explosion. Investigators from the Michigan State Police and Flint Fire Department are continuing to investigate the cause of the explosion.

Residents reported hearing a mother screaming and sobbing in search of her child. 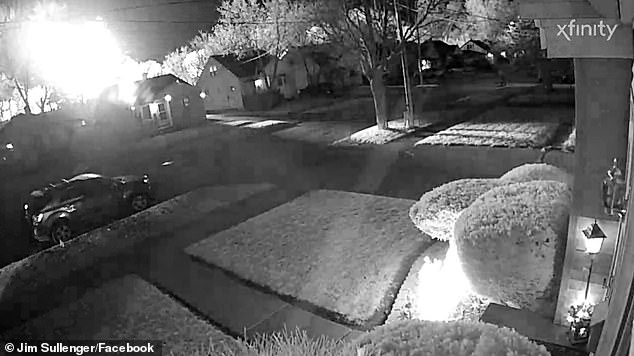 A doorbell camera in Flint, Michigan, caught the moment on when a nearby home exploded killing a four-year-old girl and her 70-year-old neighbor Monday night 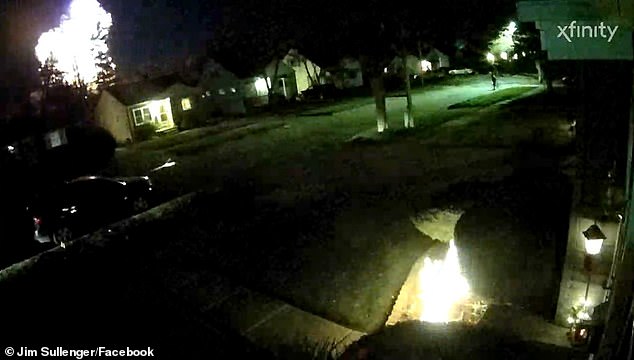 Video shows a fireball light up the night sky, sending flames, smoke and sparks flying into the air 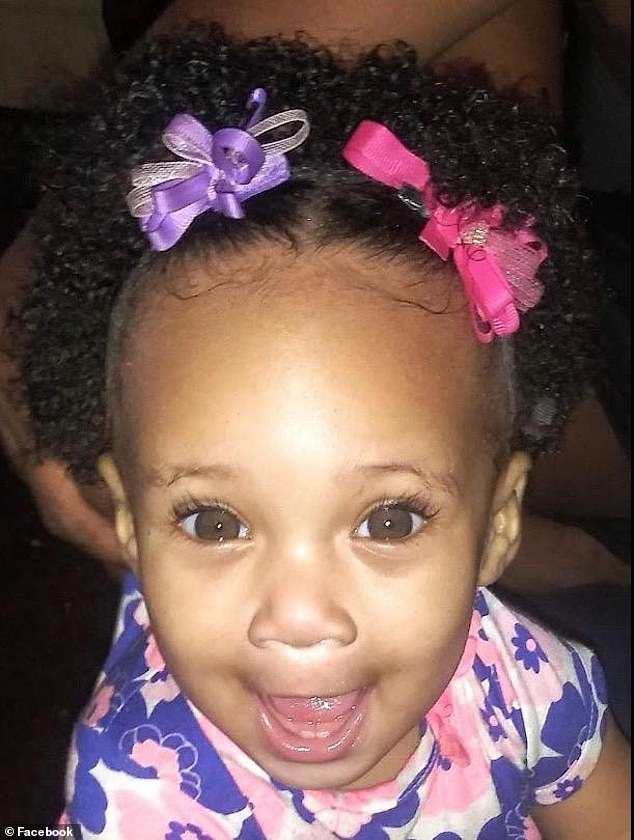 Four-year-old NuVeah Lucas was killed in the mysterious explosion, her body was recovered from the rubble by a search crew on Tuesday 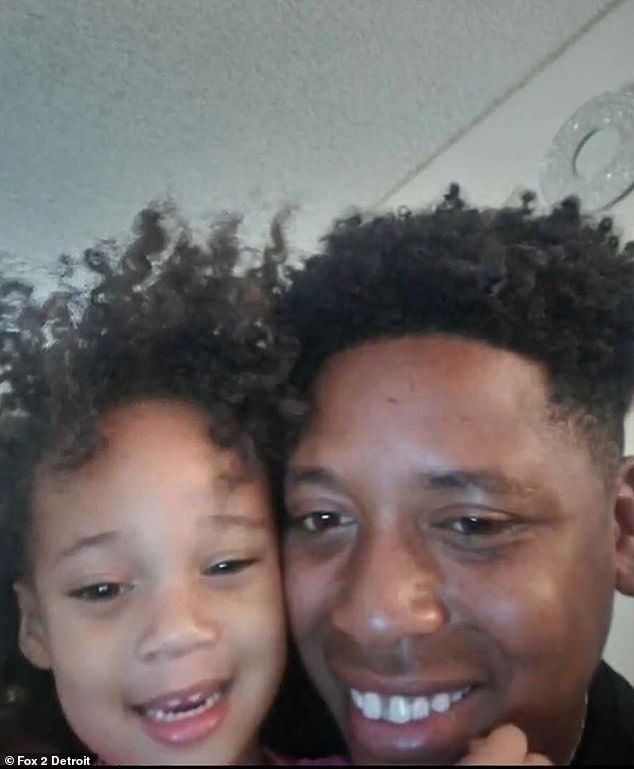 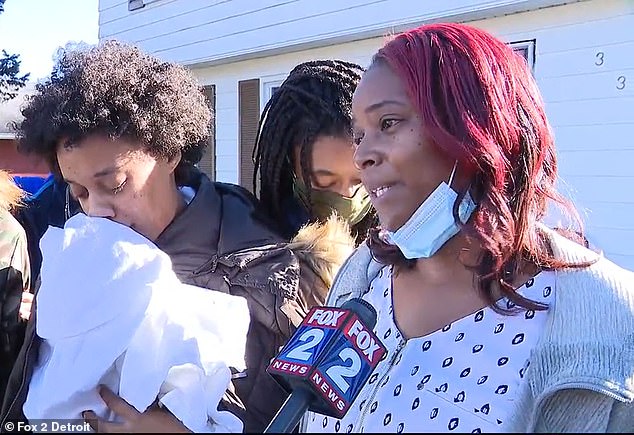 NuVeah’s mother, Alyshia, (left) clutched a blanket too upset to speak on Tuesday as her mother Athena Simerson told reporters how the NuVeah’s parents rushed to the back of the house where she was watching TV to find it completely demolished

The ages were corrected during a press conference on Tuesday, according to ABC 12.

Firefighters worked around the clock to guarantee no more bodies were trapped inside the burning homes. The young girl’s body was discovered in the rubble over 12 hours after her parents lost her in the explosion.

The intense explosion reportedly shook homes up to five miles away and damaged houses several blocks away with nearly 20 properties suffering damage, including the three residences that were demolished.

Twenty-seven residences in the neighborhood near the I-75 and Miller Road interchange were evacuated Tuesday after Consumers Energy and the city shut off utilities to the properties to conduct safety inspections, ABC 12 reported.

Flint Mayor Sheldon Neeley said all residents now are accounted for. ‘This is a tragic time for our community,’ the mayor said on Tuesday.

NuVeah’s pregnant mother, Alyshia, was hospitalized and since been released. Her father, David Brown, remains in the hospital on life support awaiting surgery to heal the burns covering 70% of his body.

Video shows Brown walking down the street shirtless and in a daze covered in burns.

‘I want my baby back,’ Alyshia wept.

Alyshia’s mother, Athena Simerson, explained that David shielded Alyshia during the explosion and that the couple tried to find their daughter when they came to but that the back section of the house where the child sat watching TV ‘was completely blown away.’

She shared that her pregnant daughter, who has two other children, lost ‘her house, car and all of her belongings,’ in the explosion. NuVeah is remembered by family members as an adorable and spunky young girl.

The post has not been updated since NuVeah’s body was recovered. 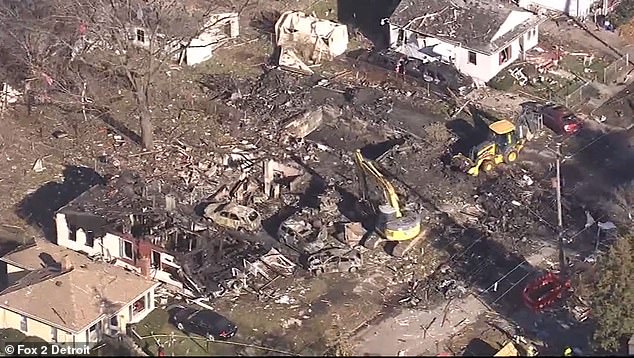 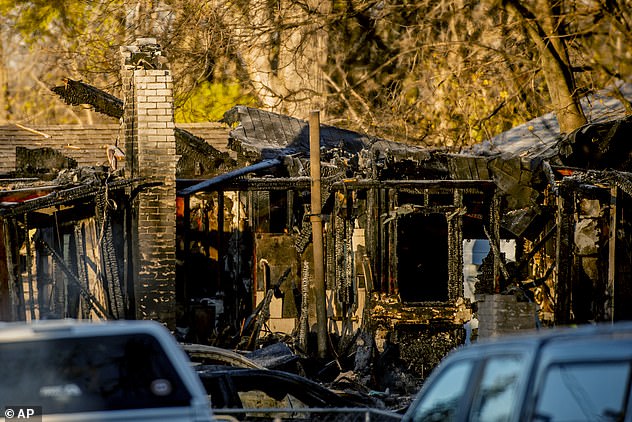 The shell of a home, seen on Tuesday morning, where an explosion and house fire occurred in Flint, Michigan, overnight, killing at least one person 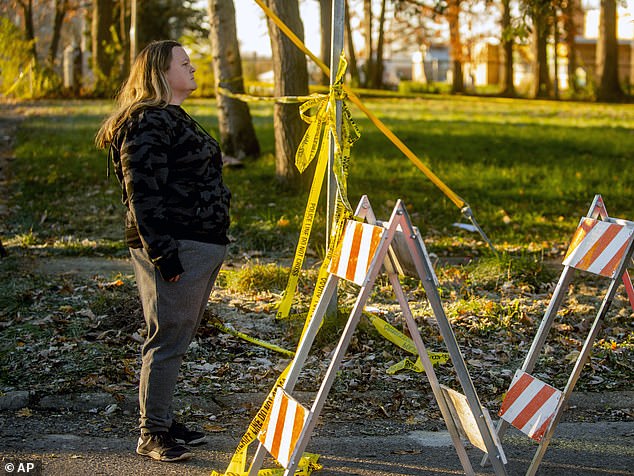 Flint resident Nicole Mills, who lives two houses down from the explosion, looks at the aftermath of the deadly house explosion 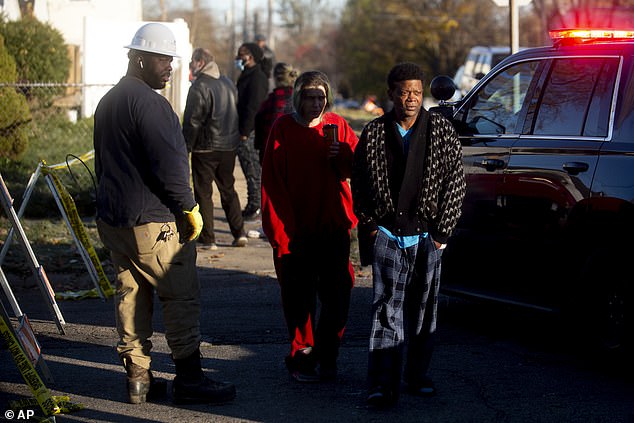 Neighbors and residents of Hogarth Avenue watch on as police, fire and other emergency personnel work at the scene Tuesday 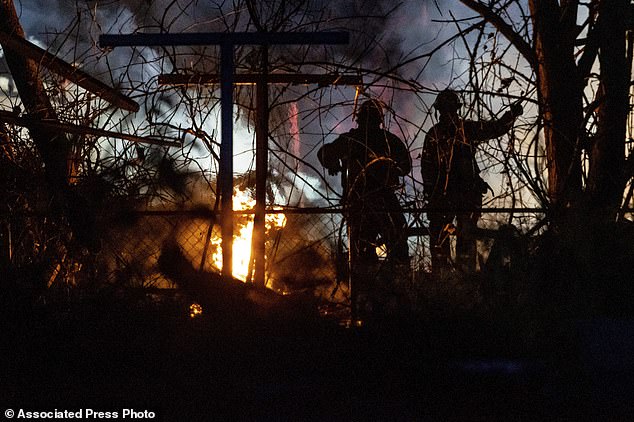 Homes sustained heavy damage from debris thrown across an entire block by the explosion, which was felt miles away 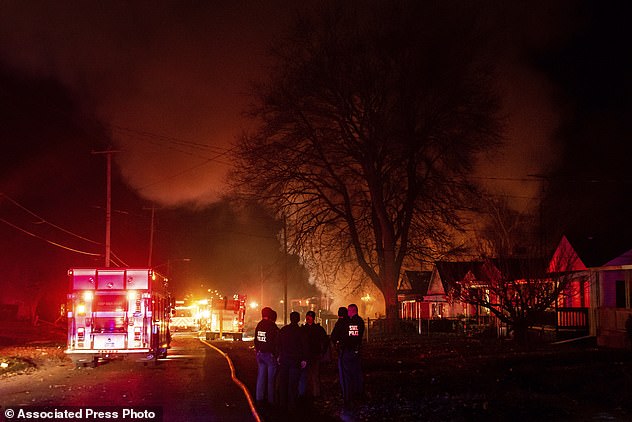 The house explosion and fire on Hogarth Avenue injured two adults and left a three-year-old girl missing. Emergency personnel are shown at the scene on Monday night

Simerson told Fox 2 that she identified NuVeah’s body and that no cause determined but it’s suspected to have been due to a gas leak.

However, Consumers Energy spokesman Brian Wheeler said Tuesday that the utility found no evidence of gas leaks or other issues with the gas system.

Residents said many believed a bomb had gone off, with people heard sobbing in the background of a live Facebook feed of the inferno.

‘When it went off, it was like a 2,000-pound bomb. You just feel so bad for them,’ a neighbor told Click On Detroit.

‘There was no way to get back into that house. There was absolutely no way and the woman who lost her daughter — she was actually in the one next to the one that blew up. It’s extremely tragic. It’s unbelievable. I have kids myself and I can’t imagine her loss and her pain and my heart goes out to her and her family,’ the neighbor said.

Aisha Lott, who lives nearby, felt the explosion: “It was like a really loud boom, and my house shook,’ she told USA TODAY.

The city partnered with various shelters and organizations, including Hand of God Ministries, the Metropolitan Transportation Authority, and United Way, to relocate the families living on the block into shelters until officials deem their homes safe.