Labeled by US officials as Osama bin Laden’s number-two, al-Zawahiri, 71, was a key plotter of the September 11 terrorist attacks and took over as the leader of the notorious terror group following bin Laden’s death in 2011.

The strike was carried out early Sunday at an Afghanistan safe house the elderly terrorist had be holed up in, at 6:18 am local time and 9:48 pm Saturday in the US.

The early morning attack saw al-Zawahiri killed by two hellfire missiles fired from drones deployed by the CIA, as he stood on the balcony of the safe house in downtown Kabul.

The Egyptian-born jihadist apparently proceeded to linger on the landing, as U.S. intelligence had noted he often did, allowing the drone ample time to execute the attack.

The mission, officials said, took six months to plan – but served as the culmination of a much wider, carefully coordinated campaign to track down and kill the al Qaeda head, who had successfully evaded US armed forces up until this point.

The slaying came more than 11 years after Bin Laden was killed in Pakistan by U.S. Navy Seals on May 2, 2011, in a more hands on, drone-less strike that came after a nearly decade-long hunt for the 9/11 mastermind. 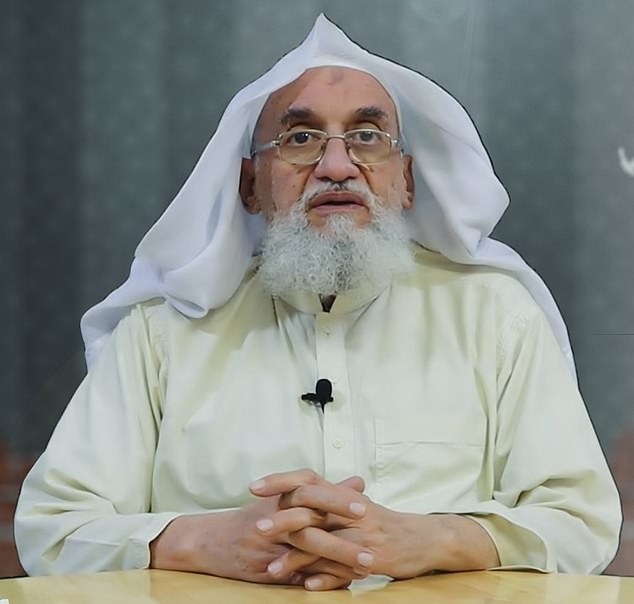 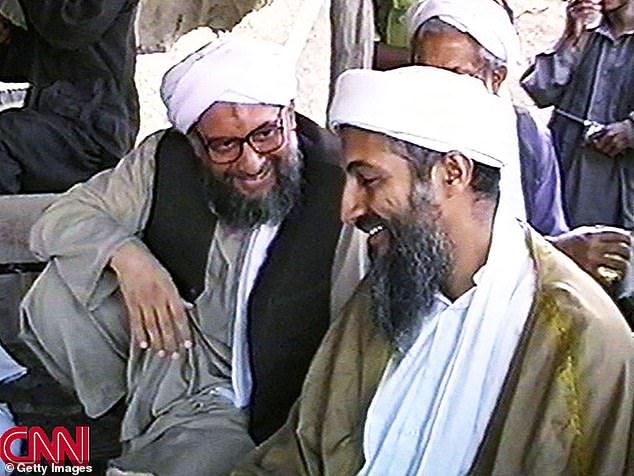 Labeled by US officials as Osama bin Laden’s number-two, al-Zawahiri, 71, was a key plotter of the September 11 terrorist attacks and took over as the leader of the notorious terror group following bin Laden’s death in 2011

An Egyptian born to a comfortable family in Cairo in 1951, al-Zawahiri first came on authorities’ radars in the 90s, shortly after the formation of the terror group in 1988 by Bin Laden – at which time al-Zawahiri was already a member.

The two terrorists reportedly met sometime in late 1980s, when al-Zawahri reportedly kept the Saudi millionaire safe in the caves of Afghanistan from Soviet bombardments that then had been common in the region.

In 1998, he was named Bin Laden’s deputy, further raising his profile, as he began to appear alongside the Saudi national at al-Qaeda held news conferences, airing anti-American sentiment and calling for other likeminded Muslims to join their cause.

That same year, al-Zawahiri, then 47, was indicted for his alleged role in the August 7, 1998, bombings of the United States Embassies in Tanzania and Kenya.

The August 7 attack saw nearly simultaneous bombs blew up in front of the embassies in Dar es Salaam and Nairobi, killing 224 – including 12 Americans – and wounding more than 4,500. 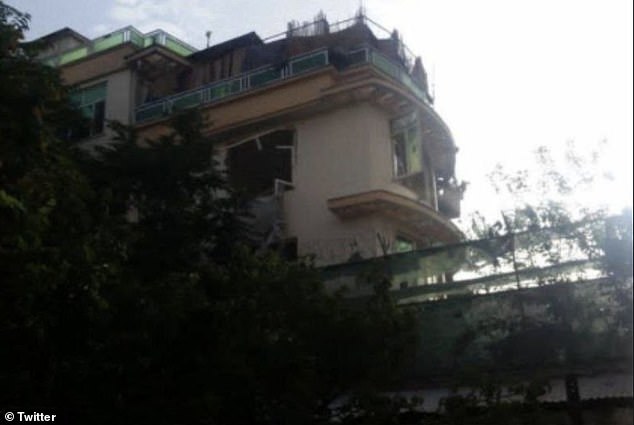 At the time, al-Zawahri – who was radicalized after he and hundreds of militants were tortured in Egyptian prison after Islamic fundamentalists’ assassination of President Anwar Sadat in 1981 – had bolstered the terror group by merging it with his own group, Egyptian Islamic Jihad, which he had started in the 80s.

He would then help hone the group secretly in his home nation, all while evading Egyptian intelligence, until it achieved cells of followers all across the globe.

After years of quietly assembling suicide attackers, funds and plans, al-Zawahri, Bin Laden and several others would carry out the infamous September 11 attacks, putting him and other conspirators at the top of the FBI’s Most Wanted List.

Going into hiding, al-Zawahri would then work to ensure that al-Qaeda members survived the global manhunt that would ensue – all while rebuilding the group’s shattered leadership in the Afghan-Pakistan border region, and serving as the supreme leader over branches in Iraq, Asia, Yemen, 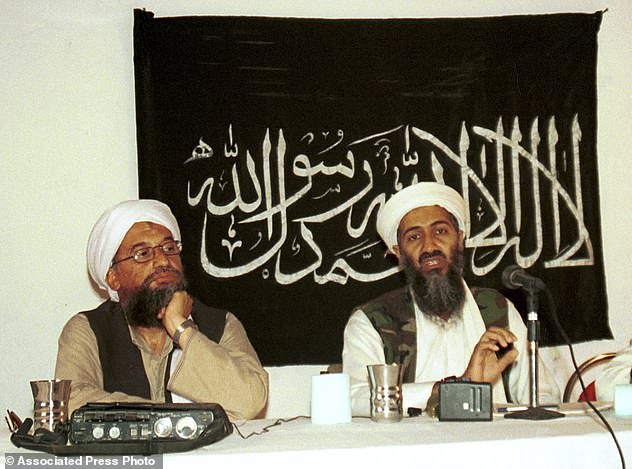 In the years that followed, al-Zawahri and Bin Laden would take credit for a series of attacks across Europ and Africa, as US forces successfully rounded up several accused of masterminding the 9/11 plot.

Despite efforts that included a combination of unrelenting raids and missile and drone strikes, both al-Zawahri bin Laden would successfully manage to evade US forces, and hide elsewhere in the Middle East.

It would take roughly a decade before US armed forces were able to track down at least one of the terror group’s elusive top members, with a group of US Navy seals successfully taking out Bin Laden, then 54, at a compound in Abbottabad, Pakistan.

It was at this point that al-Zawahiri assumed leadership of the group, taking over immediately after the death of his friend. 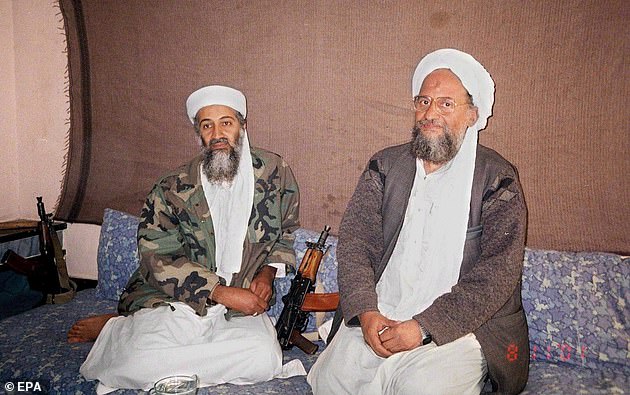 Al-Zawahiri was Bin Laden’s No 2 in Al-Qaeda, the radical jihadist network once led by the Saudi millionaire. The two are seen above in this September 2006 file photo

US intelligence would then learn over the course of several months from sources with ‘increased confidence’ that the terror leader’s family had relocated to an unspecified safe house somewhere in the Middle East.

The next clue to the al-Qaueda kingpin’s whereabouts would not come for another decade, after rumors swirled in 2020 that the terror boss had died from illness.

Those rumors were put to bed, however, the very next year, on the 20th anniversary of the September 11 attacks, when al-Zawahiri appeared in a video where he celebrated the US military’s withdrawal from Afghanistan 20 years after the invasion.

In that video, he proclaimed ‘Jerusalem will never be Judaized’ and praised al-Qaeda attacks – including one that targeted Russian troops in Syria in January 2021. 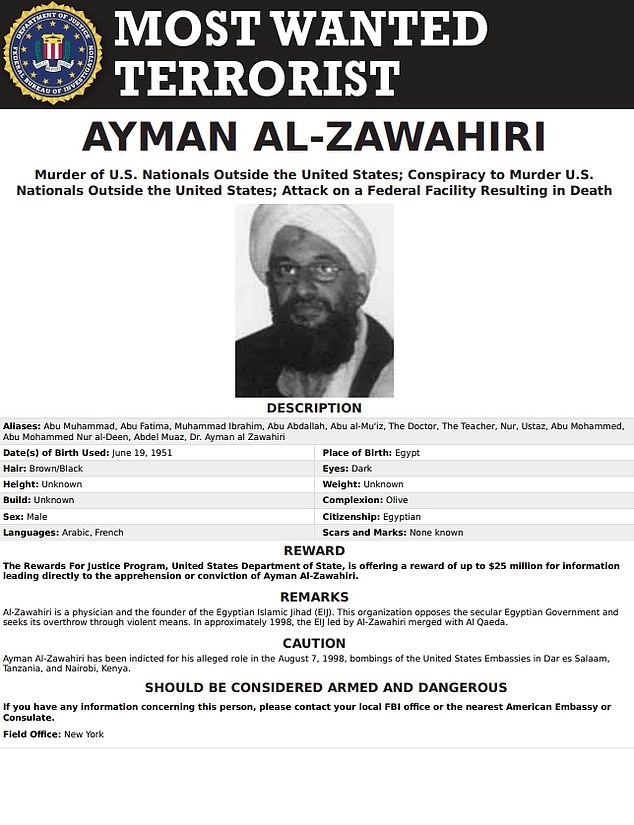 The sudden spot seemingly did not provide US officials any clues as to where al-Zawahiri was hiding – however, seven months later, top US security staffers were reportedly informed of ‘developing intelligence’ that he and his family were back in Afghanistan.

The breakthrough came in April, after US officials learned that the terror leader’s wife, daughter and children had relocated to Kabul, at an al-Qaeda safehouse – the one struck over the weekend.

Officials eventually determined that al-Zawahri, too, was at the house – setting into motion a plan that would see officials construct a scale model of the multifloored, terraced property. 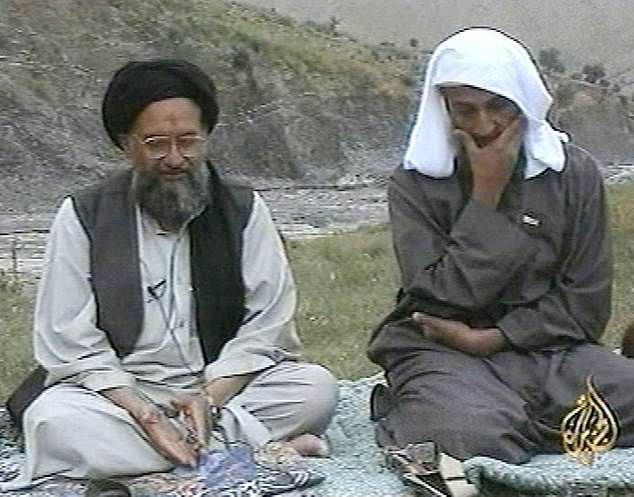 In this television image from Arab satellite station Al-Jazeera, Osama bin Laden, right, listens as his top deputy Ayman al-Zawahri speaks at an undisclosed location, in this image made from undated video tape broadcast by the station April 15, 2002

That model would eventually be brought it into the White House Situation Room to President Joe Biden, who along with several senior security officials, including National Security Advisor Jake Sullivan, would plot the attack, knowing that al-Zawahri was partial to sitting on the home’s balcony.

The group then painstakingly constructed ‘a pattern of life,’ as one official put it, for the terror leader, and said Monday that they had been confident he was on the balcony when the missiles flew.

Inside the administration, only a small group of officials at key agencies, as well as Vice President Kamala Harris, were allowed into the highly classified planning process.

During this time, as the US investigated the ‘construction and nature of of the safe house’ and building integrity so the strike could kill the target without putting civilians in danger, al-Zawahiri would continue to crank out videos attacking the US and its allies

Shortly after, US officials ‘systematically eliminated all reasonable options’ other than a strike, after confirming the identities of all the people inside.

‘Key’ agencies, officials said, were then brought into the process to make sure that intel was ‘rock solid’ before eventually carrying out the top-secret operation.

During the last few weeks of this period, Biden convened several meetings with advisors and cabinet members to scrutinize the intelligence and analyze various updates as to the situation at hand.

On July 1, Biden was briefed in the Situation Room about the operation, and closely examined the model of the home al-Zawahri was hiding out in. He gave his final approval for the operation on Thursday.

Just as US officials had planned, the jihadist had been standing on the balcony of his hideout when the early-morning strike was carried out.

‘We make it clear again tonight: That no matter how long it takes, no matter where you hide, if you are a threat to our people, the United States will find you and take you out,’ Biden said Monday, announcing the attack’s success to the nation.

Hours later, a statement from Afghanistan’s Taliban government confirmed the airstrike, but did not mention al-Zawahri or any other casualties.

It said it ‘“strongly condemns this attack and calls it a clear violation of international principles and the Doha Agreement,’ the 2020 U.S. pact with the Taliban that led to the withdrawal of American forces.

‘Such actions are a repetition of the failed experiences of the past 20 years and are against the interests of the United States of America, Afghanistan, and the region,’ the statement said. 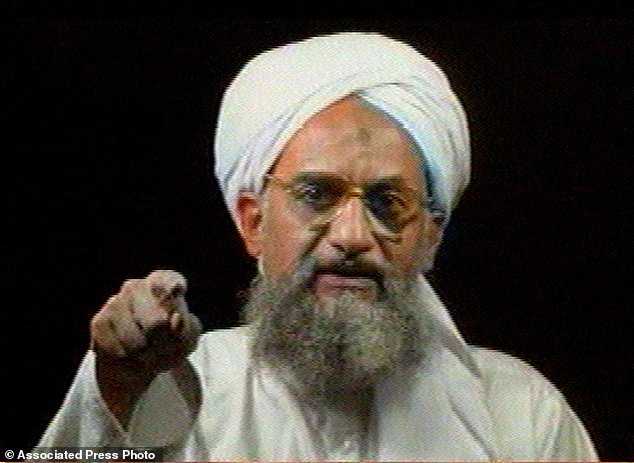 Afghanistan’s Taliban government confirmed the airstrike, but did not mention al-Zawahri, pictured here in 2006, or any other casualties

Who is Anthony Albanese? Voters weigh in on the Labor leader ahead of federal election