The British Press joined England fans across the country in expressing pride in the Three Lions as the football team suffered a devastating loss in the finals of the Euros last night.

Italy lifted the trophy after a nerve-shredding 120 minutes of play followed by an excruciating penalty shoot out which saw England miss three spot kicks in a row.

Front and back pages of the papers this morning reflected the nation’s agony with most opting to use a poignant picture of manager Gareth Southgate consoling 19-year-old Bukayo Saka who took the final kick that saw England take home a silver medal.

Some used heart-breaking photos of Marcus Rashford and Jadon Sancho, who also missed their spot kicks, being consoled by devastated teammates as the reality sank in.

Headlines referred to England’s ‘penalty curse’, a nod to the team’s dismal penalty shootout record in major tournaments, while also expressing pride for how far the young team have come.

The Daily Mail: It all ends in tears

How they reported it: The front page of the Mail showed manager Gareth Southgate cradling Bukayo Saka’s head as the 19-year-old reflected on his miss.

Describing the team as ‘Lionhearts to the last’, the paper points out the team lost on penalties – a trend which England fans have grown to know only to well.

The front page also features a pictured of teary-eyed fans reacting to the painful loss.

The back page of the Mail showed Southgate comforting Jadon Sancho who also missed his spot kick and uses the headline ‘The agony goes on’ referencing the fact England have not won a major tournament since the 1966 World Cup.

The paper uses an inset of Gareth Southgate being comforted England manager Terry Venebles after he missed his own penalty in the 1996 Euros shootout.

The Sun: Pride of Lions

How they reported it: The front page of the Sun also uses a picture of Southgate comforting Bukayo Saka.

The newspaper references the familiarity of England losing a major tournament via a penalty shootout but takes the optimistic tone of looking forward to next year’s World Cup.

The back page uses the headline Mamma Mia and shows Marcus Rashford doubled over in agony after missing his spot kick.

The Italian keeper and man of the tournament Gianluigi Donnarumma can be seen celebrating in the background.

The back page also features an inset of Southgate comforting Sancho.

The Daily Express: It hurts but we’re so proud of you

How they reported it: The Express used a picture of the England team consoling Sancho after he just missed his penalty.

Captain Harry Kane, who scored first for England in the shootout, looks on nervously next to an equally nervous Luke Shaw as Harry Maguire offers Sancho a hand.

The newspaper uses an inset of Saka in shock with his hand over his mouth after missing the final penalty.

The back page describes the loss as ‘so, so cruel’ and shows Rashford bent over in devastation after missing his penalty last night.

How they reported it: The Mirror showed Saka with his hand over his mouth having just missed his penalty.

He is being comforted by Kalvin Phillips as goal scorer Luke Shaw looks on in disbelief.

The newspaper says ‘brave’ England lost on pens but still did the nation proud after reaching the final of the championship.

The back page shows an agonised Rashford as he raises his hands to his head having just sent his penalty wide.

In a familiar theme, insets of Sancho and Saka are used as the paper reflects on how, despite the disappointment, the team have ‘united the nation’.

The Guardian: So close 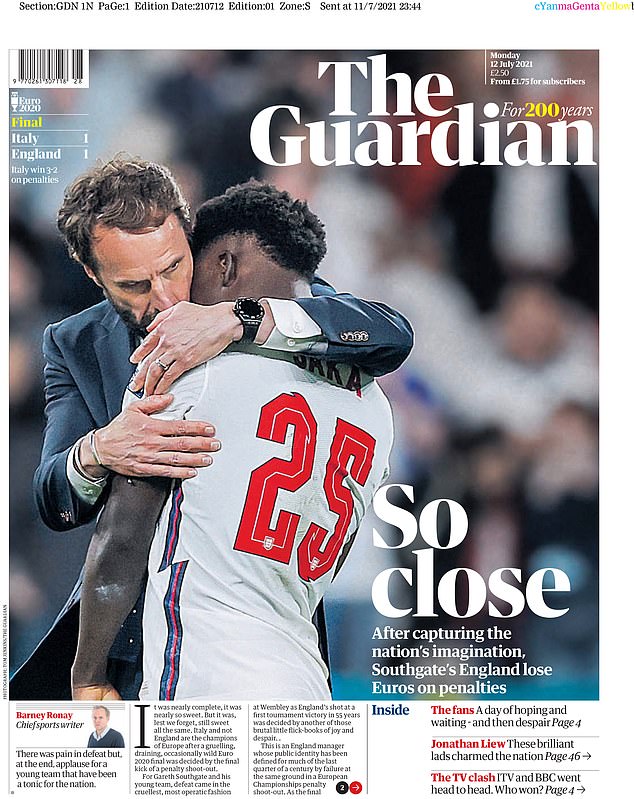 How they reported it: The Guardian dedicated almost its entire front page to the heart-breaking image of Gareth Southgate consoling young Saka after he missed his penalty.

The headline reflects on how England came so close to a heroic victory and captured the imaginations of the country.

The back page uses a large picture of dejected England players including Harry Maguire, who scored his penalty, and Rashford with his hands on his knees.

The headline reads ‘Heartbreak’ as it reflects on how the team fell at the final hurdle. 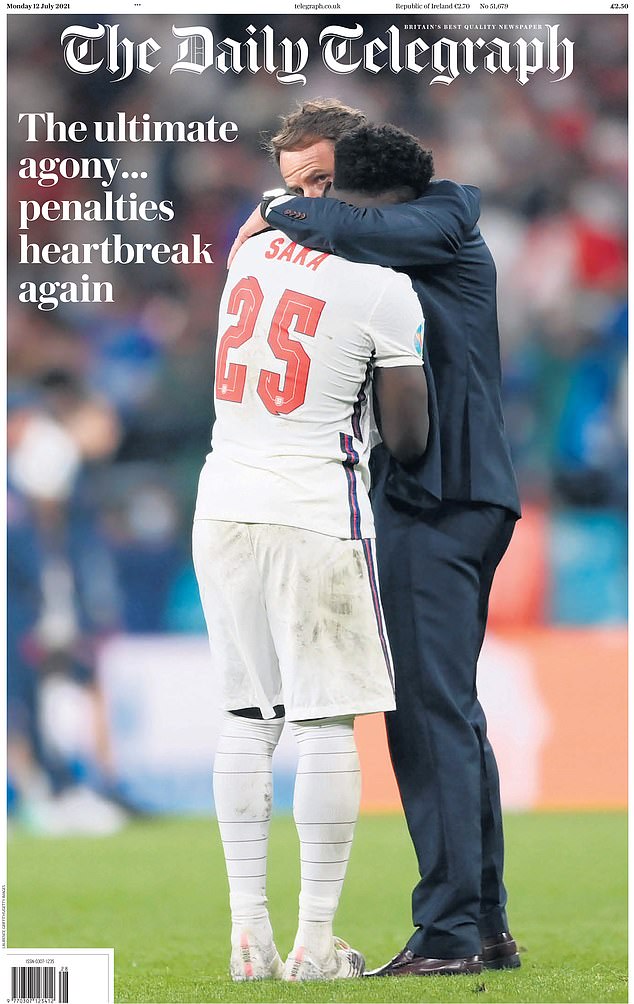 How they reported it: In a similar fashion to the Guardian, the Telegraph also takes up its entire front page with that emotional picture of Saka being comforted by Southgate, who missed his own penalty in a shootout at the Euros in 1996.

The headline reflects the familiarity of England losing on penalties, describing the method of defeat as ‘the ultimate agony’.

The back page features a Nike advert which shows a sketch in red and white of the England team with the headline ‘We didn’t come this far to just come this far’.

How they reported it: The Times uses the same picture of Saka being comforted by Southgate.

The headline refers to the ‘penalty curse’ which England fans have come to dread after experiencing several painful losses by way of a shootout.

The back page uses the headline ‘so cruel’ and shows a stunned England team comforting Saka as he wipes away his tears with his England shirt.

The Daily Star: Anyone for Conkers?

How they reported it: In a tongue-in-cheek approach, the Express asked readers if they fancied a game of conkers having suddenly ‘gone right off footie since last night’.

The newspaper has used a huge picture of a conker plastered over a shot of England fans and also suggested perhaps we could play tiddlywinks or bog snorkelling.

The back page is a little more reflective with the headline ‘Poison Pens’ and a picture of Rashford with his head in his hands.

The paper also uses insets of a distraught Sancho and a picture of Saka being comforted by teammates while Gareth Southgate is pictured looking dejected.

How they reported it: Using what will probably become England’s image of the tournament, the i uses the same photo of Saka being consoled by his manager after the team’s defeat.

The newspaper uses the entire front page for the image with the headline ‘heartbreak’ reflecting on the pain for both the team and the fans.

The back page is dedicated entirely to a picture of the Italians lifting the trophy and the subsequent celebrations.

Metro: Lions did us proud

How they reported it: The Metro opts for the popular image of Southgate and Saka and declares that the nation is proud of the team for reaching the final.

The back page uses the headline ‘the hurt goes on’, referencing the fact England have not won a major tournament since the 1966 World Cup.

It shows Saka with his hand over his mouth being comforted by Kalvin Phillips who has his arm round his team mate’s shoulder.

The newspaper uses an inset of Italy’s trophy celebration.

The Independent: Tears for Heroes

How they reported it: The Independent opted for a full page picture of Southgate hugging Saka after his penalty miss, dubbing the team heroes for their efforts.

The headline points to the familiarity of the team losing a penalty shootout in a major tournament.

The back page features a full size picture of a devastated Jadon Sancho who is crouched over on the floor while Maguire is stood stunned by the events.

The newspaper uses the singular word ‘Heartbreak’ as its headline.

SARAH VINE: I still believe the Tories are the right choice to lead Britain

Road markings encouraging cyclists to ride in between tram tracks

Vaccine mandate is scrapped in Queensland