Novak Djokovic is not quite out of the Australian Open just yet with another appeal against the decision to cancel his visa still to come, but the World No. 1 now looks long odds to make the grand slam tournament.

Expert in the specifics of how governments use their power in immigration law have suggested it’s match point for the Australian Immigration Minister Alex Hawke.

Even if Djokovic’s crack legal team wins its latest challenge against the second cancellation of his visa, the government still has several other legal plays it can make. 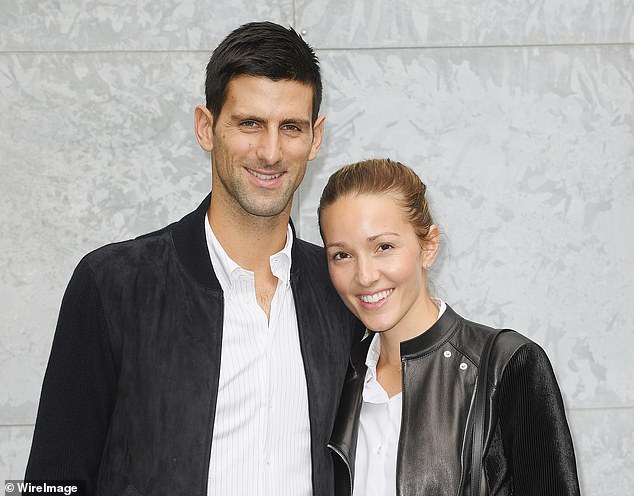 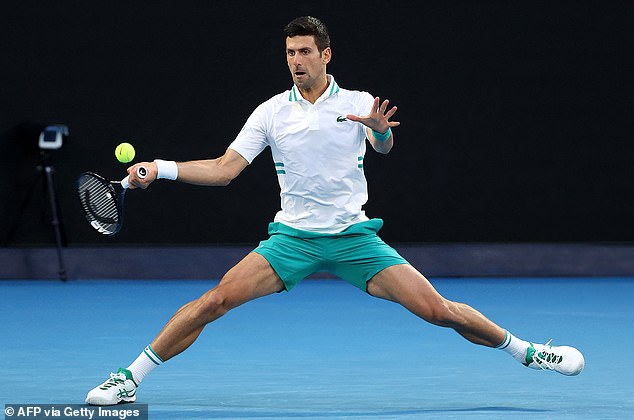 The tennis star’s lawyer Nick Wood SC told the Federal Circuit and Family Court his client’s visa was cancelled on grounds he could ‘excite anti-vax sentiment’ at the Australian Open on Monday.

Mr Wood argued the fears of government officials are unfounded and ‘patently irrational’.

But Judge Anthony Kelly responded by saying the issue of anti-vaxx sentiment will be ‘an important foundational aspect of this case’ given the wave of deaths and economic impact the Covid pandemic has had on Australian society.

The legal fight is likely to continue right up until Sunday – just one day before the Australian Open tournament is set to begin.

Novak Djokovic is yet to be detained on Friday evening

On Saturday at 8am he will be summoned for an interview with Border Force officers.

The 34-year-old will remain in detention for the rest of the day but will meet with his lawyers from 10am-2pm.

His legal team have promised a formal application for an injunction will be made by midday.

At 10am on Sunday Djokovic will also be taken to see his legal team under escort before a final ruling is likely to be made.

The Immigration Minister is on more solid ground with the second visa cancellation and even has the power to boot Djokovic for a third time using another section of the Migration Act, a leading immigration expert revealed.

‘Many paths to the same end in the Migration Act. The Minister gets many bites at the cherry,’ Dr Sangeetha Pillai, from University of NSW’s Kaldor Centre, in a detailed Twitter thread.

‘If Djokovic wins his challenge … Hawke could re-cancel again under [section] 109.’

‘All this makes me feel that Djokovic’s prospects of a successful challenge are probably quite slim.

‘Certainly his legal team are in a much tighter corner than they were on Monday.’

Mr Hawke used his discretionary powers to cancel Djokovic’s visa on Friday, four days after the federal government had backed down on sending the unvaccinated athlete home. 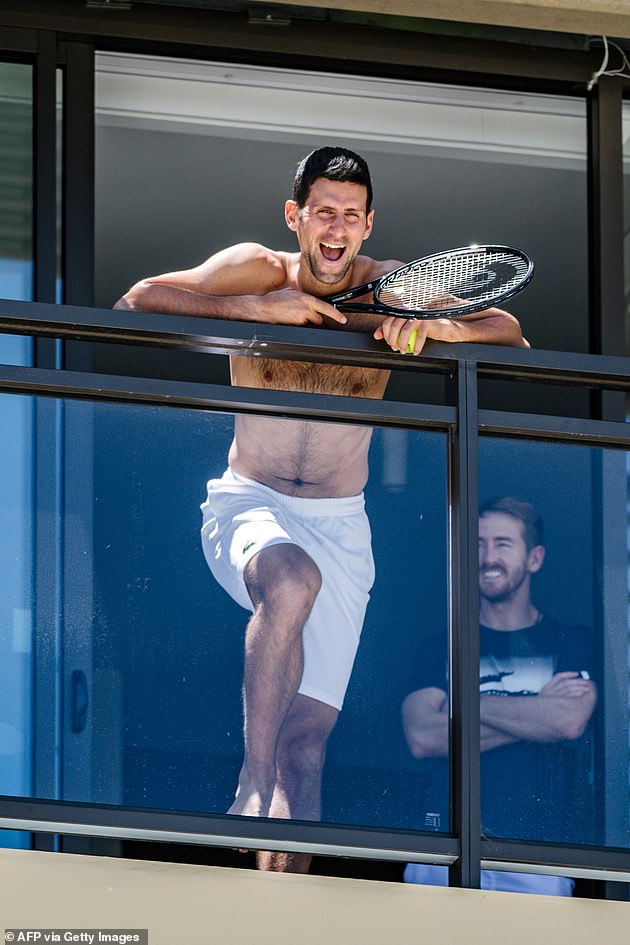 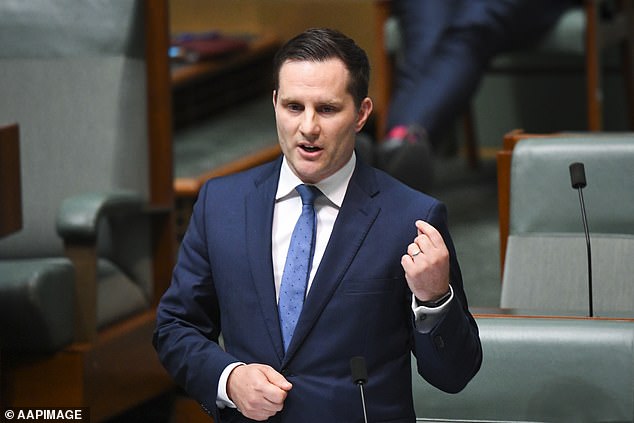 All this makes me feel that Djokovic’s prospects of a successful challenge are probably quite slim. Certainly his legal team are in a much tighter corner than they were on Monday. And even if they manage to wrangle a win, Hawke still has the option of re-cancelling under s 109.

Many paths to the same end in the Migration Act. The Minister gets many bites at the cherry!

So in order to be on solid ground with this re-cancellation, Hawke must be ‘satisfied’ that Djokovic ‘might be’ a risk to the health, safety or good order of the Australian community, and that cancellation is in the public interest.

In his shock statement Mr Hawke said: ‘Today I exercised my power under section 133C(3) of the Migration Act to cancel the visa held by Mr Novak Djokovic on health and good order grounds, on the basis that it was in the public interest to do so.

‘This decision followed orders by the Federal Circuit and Family Court on 10 January 2022, quashing a prior cancellation decision on procedural fairness grounds.

‘In making this decision, I carefully considered information provided to me by the Department of Home Affairs, the Australian Border Force and Mr Djokovic.’

Djokovic’s legal team are now seeking an injunction preventing his deportation with matter set to play out over the weekend before the start of the Monday’s tournament.

The case is being overseen by Judge Anthony Kelly, the same judge who overturned the initial cancellation of Djokovic’s visa.

The world’s best tennis player and 20-time grand slam winner was refused a visa on arrival at Melbourne’s Tullamarine Airport on January 6 by Australian Border Force officers citing section 116 of the Migration Act. 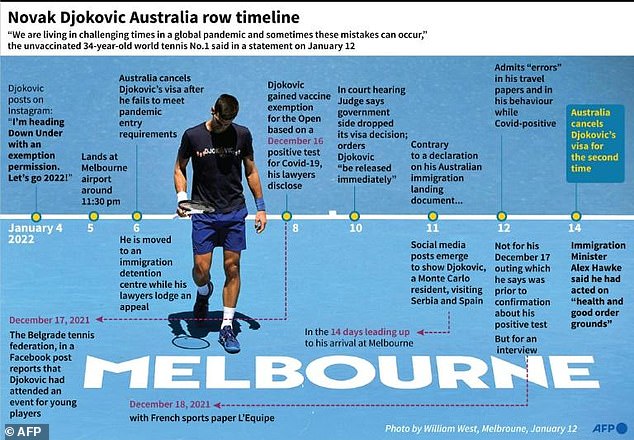 He was then controversially detained in a shabby immigration detention hotel in Melbourne.

But the visa decision was overturned in the Federal Circuit Court by Judge Kelly on January 10 because of a ‘fatal procedural error’, Dr Pillai said.

The ABF officer’s process was ‘legally unreasonable’ because he didn’t give Djokovic enough time to respond before cancelling his visa.

That doesn’t necessarily mean the grounds were wrong – just that the process used wasn’t watertight.

‘Basically this means that nothing that has happened so far suggests that Hawke can’t be satisfied that a s 116 cancellation ground applies to Djokovic,’ Dr Pillai said.

She said the argument Mr Hawke would cite in court to satisfy [section] 116 has a ‘low threshold’.

Mr Hawke would only have to be ‘satisfied’ that Djokovic ‘might be’ a risk to the health, safety or good order of the Australian community, and that cancellation is in the public interest. 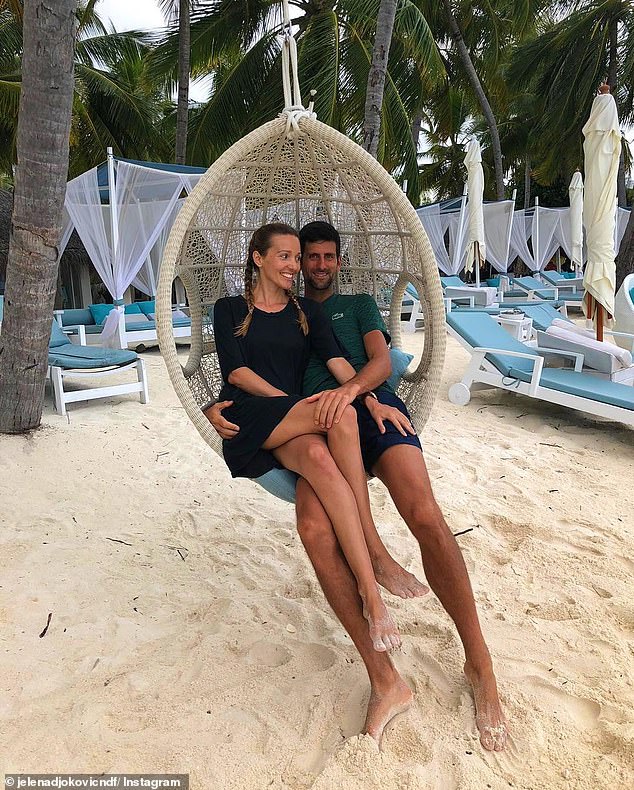 Even if Djokovic’s crack legal team wins its latest appeal against the second cancellation of his visa, the government still has several other legal plays it can make. Pictured: Djokovic and wife Jelena

Djokovic’s behaviour in attending public events in Serbia while Covid-positive – and maskless – and failing to mark down the countries he visited before Australia could also be used by the Minister’s team.

They could use it to reasonably argue that Djokovic might not be responsible if he did contract Covid again. 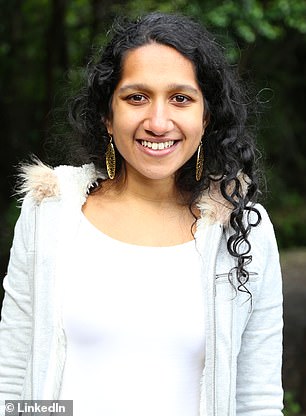 Or they could argue that the threat of violence in the stands at Djokovic’s matches constitutes a risk to ‘good order’.

The Minister’s team also under no legal obligation to provide notice about when they intended to cancel the visa – as the ABF officer was legally required to do.

But the door could be open to Djokovic returning sooner than 2025 – which is how long he could potentially be banned from holding an Australian visa.

‘[In the future] the Minister may choose to grant a visa if there are ‘compelling circumstances that affect the interests of Australia,’ Dr Pillai said.

‘If, after getting deported, Djokovic does want to return to play in the Open, his status as a top player may amount to ‘compelling circumstances’ that affect Australia’s interest.

‘His presence would bring in more crowds. But who knows, he may not want to come back.’ 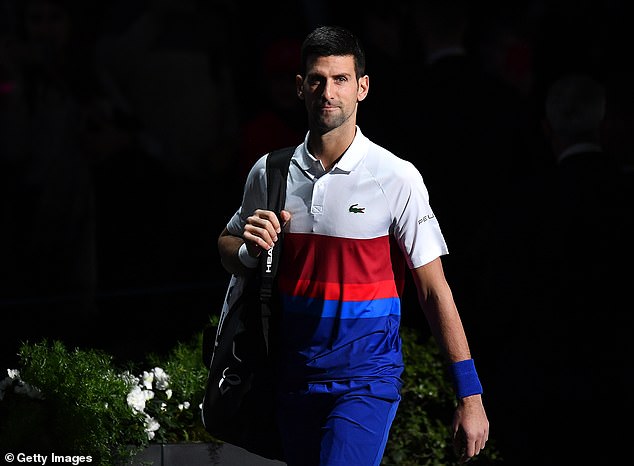 By Karen Sweeney in Melbourne for Australian Associated Press

Tennis world No.1 Novak Djokovic is still focused on defending his Australian Open title and winning a record-breaking 21st men’s grand slam tournament but the road to Melbourne has been bumpy and the path is not yet clear.

October/November – Djokovic applies for a temporary visa to enter Australia and compete in the 2022 Australian Open.

December 16 – Djokovic is ‘tested and diagnosed’ with COVID-19. Documents show he was tested at 1.05pm and the result was returned at 8.19pm.

December 17 – Attends events in Belgrade, including a trophy presentation for junior tennis players. Pictured not wearing a mask and posing side-by-side indoors with a large group of children.

December 18 – Djokovic says he learned of the positive test and cancelled several scheduled events. Goes ahead with an interview and photoshoot with French newspaper L’Equipe, saying he felt ‘obliged’ because ‘I didn’t want to let the journalist down’.

December 25 – Filmed by a fan playing tennis on a street in Belgrade. He is also photographed alongside Serbian handball player Petar Djordjic.

December 30 – Tennis Australia notify Djokovic he has been granted a temporary medical exemption, allowing him to play in the Australian Open despite not being vaccinated against COVID-19. The exemption was granted on the basis of a previous infection, based on the opinion of one panel of medical experts and reviewed by another.

December 31 – Filmed training at a tennis academy in Sotogrande, Spain. The academy post photos on its Instagram of him posing for pictures with fans a day later.

January 1 – Authorises his agent to complete his Australian Travel Declaration. The document says Djokovic had not travelled in the 14 days prior to his intended arrival in Australia. Later admits the form contained an error in not acknowledging his travel between Serbia and Spain. Djokovic said his agent was notified by the Department of Home Affairs that the declaration had been assessed and he met the requirements for a quarantine-free arrival.

January 2 – Granted a border travel permit by the Victorian government.

January 4 – Announces on Instagram he is ‘heading Down Under with an exemption’. The post was made shortly before he departed for Melbourne, via Dubai. News of his impending arrival sparks controversy in Australia.

January 6 – Australian Border Force officials detain Djokovic. After a series of early morning interviews his visa is cancelled at 7.29am. His lawyers are granted a temporary injunction by the Federal Circuit Court. Djokovic is taken to the Park Hotel, which is being used as an immigration detention centre.

January 10 – After a lengthy hearing, a judge quashes the government’s decision to cancel Djokovic’s visa after lawyers concede the decision was unreasonable in the circumstances. Judge Anthony Kelly rules Djokovic be paid his costs and freed from immigration detention. Government lawyers note Immigration Minister Alex Hawke still has a personal power to revoke Djokovic’s visa.

January 11 – Djokovic posts a photo of himself training at Rod Laver Arena. ‘Despite all that has happened in the past week, I want to stay and to try to compete at the Australian Open,’ he says. Questions are raised over his Australian Travel Declaration after documents released by the court revealed he answered ‘no’ to the question about travel in the 14 days before his arrival.

January 12 – Posts a statement on Instagram to correct ‘continuing misinformation’. He admits knowingly going through with the L’Equipe interview while positive for Covid-19. He also apologises for the ‘administrative mistake’ on the travel declaration. Mr Hawke’s office say he is still considering whether to exercise his power to revoke Djokovic’s visa.

January 13 – The draw for the Australian Open is delayed pending news of Djokovic’s visa. When the draw eventually happens at 4.15, he is drawn against fellow Serb Miomir Kecmanovic

January 14 – Djokovic’s visa is cancelled for a second time, with Immigration Minister Alex Hawke declaring the decision was made in the ‘interests of public safety’