A Jack the Ripper running tour in London has been slammed by critics who have branded it ‘tasteless’ and ‘disgusting’.

Secret London Runs sees participants visit the murder sites of one of the UK’s most notorious killers and trace his footsteps during a 10k jog through the back-alleys of east London.

However organisers of the £24.60 tour have now been met with a wave of criticism by critics in the wake of the murders of Sarah Everard and Sabina Nessa.

On their website the tour’s organisers write: ‘On this 10k running tour, as we jog through the back-alleys of East London, you’ll be transported back to Victorian London at the time of the Whitechapel Murders. 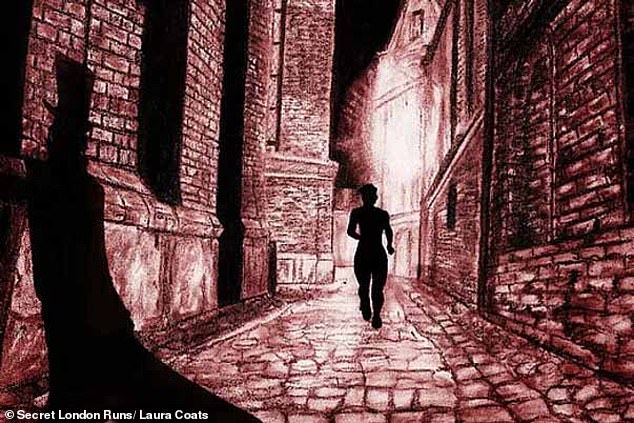 Secret London Runs, which charges runners £24.60 each, claims to transport participants ‘back to Victorian London at the time of the Whitechapel Murders’

‘Our tour begins by running you through the tragic events of 1888 and the surrounding social history: the victims, the police, the press and the conditions for East Londoners.

‘But we’ll also have time to explore a number of theories of that age-old question – Who Was Jack the Ripper?’

An image on the company’s website shows a person running through a cobbled street as a dark figure approaches them.

After learning of the tour, historian and author Hallie Rubenhold, wrote: ‘Just when you thought they’d used up all the possible tasteless ideas…’

‘Sure, let’s trivialize the horrific deaths of those poor women for a novelty night out. The bad taste boggles the mind.’

Another person commented: ‘Maybe they’ll be playing the Benny Hill theme as well, to turn the tasteless up to 11.

The firm’s founder Vanessa Cain-Tait, told The Telegraph: ‘Our guides know this is an inflammatory subject and we are very mindful that women died.

‘We make sure we talk about his victims as people and look at what their lives were like as well as what happened to them.’