The application that won former John Barilaro a plum trade posting in New York was littered with typos and other basic errors, newly released documents show.

The former NSW deputy premier stood down from the $500,000 a year posting last month following a severe backlash over his controversial appointment.

A parliamentary inquiry is now underway to determine why Mr Barilaro was handed the cushy job ahead of another top public servant, Jenny West – who was allegedly offered the role before the selection panel changed their decision. 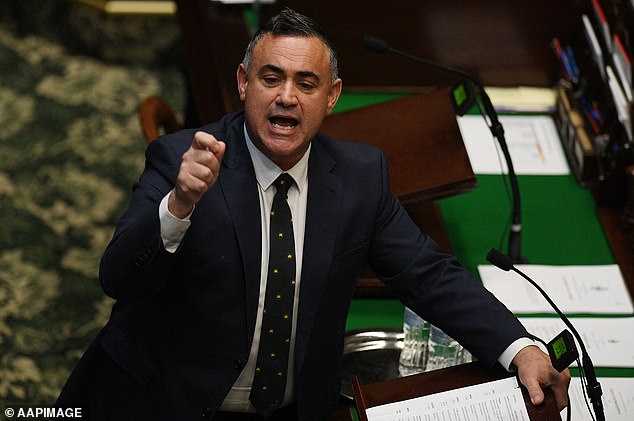 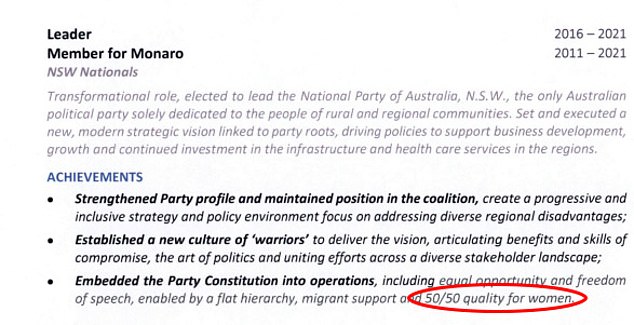 In the first sentence of his application, Mr Barilaro wrongly inserts an apostrophe to spell ‘Americas’, while his invitation to ‘chat further in how’ he is the best candidate for the role would better read ‘chat further about how’.

He later misspells net zero emissions by using a double t for net and boasts about achieving ’50/50 quality’ (equality) for women.

Another achievement he lists is in getting ‘complimentary’, which means flattering or given free of charge, rather than complementary (adding to or enhancing) funding for projects.

There are numerous ungrammatical sentences such as ‘utilising my rare diplomacy skills open doors’ and misplaced capitals for words such as ‘states’.

In the work history section he lists himself as deputy premier ‘until present’, which was not the case when he sent the application.

The mistake-ridden application adds another level of embarrassment to the deepening scandal engulfing Mr Barilaro and the state Liberal Party. 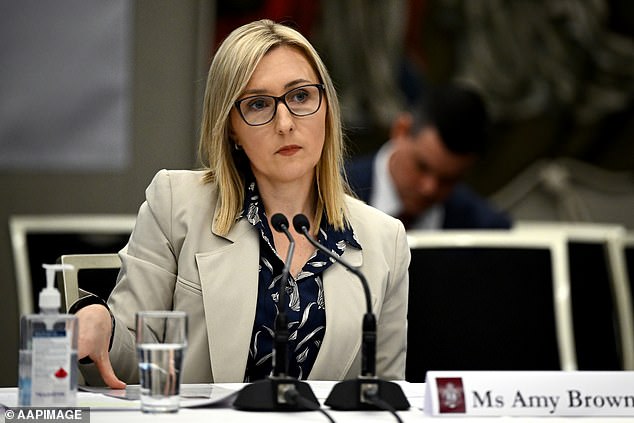 The application that won former John Barilaro a plum trade posting in New York was littered with typos and other basic errors, newly released documents show

Stuart Ayres was forced to deny allegations that as trade minister he had a hand in appointing Mr Barilaro as the Senior Trade and Investment Commissioner to the Americas.

The Minister for Western Sydney claimed the only person who had the power to make the trade appointment was the CEO of Investment NSW Amy Brown.

Mr Ayres added in a press conference on Monday he had only texted a copy of the job advertisement to Mr Barilaro after it had already been placed on the Australian Financial Review.

But an email from Ms Brown to a colleague, revealed Minster Ayres had reviewed and added a name to the short-list for the New York posting.

‘Min Ayres and I have run through the ‘long’ shortlist and our recommended ‘short’ shortlist for NYC,’ the email read.

‘He’d like to add (redacted name) to the short shortlist please.’ 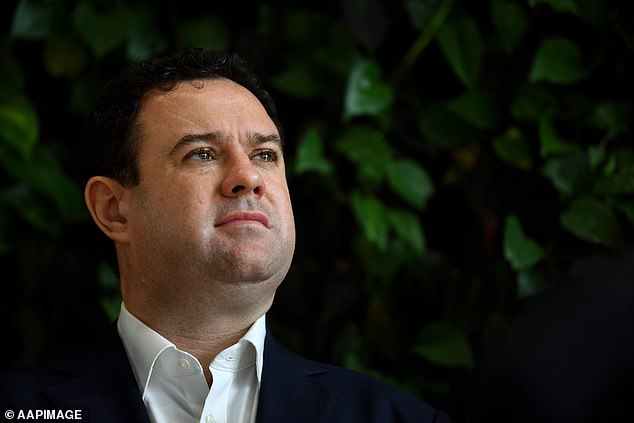 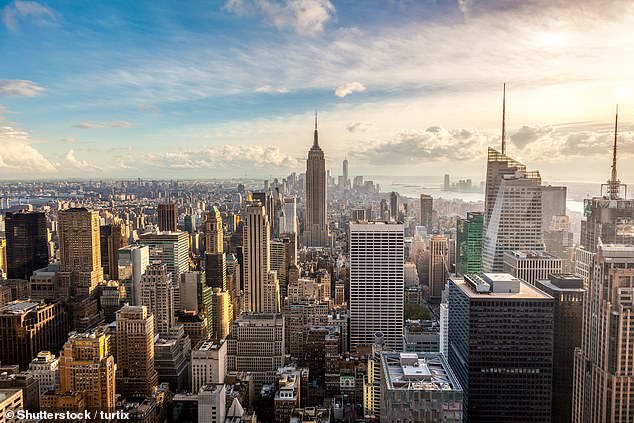 Mr Ayres has so far maintained hiring procedures were conducted at ‘arm’s length’ from the government.

‘The selections of our Senior Trade and Investment Commissioners (STICs) appointed in India, Japan, Singapore and China, were conducted in accordance with the GSEA,’ Mr Ayres wrote on Facebook.

‘It was an independent, transparent and meritorious selection process and the same process was used for the STIC – Americas role.

‘Not liking Mr Barilaro or his style of politics is not a suitable reason to reject his application, let alone not select him for the role.’

He admitted to having ‘discussions’ with Investment NSW CEO Amy Brown but never influenced her decision making on who should be selected. 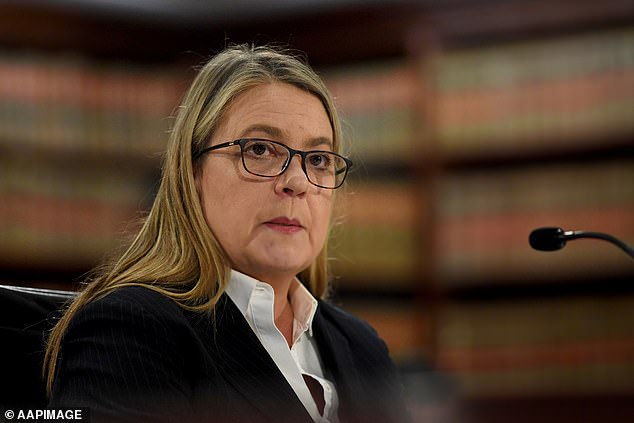 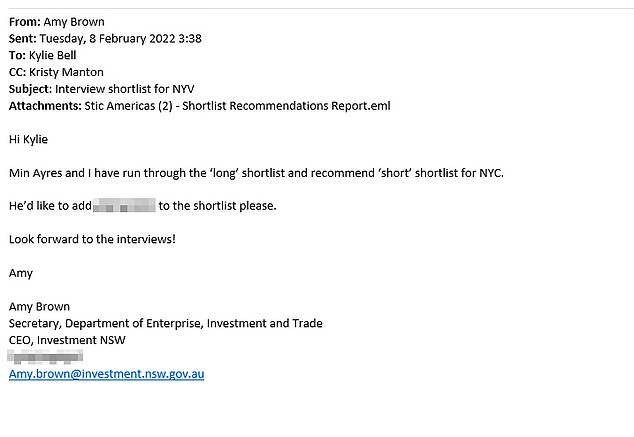 The email (mock-up pictured) seems to imply trade minister Stuart Ayres was consulted in the hiring process of the American commissioner role, despite previous claims the government was kept at arm’s length from the hiring process

‘The discussion was about people that were already on the list,’ he said.

‘It wasn’t a request from me, it was merely a discussion that took place in the office about the people that were on the short list.

‘The decision on who goes onto that short list is not for me.’

He insisted he would not step aside as Deputy Liberal Leader despite mounting pressure.

Labor accused Mr Ayres of lying after he said he did not meet with Mr Barilaro during the recruitment process and had maintained his distance.

Premier Dominic Perrottet and his ministers have insisted hiring for the Senior Trade and Investment Commissioner to the Americas role was a matter purely decided by the public service.

What the inquiry heard about Jenny West losing her dream job

Top public servant Jenny West was told on October 1 last year that she would ultimately not be getting the posting to New York.

That’s despite Investment NSW chief Amy Brown admitting to the Legislative Council inquiry that she was an ‘excellent candidate’, and that hundreds of thousands of taxpayer dollars had been spent on the recruitment process.

Ms Brown told the inquiry her entire relationship with Ms West had deteriorated.

‘The relationship declined quite quickly once she was informed that she may not be going to New York,’ she said.

When Ms West fronted the inquiry she called the scandal a ‘very disappointing episode in (her) life,’ and pointed to her experience – which included more-than 20 years in the public sector including roles at Austrade, the NSW Treasury, Telstra, Diageo and Westpac.

She said Ms Brown told her that her existing job at Investment NSW was also in danger.

‘In the space of four weeks I went from having been appointed to the role of the Senior Trade and Investment Commissioner to the Americas to potentially not having a job. I felt so confused by what Ms Brown had told me,’ Ms West told the inquiry.

‘Until the events of last year I thoroughly enjoyed my time in the Federal and New South Wales public sectors and I believe I achieved my goal of making a difference alongside many other hardworking and dedicated public servants who shared my values and integrity.

‘Until Ms Brown’s in-camera evidence before this inquiry on 29 June 2021, I have never been told that my appointment to the Senior Trade and Investment Commissioner to the Americas role had been withdrawn because of concerns about my professional experience or performance,’ she said.’

NYT reports 900,000 children have been hospitalized in US with Covid when true figure 63,000