John Cornyn insisted he was joking when he told other senators that he would move onto a deal on immigration after he negotiated the Senate deal on gun reform legislation.

‘The Democrats and their allies in the media really can’t take a joke,’ Cornyn told conservative outlet Breitbart News on Wednesday. ‘There’s no secret amnesty bill.’

The Texas senator’s office said he was joking and there are no planned or ongoing immigration negotiations.

The Senate passed the gun reform legislation – negotiated by Cornyn and Connecticut Democratic Senator Chris Murphy – on Tuesday evening. The bill will now go to the House for reconciliation.

‘That’s right, we’re going to do it,’ Senator Kyrsten Sinema of Arizona was heard replying. 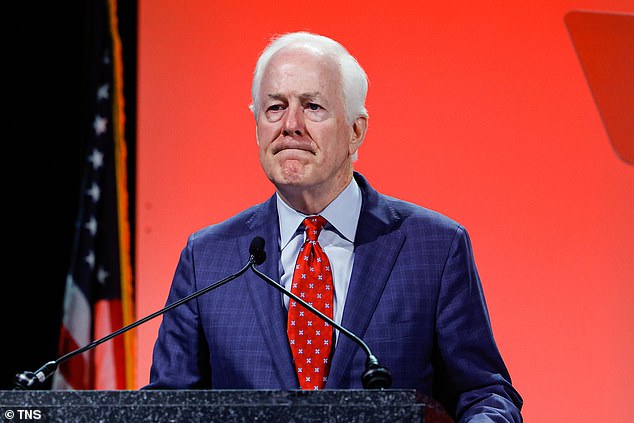 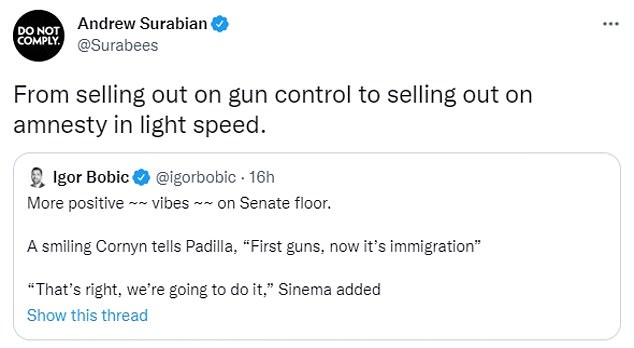 Now the Texas lawmaker, who was tapped by Senate Minority Leader Mitch McConnell to lead gun reform negotiations, is walking back on those comments.

Cornyn cannot afford to lose any more political capital with his constituents after he was booed at the Texas annual Republican Party convention last Friday regarding his work with Democrats to pass gun control laws.

Immigration is a hot button issue in Texas – as is guns.

‘From selling out on gun control to selling out on amnesty in light speed,’ Andrew Surabian, a former special assistant and deputy strategist to then-President Donald Trump, said of Cornyn’s pledge for amnesty.

The migration crisis is prevailing at the southern border and is specifically impacting southwest U.S. states of Texas, Arizona and New Mexico.

In May alone, Customs and Border Protection (CBP) encountered 239,416 migrants crossing illegally into the U.S. at the southern border – a new high of President Joe Biden’s time in office and a two-decade record.

The May figure is the fourth straight monthly increase from January, when figures were down to 154,816 for the month.

Despite insistence that a deal with Democrats on immigration is in the works, Cornyn has pushed for amnesty. 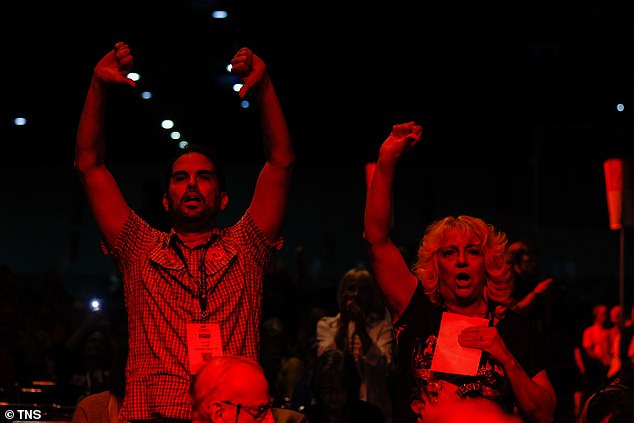 Cornyn, GOP Senator Thom Tillis of North Carolina and leftist Senators Padilla and Dick Durbin of Illinois, who is the Senate Democratic Whip, have all pushed for an amnesty bill.

Tillis said in April: ‘The only way that we’re going to get real progress is to have a four-pillar discussion — so immigration reform, DACA, border security and then I think asylum reform is pretty important, particularly with that’s going on with Title 42.’

‘We’ve got a starting list,’ Durbin said. ‘There could be some more. But it’s a starting point. I’ve talked to four or five Republican senators today. There’s a genuine interest in doing something.’

Texas is the largest red state in the U.S. and is one of the most Republican states in the country, with the usual exception of its city epicenters.

The Lone Star State also has some of the more relaxed gun laws compared to other U.S. states. For Texas residents, both conceal and open carry is permitted without a permit as long as the individual is 21-years-old and can legally own a handgun.

Texas father was arrested after video showed his son, 4, begging for food before dying of starvation