The landmark Roe v. Wade abortion case was on the line once again Thursday, with the Supreme Court preparing to issue opinions on Thursday and Friday that could decide abortion rights.

The leaked draft of an opinion authored by Justice Antonin Scalia has already telegraphed that a majority was prepared to strike down the landmark abortion ruling while deciding the Dobbs v. Jackson Women’s Health Organization case.

In a signal that the Biden administration is at least preparing for bad news, Vice President Kamala Harris is set to hold an event with state attorneys general Thursdays afternoon on their ‘efforts protecting reproductive health care access.’

If the Court does strike down Roe, the administration will be forced to rely on law enforcement, potential executive actions, and other measures to try to ensure access to abortion rights in states that have been whittling away at the practice for years. 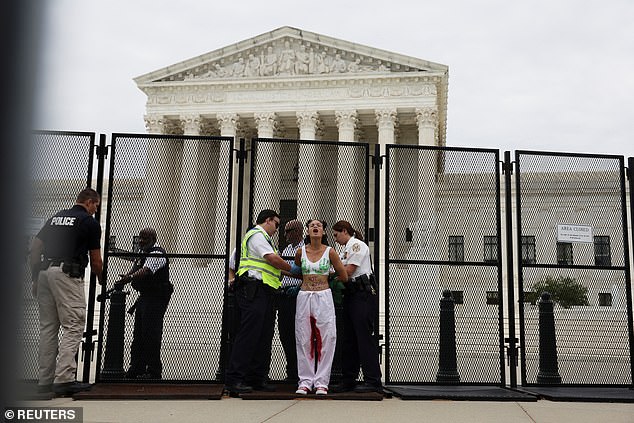 An abortion rights supporter is arrested outside the United States Supreme Court in Washington, U.S., June 21, 2022. The Supreme Court is surrounded by high metal fencing. It issued five rulings Tuesday, but none dealing with abortion. It issues new opinions on Thursday

Protesters on both sides of the contentious issue have been gathering outside the court daily during the final days of the court’s term, which usually ends in late June.

The building is surrounded by a tall fence that went up after the draft leaked last month.

If judges haven’t switched their positions since Alito authored the draft, it would result in the overturning of the landmark 1973 Roe v. Wade decision which provides for abortion rights.

With public attention focusing on the court, where conservatives hold a 6-3 majority, Congress passed legislation to provide security protection to justices, after an armed man was arrested outside Justice Brett Kavanaugh’s home.

The case, Dobbs v. Jackson Women’s Health Organization, is among the most closely watched cases on the court’s docket, which includes other cases on gun control and other controversial issues that have yet to be decided.