A furious father has threatened to take Amazon to court after a devastating house fire broke out when his son’s £35 Echo device burst into flames and exploded.

Abdulla Maflehi, 50, says he has taken legal advice after the faulty device caused £5,000 worth of damage at his three-storey home in Kidderminster, Worcs.

Aaron Maflehi, 15, had been at home when he smelled smoke and discovered his brother Benjamin’s bedroom was bellowing out plumes of thick black smoke.

He quickly called his father, who was at a friends house, before fire crews rushed to the scene.

But the blaze tore though the family home, decimating beloved toys, clothes and furniture as shocking photos also showed ceiling, walls and carpets burnt to a crisp.

Luckily, Benjamin, 14, was not at home at the time of the terrifying 10-minute fire and was staying with his mother, Sofia, in Birmingham.

Mr Maflehi, a supply teacher, said firefighters confirmed the cause of the blaze as being an electrical fault with an Amazon Echo Show 5.

He told the Sun: ‘It was a blessing Benjamin wasn’t here. If any of us had been in his room, we’d have died.’ 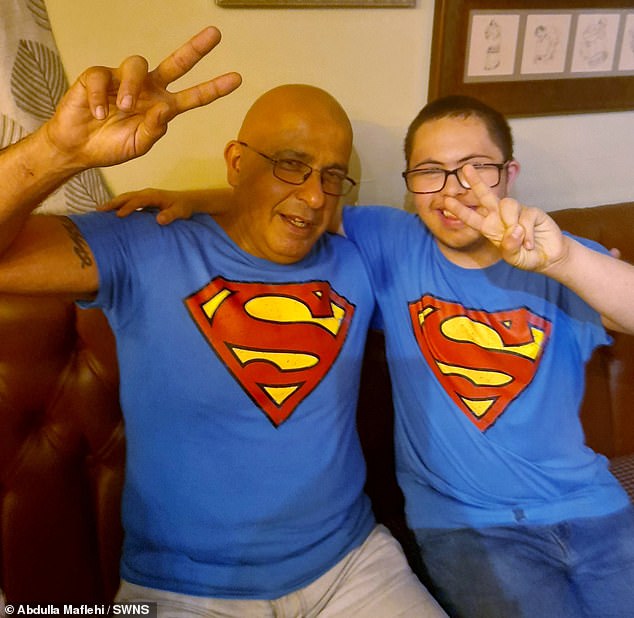 Abdulla Maflehi, 50, has shared his fury at retail giant Amazon after his 14-year-old son Benjamin’s (right) Amazon Echo device burst into flames and exploded at the family’s Worcestershire home 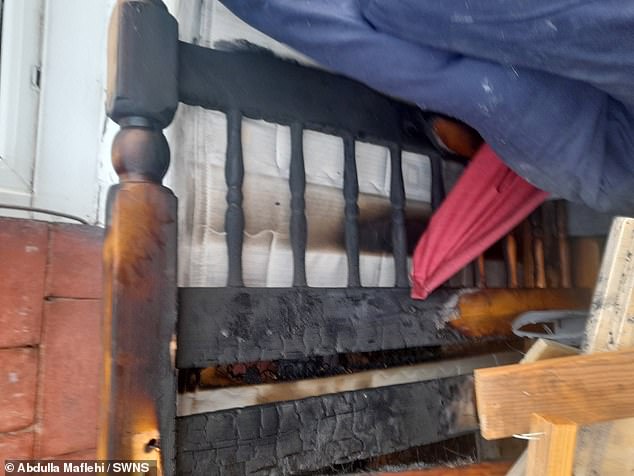 Shocking photos show how the ceiling, walls and carpets were also destroyed by the flames which quickly ripped through the three-storey terraced property in Kidderminster 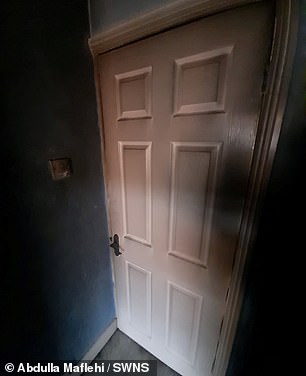 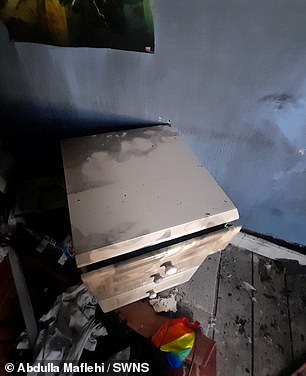 The blaze tore though the family’s Kidderminster home, decimating beloved toys, clothes and furniture and causing at least £5,000 worth of damage. Pictured: The soot-covered aftermath of Benjamin’s room following the fire

Mr Maflehi complained to the company, who offered him a £100 voucher to cover the cost of the device, which Benjamin used to listen to music on.

But he declined the offer, feeling ‘fobbed off’ by Amazon, who he said are ‘not taking responsibility’ for the thousands of pounds worth of damage caused.

Single father Mr Maflehi said he is even willing to take legal action against the online retail giant and go to court.

He said: ‘It’s a total insult. It’s caused so much damage.

‘The whole room has been devastated. The fire service had to throw everything out of the window.

‘It set everything alight in ten minutes. If any of us had actually been there in the room at the time, we would have been killed.

‘But all Amazon have done is say I can have a voucher, well that doesn’t cover the cost of everything that went up in flames because of their device.

‘I’ve seen a solicitor and I’m willing to take it all the way to court because it’s cost me a lot to put right and that isn’t taking into the account the distress and inconvenience.

‘When I first saw the fire, I just felt really really sick, and worried that we were going to lose everything in the house.

‘The fire only lasted for ten minutes, but there was so much damage done in that time.

‘When the fire chief turned around and said the device was the cause of the fire, I was so shocked and horrified.

‘I bought him the device to play music for him. He loved it to bits. 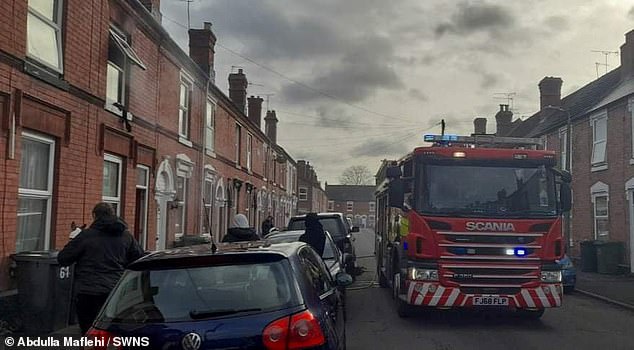 The device, which Abdulla purchased eight months ago, completely melted at the scene and was removed by the fire brigade (pictured at the scene earlier this year) 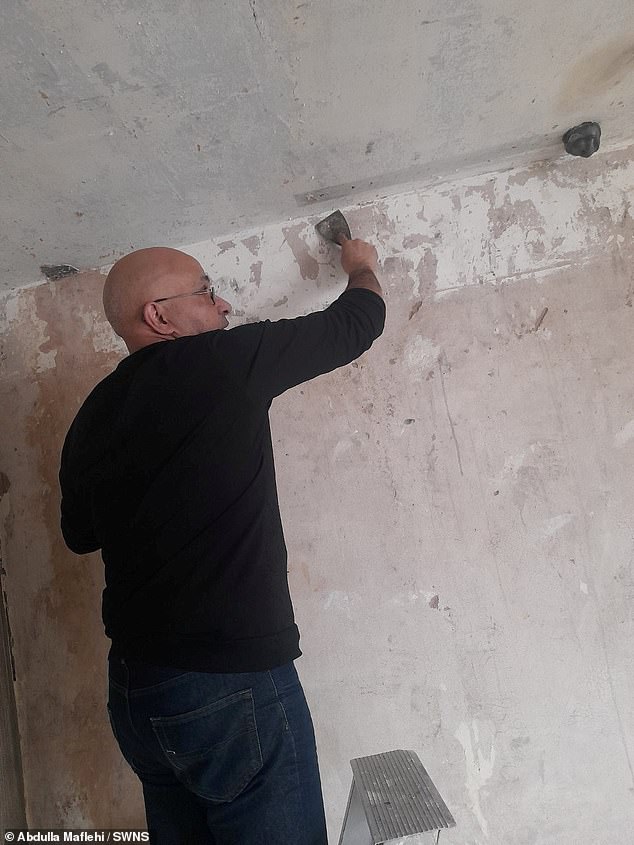 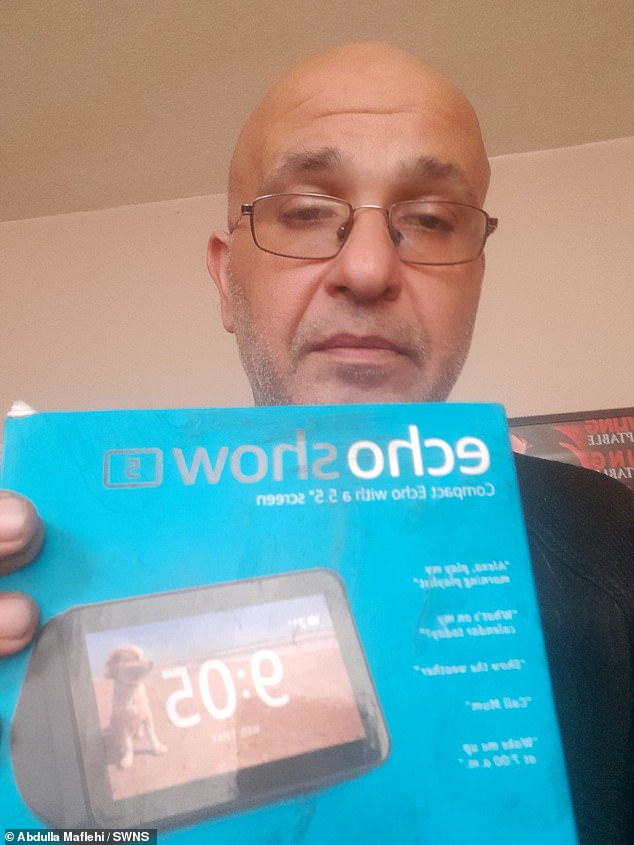 Mr Maflehi complained to the company, who offered him a £100 voucher to cover the cost of the device, which Benjamin used to listen to music on

‘He loves music and listens to Spotify playlists. He also loves dancing to whatever I play.

‘Luckily he wasn’t at the house at the time. I still haven’t told him about what happened.’

Mr Maflehi was at a neighbour’s house on the same street when the fire broke out at 11.30am on February 6.

The device, which Abdulla purchased eight months ago, completely melted at the scene and was removed by the fire brigade.

A fire report by Hereford & Worcester Fire Service stated the cause of the fire was ‘fault in equipment or appliance’ namely an ‘Amazon Alexa’.

Mr Maflehi added: ‘I was round an elderly friend’s house when my son said: “Dad the house is on fire”.

‘They said they could smell burning, as if a candle had gone off. 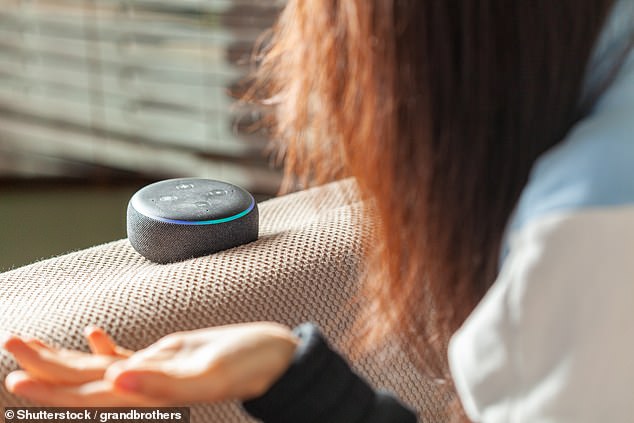 An Amazon spokesman said the company conducts ‘rigorous testing’ and takes ‘several steps to ensure the safety of our devices’. Pictured: The original Amazon Echo device

‘But when they went outside, they could see smoke billowing from the windows on the second floor of the house.

‘When I got back I ran upstairs and jammed the bedroom door shut to isolate the blaze.

‘The fire crew later told that me the whole house would have been destroyed if I hadn’t have done so.’

A spokesperson for Amazon said: ‘We care deeply about the safety of our customers and understand this has been a difficult time for Mr Maflehi and his family.

‘We take several steps to ensure the safety of our devices including rigorous testing by our own teams and third party labs, and we are confident our Echo devices meet our strict safety standards.’

Amazon will move 1,800 workers from downtown Seattle offices because of rampant crime