Heartwarming video shows the moment a Seattle dog owner was reunited with her black Labrador retriever after the presumed dead pup survived for nearly a week buried under a hail of debris left by a landslide that leveled her home.

‘It’s Mommy!’ a sobbing but overjoyed Didi Fritts can be heard saying in the Thursday footage as a fireman emerges with her pooch Sammy.

Once reunited, an emotional Fritts attempts to comfort the clearly shaken animal.

‘My baby. My baby,’ the dog mom coos to her pet in the clip, which was released by the Seattle Fire Department later that day. 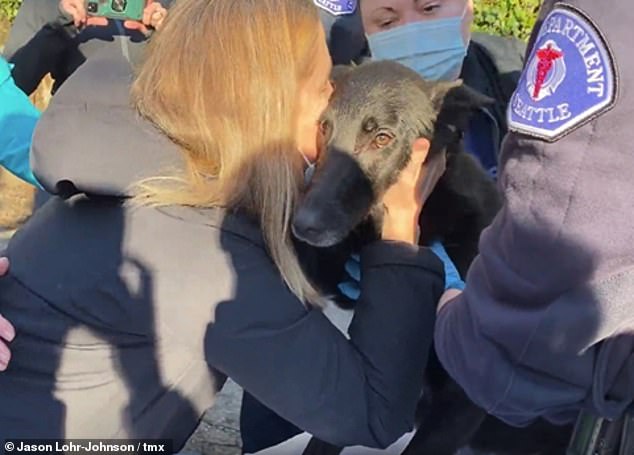 Heartwarming video shows the moment Seattle dog owner Didi Fritts was reunited with her black Labrador retriever Sally Thursday, after the presumed dead pup survived for nearly a week buried under a hail of debris left by a landslide that leveled her home 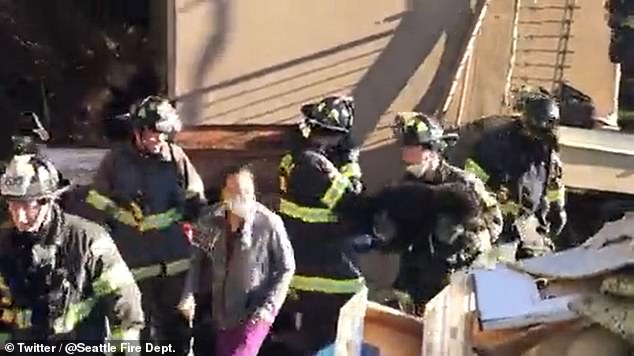 Touching footage shows the rescue effort, with one Seattle fireman emerging from the debris with the still-shaken pooch. The pup had been discounted as dead last Friday, after the two-story, hillside home in the seaside Magnolia neighborhood of Seattle collapsed on itself

The touching reunion came as a great relief to Fritts, whose life was sent reeling Friday after the Magnolia home she shared with her husband, James, literally collapsed on itself last Friday.

The pair, as well as their two pooches, three-year-old Sammy and her sister, Lilli, had been inside the house when it was destroyed, sliding 15 feet off its foundation on a hill overlooking the Pacific Ocean due to a landslide.

Miraculously, the Frittses, who were caught in the collapse, managed to escape the wreckage and survive. 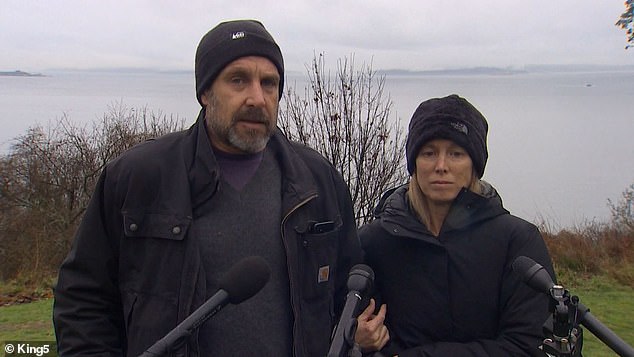 Didi, right, and her husband James, pictured here being interviewed after the collapse, had been inside the house as it collapsed last Friday, but miraculously escaped the ordeal unhurt

‘It was a loud roar, and the whole thing came down on us,’ Didi told local outlet King 5 Friday after the harrowing ordeal.

She recounted to the paper how, through the chaos, she was able to locate her husband in the debris of the two-story home, which has since been deemed to be no longer fit to be lived in by the city’s Department of Construction and Inspections.

Didi said she was heading for the front door of the house when the natural disaster stuck, causing the second story to collapse.

The Seattle woman then found herself pinned beneath a layer of debris and dirt. 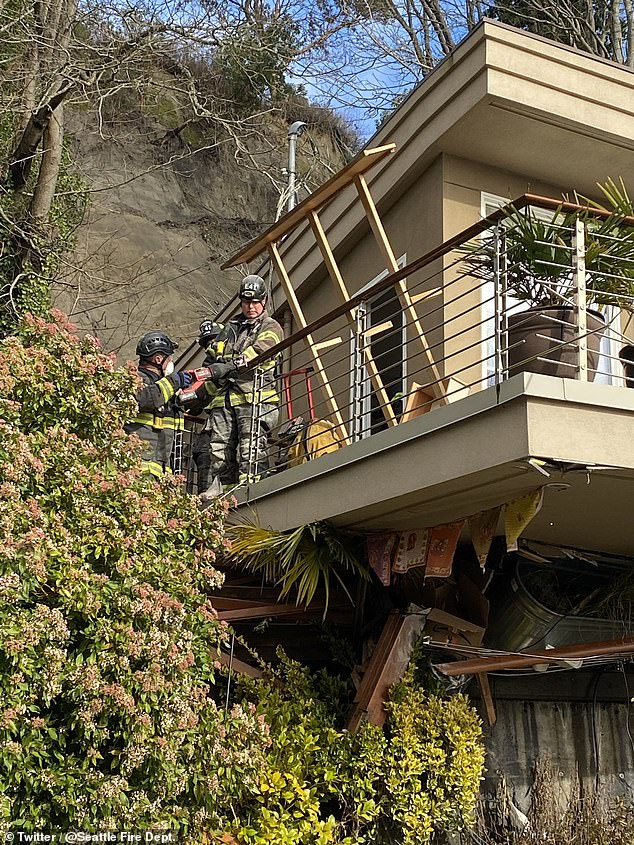 Firefighters returned to the scene Thursday, nearly a week after the disastrous event, after a neighbor reported hearing whimpers in the wreckage 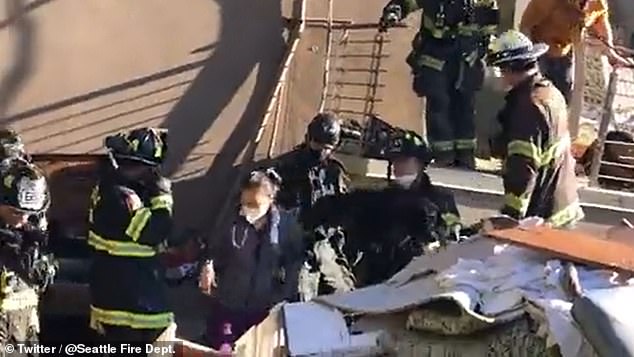 Her husband, meanwhile, found himself pinned by the pair’s refrigerator, which had fell on his legs, making it impossible for him to move.

‘My mouth and throat were covered, filled with dust,’ Didi recalled. ‘I didn’t know where I was, and I thought he was dead, and I was screaming for him, screaming, and then I heard him say he was alive. He was alive.’

By the skin of her teeth, Didi said she managed to free herself from the rubble and crawl her way out of the home, talking to her husband has she made her way to safety.

James, meanwhile, said he had to wait for the firefighters to rescue him after nearly an hour of excavating. 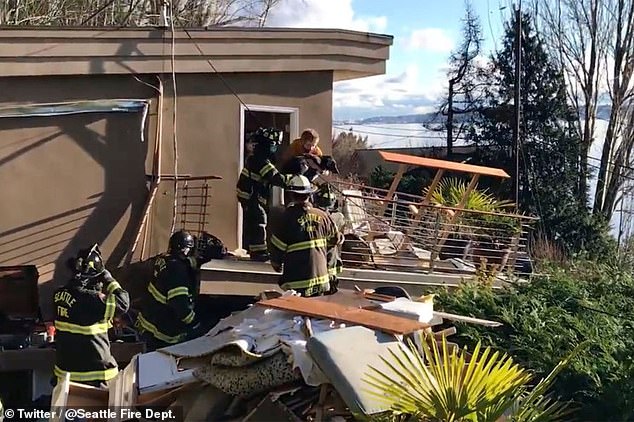 Somehow, both escaped the disaster essentially unscathed, with only minor injuries.

Sadly, however, it looked as if their two beloved pups had not been so lucky.

James revealed to rescue officials that he saw Lily crushed to death by debris just inches away from him while he was pinned by the refrigerator.

After a great deal of searching, officials presumed that the pup suffered the same fate as her sister, whose body could not be immediately recovered due to the sheer amount of debris at the scene.

But the Fritses were graced with a glimmer of hope Thursday, when wary neighbors reported that they had heard a whimper from the wreckage earlier in the day, KING 5 reported.

‘We [heard] a little cry this morning, and then didn’t hear anything when the fire department was here with the chainsaws,’ family friend and neighbor Remy Olivier told the station.

Upon receiving the call, rescue officials promptly returned to the scene, where they worked for hours to remove debris from what was left of the domicile’s living room, where Sammy was last seen, and where her sister was crushed, the outlet reported.

Eventually, firemen were able to locate the animal – allowing for the impassioned reunion with Didi, who along with her husband rushed to the scene when she heard news of her neighbor’s claims.

‘We just pulled apart the entire floor and we pulled her out,’ Olivier said. ‘She looked like she had just enough room to survive. She wasn’t crushed by anything, or punctured. She had just a tiny bit of room. I guess she was surviving on rainwater the past couple of days.

The reunion was somewhat bittersweet however, as officials were able to uncover Lilly’s body as well during the rescue, which, in a heart-wrenching display, was being dutifully guarded by her surviving sister.

‘We found her right next to her sister,’ Oliver told The Seattle Times after the sudden rescue operation. ‘She’s been next to the other dog this whole time.

He added: ‘We hadn’t been looking for living dogs. We assumed that she was in the crush because there’s not much left of the house.’

After the ordeal, James thanked rescue officials for their efforts.

‘I just want to say thank you to the Seattle Fire Department and the EMTs and my neighbors and all the amazing people,’ he said. ‘We are miracles, and every day is a gift. So, pay it forward and be of service.’

Five men to serve 120 years in prison for gunning down Birmingham businessman, 24, during Ramadan