No penises, please: Lesbian who wants to ban trans women and men from her public parties comes under fire – but she fires back: ‘It’s humiliating being told to include someone with a d**k’

A lesbian who wants to ban anyone with ‘penises’ from attending her drag events has vowed to take her fight against the anti-discrimination watchdog to the High Court.

Jess Hoyle wants to hold lesbian-only drag nights in her Tasmanian hometown of Launceston, but would refuse to welcome transgender women or men.

The state’s anti-discrimination commissioner stepped in when Ms Hoyle applied for an exemption, saying there was a ‘significant risk’ she would be breaking the law.

Ms Hoyle, 34, said it was important for lesbian women to have their own spaces and for gay men to do the same.

‘There were queer events but they were mixed and a lot of lesbians didn’t like going there because it was a breeding ground for heterosexual men,’ she told Daily Mail Australia.

‘Because of self-ID laws we have to take in biological males who think they could be something else and it’s really not that fair. It wasn’t safe for same-sex attracted women.

‘Lesbians have lost all their spaces.’ Jess Hoyle wants to hold lesbian-only drag nights in her Tasmanian hometown of Launceston, but would refuse to welcome transgender women or men

In denying the exemption Tasmanian Anti-Discrimination Commissioner Sarah Bolt argued it would be ‘offensive, humiliating, intimidating, insulting’ to ask people to prove they were biologically female.

Ms Bolt believed Ms Hoyle’s application went further than other state exemptions by ‘requiring people to provide intimate information about their body to gain access to the proposed events’.

‘I think it’s actually humiliating towards lesbians being told they have to include someone with a d**k,’ she said.

‘That’s fine if he wants to be transgendered, it’s OK. But at the end of the day trans women are trans women, in other words they are men.’

She denied she would be peering into any trousers to sort out who the trans women were.

‘You can sort of tell just by looking at them. You can tell by their voice by their walk, you can look at their hips and know they are a man,’ she said.

‘LGB is same-sex attracted. Why would I want a bloke? They can have their events, I can have mine.

‘Why should we be gaslighted out of who we are? If you are trans, good for you, but don’t force it on to me.’

Ms Hoyle’s case is before the Tasmanian Civil and Administrative Tribunal, which has a November deadline to come to a decision.

Anna Kerr from the Feminist Legal Clinic, who is representing Ms Hoyle, said the tribunal could rule lesbians are a disadvantaged group who are benefited by discriminating against biological males.

However, it could also show Tasmania’s laws are inconsistent with Commonwealth sex discrimination legislation, but that would need a High Court challenge to prove.

‘This could yet turn into a test case on this important question,’ Ms Kerr told the Daily Telegraph.

If the ruling doesn’t go her way Ms Hoyle is prepared to take the case to the High Court and has already raised $3000 for legal costs. 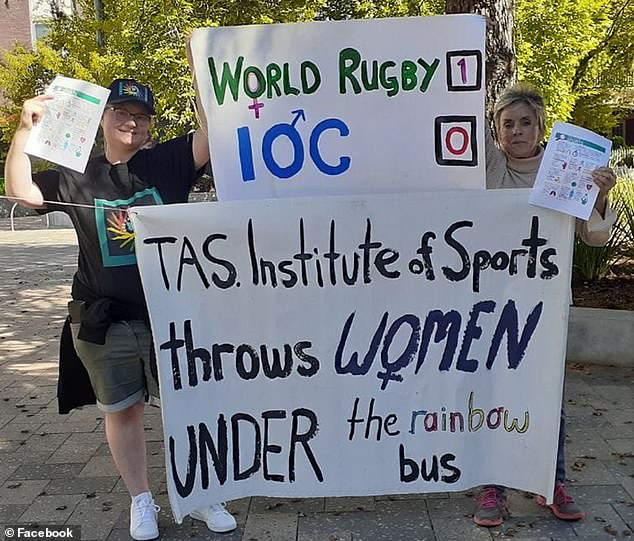 ‘This isn’t about hate, this about sitting down and having a conversation about what are our rights what are fundamental rights and fundamental demands,’ she said.

‘What I am seeing is demands of biological men of wanting to come into lesbian spaces and lesbian dating apps and gaslight a majority of same-sex attracted women.

‘It’s not good and we need to have spaces set up that cater for trans and gender diverse.

‘That means them having their own dating apps, their own spaces and their own events.’