Brussels is expected to cave in today to British demands to axe Brexit red tape and the majority of checks on goods sold to Northern Ireland.

Eurocrats have blinked first in the so-called Sausage War after Brexit minister Lord Frost warned the bloc risked a ‘historic misjudgment’ over the Northern Ireland protocol.

The move, which will cover goods such as chilled meats and plants entering the province from the British mainland, represents a huge climbdown for the European Commission.

Maros Sefcovic, the EU executive’s Brexit enforcer, will insist that the offer is not ‘a take it or leave it’ proposal. 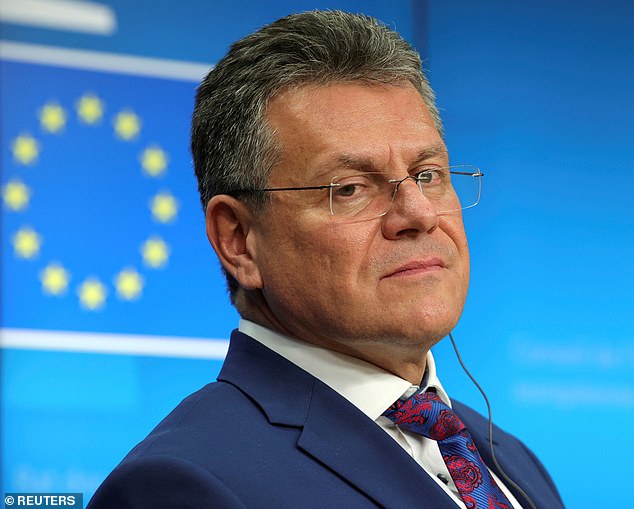 Lord Frost and the Slovak diplomat are set for weeks of intensive talks to thrash out a possible compromise.

One senior EU source said last night that the proposals will move towards the ‘light touch regime Britain had been seeking’. They added: ‘There will always be a certain level of control and checks because that is demanded by the single market, but they will be reduced to a level, which is the absolute minimum, that the EU system can bear.

‘I think for any reasonable person. They should be able to see that the remaining level of restrictions are extremely low, and shouldn’t pose any difficulties for importers or consumers in Northern Ireland.’ 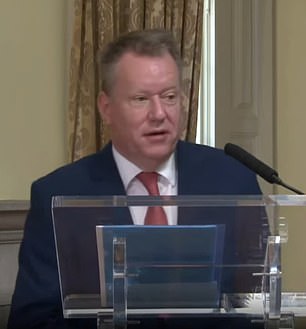 It comes after Lord Frost last night reissued a threat to suspend part of the Brexit deal that keeps Northern Ireland inside the bloc’s single market.

He said the arrangement was ‘shredding’ the Good Friday Agreement and had become ‘the biggest source of mistrust’ between Britain and the bloc.

He said the UK was ready to unilaterally trigger Article 16 and suspend the protocol unless it was ripped up and reformed.

He also demanded that the role of the European Court of Justice in policing the agreement – another part of the deal he struck with the EU – must end.

He also appeared to take a swipe at the EU’s leadership, saying it didn’t ‘always look like it wants us to succeed’. And he insisted it would ‘take two’ to repair the ‘fractious’ relationship. ‘Northern Ireland is not EU territory. It is our responsibility to safeguard peace and prosperity and that may include using Article 16 if necessary,’ he declared in a speech in Lisbon.

Brussels had previously claimed it will not consider any changes to the protocol.

Lord Frost said the UK would consider whatever Mr Sefcovic put forward ‘seriously, fully and positively’ and insisted the UK’s proposals would not undermine the single market. Lord Frost’s demand to replace the role of the European Court of Justice in policing the protocol with a system of international arbitration was last night dismissed by a senior EU diplomat who said it would be ‘impossible’ for the EU to deliver on.

Ireland’s deputy prime minister Leo Varadkar yesterday said the demands would be ‘very hard to accept’, adding: ‘I don’t think we could ever have a situation where another court could decide what the rules of the single market are.’

Lord Frost took aim at French president Emmanuel Macron and his EU allies, saying Britain was ‘constantly faced with generalised accusations that [we] can’t be trusted and are not a reasonable international actor’.

He claimed that alienation between the two sides would be a ‘serious historical error’.

He said: ‘We just want friendly relations, free trade and the chance to do things our own way, all within the framework of a meaningful and robust Western alliance.

‘With this in mind, I do urge you to look at the image you are presenting to us. If there is a trust problem, as we are constantly told there is, it is not the responsibility of only one party.

‘At some point we must both try to raise our eyes to the horizon, look at the possibilities for better relations, and try to help each other solve problems, not create them.’

Any agreement between the two sides would need to be signed off by the 27 EU governments before becoming final.