My Pillow CEO Mike Lindell claimed during an appearance on Real America’s Voice that he had enough voter fraud evidence to put nearly the entire population of the U.S. in prison.

‘We already have all the pieces of the puzzle. When you talk about evidence, we have enough evidence to put everybody in prison for life, 300-some million people,’ the top ally of former President Donald Trump said. ‘We had that all the way back in November-December, but what we have are these other things that had to happen,, which is evil revealing itself.’

After Trump lost the 2020 election, Lindell became one of the most prominent faces of the so-called ‘big lie,’ that the ex-president was robbed a second term due to widespread voter fraud. 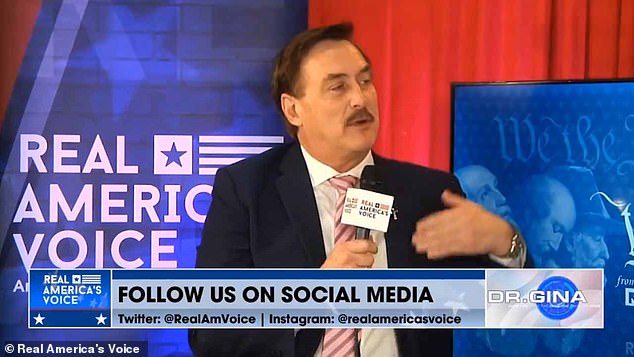 My Pillow CEO Mike Lindell claimed during an appearance on Real America’s Voice that he had enough voter fraud evidence to put nearly the entire population of the U.S. in prison

There wasn’t widespread voter fraud in the 2020 election, as determined by droves of election officials and courts, but both Trump and Lindell have continued to insist otherwise.

During the segment, Lindell also said he was ‘more optimistic today than I have been’ about the prospects of widespread voter fraud being unearthed.

He then claimed evil is popping up ‘everywhere’ like the game ‘Whac-A-Mole.’

‘That all had to be revealed so we could fix them,’ he then said.

Lindell was among the list of guest speakers who will be the opening acts for Trump at the ex-president’s first rally of 2022 in Saturday.

The rally will take place in Florence, Arizona, located 60 miles outside of Phoenix.

Two of Trump’s handpicked candidates –  Kari Lake for Arizona governor and Mark Finchem for secretary of state – will also be on hand.

Rounding out the guest speaker list are Kelli Ward, the chairwoman of the Republican Party of Arizona, Dr. Alveda King, a niece of civil rights leader Martin Luther King Jr. who served on Trump’s 2020 advisory committee and Boris Epshteyn, an adviser to Trump’s 2020 campaign.