Little House on the Prairie star Melissa Gilbert and her husband have ditched the dazzling lights of Hollywood for the tinkling stars of the New York Catskills.

Gilbert, 58, is enjoying the simple life after she escaped to a 14-acre property in the Catskill mountains – only 20 minutes away from the famed Woodstock location – where the star said she has ditched plastic surgery and Hollywood expectations for the freedom of being in her own skin, she told Fox News.

‘This is me now – no hair color, no filler, no implants, no Botox. I just take care of myself. I try to eat as well as I can. I drink a lot of water. And I’m really enjoying the aging process because of that.

‘[Aging] is an uphill battle. Eventually, everyone loses. It just does not fit in with who I am and what my life is now. It’s exhausting and it’s unnecessary. I had to find a place within myself where I could stop trying to, or feeling like I needed to be what everybody else wanted me to be and be exactly who I am.’

She earlier told People magazine: ‘I finally woke up and went, ‘What am I doing? I look like a carrot top, and I’m not happy’.

Gilbert, who played Laura Ingalls in classic TV series, revealed in her 2010 memoir how she struggled with drugs and alcoholism, resorted to plastic surgery multiples times throughout her career and had a series of checkered relationships with some of Hollywood’s leading men. 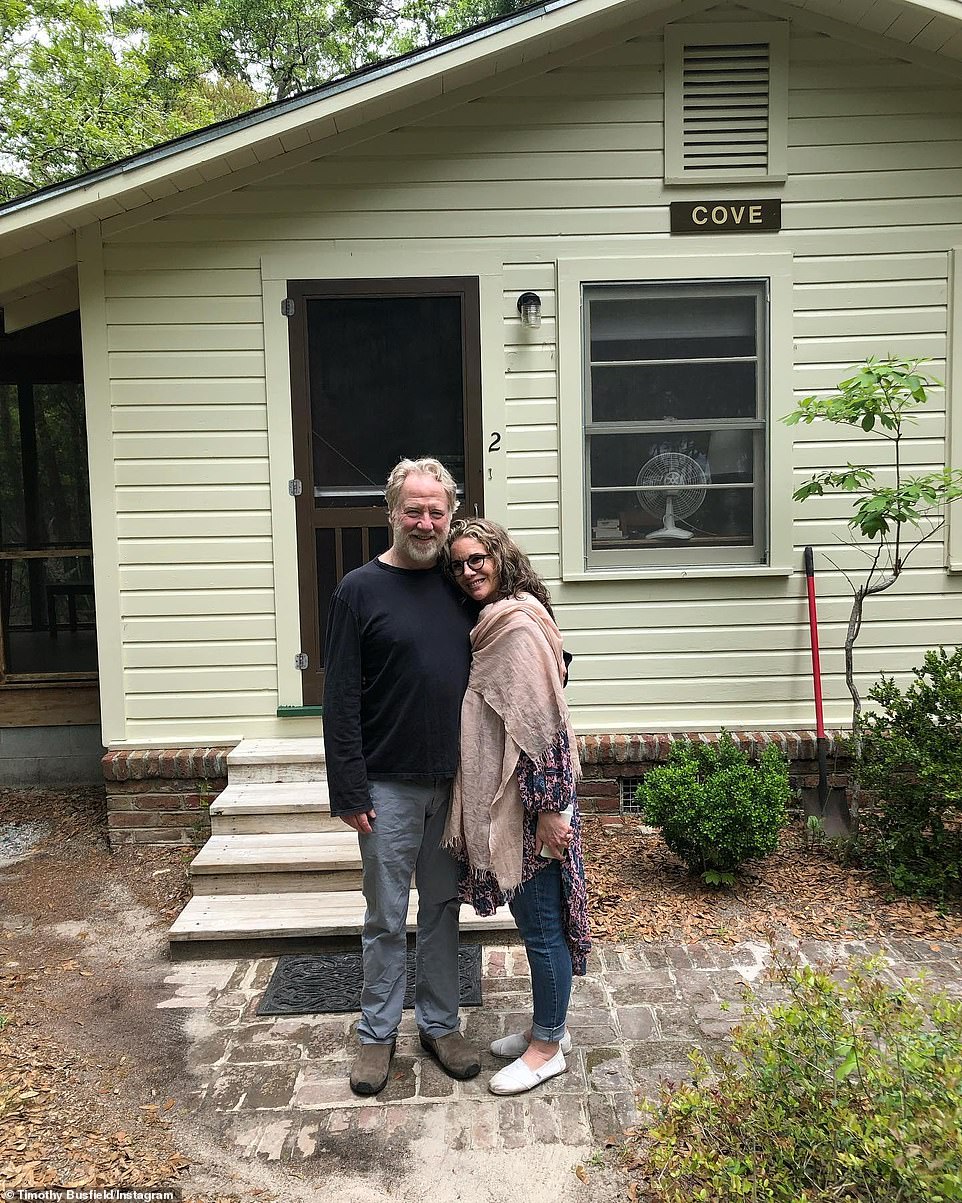 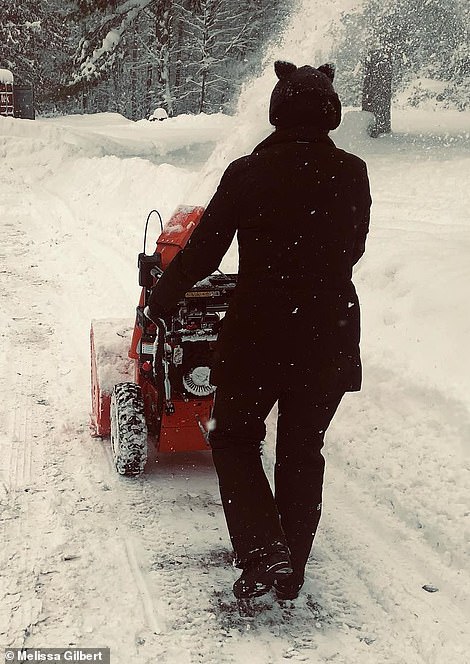 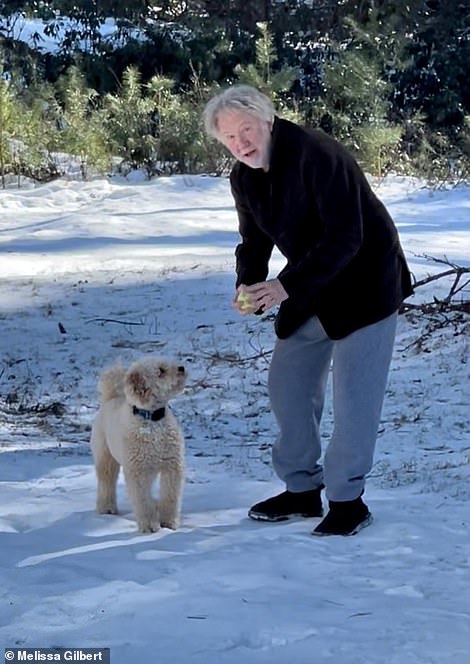 Now the actress (left) – who played Laura Ingalls in classic series – has left Hollywood behind to enjoy raising chickens, grows her food, and plowing the snow in the harsh New York winters (pictured),alongside her director husband (right) whom she married in 2013 and shares a dog Chicago (right) 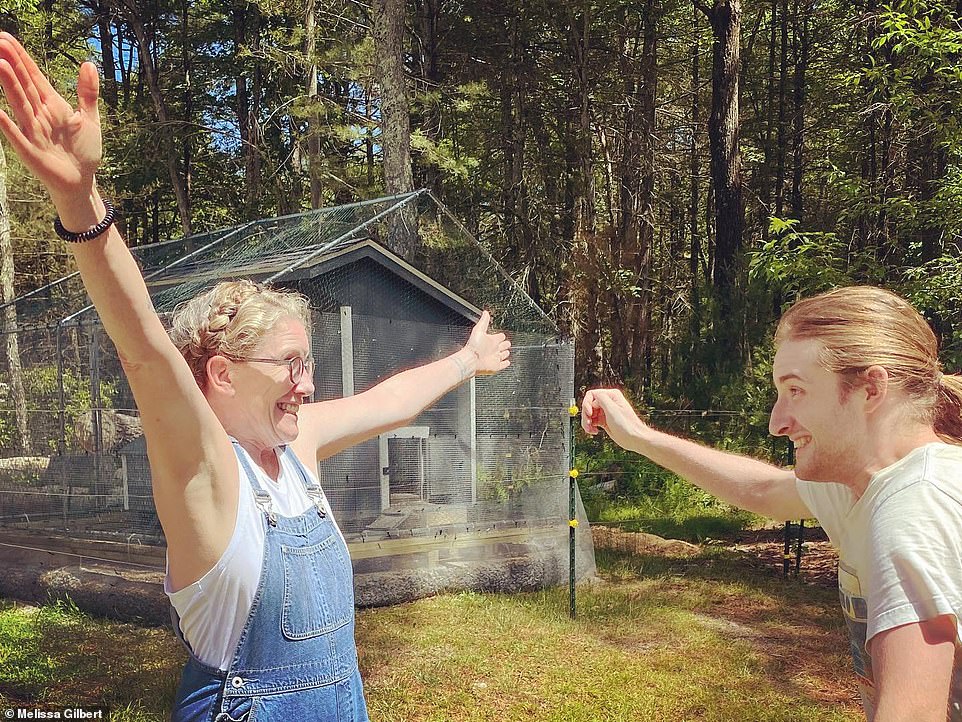 The star (pictured with her son) said she has ditched plastic surgery and Hollywood expectations for the freedom of being in her own skin. ‘I finally woke up and went, ‘What am I doing? I look like a carrot top, and I’m not happy,’ she said. ‘I had to find a place within myself where I could stop trying to, or feeling like I needed to be what everybody else wanted me to be and be exactly who I am’

The actress, who once admitted to drinking two bottles of wine a night by herself, claimed she use to be attracted to ‘men who smelled like alcohol’ after starring alongside Michael Landon who ‘sipped vodka from his coffee mug.’

She realized she had a drinking problem when she passed out and woke up in a dog bed while a friend was over dinner and prompted her to go to therapy and attend AA meetings, Today reported in 2009.

The 58-year-old also had three nose jobs by the age of 20 after many makeup artists would contour her nose to make it look smaller; became involved with Tom Cruise, among other high-profiled men; and even had an unplanned pregnancy with then-boyfriend Rob Lowe, whom she started dating at 17.

She is now leaving that all behind to enjoy the harsh New York winters, raising chickens, and growing her food, alongside her third husband director Timothy Busfield, 64, whom she married in 2013 and shares a dog Chicago. It was also his third marriage. 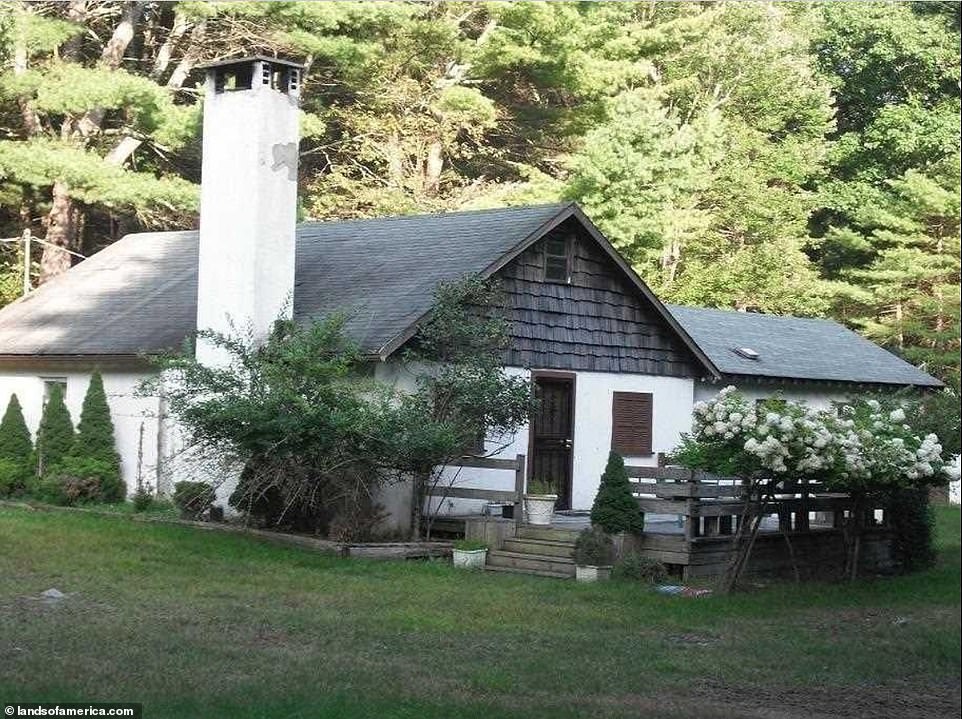 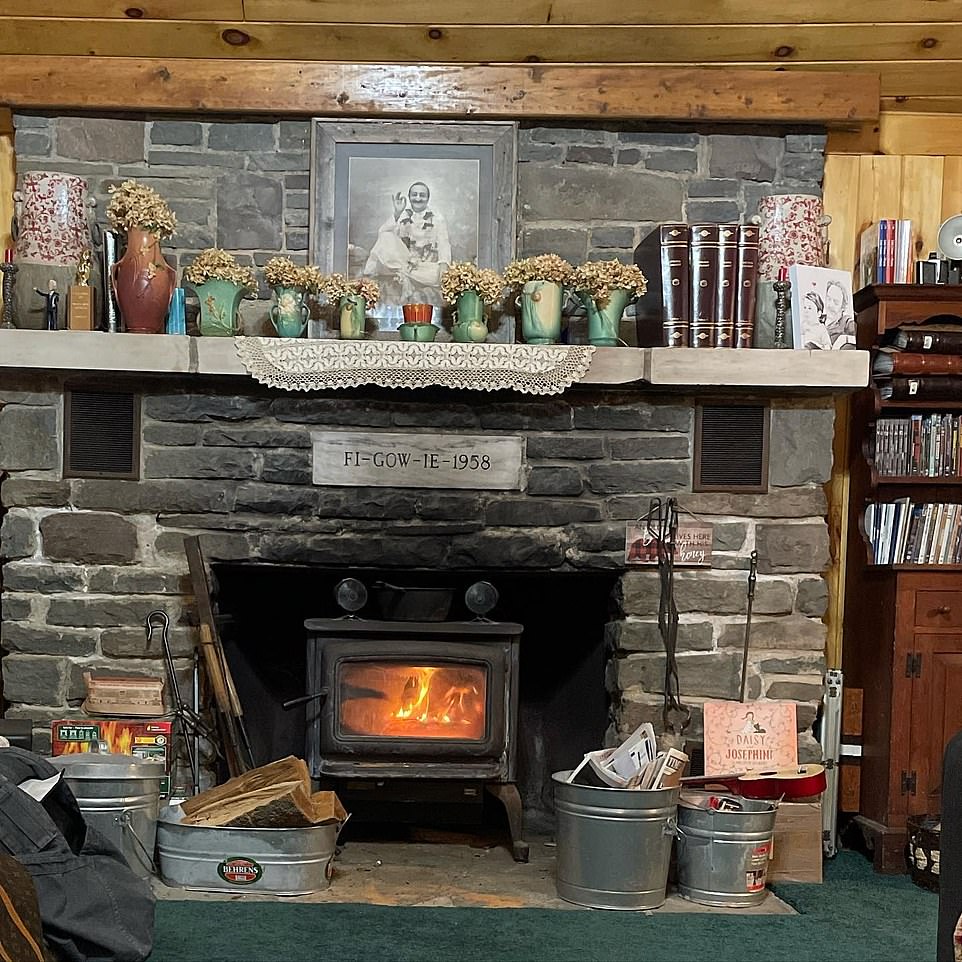 The home, which started out as a fixer-upper and was livable, now shows the couple’s unique taste, with their mantel filled with potted plants, and photographs. They also have a wood-burning fireplace and rustic shelving that appears to old DVDs 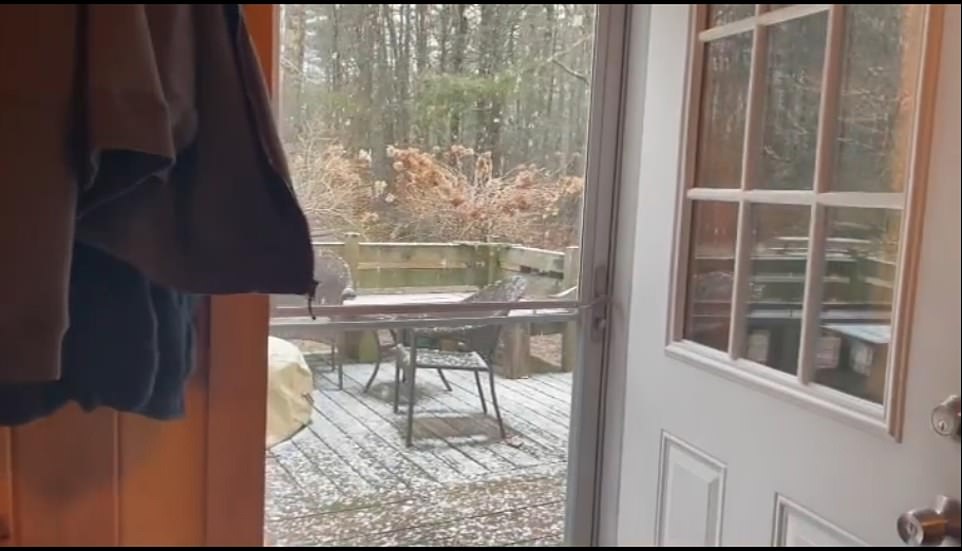 The actress began sharing pictures from her new home during the pandemic, including a shot of the snow beginning to fall in the mountains. The small home sits on 14-acres and the couple revealed they slept on a ‘mattress on the floor in the living room’ the first night they moved in 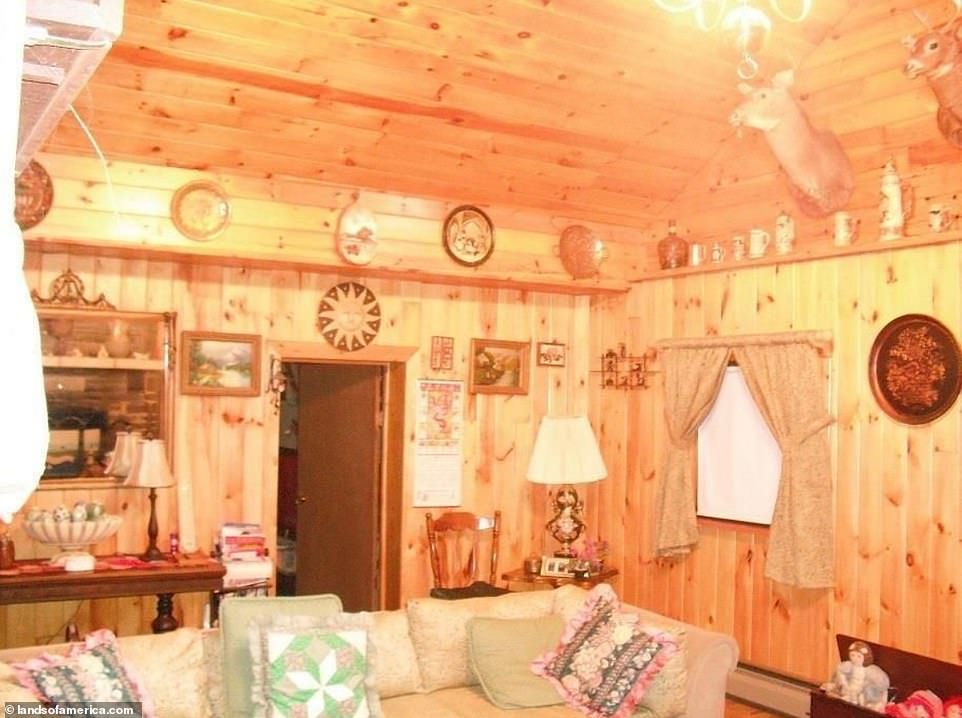 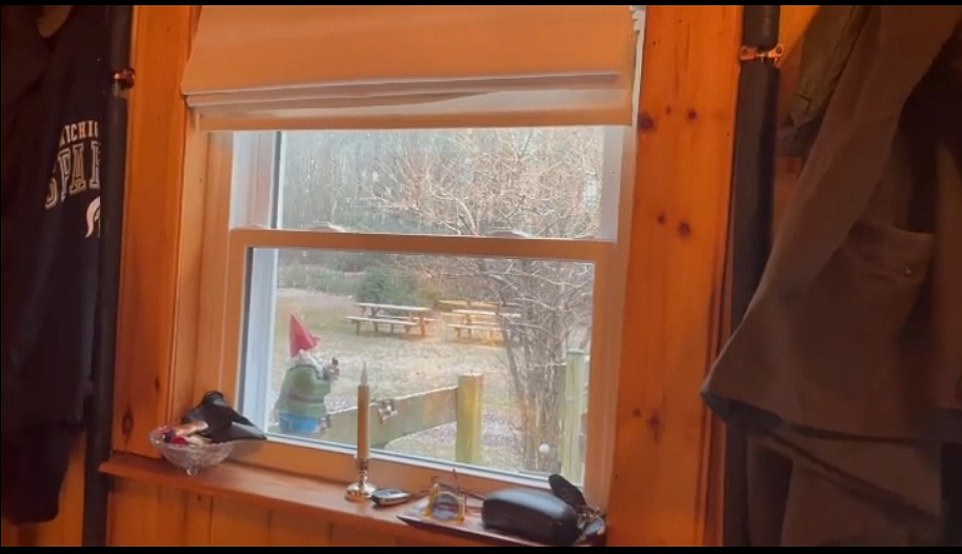 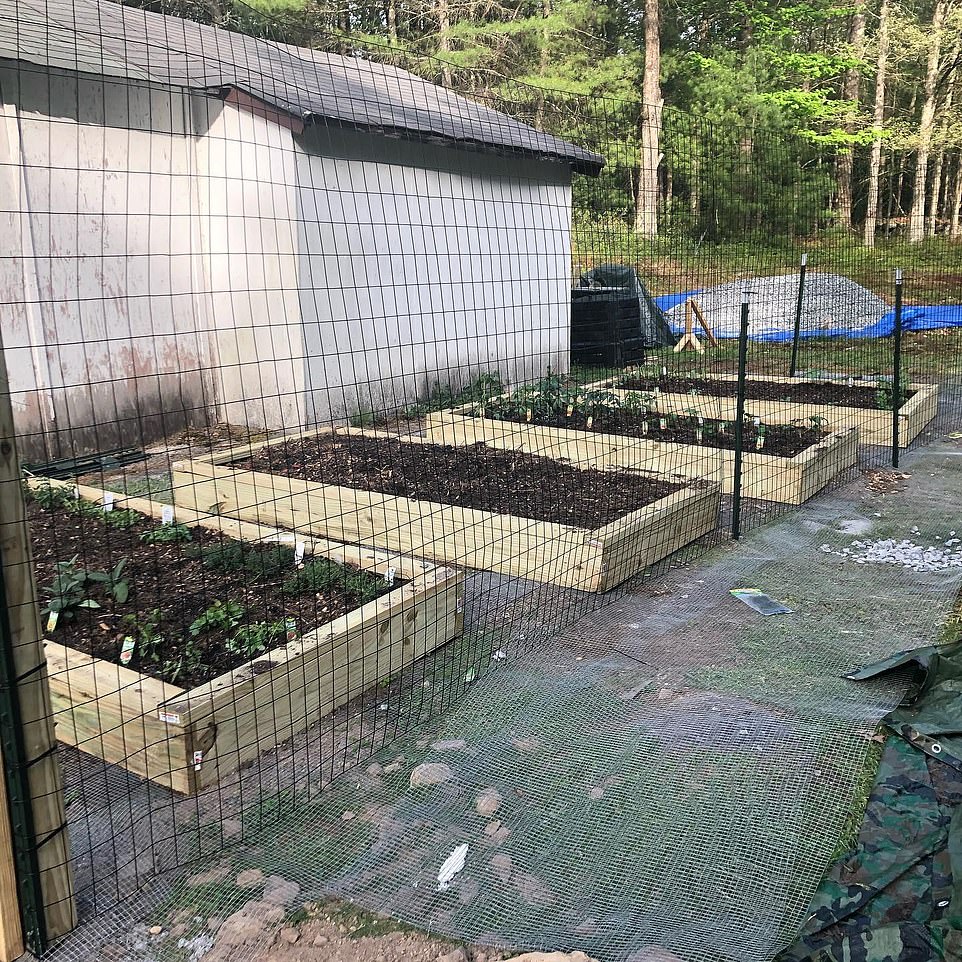 They’ve lovingly dubbed their new home ‘The Cabbage,’ and it is where she was inspired to write her new book ‘Back to the Prairie: A Home Remade. A Life Rediscovered’ during the height of the pandemic.

‘Like everyone else, as we were going through that, eating all the comfort food and making all the sourdough bread, I was posting pictures of the meals we were eating, which were very comforting and wildly unhealthy, but lots of fun!’ she told Fox News.

The actress said she was doing a segment on CBS Mornings about the move when she realized maybe she did have something to say about her new, simpler life.

‘Our lives are simple now, and there’s a sweetness to that simplicity. And with that simplicity comes a real love for stillness and living my life in a peaceful place,’ she told Fox News.

Despite growing up in sunny Los Angeles, Gilbert said she always knew at her ‘core’ that she ‘loved being in the outdoors’ and ‘around animals’ and enjoyed the ‘sweet, simple things in life.’

‘Once we got up here, once we got our land and started to look at all the things we could do with it, and then when lockdown happened, it unleashed all of this stuff inside me. There was a person who was dying to have this [new life],’ she told Fox News.

‘I still can’t believe this is what my life is like now. It’s heaven. I’m just so blessed.’

Gilbert and Busfield – who she described as her ‘blanket’ and ‘comfort place’ – got their first taste of the country life in his native Michigan, where the couple lived for five years after getting married.

They eventually relocated to Manhattan’s Upper West Side, while Gilbert was casted in play called The Dead, 1904, and her husband took on work for the NYC famous show Law & Order: SVU, but they found themselves craving the escape of the country lifestyle and fresh air and found themselves in the Catskills.

However, their dream house certainly didn’t start out as ‘heaven’ when the couple bought the property back in 2018. The fixer-upper wasn’t livable at first and required a lot of tender, love, and care from the couple to make it ‘home.’

‘This is one of those places that most people would say, ‘Are you nuts?’ if you expressed interest in buying it,’ she told The New York Times. ‘But Tim and I are the best kind of nuts. We’re hopeful visionaries.’

The small house had peeling stucco on the outside and was covered with mold and mildew and was home to a few mice, but they saw its ‘potential.’

‘[The house] had no heat, and the plumbing was kind of wonky. We had to empty all the stuff that was in the house because it was fully furnished, I mean, to the point where there was cereal in the cabinets and soap in the shower. It was like the people had just wrapped up out of the house and it sat there for decades like that,’ she told Fox News.

‘Once we cleaned all of that stuff out, we put the wood-burning stove to warm it before we put in an actual heating system. There was so much cleaning. I remember my husband with a bucket just cleaning the ceilings with hydrogen peroxide and Clorox. We scrubbed that place within an inch of its life.’ 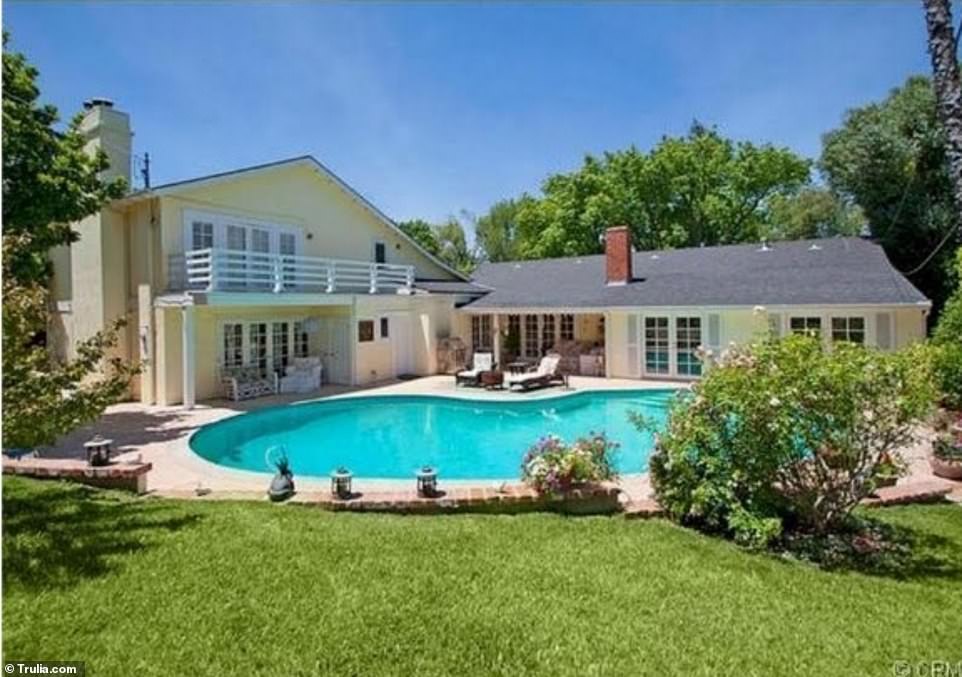 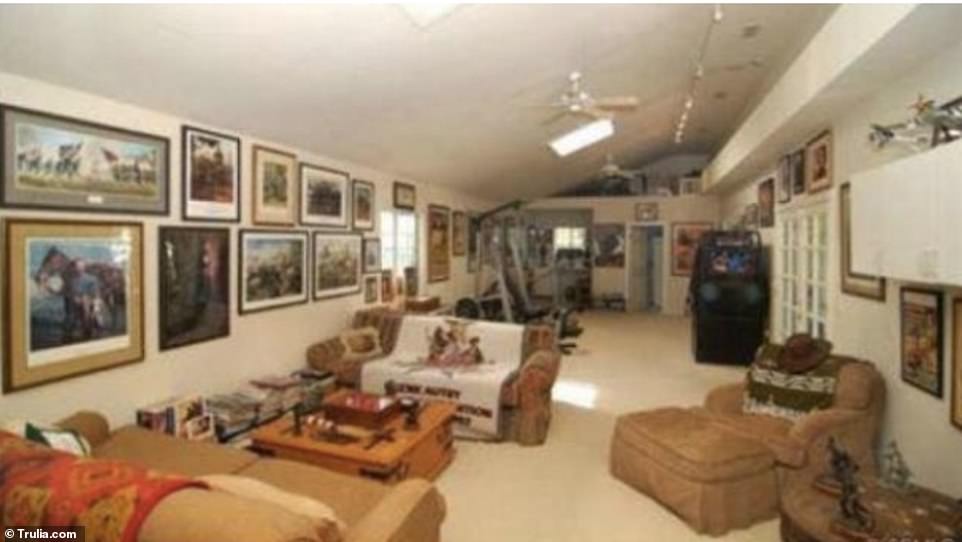 Much like their new home in the mountains, the couple enjoyed large amount of photos on the wall and comfortable furniture 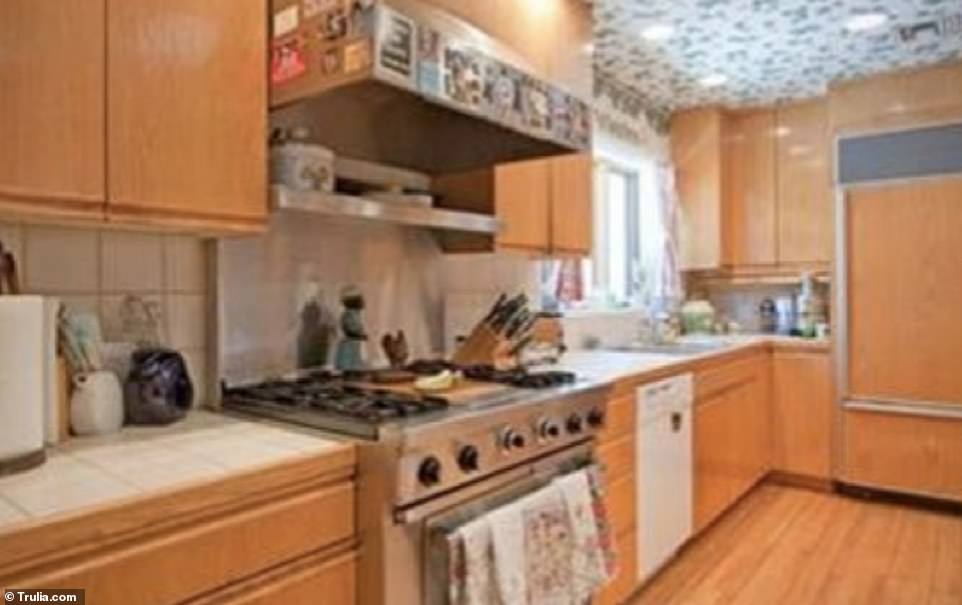 The kitchen had a more modern feel with light wood. The mountainous home features a darker, more cherry wood

Despite having a combined net worth estimated at being around $500million, the couple spent their first night living back on the prairie on a ‘mattress on the floor in the living room.’

‘We were waiting for the delivery of the fridge, the washing machine, the dishwasher and stove. I just remember thinking at that moment: “This is home. This is going to be our home.”

‘I think it was that night, that first night that we slept there, is when I realized: “Oh gosh, this is really it. And we’re going to be doing this ourselves. And it’s going to be incredible,”‘ she told Fox News.

She spent time refurnishing an old couch, which the couple bought is an ugly shade of gray and transformed into a burgundy dream. She quickly moved on to do the same for a loveseat. They built floating shelves out of recycled bowling alley wood and sprayed a piece tin roofing with vinegar to give a unique look before they mounted the piece in the kitchen and hung their collection of cast iron pans, they told The New York Times.

They decorated their home with family photos hung randomly on the wall and even a 1960s puzzle the couple did together, which they framed, and the poster of the band The Who joins the décor. 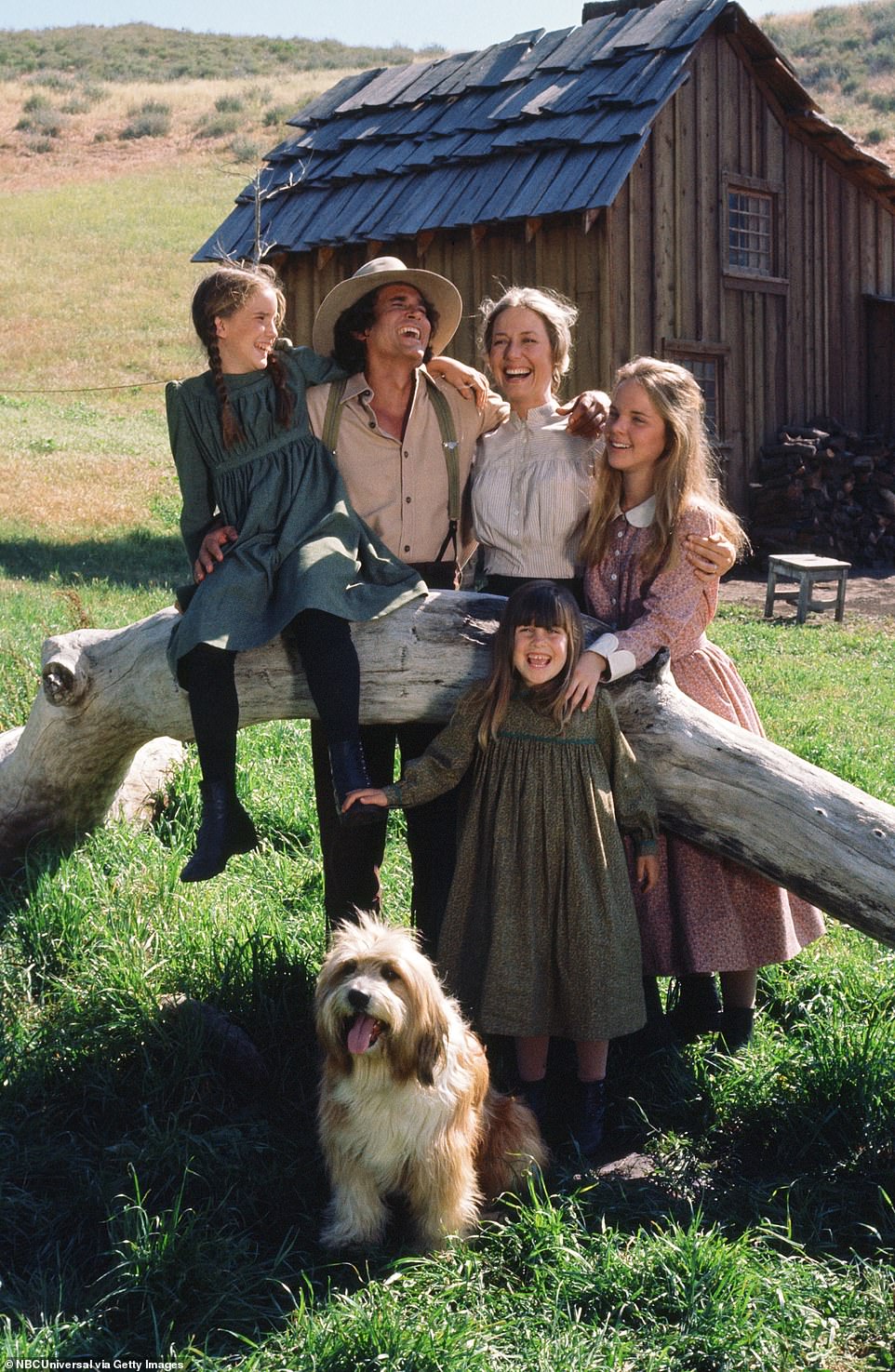 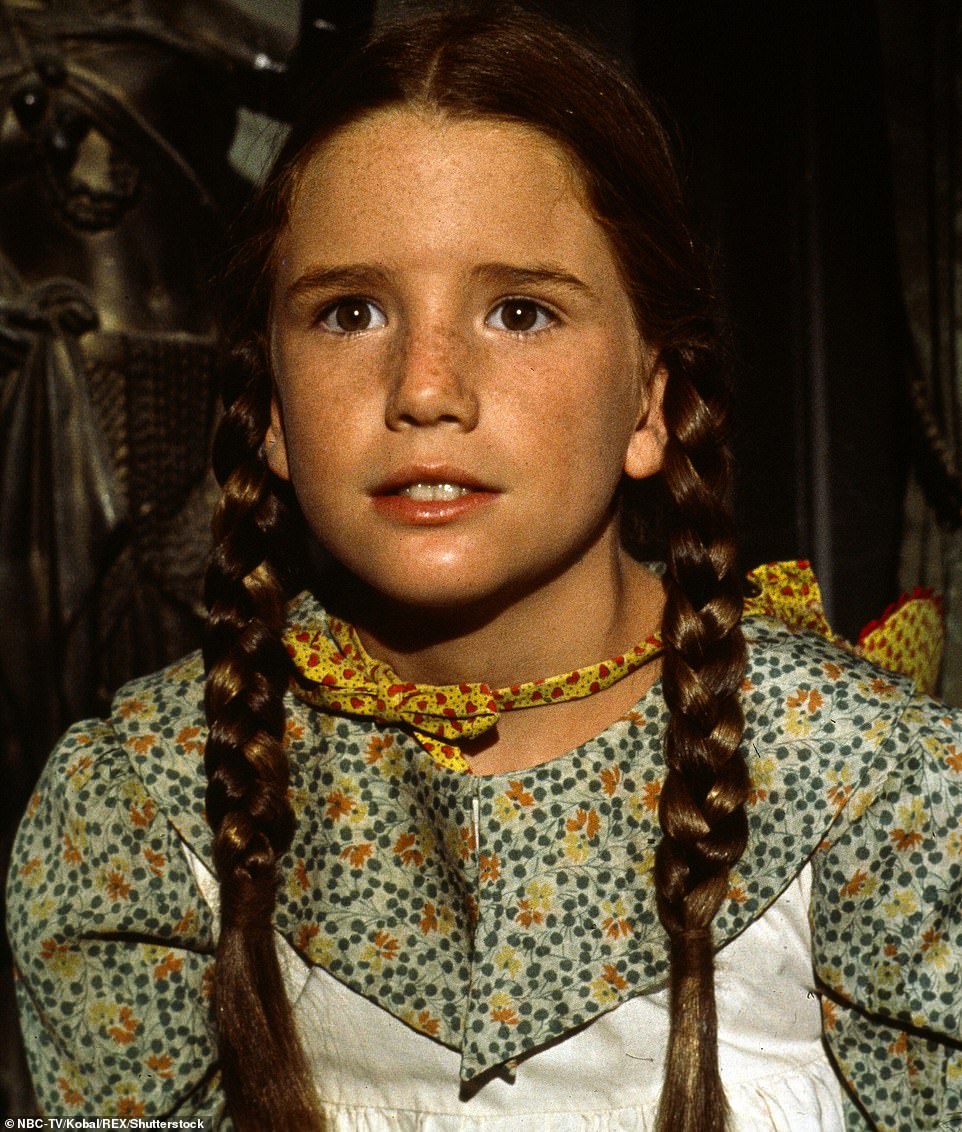 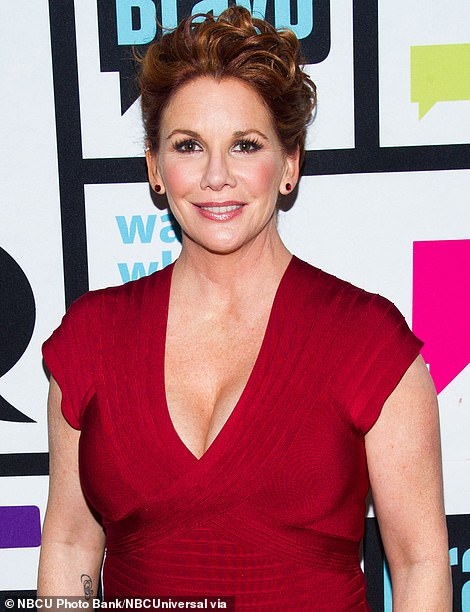 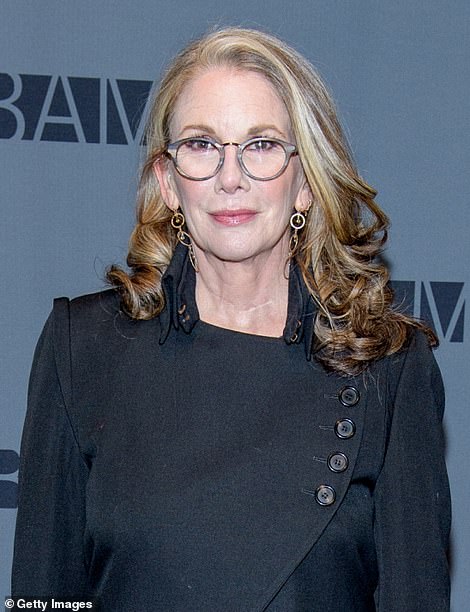 The way she was: Gilbert (pictured in 2014 and 2020) had her breast implants removed in 2015 and gave up Botox shortly thereafter. She also had three nose jobs by the age of 20, making her nose thinner after makeup artist continued to contour

‘The room was designed with Pete Townshend in mind,’ Busfield told The New York Times. ‘We keep hoping he’ll come by one day and hang out.’

Now the actress spends her days cleaning out the chicken coop, building window boxes with her husband until dinnertime, and tending to her garden, where she grows strawberries.

She’s relearning her love for the outdoors, which she briefly got to experience on the Little House set as a child and said there is ‘something about the outdoors that still calls me.’

‘It always felt like a big adventure, to be in the outdoors and play while working. I just loved the feeling it gave me,’ she told Fox News. ‘There were other kids to play with and lots of games we could do. They always had a lot of activities for us on set. And there were animals everywhere.

‘[Now], planting my garden, watching over my chickens and just feeling the dirt and nurturing our food that grows each day from the ground – it’s satisfying. It awakened my soul in a way that I’ve never felt before.’

The star said she certainly does not ‘miss Hollywood,’ but does miss her friends and family that still reside in LA.

Australia’s gambling problem prompts calls for pokies to be banned

The dark side of gambling in Australia has been thrown back into the spotlight as many call for pokies to be removed from pubs and clubs.Michael Miller, the Australian correspondent for the Washington…
END_OF_DOCUMENT_TOKEN_TO_BE_REPLACED
Category Hot NewsPosted on 06.10.2021