Liz Truss last night pledged to get more civil servants back to the office after it emerged many Whitehall desks are still empty.

She backed Cabinet Office minister Jacob Rees-Mogg’s efforts to curb the work from home culture in the civil service.

The Foreign Secretary, who has previously suggested flexible working should ‘become the norm’, made the vow as Cabinet Office figures showed that in the week commencing July 25, just over half of Whitehall desks were occupied.

The worst culprits were the Scotland Office on 27 per cent and Miss Truss’s own department on 34 per cent. Numbers are falling as the weeks go on.

Miss Truss said: ‘I support the work Jacob Rees-Mogg has been doing… and I will be looking at that very carefully.’

The Cabinet Office said workplace attendance will be lower in summer due to annual leave. 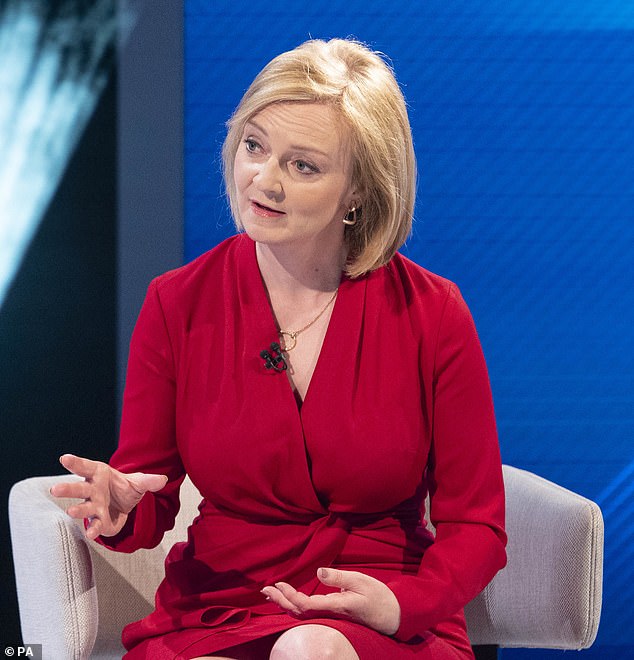 The Home Office, which was more than half full earlier in July, fell to 43 per cent by the end of the month, while the Department for Work and Pensions fell eight points to 44 per cent.

The proportion of staff working in-person at the Cabinet Office – where Mr Rees-Mogg has been leading the calls to return to the office – fell by 16 points to 55 per cent.

Miss Truss’ own department saw a minor uptick from the previous week commencing July 18, but fell from 38 per cent at the beginning of July.

Challenged on how her department has had among the worst desk occupancy rates in Whitehall, the Foreign Secretary said: ‘The thing about the Foreign Office is obviously quite a lot of our people are travelling so it’s quite hard to measure, but I would say that including the Foreign Office, we do need more people to come into work.’

She added: ‘We need more people to work in the office, I think that’s very important.’

Miss Truss, then the equalities minister, has previously said that the expansion of remote working would allow people outside cities to take up senior jobs.

‘It’s about bringing opportunity to those areas.’ Ministers have said civil servants should avoid remote working to increase productivity and clear pandemic-era backlogs.

A Cabinet Office spokesman said: ‘We have been consistently clear that we want to see office attendance across the civil service consistently back at pre-pandemic levels.

‘As you would expect, workplace attendance will be lower in summer as staff take annual leave and with the impact of recent rail strikes, but this has not prevented civil servants from delivering vital public services.

Boy, 14, is knifed ‘while sitting an EXAM’ in front of classmates – as 13-year-old pupil is arrested

Wartime station built to look out for Nazis will become dream eco-home after it sells for £795,000