They did WHAT? Outrage after a giant electricity pole is installed in the MIDDLE of a busy pathway – but there’s a reason for the bizarre decision

A local council has stunned residents by installing an electricity pole in the middle of a shared pathway.

The stobie pole was built by the Little Parra River in Bolivar, northern Adelaide, three months ago.

The pole was brought to the attention of Deputy Mayor of Salisbury, Chad Buchanan, by a concerned local cyclist on Friday. 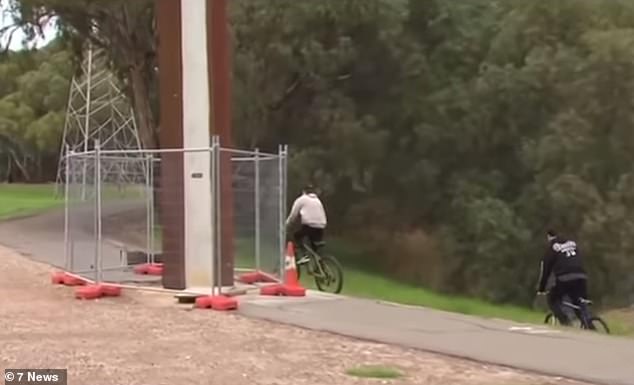 The stobie pole (pictured), which popped up right in the middle of a shared pathway along the Little Parra River in Bolivar, a northern suburb of Adelaide, has been there for about three months

The concerned resident, Tom Colls, said cyclists have to divert either onto gravel or down a riverbank to go around the pole.

‘With longer dark hours in the winter, it can pose a risk to early morning and later cycling commuters that don’t have expensive high-lumens forward lighting,’ Mr Colls told ABC News.

In a Facebook post on Sunday, Deputy Mayor Chad Buchanan said: ‘I thought I’ve seen it all.’

‘I have asked staff to find out why South Australia’s Power Networks (SAPN) have done this, and if they plan on building a new path.’

‘It was certainly perplexing when I saw the picture…I had to come out and see it for myself to believe it,’ Mr Buchanan told 7News Adelaide.

But South Australia’s Power Networks corporate affairs manager Paul Roberts explained the pole had to be positioned in the middle of the path. 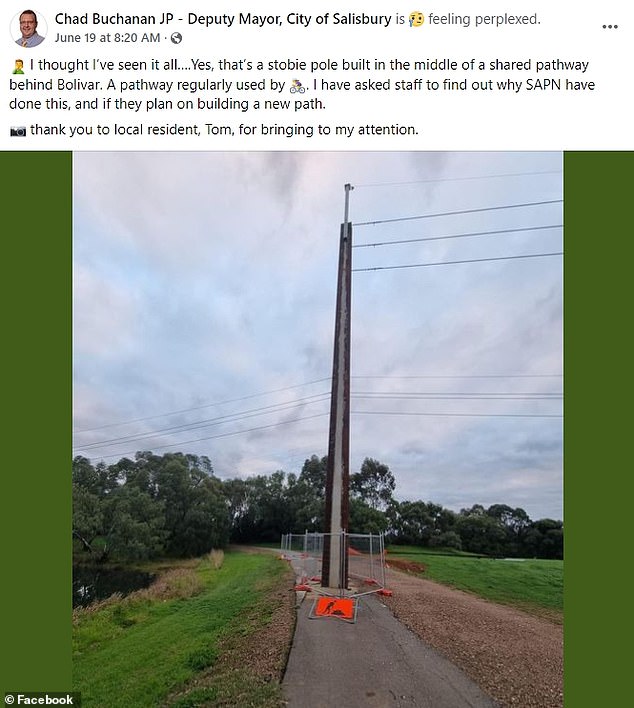 Deputy Mayor of Salisbury, Chad Buchanan, used Facebook on Sunday to express his confusion about the electricity pole (pictured)

This is because there was a wetland on one side and moving it the other direction would have required trimming a tree, which the company did not wish to do.

There is a second power pole further along next to the path instead of in the middle, but it has a fence around it that also blocks the path.

A development application approved by former planning minister Vickie Chapman a year ago, stated the power lines are being built to connect to a new gas and diesel power station at the nearby Bolivar Wastewater Treatment Plant.

One of the conditions of the approval was all infrastructure damaged during the development be repaired at SA Power Networks’ cost.

Mr Buchanan said that he had been ‘advised that the relevant authorities will be building a new path [around the pole this week].’ 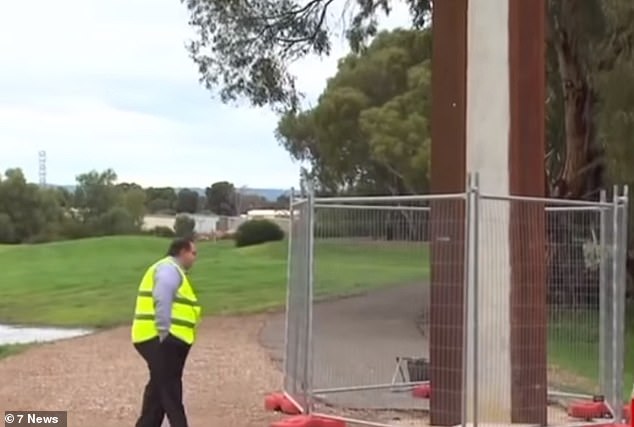 Mr Buchanan (pictured) said: ‘It was certainly perplexing when I saw the picture…I had to come out and see it for myself to believe it’

Snake knocks on door of home in Sunshine Coast