Newsagency owners embroiled in a $63million Powerball court battle could be forced to shut their store as the ‘heart and soul of our family’ is almost hospitalised with a serious health condition.

Kevin and Tania Parkes, who own City News Kalgoorlie in regional Western Australia, were ecstatic when their ‘pay off your mortgage’ syndicate won half the $120million jackpot on February 24.

Each of the 250 participants walked away with $261,986, with the couple taking home double the amount because they bought into the syndicate separately.

But their joy turned to fury when a former government worker, known as Mr Ing, claimed he was part of the winning syndicate and entitled to a stake of the multi million-dollar prize pool – which the Parkes insist is not true.

They will fight Mr Ing for the cash in the Supreme Court on August 2.

As the crunch civil case looms, Mrs Parkes opened up on Saturday about her husband’s battle as a leg amputee with high blood pressure. 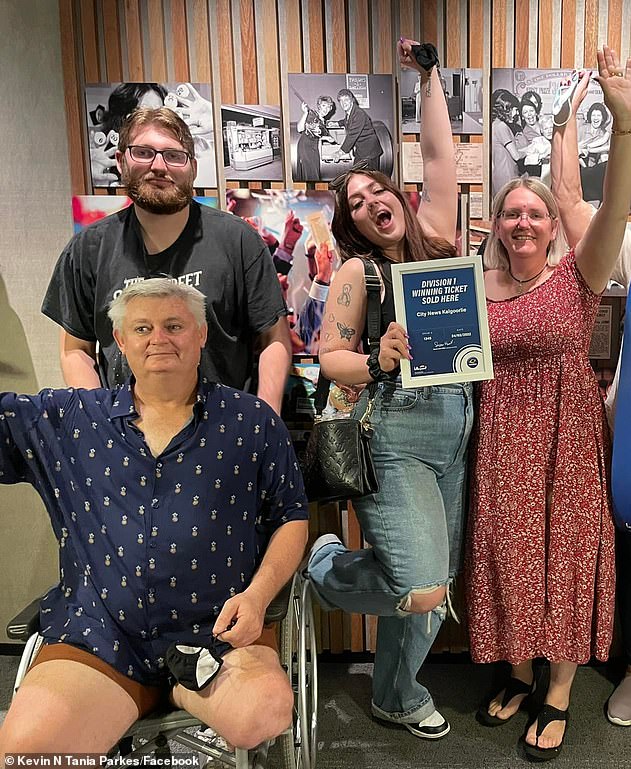 On Sunday, Tania Parkes told her customers about her husband’s health battle on social media (pictured)

‘Unfortunately, we have been placed under a lot of stress over the last few months with issues we can’t discuss and I need to make Kevin’s health a priority at the moment,’ she wrote on her business’ Facebook page.

‘He has dangerously high blood pressure which is boarding on hospitalisation but they were able to get under control last night. He is resting up today.’

The couple announced in late-May that they sold their business and planned to hand it over to the new owners in January.

‘It is pushing us to the point of probably having to close our heart and soul our beloved shop for good very very soon,’ the mother-of-two continued.

‘We will update after a serious sit down over the weekend to see what happens next.’ 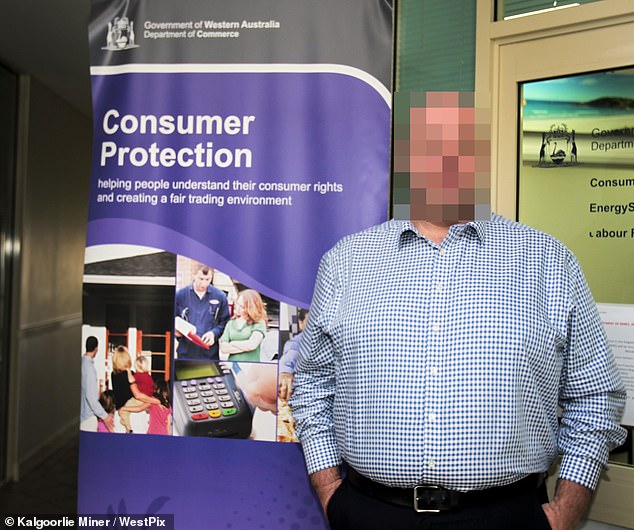 Mr Ing buys a ticket in one of the syndicates.

February 24: Powerball is drawn and Syndicate #2 wins half the division 1 prize – $63million. The money will be split between 250 people who subscribed to the syndicate.

February 28: Lotterywest asks most of the syndicate subscribers, including Mr and Mrs Parkes, for their individually numbered tickets to prove they bought the winning ticket.

Mr Ing attends a Lotterywest office and alleged he bought a Syndicate #2 ticket.

The Parkes could not find records stating Mr Ing bought a ticket in Syndicate #2, but Mr Ing continues to claim he did.

April 14: Despite a formal dispute over the winnings, Lotterywest told the Parkes that it intended to disburse the winnings to Mr Ing.

The Supreme Court barred the payment from being made.

May 23: Kevin and Tanya Parkes buy a $3.2million mansion

The case will return to court on August 2.

‘Happy, happy, happy birthday to this absolute legend – the heart and soul of our family,’ his wife wrote on social media.

‘Chin up my rock, we got this. This is Just gonna make us stronger and more determined to kick ass.

‘May you have the best birthday, and just think of the 50th we get to throw in two years in our paradise ,’ she added, referring to the $3.2million mansion they bought with their winnings in May.

The palatial home, in the southern suburbs of Perth, sits on a six-acre block and has five bedrooms, a football field, horse stables, a basketball court, four resort-style bathrooms, theatre room with built-in sub-woofer, and electric curtains.

Outside boasts horse stables, a football field, a lit basketball court, a ‘Bali-style’ swimming pool, and enough parking for 23 cars. 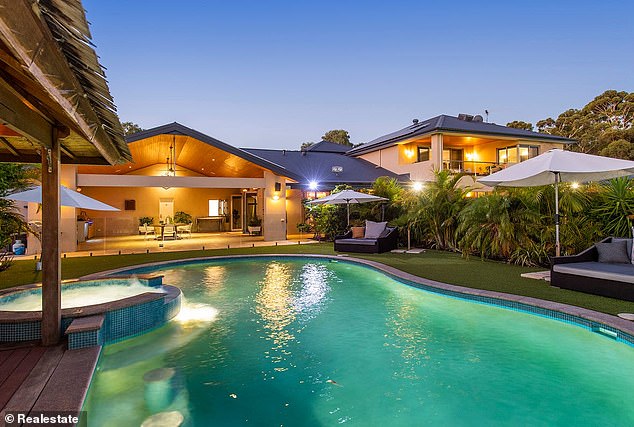 The Parkes bought a $3.2 million house in Perth (pictured) in May. They sold their businesses and will move in January 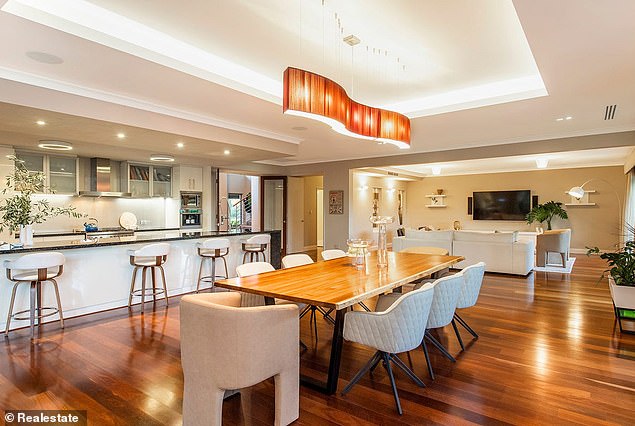 The Parkes’ new home has an open-plan living and dining area, an atrium-style entrance, and enough parking for 23 cars

Their lotto win turned sour when Mr Ing turned up at a Lotterywest office in March claiming he was part of the winning syndicate.

According to documents filed in the Supreme Court of Western Australia in April, the Parkes checked their records and allege that Mr Ing bought into the unsuccessful #1 Syndicate – before subscriptions to the winning syndicate opened.

Speaking through his solicitor Cally Hannah in May, Mr Ing gave his side of the story.

‘He handed a winning ticket to Lotterywest on February 28.’

Lotterywest paid the winnings to all #2 Syndicate subscribers on March 11, with the exception of Mr Ing.

Pictured: Tania and Kevin Parkes with their children. The family won a portion of a $120million Powerball jackpot in February

Despite a formal dispute over the winnings, Lotto officials told the couple they intended to pay the man.

The payout has since been blocked by the Supreme Court.

Four days after their winnings numbers were called, the couple wrote on Facebook: ‘Still absolutely buzzing. Thanks for an unbelievable unforgettable night guys.’

‘Wish we could have partied with all 250. Although feels like we did. Maybe a few sore heads in the morning.

A Lotto syndicate works by offering tickets to individual subscribers. In this case, tickets were $100 each.

The money is pooled and operators use the funds to buy lottery tickets.

If the syndicate lottery ticket wins a prize, the prize is divided equally between the subscribers.

In this particular instance, when a syndicate ticket is sold, an individually-numbered copy of the ticket is generated by the Lotterywest equipment at the newsagency.

That ticket is either collected by the subscriber, or held by the newsagency – pending collection.

City News in Kalgoorlie allows subscribers to purchase syndicate tickets over the phone.

The agency keeps the ticket in a folder created for the subscriber.