A message in a bottle thrown out to sea by six-year-old Alex Melling and his mother has come back home – 24 years later.

Mr Melling, 30, who lives in Hindley, Wigan said he was scrolling on Facebook Group Hindley Residents when a mention of his old childhood address caught his eye.

He scrolled back up and then saw his name mentioned in a post that he ‘Just could not quite believe.’ 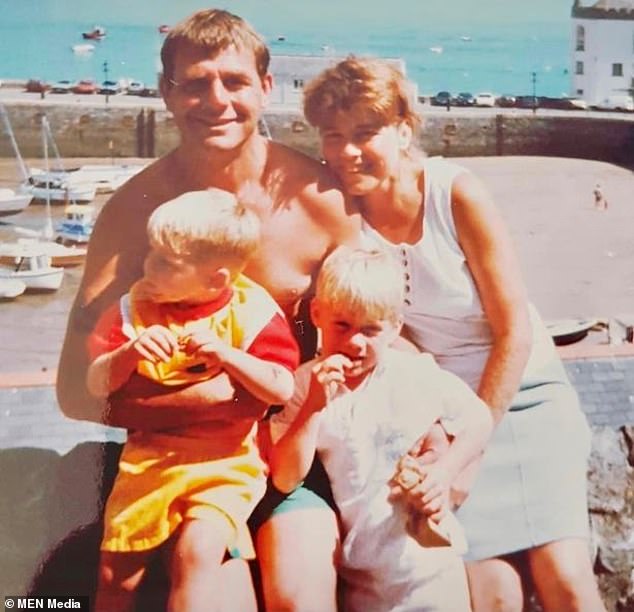 Alex Melling, pictured with his brother Freddie and parents Graham and Valerie, noticed a post of Facebook which had his childhood address attached to it. The post referred to a message in a bottle thrown into the sea by Mrs Melling 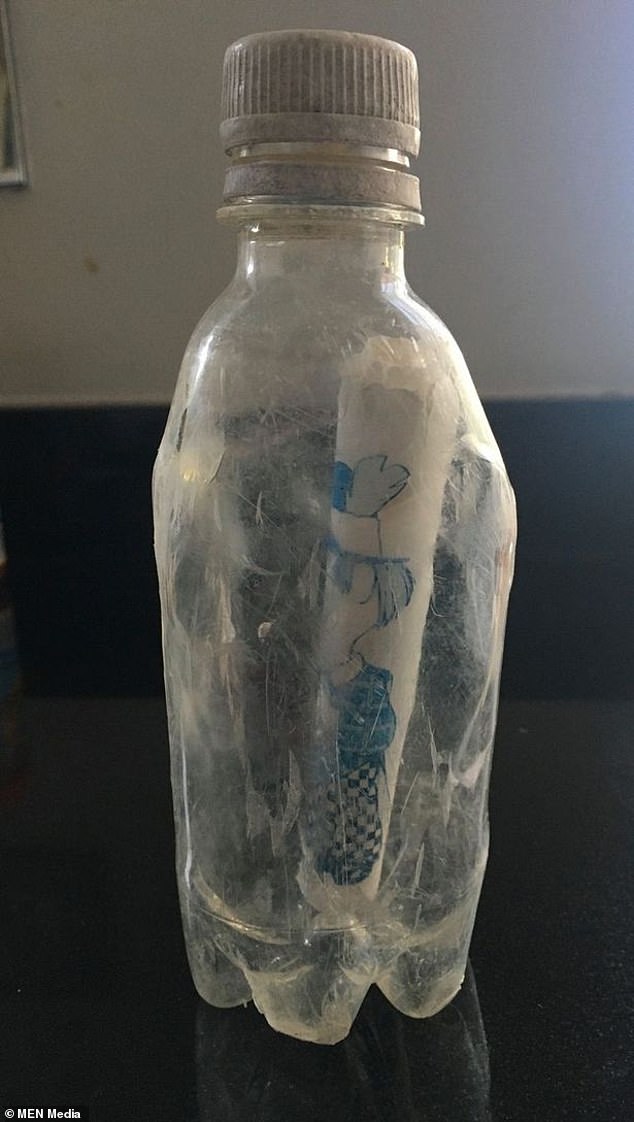 The bottle, pictured here, was recovered from a remote beach on the West Coast of Scotland by Rex Winter’s family, who vowed to track down ‘Alex’ 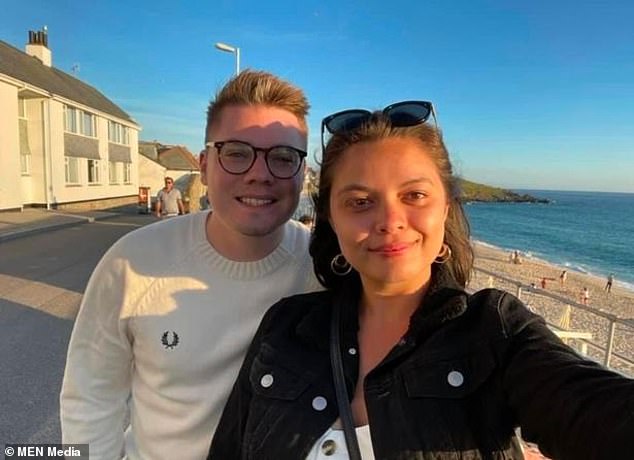 Alex Melling, pictured here with his girlfriend Victoria, said recovering the message was highly emotional as it had been written by his mother Valerie, who died of cancer when he was a teenager

His mother, Valerie, who died of cancer when Mr Melling was just aged 17, wrote the note mentioning her son and then tossed it into the sea.

The message, which was thrown into the water around 1997 when Mr Melling was aged around six, has now been discovered on a remote Scottish beach by Rex Winter and his family.

Mr Winter posted details of the find on Facebook and was able to get in contact with Mr Melling.

As well as sending Mr Melling the message in the bottle – with the highly sentimental note – Mr Winter also posted a bottle of Jack Daniels.

He said his grandmother got ‘very emotional’ reading the message and seeing her late daughter’s handwriting.

He said: ‘I have a vague memory of it happening.

‘Although I don’t know where we were at the time. Reading my mum’s note was really nice as it was her handwriting and her words.

‘My brother Daniel was buzzing and my grandma was really emotional. I will be keeping the bottle forever now with some other keepsakes. I can’t quite believe it.’

Rex Winter said his son and daughter discovered the message in a bottle in a remote bay in the West of Scotland.

He wrote on Facebook: ‘This summer my kids found a message in a bottle on a remote beach in the west of Scotland. It seemed to be old, and the message inside appeared to have been written by a child.

‘The message inside was from somebody called Alex, (no surname given) who gave an address in Hindley

‘There was no other information, date or otherwise.

‘My daughter wrote to Alex at that address some time ago but has had no reply.

‘He/she may well have moved and/or the house is now unoccupied.

‘I don’t know if the bottle is 5 years old or 30 years old, but I’m sure that Alex would be interested to learn where it ended-up!

‘Is Alex reading this? Or does anybody know who Alex might be?’

Mr Melling, who had lived at that address as a child but had moved when he was aged 12, responded via Facebook.

He spoke to Rex’s daughter Izzy, 17, who had found the bottle while on holiday along with brother Freddie, 22 and their friends Liam Kelly, 22 and Cat Jones, 19.

Izzy, who lives in Newcastle, said: ‘We were camping in Scotland and had taken a boat out in Garlieston, around Wigton Bay.

‘We anchored the boat and went to explore in the caves.

‘Freddie found the bottle washed up and we could see a message in it.’

‘The message was written on the back of a child’s birthday party invitation and read: ‘If found please return to [address], Hindley. Thank You. Please address to Alex.’

Izzy says they wrote to the address but when they received no response, their dad Rex, a solicitor, 62, decided to try and find Alex on Facebook.

Izzy says: ‘My dad got really into it.

‘He found a Facebook group called Hindley Residents and posted up that we were looking for Alex with a picture of the bottle.’

Schoolgirl Izzy says they were all excited when Alex got in touch and they posted the bottle back to him.

She says: ‘I was doing my homework and I got a message from my dad saying: “I found him.”

‘I was so excited. I messaged Freddie, Liam and Cat and we couldn’t believe it.