A man accused of fatally shooting rapper Young Dolph is a convicted rapist who released a music video the day before his arrest which saw him sing about opening fire on his enemies.

Justin Johnson – who performs under the moniker Straight Drop – released a song Monday called ‘Track Hawk’ that includes lyrics such as ’50 shots in 20 seconds.’

Holding a stack of $100 bills and rapping in front of a gas station, he says: ‘The only time he see my face when I’ma blam him.’

Other lyrics in the largely hard-to-decipher video include ‘dead on fire,’ ‘killing sh**’ and ‘I can’t let no man get on me, they’re too close to dyin’.’

The video premiered shortly before Johnson, 23, was arrested alongside Cornelius Smith, 32, and charged with first-degree murder in connect with Dolph’s death. He announced plans to hand himself in on social media around the same time the violent song was released, sparking claims he was seeking publicity. Johnson and Smith were also charged with criminal attempted first-degree murder and theft of property.

More details about Johnson’s violent past also emerged Wednesday, when Shelby County District Attorney General Amy Weirich said he was charged with raping and robbing a woman at gunpoint seven years ago. 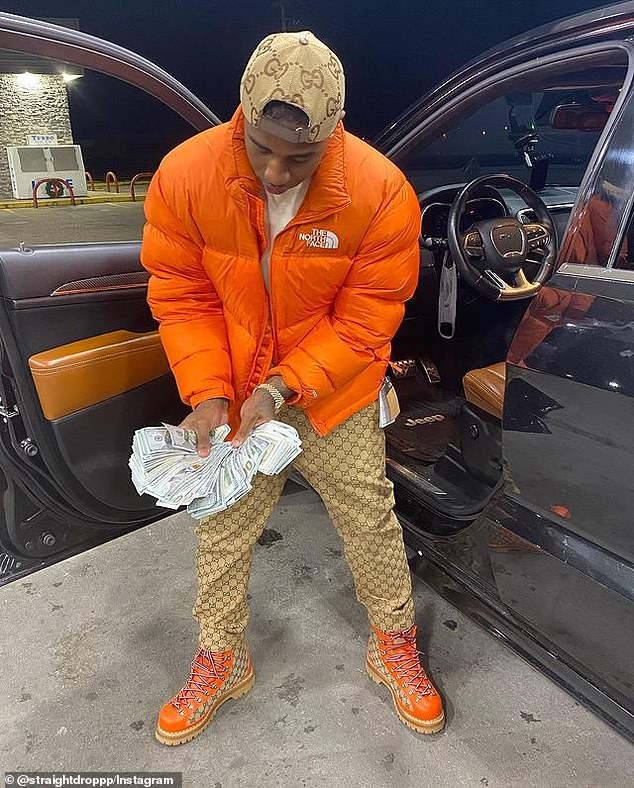 In July 2015, Johnson at age 17 was charged with aggravated rape and aggravated robbery at gunpoint for assaulting a woman at an Econo Lodge, Weirich told reporters.

He was found delinquent – equivalent to a conviction – and placed in the custody of the Department of Children’s Services until his 19th birthday; she said the DA’s office filed a transfer request but it was denied.

Johnson was then placed on the juvenile sex offender registry. 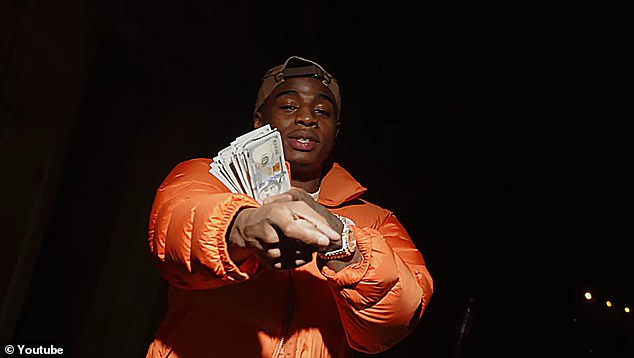 More details about Johnson’s violent past also emerged Wednesday,  it was revealed he raped and robbed a woman at gunpoint in 2015, when he was 17 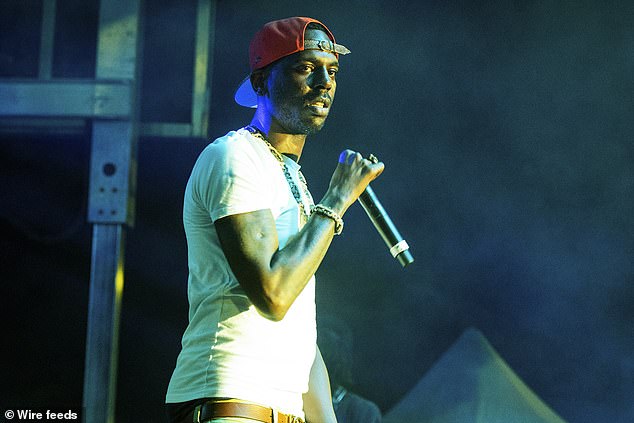 Johnson was arrested for Dolph’s (pictured) murder on Tuesday, but police have not yet revealed a motive for the brazen daylight killing

Dolph, 36 – real name Adolph Robert Thornton – was shot and killed as he shopped inside a cookie store in Memphis last November 17.

Police have not yet revealed a motive for the brazen daylight killing.

It’s not the first time Johnson has shared songs rife with violent material.

About two weeks ago, he posted a video of himself flailing a gun and rapping: ‘pull out my gun, you better act accordingly.

In 2017, Johnson, was sentenced to five years in prison after shooting three people with an assault rifle during a brawl at a Memphis bowling alley. 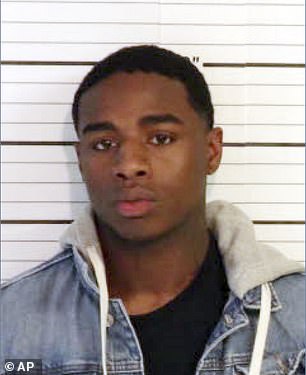 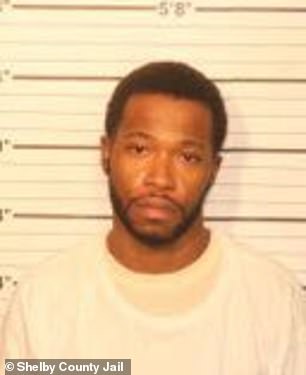 Justin Johnson, 23, and Cornelius Smith, 32, have been arrested and charged with first degree murder and other charges in connection to Young Dolph’s killing 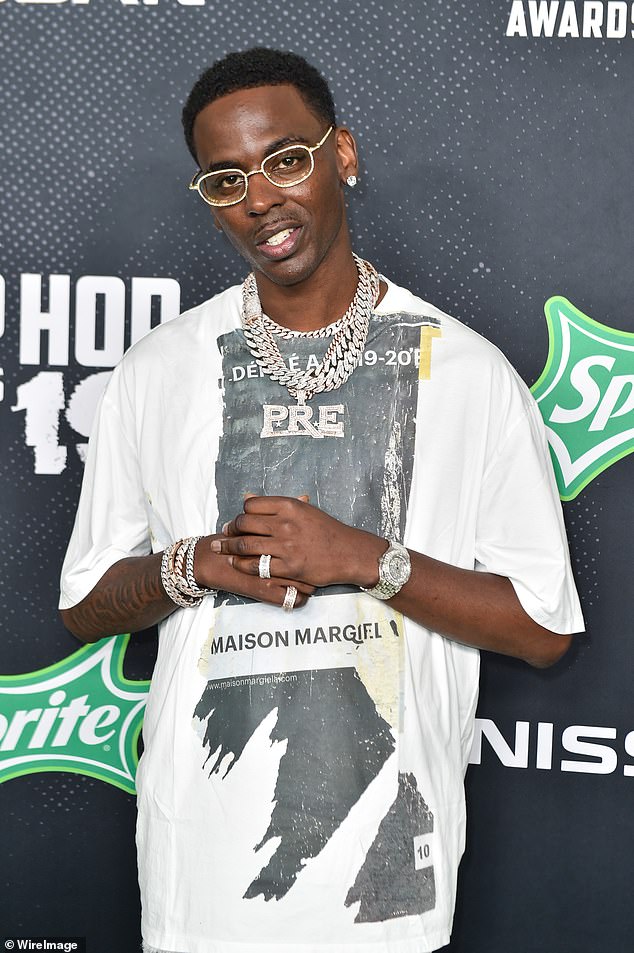 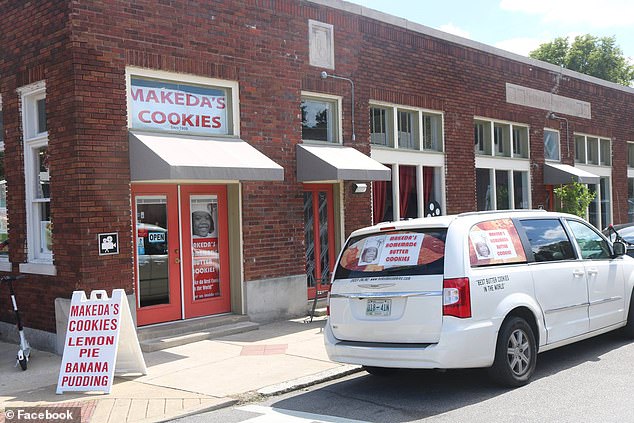 He was ambushed as he shopped inside of Makeda’s Butter Cookies, with the store owner saying that a car pulled up and fired through the window 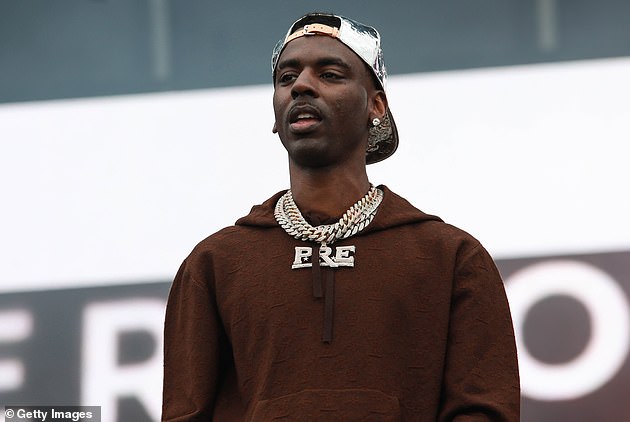 Dolph, who is from Memphis, had three albums reach the top 10 on the Billboard 200. Above, Dolph performing at Rolling Loud in New York City on October 30

US Marshal Tyreece Miller said during a press conference that they received more than 500 tips after announcing a reward for Johnson. The search brought them to numerous cities, including Houston, Atlanta, Indianapolis, Dallas, and Hampton, Virginia.

They received a tip Johnson was travelling on Highway 42 in Indiana and arrested him at a truck stop near Terraho.

Shondale Barnett, 27, was also nabbed at the scene and faces an accessory after the fact of first degree murder charge. Police believe he heled Johnson hide out since the search for him began.

The owner of Makeda’s Butter Cookies in Memphis, Maurice Hill, told WHBQ that Dolph had walked into the store to buy cookies on November 17 when a vehicle pulled up and fired through the window, striking him.

Fans lined up outside the store recording videos of the taped-off crime scene, sharing their disbelief that the local rapper had been gunned down.

The shooting came one week after Dolph was recorded outside the cookie shop promoting the chocolate chip cookies in a video posted to social media.

‘All I came for is to get some Makeda’s,’ he said in the post.

Last week, authorities released a $15,000 reward for anyone with information that would lead to Johnson, along with a warrant for his arrest.

Johnson was arrested Tuesday in Indiana at around 3pm, US Marshals said, according to WHBQ in Memphis. It is unclear where he was found or where he is being held as of Wednesday morning. 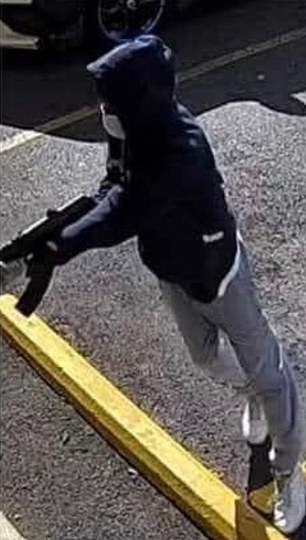 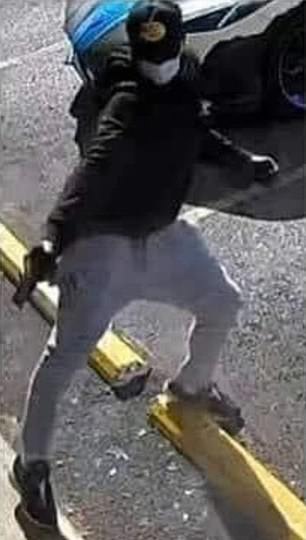 In the surveillance photos above, two men aim weapons at an unseen target outside the Memphis cookie shop in November

An 18-year-old Johnson was sentenced to five years in prison for a triple shooting at Billy Hardwick’s All Star Lanes in Memphis in January 2017.

Police said that a fight broke out at the bowling alley just before midnight, according to Tennessee station WJHL. Johnson grabbed an assault rifle from outside and fired into a crowd, hitting three people and escaping with his girlfriend.

Officers found him a month later in a home with marijuana, an assault rifle and active warrants for the January shooting. He was listed as a gang member.

In May 2017, Johnson pled guilty to several charges of aggravated assault, but served only five months of a five-year sentence when a judge approved his release.

Johnson also faced drug and weapons charges in 2018 after he drove a Dodge Charger into a gated apartment complex in Memphis and refused to leave, but they were dropped.

On Saturday, the rapper posted on his Instagram Stories that he was turning himself in on Monday, which he didn’t do. He was arrested in Indiana on Tuesday. 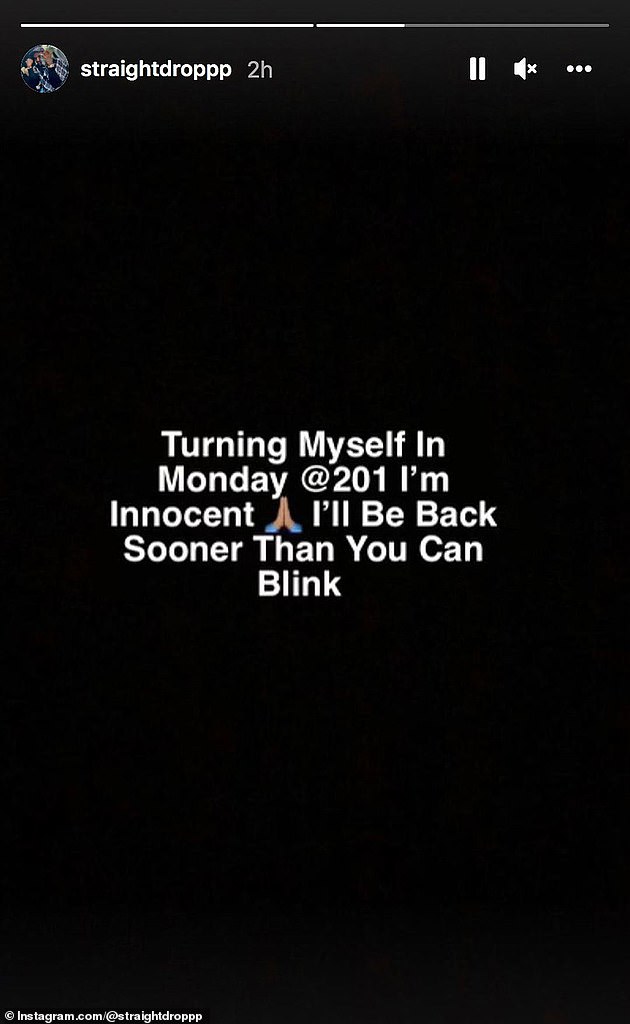 Johnson said on Instagram on Saturday that he would turn himself in on Monday, but he never did 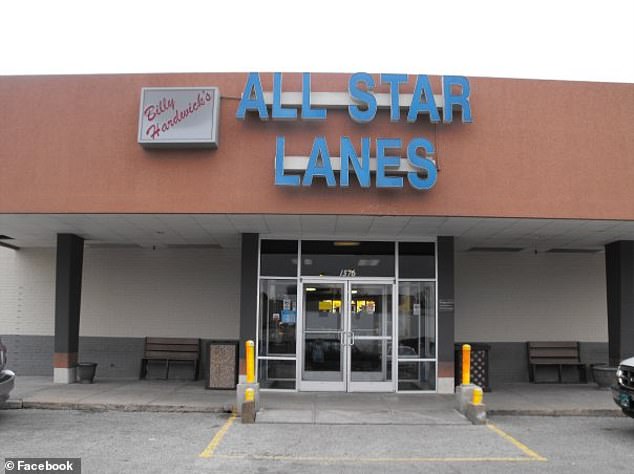 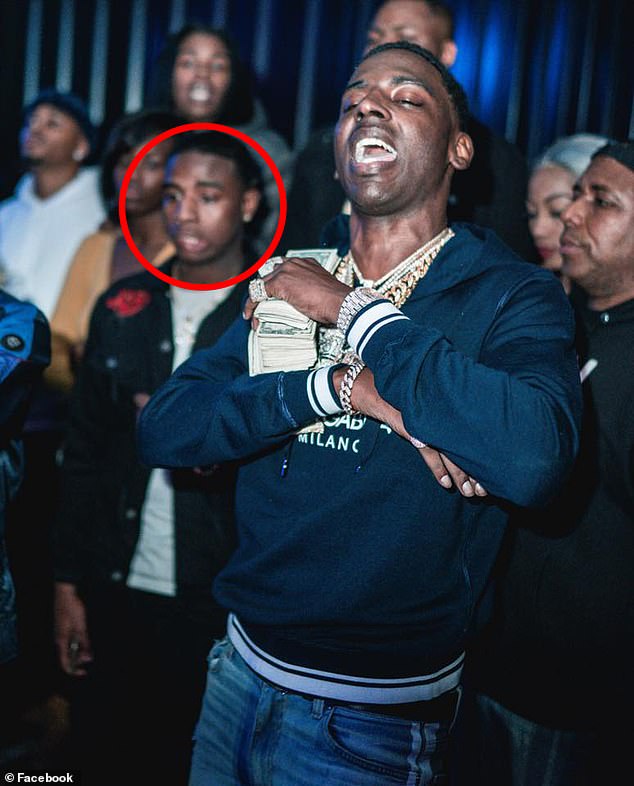 Photos have surfaced on social media of Johnson appearing at a club with Dolph and wearing a PRE chain, supposedly referencing Dolph’s record label Paper Route Empire, according to XXL magazine.

On his now-inactive Instagram page, Johnson goes by the name Straight Droppp and is seen posing with wads of cash in designer clothes or next to a Rolls Royce.

Two weeks before the shooting, Johnson posted a photo of himself in Von Dutch clothes, captioned: ‘I’m That N**** That You Never see & Hear About The Most Active In Streets.’

One woman replied: ‘Boy u about to go to jail.’

Another said: ‘Bruuuu! Your face just hit the news. Even tho we been knew.’

Smith, 32, was charged with the same charges as Johnson, along with an extra property theft charge and charges of unlawful carrying or possession of a weapon and employing a firearm with intent to commit a felony.

He was first apprehended on December 9 in Southaven, Tennessee on a car theft warrant for the white Mercedes Benz used in Young Dolph’s murder, according to Shelby County District Attorney Weirich. 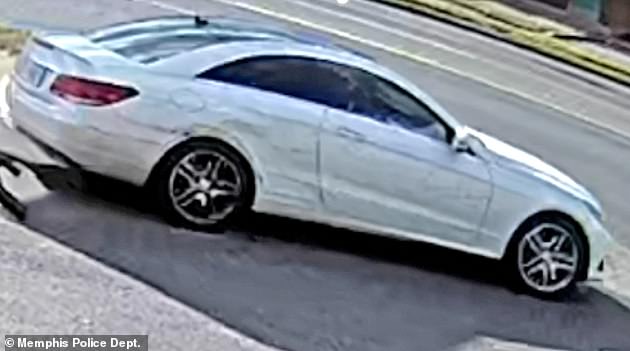 Cornelius Smith, 32, was first arrested back in December on a property theft charge for stealing the Mercedes used in Young Dolph’s death. He faces more charges than Johnson

The car was allegedly stolen in a carjacking on November 10, a week before Dolph’s murder. Police found the car on November 20, just three days after the killing.

He was arrested for property crime and extradited to Shelby County Jail on Tuesday, according to WHBQ.

As of Wendesday morning, he is being held without bail in Shelby County Jail.

Known for his depictions of tough street life and his independent approach to the music business, Young Dolph was admired for charitable works in Memphis.

He organized Thanksgiving food giveaways, donated thousands of dollars to high schools, and paid rent and covered funeral costs for people in the Castalia Heights neighborhood where he was raised. 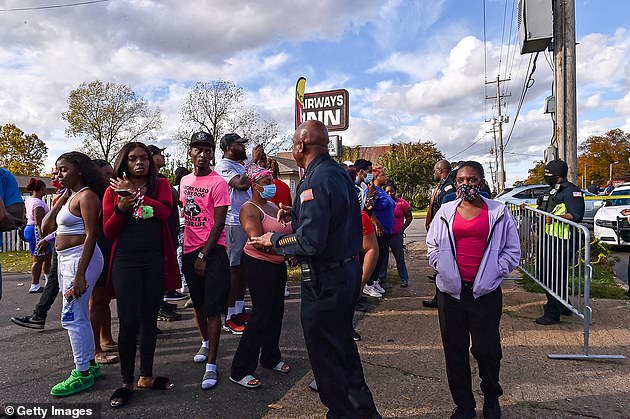 City officials and community activists pointed to the killing as a symbol of the dangers of gun violence in Memphis, where more than 300 homicides were reported last year.

A private funeral was held for Young Dolph on November 30 and a section of a street in the neighborhood where he grew up was renamed for him on December 15.

He was honored a day later at a public celebration at FedExForum, the home of the NBA’s Memphis Grizzles and the University of Memphis men’s basketball team.

In his music, Young Dolph rapped about being a drug dealer and life on the streets in Memphis.

He considered himself a workaholic and in recent years was focused on growing his business.

‘I’m a CEO first, then an artist,’ he told the writer Gary Suarez in a 2020 interview for Forbes, saying he had strategically held off on signing with a major label.

‘As long as I keep going up and keep working, my value is going to increase.

Boy, 2, who was kidnapped from church nursery by a stranger back in his mom’s arms

Churchill’s OTHER bunker: Disused Tube station near Piccadilly is opening to the public next month