A homeless man with a history of assault charges was finally arraigned in court after he knocked a Good Samaritan to the ground and mugged him in New York City on Wednesday.

Xavier Israel, 25, who previously assaulted three other people in the past two weeks, was booked in Manhattan Criminal Court on Thursday for attacking an unidentified 59-year-old man who tried giving the homeless man his coat amid freezing temperatures. He has been charged with assault, robbery and grand larceny.

Israel had been arrested and released for three previous attacks, one on January 2, when he allegedly beat up two 18-year-olds in Central Park, and then on Saturday when he attacked a 49-year-old woman who tried to offer him help.

Israel had been able to repeatedly skirt jail due to new Manhattan District Attorney Alvin Bragg’s ‘woke’ policies, which have been criticized for being soft on crime. 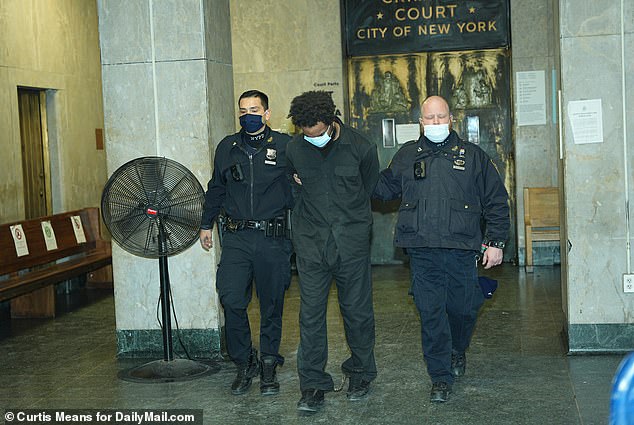 Xavier Israel, 25, was arraigned in in Manhattan Criminal Court on Thursday after he attacked and mugged a Good Samaritan, 59, who tried giving the homeless man his coat 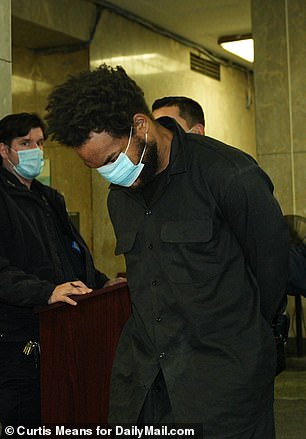 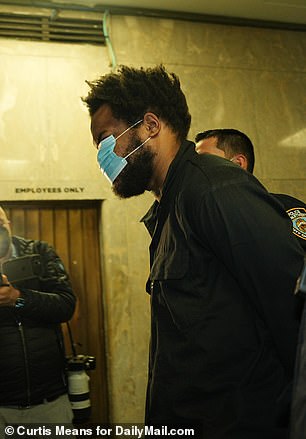 Xavier had assaulted two others before Wednesday’s attack. The 25-year-old was charged with assault, robbery and grand larceny 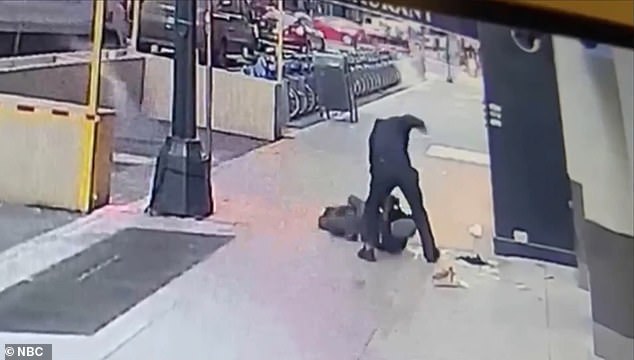 The victim can be seen on the ground after being pummeled by Israel, who ran off with the man’s wallet, which had $1,500 cash in it after police recovered it during his arrest

Surveillance video of the incident shows the victim as he tried to help Israel, who had been lying on the sidewalk at 476 5th Avenue around 8 p.m. on a particularly cold evening, footage obtained by the New York Post shows.

The victim gently places a jacket he was wearing on Israel before the homeless man springs up and pushes him into the ground.

Israel took the man’s wallet from his back pants pocket while he was on the ground before fleeing the scene.

The victim attempts to get his wallet back before Israel punches him and throws him back to the ground, video shows. 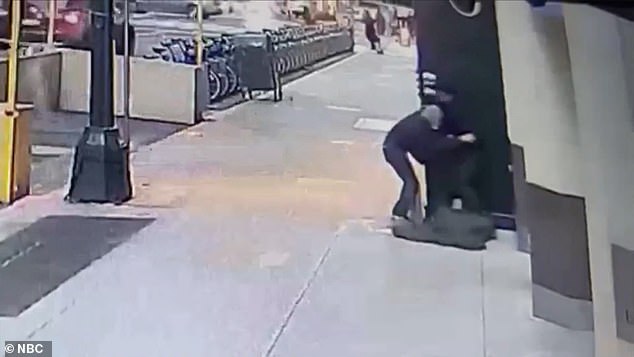 Xavier Israel had been lying on the sidewalk on 5th Avenue around 8 pm when he punched and robbed a 59-year-old Good Samaritan who tried to give him his coat, surveillance video shows 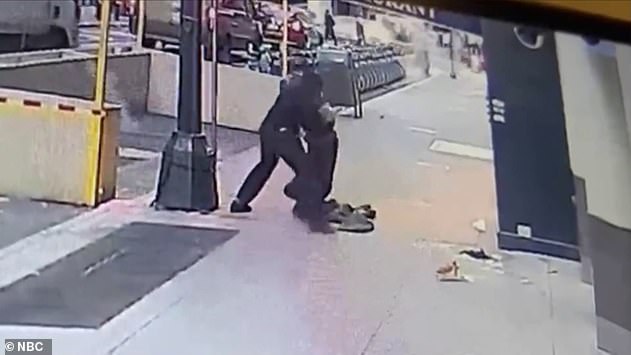 Israel was arrested shortly after on West 41st Street and 5th Avenue, the Post reported.

Authorities quoted witnesses as saying that Israel had stuffed his pants with cash.

Officers ended up recovering almost $1,500 from him.

The victim reportedly refused medical attention at the scene.

This is the fourth person Israel has attacked in less than two weeks.

He similarly attacked another Good Samaritan on Saturday, when he beat up a 49-year-old woman who was trying to offer him help outside of East 81st Street. 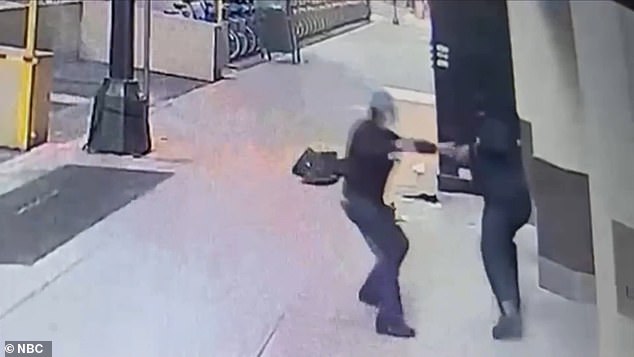 The man tried in vain to get his wallet back, but Israel once again punched the victim to the ground 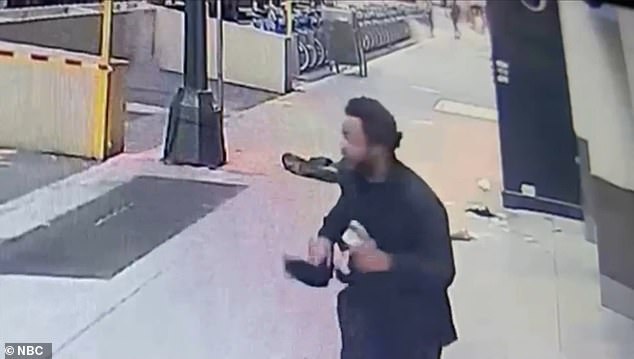 The unnamed victim in that case was also pushed to the ground during the attack and received a cut on her elbow in the fall.

Israel was arrested in that incident, too, and got slapped with similar charges of assault before being released on a desk appearance ticket.

His violent rap sheet shows he also assaulted two other people, a man and a woman, at Central Park on January 2, and was subsequently released following that attack, too.

The Post reported that Israel randomly punched the two 18-year-olds as they sat on a rock inside the park, a case where he had again been charged with assault.

It’s another embarrassment for new DA Alvin Bragg, who has spent most of his first month in office under fire over his soft-on-crime policies, which include calling on prosecutors to ditch felony armed robbery charges and instead charge suspects with petit larceny and not seeking carceral sentences for criminals. 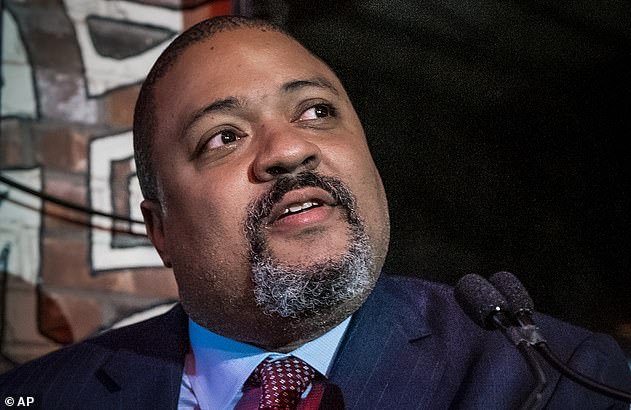 Bragg has been criticized for a new policy to downgrade felony crimes such as burglary, armed robbery and drug dealing 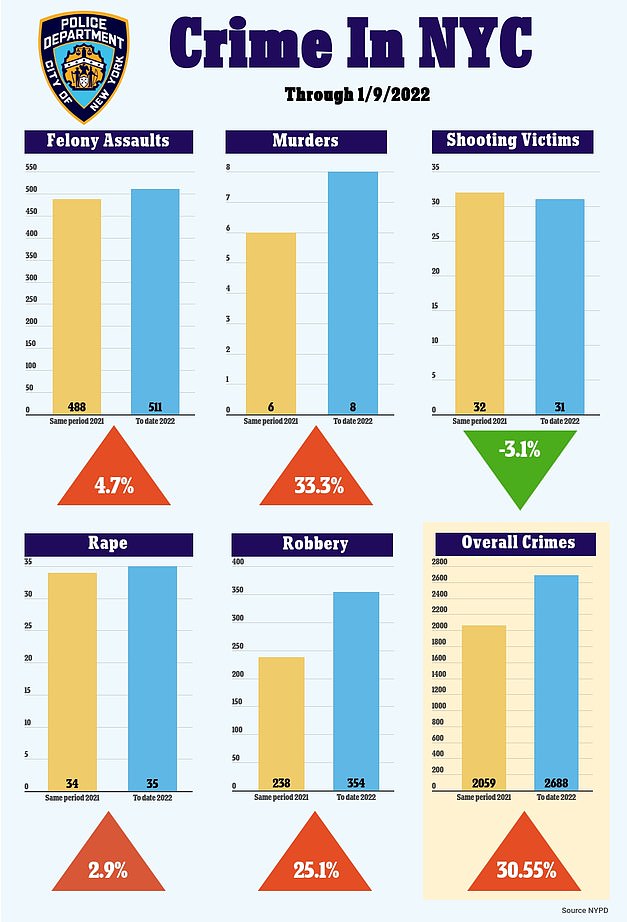 Since 2020, crime in New York has soared thanks to a combination of laxed bail reforms and lack of police

First-degree robbery in New York State carries a sentence of between five and 25 years in a state prison, but petit larceny carries a maximum sentence of just one year in jail and a $1,000 fine.

Robbery continues to surge in the Big Apple since the beginning of the year. There were 354 reported across the city through January 9, up 25 percent from 238 in the same period in 2021.

A former Manhattan DA has called Bragg’s policies ‘an affront to every law-abiding citizen.’

‘Violent criminals now have carte blanche to re-offend, knowing full well that they will never again sniff the inside of a jail cell,’ former Manhattan assistant DA Daniel Ollen said.

‘If you thought things couldn’t get any worse, think again. God help us.’

Bragg was elected Manhattan DA in November after winning a crowded primary in June.

Researchers pinpoint the best soundtrack for different times of the day