A passenger who spent weeks trying to find his lost luggage eventually decided to storm an office at Melbourne Airport after the GPS tags, attached to his suitcases, pointed him in the right direction.

Shane Miller, a cyclist and IT professional from Ballarat, landed at Melbourne Airport with Singapore Airlines in mid-June after a week-long trip to Europe.

When he failed to find his suitcase on the baggage carousel, Mr Miller was told his bag hadn’t made the connecting flight and was still somewhere in transit.

Airport officials told him he would be contacted as soon as it was found.

After filling out the required lost luggage forms with Singapore Airlines and their baggage carrier Swissport, he left he airport and returned home.

What the airport didn’t bank on however was the the Apple Airtag attached to Mr Miller’s bag, which pinged a few hours later.

‘The location of my bag wasn’t visible until it arrived at Melbourne about 8.30pm after I was back home in Ballarat,’ Mr Miller told Daily Mail Australia on Wednesday.

‘I was relieved to know the location of my bag and had expected ongoing updates and delivery within the a day or two.’ 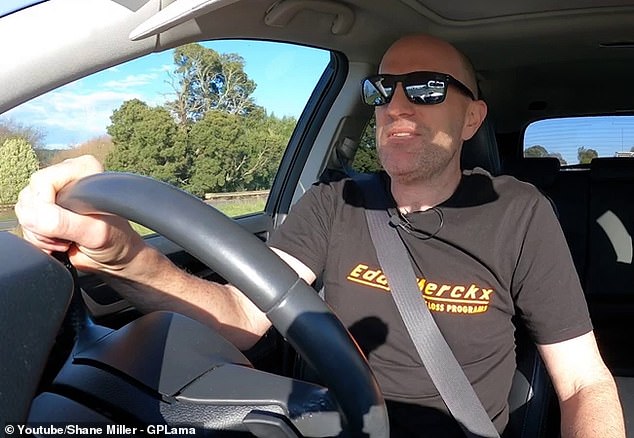 Shane Miller flew into Melbourne last week after a quick trip to Europe but his luggage was lost. After a full week of no response from customer service about his bags he travelled to the Airport himself and tracked it using the Apple Airtag on the bag (pictured)

In a video, uploaded to TikTok this week, Mr Miller said he spent a week trying to contact the airline and Swissport but failed to speak to anyone in customer service.

‘I didn’t think there was that much in the bag but after tallying it all up this week there’s over $6500 worth of stuff in there,’ he said.

‘The bag itself is $800, there’s cycling gear worth a few thousand, cycling kits, clothing, gifts for my family.

‘My beef with Singapore Airlines and their ground handling service Swissport is that there’s been no interaction. The number I was provided for Swissport the night I landed I’ve called 16 times and received no callbacks whatsoever.

‘It goes to voicemail and somebody is checking those because the box is emptied every few days but no response’. 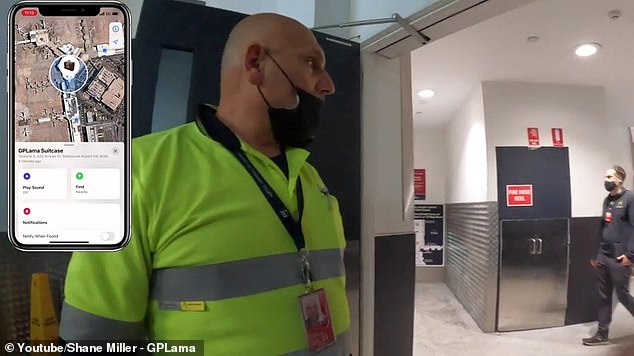 Mr Miller’s Apple Airtag in his bag guided him to the suitcase’s exact spot – a security office at Melbourne Airport.

‘The website that lists the lost luggage cases hasn’t been updated. If I didn’t have that tag I would have no idea where in the world the bag was, the last I’d seen of it was at the airport in Amsterdam,’ he said.

‘After a week of unsuccessful attempts at getting my bag I decided to get in the car and drive back to Melbourne Airport and start knocking on doors.’ 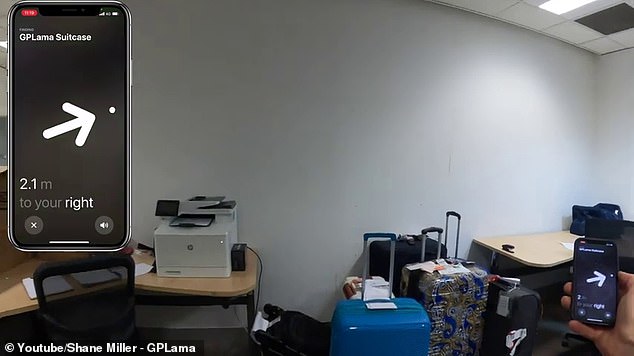 After driving the two hours from Ballarat and paying $30 for a half hour of airport parking, Mr Miller headed into Terminal 2 and followed the location tracker on his app.

‘Hopefully this will be a case of just pick your bag from this lineup but I don’t think it will be that easy,’ he said.

After walking into a baggage area behind security doors, a friendly guard informed him the office for Swissport is upstairs and that the locator might be pinging the upper level.

He went upstairs and was taken into the Swissport offices by an employee after explaining his situation.

He was then led, still following his phone, through rooms which appear to be filled with stored luggage, sports equipment and even a guitar amp, all labelled with bag tags.

Mr Miller then finally located his bag among the collection after venturing into a third luggage room and was allowed to collect it after showing his ticket and ID match the baggage tag. 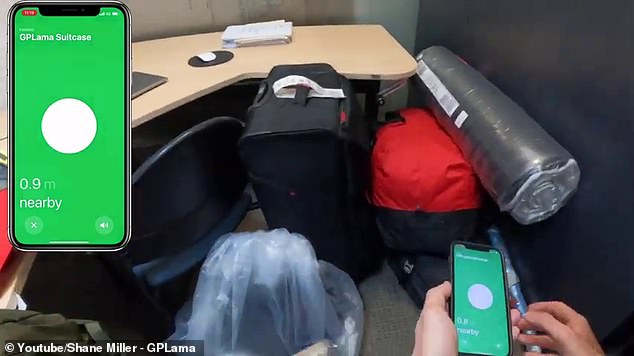 On the drive back, Mr Miller expressed his frustration at the situation.

‘I had a conversation with them about the customer service line being unanswered and they acknowledged that,’ he said.

‘I’m lucky I got my bag back so easily. Given there was so many other bags there I just know there’s other people missing their luggage as well.

‘Those people probably don’t have Airtags and won’t be able to get through on the phone or email so they’re in the dark.

‘Is that customer service? Having a lot of people’s bags, maybe a hundred, dumped in a spare room with no apparent follow-up.

‘There’s a tonne of bags in there across multiple offices piled up on and around office desks and I didn’t see any indication they were being processed.’

Mr Miller told Daily Mail Australia that even after collecting his bag himself he has had no contact from Singapore Airlines or Swissport and the the ‘Delayed Baggage Report’ on the website he was given remains unchanged.

Sydney residents stunned as fish washes up in Summer Hill