The woman police allege posed as a doctor to write 600 fake medical ‘exemption certificates’ is a life coach who battled drug addiction for many years.

Maria Pau, also known as Maria Power, is alleged to have issued the exemptions from a premises in Labrador on the Gold Coast, with the certificates stating a person is exempt from undergoing COVID testing, receiving a vaccine and wearing a mask.

On Wednesday, police arrested a 45-year-old woman from Darling Heights, near Toowomba, at an address on Robert St, Labrador. She was charged under Health Practitioner Regulation National Law with five counts of taking a title indicating a person is a health practitioner.

She was believed to have charged $150 for the certificates.

At a press conference in Brisbane on Thursday, Detective Acting Inspector Damien Powell from Taskforce Sierra Linnet said Ms Pau had made admissions to having issued 600 exemption certificates.

‘She’s of the belief that she’s entitled to issue those certificates,’ Det Inspector Powell said. 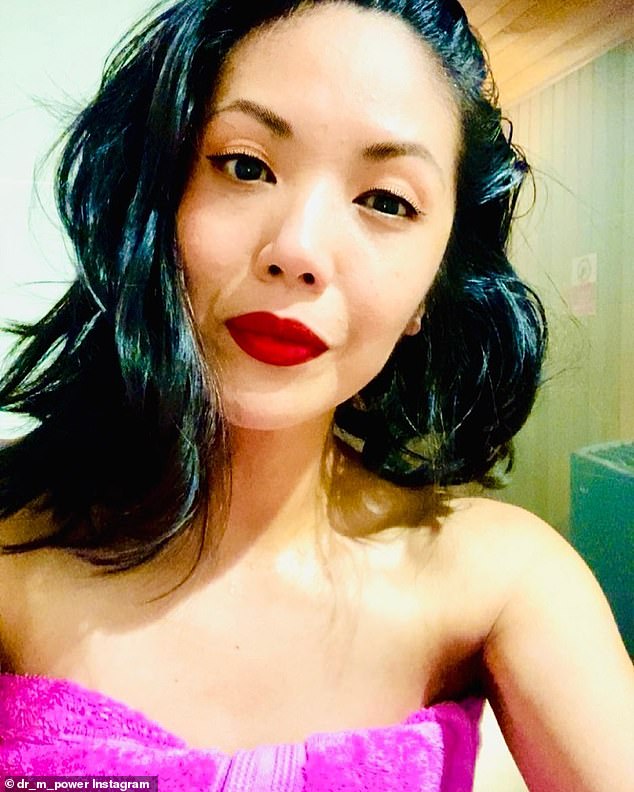 Maria Pau, also known as Maria Power, is alleged to have issued the exemptions from a premises in Labrador on the Gold Coast 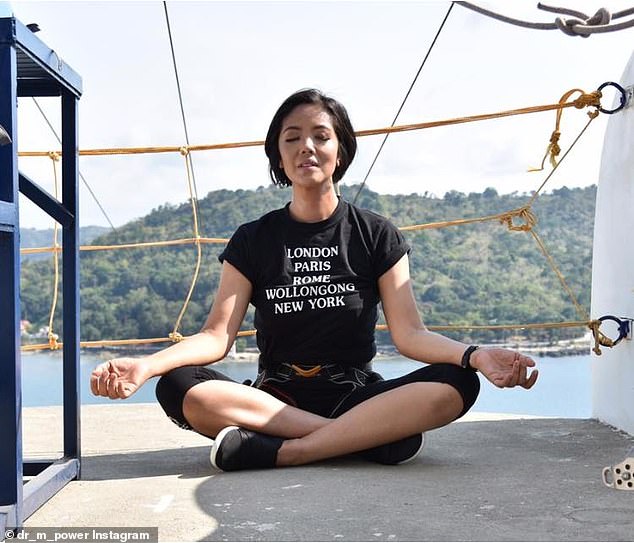 ‘She does not hold a medical doctorate degree. And as I indicated earlier, she’s not registered with Ahpra (the Australia Health Practitioner Regulation Agency), nor is she registered with Medicare.’

The 45-year-old has an extensive social media presence in which she claims her charity is ‘multi-award winning’ and that she is an international best-selling author who has written over 150 articles and academic texts regarding wellness and recovery from addiction.

One of her e-books, Kill Your Addiction Before It Kills You: How I Transformed My Life of Addictions, Bipolar and Suicide, sells for $19 on the Coaching with Substance website. 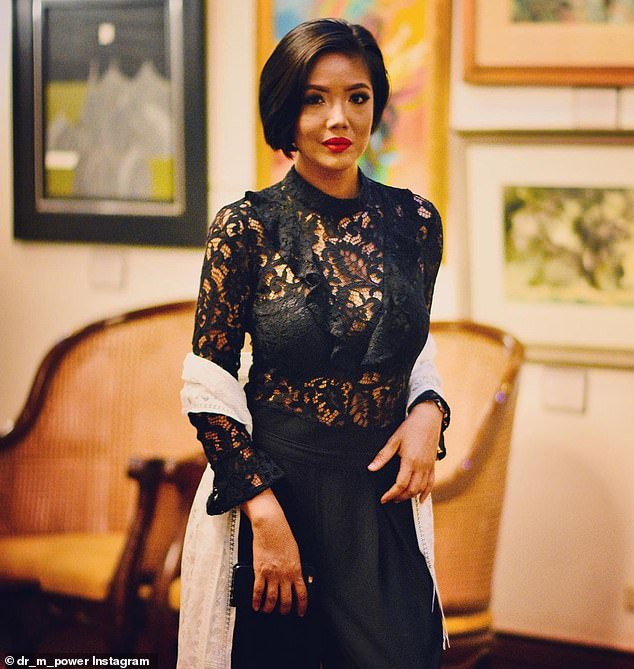 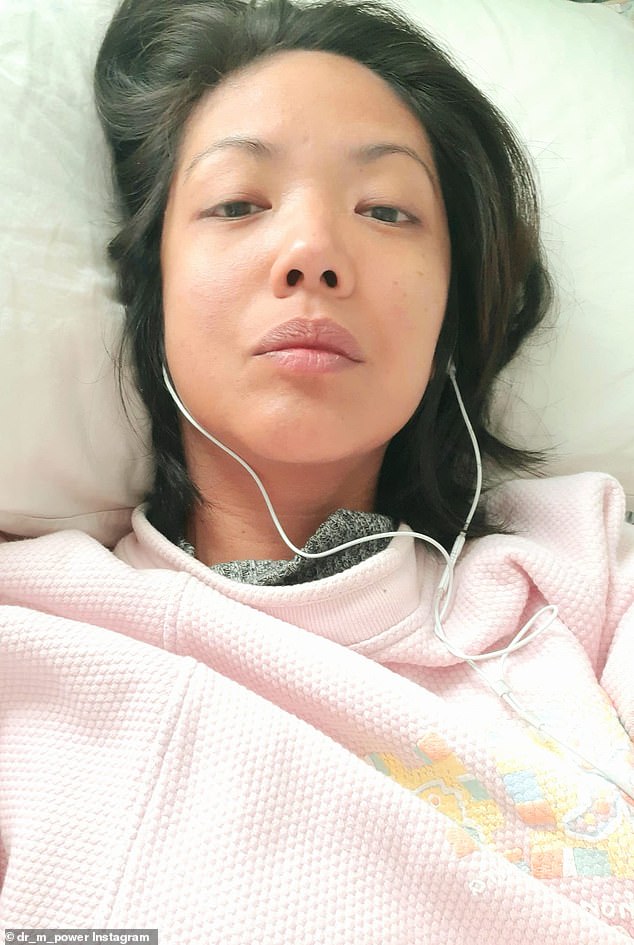 Originally from Makati in the Philippines, Ms Pau discusses her own 20-year battle with ‘poly-drug use’

The book, the blurb says, tells the story of how Ms Pau travelled on a plane alone at 11 years of age to come to Australia.

‘Started drinking at 13 and began smoking crystal meth at 15 years old. By 18 she was selling her body for a living and spent her 20s modelling, dabbling with marijuana, cocaine, ecstasy and LSD, partying with socialites, fashionistas, politicians, celebrities and going out with Yakuza, Triad and 5T gangster boyfriends.’

Originally from Makati in the Philippines, Ms Pau discusses her own 20-year battle with ‘poly-drug use’, including a ‘history of many psychiatric institutionalisations in four countries’.

‘Somehow I found myself all alone as a fashion model in Asia at 17 years old, with no chaperone and no guidance from any parent figure.

‘I look back now and realise that it was a sure-fire recipe for attracting the wrong people of the world.’

In one Youtube video publicising her book, Kill Your Addiction, she recounts spending a year of ‘absolute recovery’ in 2013 after her father died the previous year.

‘I was detoxing from all of the toxicity I heaped upon my life, like coke addiction, meth addiction, toxic men, domestic violence, in and out of psychiatric wards, all of that I’ve documented so that you can see how you too can transform a life that is rampant with addiction issues,’ she said. 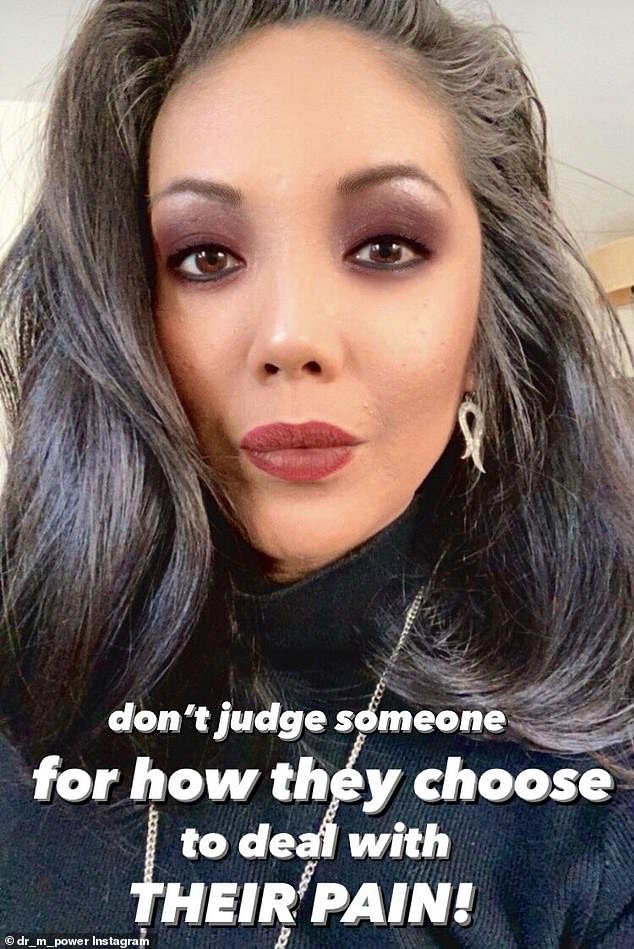 Ms Pau is a doctor, just not a medical doctor. She graduated as a Doctor of Professional Research (Addiction) at the University of Southern Queensland in August 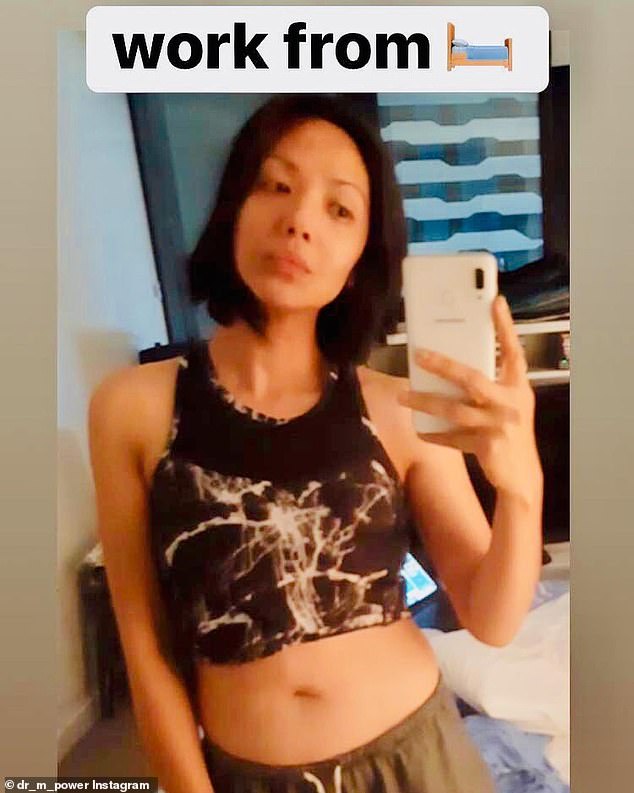 Ms Pau is a doctor, just not a medical doctor. She graduated as a Doctor of Professional Research (Addiction) at the University of Southern Queensland in August.

In an online bio, Ms Pau’s doctorate was on ‘measuring the effect of coaching in subjects with substance use issues using the mind-body-spirit framework … coined ‘Collaborative Peer Recovery Coaching’.’

A number of her social posts reveal Ms Pau’s attitude throughout the onset of the Covid-19 pandemic and the subsequent public health restrictions.

‘ARE WE REALLY STILL penalising those without FACE MASKS OR giving energy to A VIRUS with a less than 2% death rate. ‘I’m so confused as to how the COVID can still be the number one talked about subject when it is now COMMON PUBLIC KNOWLEDGE that our ENTIRE WORLD is being systematically controlled by a Global Elite PEDOPHILE RING.

‘Half of our country is being blindly distracted by a BULLSHIT Virus and the other half is being SILENCED.’

The post was signed off as ‘Coach M Power’.

In a post to Facebook and Instagram on August 10, Ms Pau asked ‘Is your employment at risk?’ alongside a photo of the Public Health Amendment (Vaccination Compensation) Bill 2021 (NSW).

She then provided a number of points people should raise in a formal letter or in ‘disciplinary’ meetings with their employer.

The points repeated well known talking points of the anti-vaccination movement regarding the safety and effectiveness of the Covid-19 vaccines.

‘The [vaccine] has not been properly safety tested. Not enough testing has been done on people with comorbidities, pregnant women or the elderly and yet it being [jabbed] into them with disastrous consequences,’ she posted.

On the givenow.com.au crowdfunding platform, Ms Pau’s charity sought donations of $200,00 for an 8-week ‘Breakthrough Recovery Incubator’ to help people recover from a variety of addictions. The site showed $69,900 had been raised to date.

‘The participants will be invited to apply to this 8-week breakthrough incubator program, once our fundraising goals of $75,000 are met for the first group of 30 people (it is $2,500 scholarship fund for each person to participate),’ the fundraiser states.

British mother, 79, reunites with some of the 21 child refugees she rescued from Bosnia