Marks & Spencer has today announced it will ban the sale of disposable barbecues across all its UK stores.

This follows a plea by the London Fire Brigade to retailers to stop selling them after a wave of wildfires in the July heatwave.

M&S tweeted: ‘We’d already stopped selling disposable barbecues near national parks and in London but given the unusually hot and dry conditions, we’ve taken the precautionary step of removing them from sale across the UK.’ 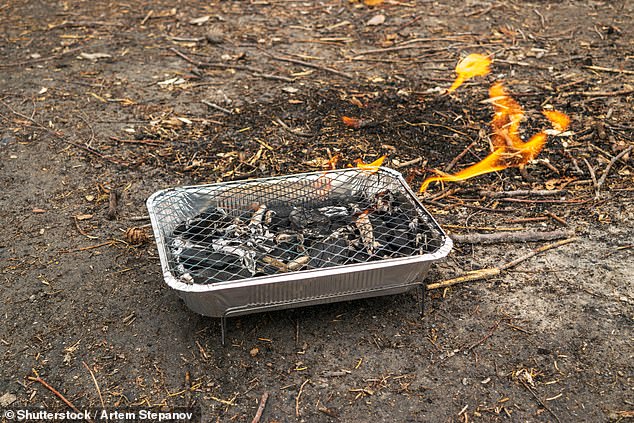 The number of 999 calls received was more than double taken for the same period last year.

Thirty-four grass fires required an attendance of four fire engine and above.

They said they cause a ‘significant fire risk’ if they are not put out properly as they can cause grass fires in open spaces.

In addition, Disposable barbecues also pose a health risk and heat can be retained for many hours after a barbecue has been put out.

‘We need urgent action now to see a national ban on the sale of disposable barbecues.

‘They can be bought for as little as five pounds and can cause untold damage, especially when the grass is as dry as it has been over the last few weeks.

‘Last week is another example of how we are increasingly being challenged by new extremes of weather as our climate changes and we’re developing long-term strategies to deal with more incidents like this in the future.’