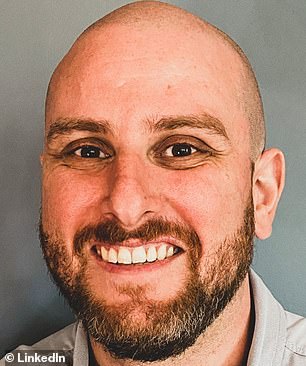 Tandem Marketing owner Arthur Freydin, 38, has been accused in a federal lawsuit of secretly videotaping his live-in assistant in the bedroom and bathroom

A married marketing executive has been accused of secretly videotaping his young live-in assistant at his family’s Manhattan apartment, and then attempting to blame his own 10-year-old son for installing the recording device and the spy app on the father’s cellphone.

Arthur Freydin, 38, his wife, Sarah McLoughlin, 34, and the man’s Manhattan-based company, Tandem Marketing, were all named as defendants in a federal lawsuit that was filed on Monday in the US District Court for the southern District of New York, alleging violations of New York human rights and labor law, gender discrimination, sexual harassment and negligent infliction of emotional distress.

‘This action arises from yet another tragic tale of a New York couple…using their influence and money to commit unthinkable acts of depravity and sexual deviance at the expense of a young, trusting woman in desperate need of gainful employment,’ the complaint states.

According to the 24-page lawsuit, the plaintiff, identified only as Jane Doe, was ‘sexually assaulted, sexually harassed and surreptitiously recorded in various stages of undress in the bathroom, bedroom and other places by Freydin and McLoughlin.

Court documents obtained by DailyMail.com allege that McLoughlin initially hired Doe – a recent college graduate – as a babysitter to her two children in February 2021, but later she expanded the scope of her employment to include working as an assistant to her husband at his marketing agency. 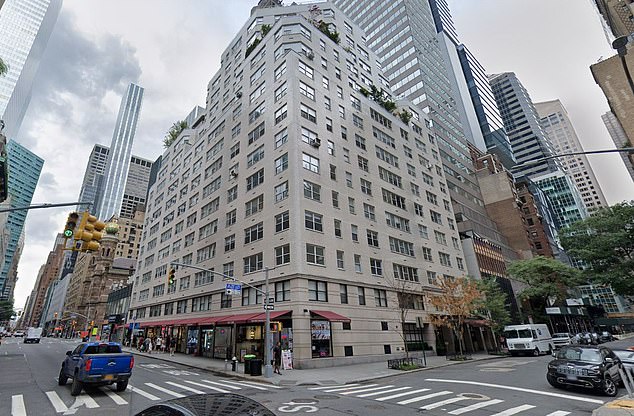 As part of her duties, Doe was required to live at the couple’s apartment on East 56th Street in Midtown Manhattan 4-to-5 days a week, where the atmosphere was described as being ‘controlling and sexually charged.’

The plaintiff’s attorney, Dan Perrone, claimed in the filing that in August, Freydin forced his assistant to strip down to her bra, ostensibly so he could photograph and videotape himself applying kinesiology tape to her neck and back as part of a marketing demonstration.

‘In the process of doing so, [Freydin] ran his hands along her exposed neck and back,’ the complaint alleges. ‘Freydin then proceeded to take photographs and video recordings of Plaintiff in her bra on his cellular phone under the guise of depicting application of the kinesiology tape.’

He later told his assistant that the photos and video he took of her were ‘inappropriate’ and could not be used in the marketing campaign.

According to the filing, Freydin, who is married with children, required his female assistant to have dinner with him while his wife was out of town, accompany him to his chiropractor appointments, and also join him at the gym where he ‘would follow her around the gym to watch her workout [sic].’

But things came to a head on September 19, when the assistant allegedly discovered a hidden camera in her bedroom at Freydin and McLoughlin’s home, and unplugged it, only to find it actively recording the next day.

When Doe disconnected the device a second day, Freydin allegedly confronted her about it and demanded to known why the gadget had been unplugged. 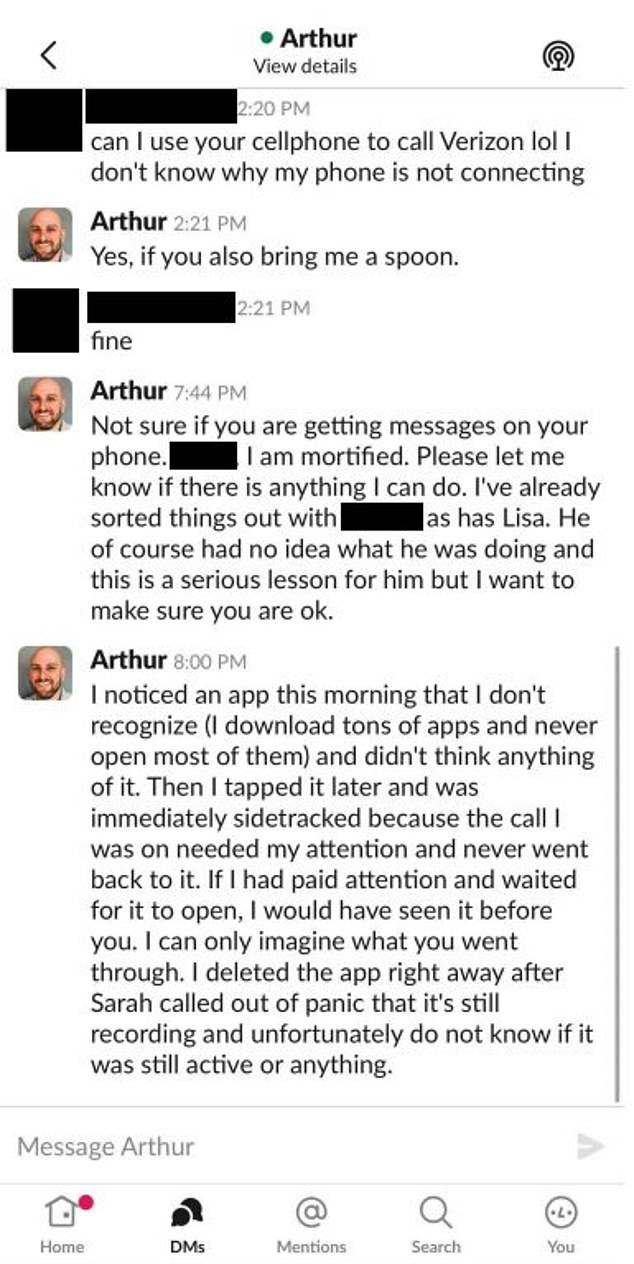 In text messages to his assistant (pictured), Freydin claimed it was his 10-year-old son who had installed the recording device and also the accompanying app on his father’s phone

Freydin, the owner of Tandem Marketing and Basic Creative, hired the plaintiff, named in the complaint as Jane Doe.

Ten days after Doe discovered the device in her room, she asked Freydin to use his phone to make work-related calls because hers was not working, and on it discovered a spy camera application called LookCam.

The lawsuit claims that the app contained video of the assistant from inside the bathroom she shared with Freydin and McLoughlin at their apartment. The footage was in the man’s recently viewed history.

The assistant went to the couple’s apartment and found a hidden camera made to look like a USB charger in the bathroom.

‘During the 4- to 5-nights a week Plaintiff stayed in the apartment, she used the bathroom in which the spy camera was hidden daily to urinate, defecate, dress, undress and shower, among other things, and, thus, had been nude therein on multiple occasions,’ the complaint reads.

McLoughlin then contacted her husband to tell him that his assistant had found the spy camera, and Freydin later that night texted Doe, admitting that the device had been recording in the bathroom, but claimed that the culprit was his 10-year-old son for a previous marriage.

‘I’m mortified,’ he wrote to his assistant. ‘I’ve already sorted things out with [my son]… He of course had no idea what he was doing and this is a serious lesson for him but I want to make sure you are okay.’

The complaint alleges that when the assistant reported the incident to the police, Freydin and McLoughlin fired her from her $55,000-a-year job and deleted her work email.

The young assistant was said to have been left suffering from mental, meotional and psychological injuries, and ‘feeling dirty, used, and damaged.’

Australia’s beaches are littered with one main toxic substance – so how do we fix it?