The final outstanding conviction in the Salem Witchcraft Trials has finally been axed 329 years on after an eighth grade teacher and her class fought to clear the persecuted woman’s name.

Elizabeth Johnson Jr’s exoneration came on Thursday, centuries on from the 1692 conviction which saw 22 year-old Johnson nearly put to death after she admitted practicing witchcraft.

The judgement, part of a $53 billion state budget signed by Massachusetts’ Governor Charlie Baker, cleared Johnson, a woman who likely had a mental disability but never married or had children when she was accused in 1692.

None of the women who admitted witchcraft were ultimately put to death – although all 20 who denied it were.

Johnson Jr was spared, and went on to die in 1747, aged 77, with her name seemingly-forever smeared by the withcraft conviction.

Her exoneration served as the culmination of a three-year effort by civics teacher Carrie LaPierre and students at North Andover middle, who relentlessly campaigned to exonerate Johnson.

Aided by a state senator who helped champion the cause, the movement was ultimately successful, with officials deciding to pardon Johnson, who was given a reprieve from death after being forced to plead guilty during the infamous trials. 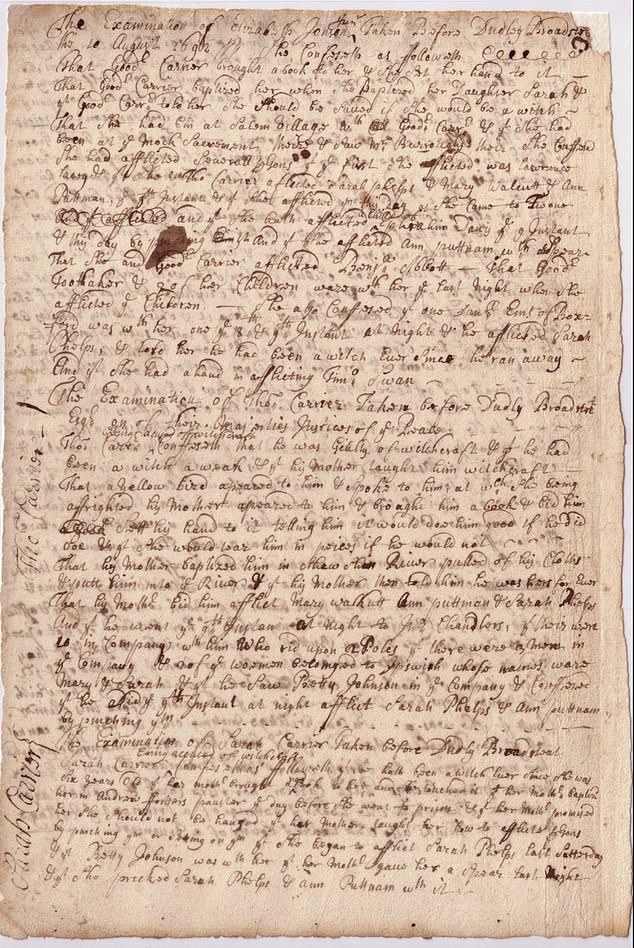 Historical document from the Salem Witch Trials on the examination of Elizabeth Johnson Jr. She died in 1747 at the age of 77, but her dubious distinction of being a ‘witch’ remained – until now 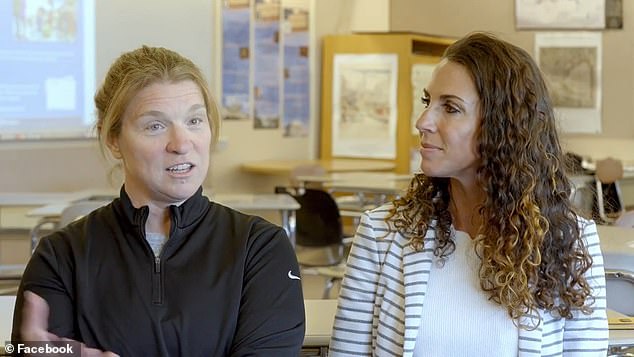 The exoneration, announced Thursday, came as the culmination of a three-year effort by civics teacher Carrie LaPierre (at left) and her students at North Andover middle, who, aided by State Senator Diana DiZoglio (at right), relentlessly campaigned to exonerate Johnson 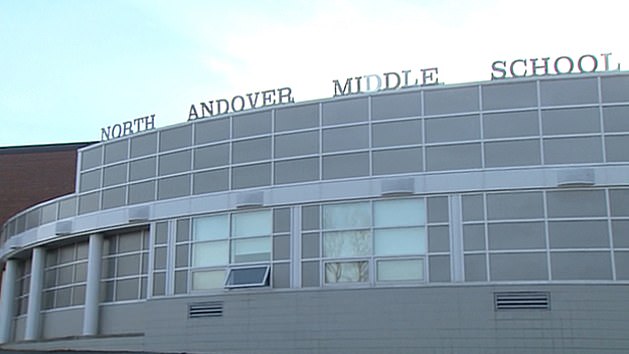 ‘I’m excited and relieved,’ LaPierre, who started the campaign with her since graduated class last year, told the New York Times in an interview Saturday.

She told the paper that she, however, was saddened that she has not yet gotten to revel in the victory with her kids, who are currently on summer break.

‘But also disappointed I didn’t get to talk to the kids about it,’ she shared. ‘It’s been such a huge project.’

The effort began early last year, when LaPierre’s class was covering the notorious witch hunt as per the public school’s yearly curriculum.

During these lessons, LaPierre came to the realization that, within various legislative attempts to exonerate the dozens of women and men found guilty by Salem city officials, Johnson’s name, inexplicably, was not included. 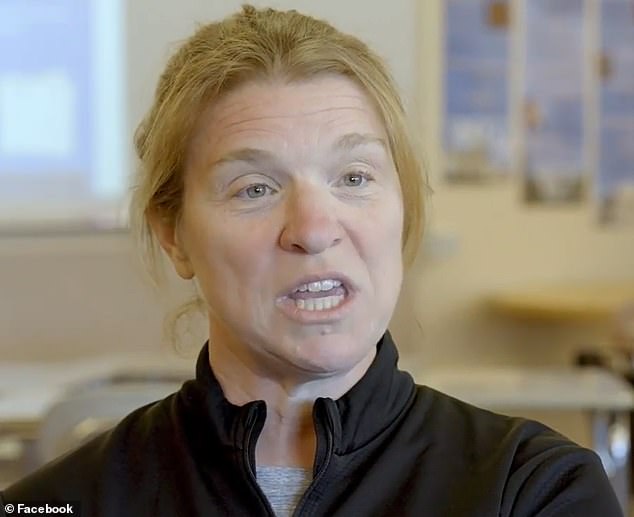 The effort began early last year, when LaPierre’s class was covering the notorious witch hunt as per the public school’s yearly curriculum. During these lessons, the class came to the realization that, within various legislative attempts to exonerate the dozens of women and men found guilty by Salem city officials, Johnson’s name, inexplicably, was not included

That realization, LaPierre said in an interview last week, came after she met a historian who had penned a book about Johnson’s case and how her conviction remained, at a meeting for North Andover’s Historical Society.

The author, LaPierre said, was Rhode Island archivist Richard Height, who was discussing the case with another teacher, which LaPierrelast woma overheard.

They then got talking about the case, and she realized that due to Height’s being from another state, he was barred from filing legislation that could appeal Johnson’s case.

Haight then offered her the chance to take up the case, to which the teacher without hesitation accepted. She then shared the story with the class, and filed the legislation.

‘I certainly didn’t start this project,’ LaPierre told makers of a documentary about her and her students’ struggles to exonerate Johnson, titled The Last Witch.

‘The author, Richard Height, who wrote the book about Elizabeth Johnson and discovered she had never been exonerated,’ LaPierre told the filmmakers.

‘He was a member at the Historical Society in North Andover, and it just so happened another middle school teacher was there and they were speaking about this.

‘And Richard is from Rhode Island, so he couldn’t’ do legislation. So, it was offered up to me, and I said, “sure, we’ll take it.”‘ 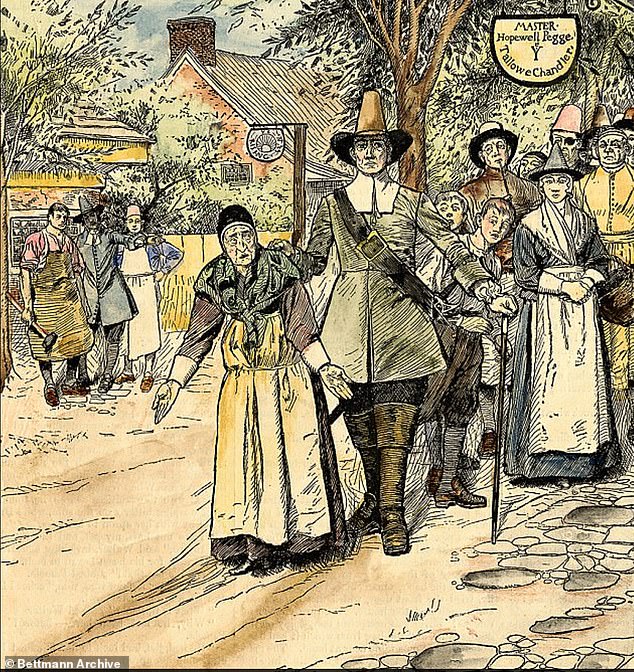 This drawing is called: ‘The Arrest.’ The original caption says: ‘Illustration shows an officer of the law leading away an elderly woman, who has her hands out in a gesture of innocence’

Since hers wasn’t among the several convictions formally set aside, Johnson’s still technically stood, perturbing LaPierre and her pupils to no end.

‘We called her E.J.J., all the kids and I,’ she told The Times of their then building interest in Johnson and her case. ‘She just became one of our world, in a sense.’

Johnson, unlike others wrongfully accused during the 17th century witch hunt, never had children and thus had no descendants to act on her behalf – further troubling LaPierre and her students, who felt the young woman had been misrepresented.

The class then petitioned to local lawmakers about the prospect of getting the ruling overturned – an appeal that eventually fell on the ears of Massachusetts State Senator Diana DiZoglio, who decided to help the class with their cause.

Subsequent legislation introduced by the politician, a Democrat from Methuen, was tacked onto a budget bill and approved last May, declaring Johnson pardoned and absolved of all alleged guilt.

The judgement saved Johnson – whose reported, unidentified mental disability likely served as a factor during the frenzy of Puritan injustice that began in 1692 – from becoming another lost statistic 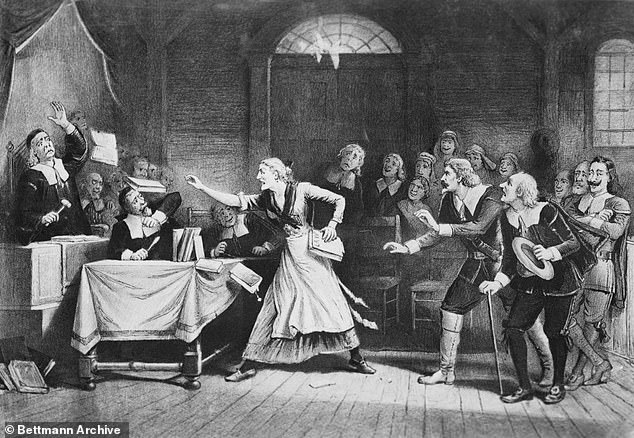 The trials – fueled by feelings of superstition, fear of disease and strangers, and other petty indicators – saw 19 hanged, and one man crushed to death by rocks. Thirty, including Johnson, were found guilty, meaning 10 managed to escape death

The trials – fueled by feelings of superstition, fear of disease and strangers, and other petty indicators – saw 19 hanged, and one man crushed to death by rocks. Thirty, including Johnson, were found guilty, meaning 10 managed to escape death.

Meanwhile, dozens of more than 300 accused during the nearly yearlong hunt had their convictions tossed and were officially cleared, including Johnson’s own mother.

It is not clear why Johnson’s name remained over the years, but DiZoglio said it was likely due to the fact that she did not have any children or family and had no surviving relatives acting on her behalf – or that state officials simply failed to notice the oversight.

‘Why Elizabeth was not exonerated is unclear but no action was ever taken on her behalf by the General Assembly or the courts,’ DiZoglio said.

‘Possibly because she was neither a wife nor a mother, she was not considered worthy of having her name cleared. And because she never had children, there is no group of descendants acting on her behalf.

DiZoglio, who testified to the state senate about the case and its importance last May, declared: ‘We will never be able to change what happened to victims like Elizabeth but at the very least can set the record straight.’ 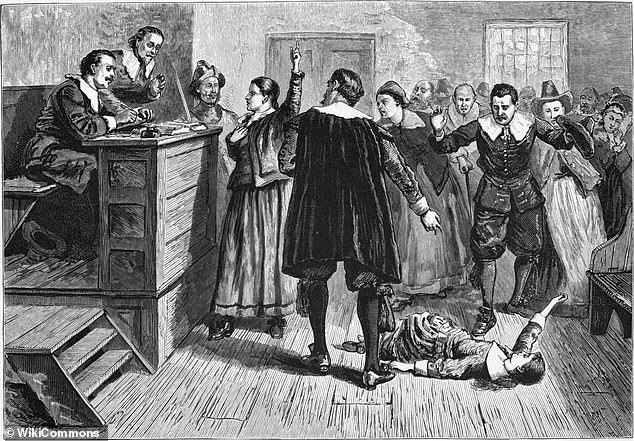 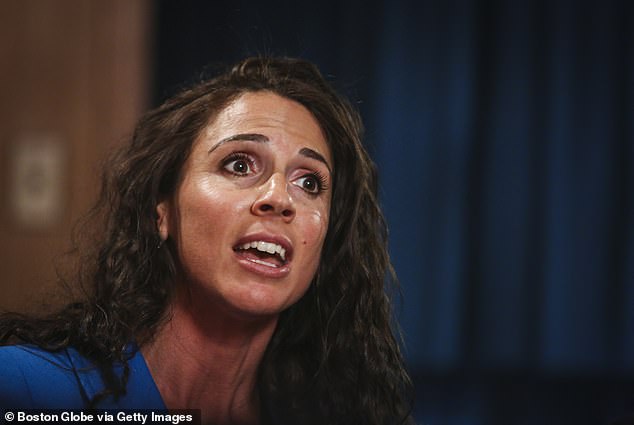 Superstitious townspeople, fearful of the devil, began accusing men and women of witchcraft and hounded scores of ‘witches’ to put on trial.

The hysteria began after a group of young girls in claimed to be possessed by the devil and accused several local women of witchcraft.

As hysteria spread throughout Massachusetts, a court convened in Salem to hear the cases.

The first convicted witch, Bridget Bishop, was hanged that June.

Eighteen others followed and some 150 more men, women and children were accused over the next several months.

Trials continued with until May 1693.

But by that May, the governor of Massachusetts had pardoned and released all those in prison.

At the age of 22, Johnson was one of dozens sentenced to death in the Salem Witch Trials of 1692, during which 19 were hanged and hundreds of others accused.

‘On 10 August 1692, 22-year-old Elizabeth Johnson Jr. of Andover, Massachusetts, was arrested for witchcraft … she told Justice Dudley Bradstreet that she too … participated in the big witch meeting in Salem Village,’ the report penned by DiZoglio states.

Johnson was condemned to death on January 11, 1693 but ultimately received a stay of execution from Governor William Phips. She later died in 1747, at the age of 77.

In 2017, officials unveiled a semi-circular stone wall memorial inscribed with the names of people hanged at a site in Salem known as Proctor’s Ledge. It was funded in part by donations from descendants of those accused of being witches.

LaPierre said some of her students initially were ambivalent about the effort to exonerate Johnson because they launched it before the 2020 presidential election and at a time when the COVID-19 pandemic was raging.

‘Some of the conversation was, ‘Why are we doing this? She’s dead. Isn’t there more important stuff going on in the world?”’ she said.

‘But they came around to the idea that it’s important that in some small way we could do this one thing.’

DiZoglio, whose district includes North Andover, told The Times of the students’ now successful efforts: ‘These students have set an incredible example of the power of advocacy and speaking up for others who don’t have a voice.’ 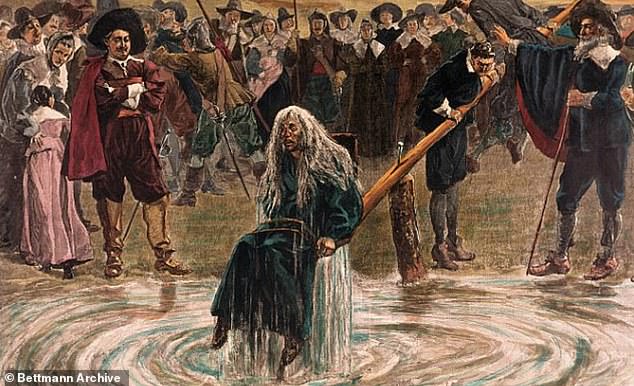 An accused witch is shown going through the judgement trial, where she is dunked in water to prove her guilt of practicing witchcraft

The Block: Elle and Joel quit because she 'didn't want to wear hi-vis for 12 weeks'

Princess Beatrice pregnant: How royal will raise her child as a brother for stepson Wolfie