Police are investigating shocking footage of a McDonald’s bouncer allegedly slapping a teenage customer across the face – after claiming the boy threw a screwed-up paper bag at him as a ‘prank’.

Footage shot outside the entrance fast food chain in Dundonald, near Belfast, Northern Ireland, shows the masked worker gripping the kid by his coat as his friends giggle.

But they are quickly stunned into silence when the man strikes the frightened teenager with his right hand, causing his head to jolt sidewards, before asking ‘are you crazy?’.

The stunned boy asks ‘what?’, before the bouncer, who is still holding the boy at arm’s length, turns him around and marches him into the courtyard where a McDonald’s paper bag can be seen on the floor.

The security guard seeks to justify his actions to witnesses by claiming the unnamed boy threw the paper bag at him, with the teen flippantly responding, ‘I didn’t mean to, it’s a prank’.

The Police Service of Northern Ireland have confirmed they are investigating the incident, which occurred around 10pm on Saturday.

McDonald’s claim the man works for an external security company and has been suspended from working at the fast-food giant’s stores while an investigation takes place. 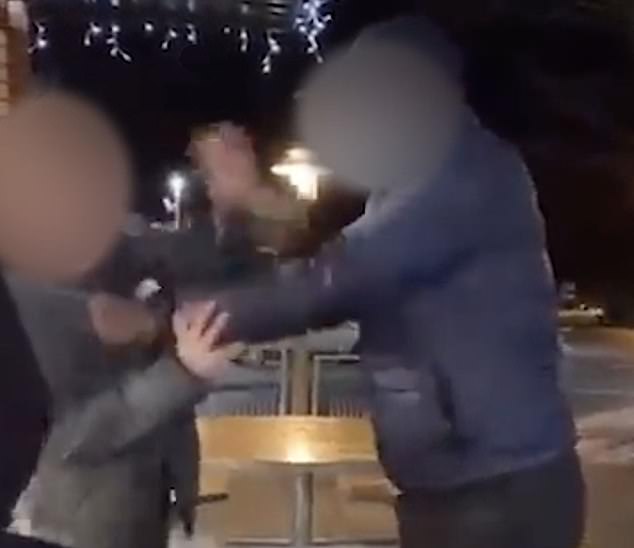 They also stated that a customer became ‘verbally and physically abusive towards the restaurant team’ prior to the altercation.

A Twitter user posted the video which they captioned: ‘You should never lift your hand to a child, especially someone else’s’.

The video has been viewed more than 6,000 times and has attracted dozens of replies, with some slamming the man as ‘out of order’ while others declared the kid ‘deserved it’.

Laura Dunn wrote: ‘Why did no one step in? I’m telling you, if that wee boy was mine it would be the last kid he’d put his hand on.’

Adrian Dun wrote: ‘The young boy deserves all he gets. Too many have no respect these days. We’ve only seen part of the video.’ 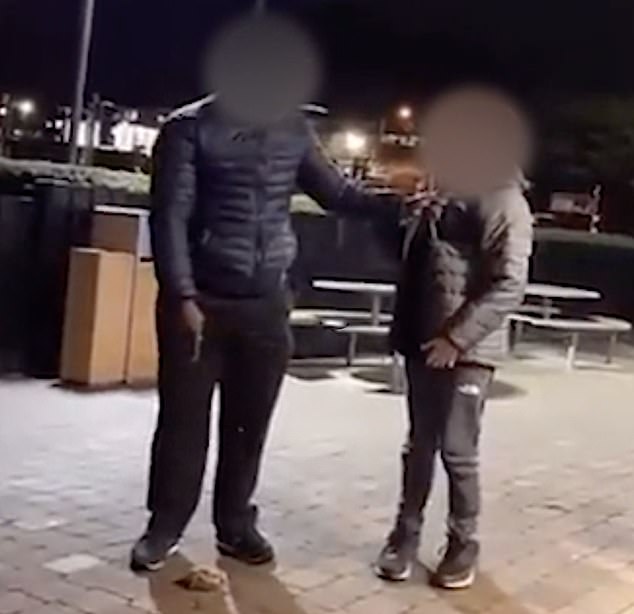 The security guard seeks to justify his actions to witnesses by claiming the unnamed boy threw the paper bag at him, with the teen flippantly responding, ‘I didn’t mean to, it’s a prank’

Rebecca B commented: ‘Don’t be so ridiculous! It’s clear from the video that the boy threw rubbish and that’s why the man slapped him. The man was completely out of order.’

User JR Hartley agreed and wrote: ‘Belfast’s most notorious doormen wouldn’t have cracked another man for that nevermind a child ffs, give yer head a wobble lad.’

A McDonald’s spokesperson said: ‘The safety and security of our people and customers is our absolute priority.

‘This video shows the culmination of an incident in which a customer had become verbally and physically abusive towards our restaurant team.

‘The individual in question works for an external security company and will not be on duty at any of our restaurants while the investigation is ongoing.’

A spokesperson for the Police Service of Northern Ireland said: ‘Police are investigating the report of an assault outside commercial premises in the Upper Newtownards Road area of Dundonald on Saturday evening (January 8th).

‘It was reported at around 10pm that a young male had been slapped across the face by a man.’

Enquiries are ongoing and police have appealed to anyone with any information in relation to the incident to contact 101 quoting reference number 1617 of 08/01/22.

Man 'obsessed' with 'good friend', stabbed her 10 times after a Tinder date with love rival