An unhinged tenured Michigan professor who called his students ‘vectors of disease’ and warned them to ‘keep your f**king distance’ settled his free speech lawsuit against the university where he taught for $95,000 and agreed to retire.

As part of the deal with Ferris State University, the irritated educator Barry Mehler agreed to a three-year gag order, according to a copy of the agreement obtained by the Associated Press.

The professor will have to pay $60,000 if he publicly criticizes the college during that period.

The judge in the case denied his request to be reinstated. 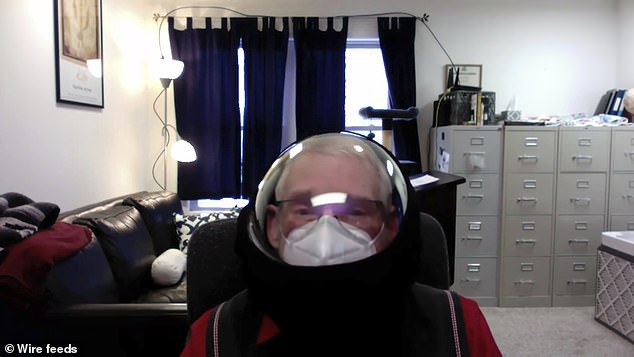 Dr. Barry Mehler, a tenured history professor at Ferris State University in Michigan, called his students ‘vectors of disease’ in a pre-semester video published on Sunday 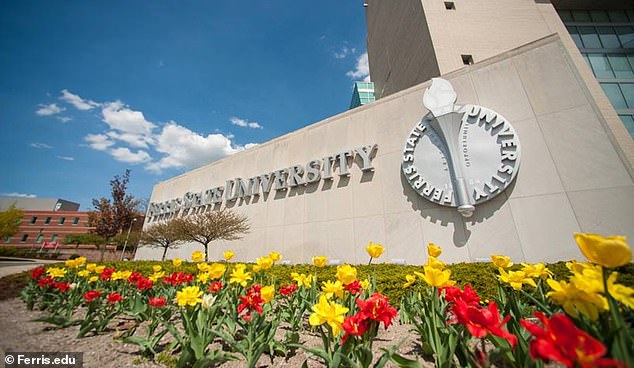 Ferris State (pictured) said Mehler has been placed on leave while his conduct is investigated, but Mehler’s attorney now says the university violated his First Amendment rihts

Mehler was suspended in January after he posted a 14-minute orientation video for his history class peppered with profanity and instructions about the syllabus, grades, plagiarism, classroom attendance and COVID-19 protocols.

In his lawsuit against the college, he said the suspension violated his First Amendment rights and he argued that his vile tirade was part of his ‘style’ that he had been applauded for by administrators in the past.

‘The university should be celebrating and defending Dr. Mehler, not summarily disciplining him,’ his lawyer Matthew Hoffer said in a letter.

‘Dr. Mehler has been inundated with letters of support from current students, former students, and university faculty as well as students, educators and law professors from around the world,’ Hoffer added.

In the video, the professor, who was upset that students were not required to be vaccinated, told the class that he held a tenured position and was going to retire next year so he didn’t want to hear their complaints. 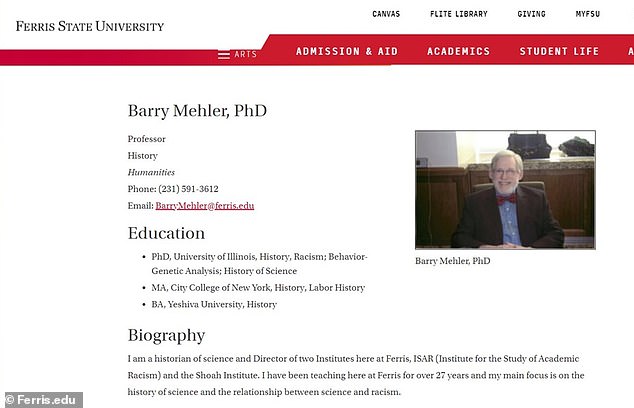 Mehler has been teaching at Ferris for nearly 30 years and is the director of the university’s Institute for the Study of Academic Racism, according to his since-deleted bio

‘Go complain to your dean, f*** you! Go ahead,’ Barry Mehler yells in the video. ‘I’m retiring at the end of this year and I don’t give a flying f*** any longer!’

He also held up a helmet with a visor that he would have to wear in the classroom to keep the coronavirus from infecting him.

‘I will not take questions in class because I´m wearing this f**king helmet in order to stay alive,’ he said, a reference to an astronaut-style helmet with air filters.

The college, which sits in Big Rapids, Michigan 155 northwest of Detroit, had decided to return to in-person classes and Mehler was concerned and unhappy about the risk of contracting COVID.

‘I’m old enough to be your grandpa, and you people are vectors of disease to me,’ he said. ‘So when I look at a classroom filled with 50 students, I see 50 selfish kids who don’t care whether grandpa lives or dies.’ 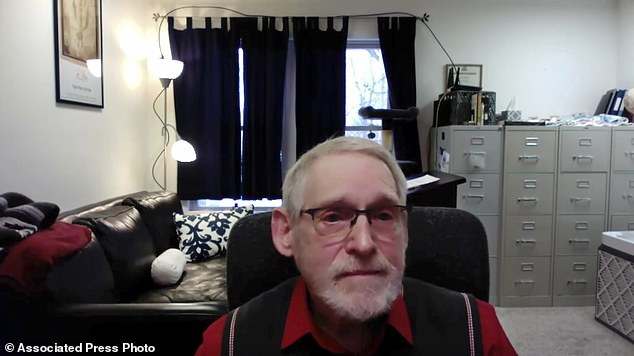 The college suspended him after the video went viral on YouTube, racking up more than half a million views.

In addition to profanity, he made a sexual references as he ranted about his attendance policy, grades, plagiarism and COVID-19.

Mehler, who founded the Institute for the Study of Academic Racism, also told students that it didn’t matter how hard they worked in his class because he randomly predetermined their grades prior to the semester.

‘None of you… are good enough to earn an A in my class,’ Mehler said. ‘So I randomly assign grades before the first day of class. I don’t want to know anything about you. I don’t even want to know your name. I just look at the number and I assign a grade. That is how predestination works…

‘And don’t come… complaining to me. Take your complaints to God.’

Mehler said that his tirade was meant to provoke thought in the students.

‘The whole idea was to get their juices flowing,’ Mehler told the AP in January, referring to the video and his students. ‘But they also knew their grade was not based on predestination. That was simply humorous.’

The Ferris State president at the time, David Eisler, said he was ‘shocked and appalled.’

Weather Australia: Most rain in a DECADE forecast with 40C heatwaves in Perth and Victoria